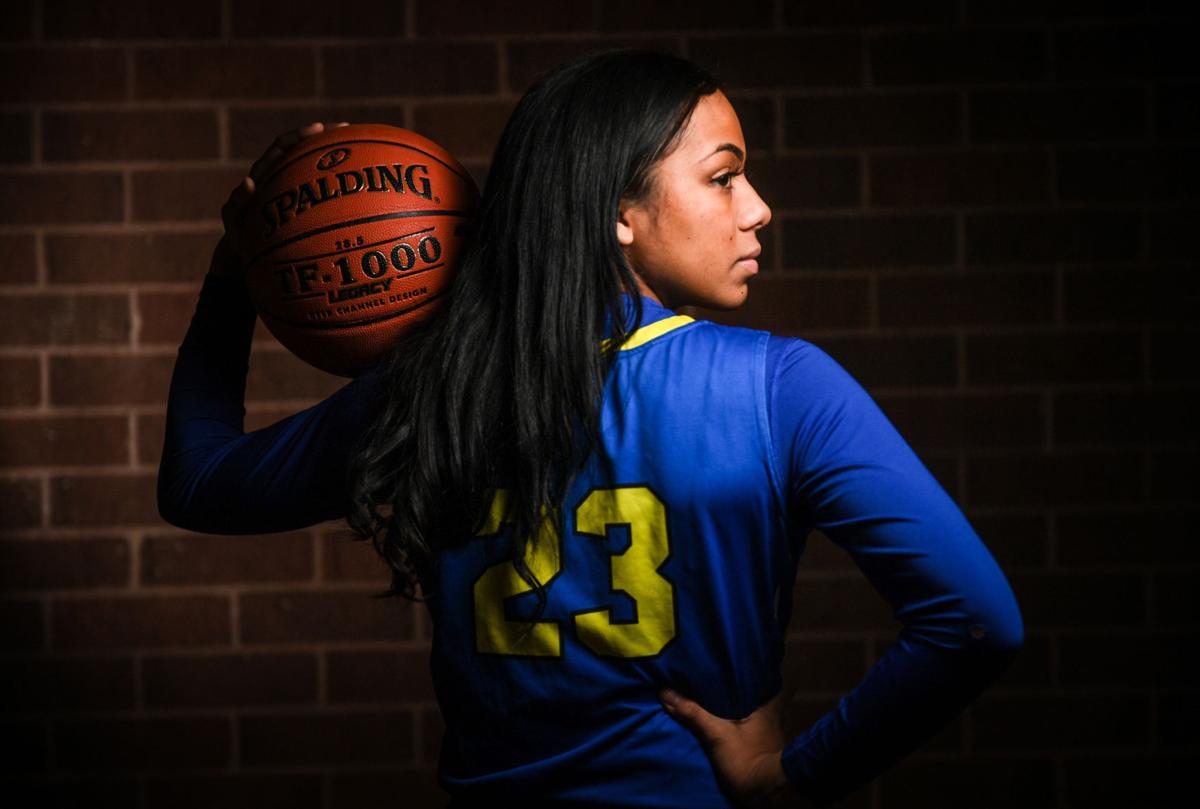 Davenport North senior guard Bella Sims is this week’s Iowa Pacesetter. Sims leads the state-ranked Wildcats in scoring and assists and is second in rebounding. 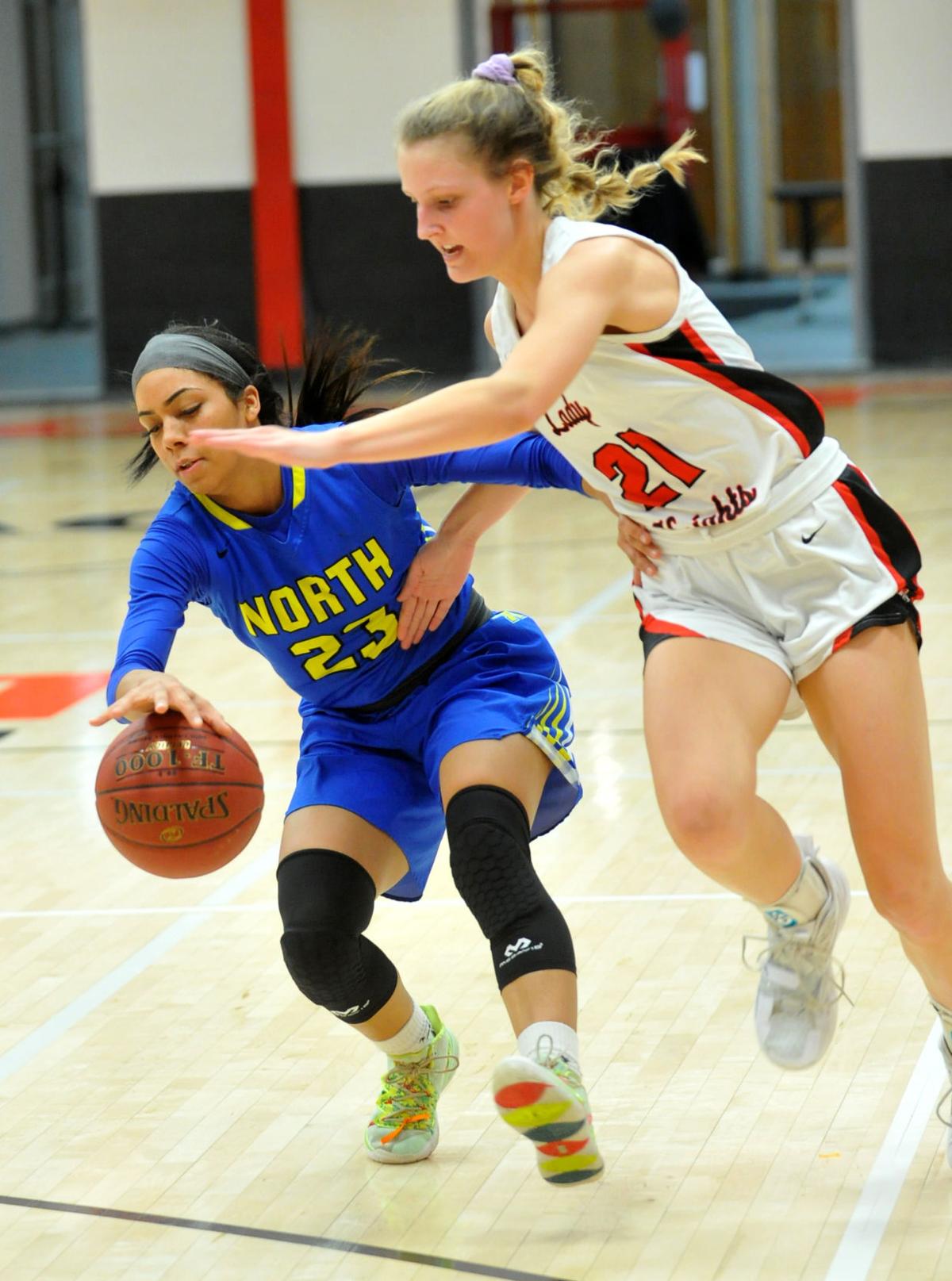 Davenport North's Bella Sims receives pressure from Assumption's Ava Schubert as she brings the ball down court during a game earlier this season.

There’s a word that, sometimes, can get overlooked when it comes to the game of basketball.

It is one of the layers to building relationships with coaches and teammates. It can be gained over time, yet taken away in the blink of an eye.

For Davenport North’s Bella Sims, forming trust allowed for success with her third different head coach, six fellow seniors, her father and a team looking to get to the state tournament for the first time in four years.

This week’s Iowa Pacesetter has left her mark in her three years at North, scoring over 600 points and grabbing over 200 rebounds as a 5-foot-4 point guard. She is second in school history in assists with over 250 while being part of 41 wins entering the Class 5A postseason this weekend.

“I’m proud of just this side of Iowa basketball,” Sims said. “Over here, everyone is good. I have to worry about everyone.”

Sims has been in the top-3 on the Wildcats in scoring, rebounding and assists. The senior right-hander’s shooting percentages have skyrocketed in her final year, clipping at 50% from the field and 42% from beyond the arc.

Sims has always been, in her eyes, an efficient passer. The growth has come from using her peripherals to kick it out to her 3-point shooters in the corners. Balancing scoring and distributing has been a welcoming challenge for her.

“It has to do with my teammates, they know what kind of player I am,” Sims said. “We have a lot of fast people.”

Basketball has been in her life since birth.

Sims remembers holding a basketball at 2-years old. She started playing organized games three years later. She had plenty of influences growing up.

Her father, Alvin, played at the University of Louisville from 1993-97, averaging 11.9 points per game as a junior. He proceeded to play for the Quad-City Thunder in the former Continental Basketball Association in 1998 as well as in eight countries.

Another family member, Jeff McInnis, went to the University of North Carolina and played well enough to be drafted in the second round of the 1996 NBA Draft. McInnis also played for the Thunder and bounced around the NBA, playing for seven franchises.

“I wanted to be just like them,” Bella Sims said.

There was a long period of time where Alvin Sims was not a part of his daughter’s life. Bella estimates there were about 10 years where the only time she would see him would be during short-time visits.

As Bella began to grow up, Alvin was more involved in her life. The relationship has blossomed.

Soccer was the secondary sport for Bella. Her love of the pitch was just as high as her love of the court. Eventually, a decision had to be made on specialization.

“My parents were like ‘We’re going to be spending a lot of money for this Chicago team for AAU. You have to focus on basketball,’” she said.

Bella’s first season of high school hoops was on the Illinois side of the river, playing at United Township. It was a short-lived stay.

As she explored options to transfer, Davenport was the main city. Family already lived there and an added bonus was having a prior relationship with Matt Hoeppner, North’s head coach at the time.

Another perk was the cast of players she was walking into for the Wildcats were the same ones she played with on the AAU circuit.

“We’ve been playing together for a long time,” senior guard Jordan Burch said. “Right away, we trusted her. She’s been great.”

Hoeppner left after Sims’ sophomore year to lead the girls program at West Liberty. So, for the third time in three years, the point guard was getting a new voice.

Paul Rucker has been her most consistent coach. Two years at the helm has led to just six losses. Still, there were times in the beginning when Sims was unsure about the change.

“For Hoeppner, we had a lot of plays and for Rucker, we don’t have a lot of plays,” Sims said. “It took me a while to get adjusted. It took awhile for me to see that his ways work.”

The turning point was a game in February 2020 against Cedar Rapids Prairie, a game the Wildcats won. That was the moment where the trust between the two began to take place at a higher level.

“It took a long time, both ways, to start to gain trust, and that’s just through having daily conversations that don’t always relate to basketball,” Rucker said. “Been blessed to be able to do it with her, but it’s too bad we didn’t start sooner. This year, we have a little bit better feel for each other.”

Sims is hoping to play collegiately. She has not received a single scholarship offer, but Marquette and Ole Miss are interested along with several other schools.

The NCAA’s continued dead period of recruiting has made the process, especially this late in the game, stressful.

“We didn’t get our (AAU) season and it sucks,” Sims said.

Rucker believes because of her athletic ability, she can play anywhere and thrive.

“She can do multiple things,” he said. “A very small percentage of us get to do it. At what exact level? That’s for others to determine. But, there’s no question in my mind she’s going to play college ball somewhere.”

Until then, the focus is on the postseason. North is hopeful for a second straight regional final game, this time coming out on the winning side.

“We’re really ready,” Sims said. “There are some teams we put way more effort in, but this time, we’re not looking at how their season went. We’ll just play our hardest.”

Movie that never gets boring: "Love and Basketball"

Fountain thrives at the point for Lancers

DES MOINES — Its post game was non-existent. Its 3-point shots were rushed. Its final run came too late.

DES MOINES — The shots were short. The pressure was heavy. The postseason magic ran out.

In its first year in the Mississippi Athletic Conference, Central DeWitt won the most girls basketball games, was consistently in the top 5 of…

For Olivia Wardlow, an accidental injury on the diamond turned into wanting to play one more season on the hardwood.

Even without the delays and disruptions to the high school season engendered by the COVID-19 pandemic, the Annawan girls basketball squad was …

Boffeli to be honored with Jack North Basketball Award

Davenport North senior guard Bella Sims is this week’s Iowa Pacesetter. Sims leads the state-ranked Wildcats in scoring and assists and is second in rebounding.

Davenport North's Bella Sims receives pressure from Assumption's Ava Schubert as she brings the ball down court during a game earlier this season.