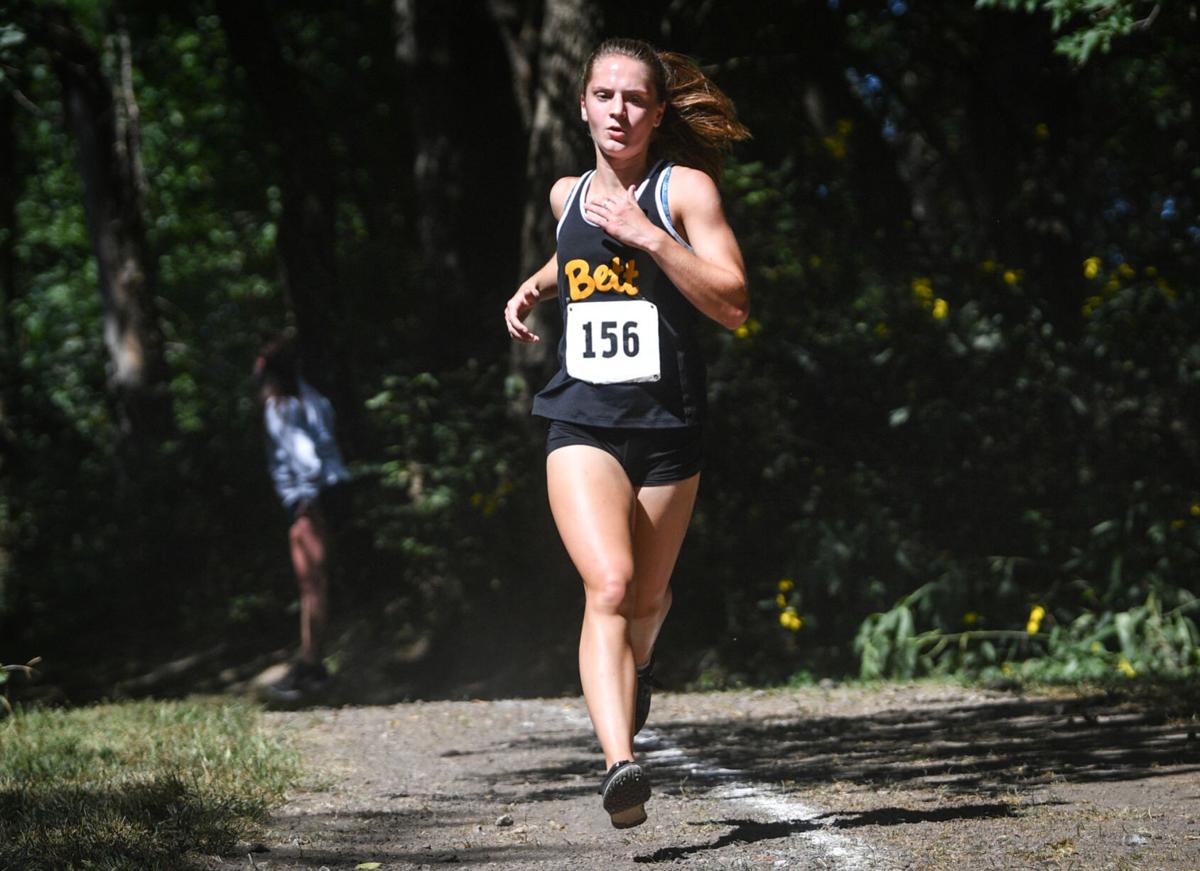 Bettendorf’s Hannah Beintema runs through the trails at Crow Creek Park on Saturday morning in the Spartan Challenge. Beintema won the 5,000-meter race in 19 minutes, 35 seconds. 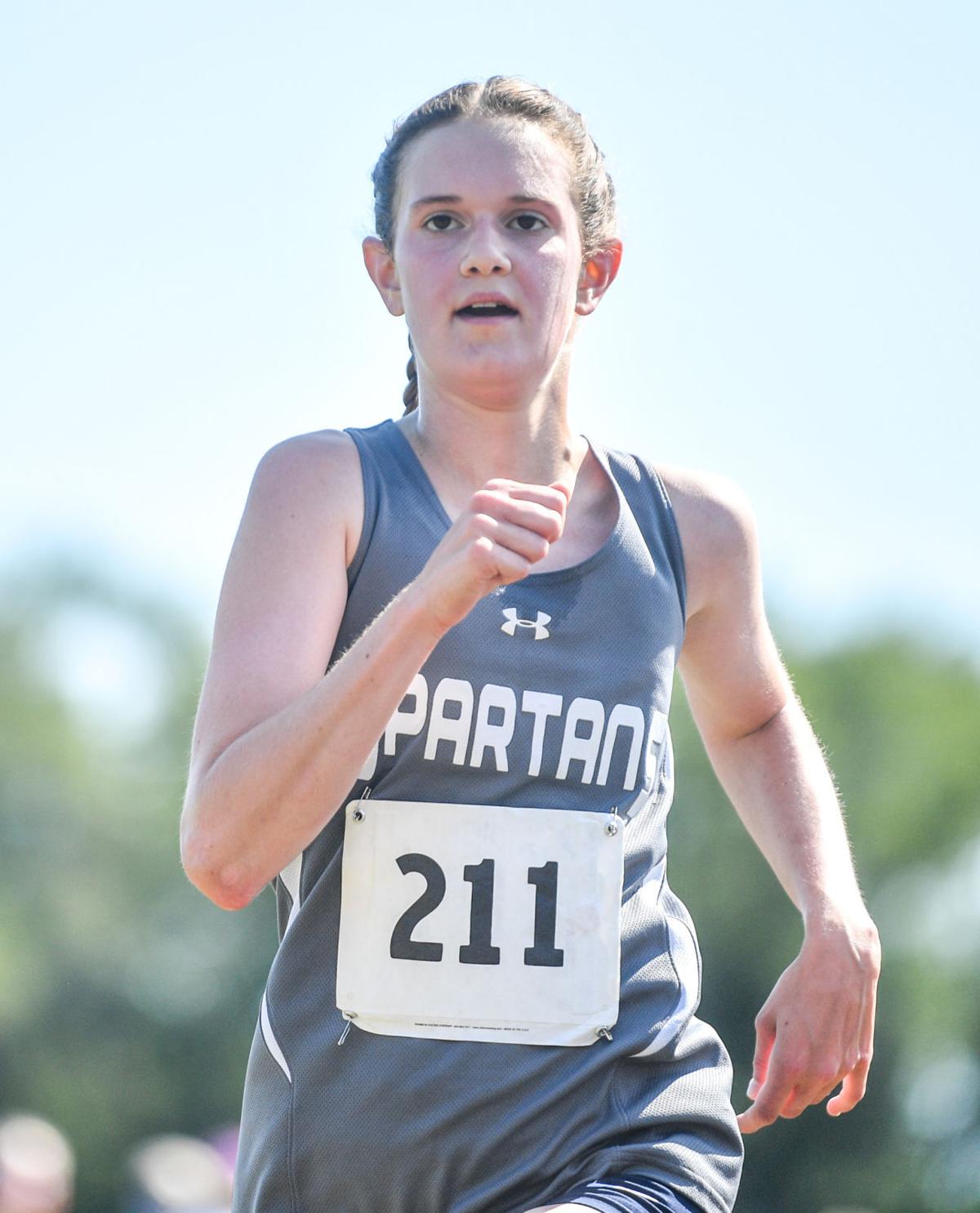 As Hannah Beintema was navigating the three steep hills at Crow Creek Park known as the incinerator, exterminator and exasperator Saturday morning, the Bettendorf cross country runner had a mentality shift.

Initially, Beintema was hoping to finish as the team's top runner and earn a medal. As the 5,000-meter race unfolded, the junior's mindset altered.

"I was telling myself I should never settle," Beintema said. "I started to push it and thought, 'Man, I can win this whole thing.'"

She did just that.

Thanks to a strong close in the final quarter-mile, Beintema knocked off Johnston's Bella Heikes and Dubuque Senior's Lily Schmidt to capture the Spartan Challenge hosted by Pleasant Valley in 19 minutes, 35 seconds.

"Hannah was very patient with her race, kept them in her sights and used her strength," Bettendorf coach Erin Flynn said. "She is that type of runner who stays in the hunt and then strikes that last half-mile.

"She had a good spring and summer of training on her own. This is going to fuel her desire and motivate other kids to support her in that role."

Beintema was the first local girl to win the Spartan Challenge since PV's McKenzie Yanek in 2014. Because of COVID-19, no out-of-state teams participated in the meet.

Still, the win was a shot in the arm for Beintema. She beat six girls that finished in front of her at last year's Class 4A state meet, including Schmidt and Heikes who were in the top five.

"It is definitely a great boost of confidence, but I never want to underestimate these girls," Beintema said. "This is our home course and there is a bit of an advantage being able to train here."

Second-ranked Johnston had four finishers in the top eight to claim the team title with 33 points. No. 7 Dubuque Senior was second at 57, followed by No. 11 Bettendorf at 98.

Teammate Sammy Foht joined Beintema in the top 10 with a ninth-place finish in 20:58.

"Despite the nerves at the start, it was great to get out there and race again," Foht said. "To start as far back as I did, I was pleased to work my way up."

Freshman Emily See was 17th, but the Bulldogs had an 80-second separation between her and the No. 4 finisher.

Flynn believes that will dwindle as the season progresses.

"We anticipated there would be a gap, but if those girls continue to be patient and stay healthy, they'll close that gap," Flynn said. "They're all athletes and all competitors."

Beintema is the reigning Mississippi Athletic Conference champion and parlayed it into a strong finish to the 2019 season.

She admitted this might have been any even bigger victory given the offseason and high level of competition.

"The MAC meet was definitely huge, just my second win, but this year, especially after what everyone has been through, how hard and unmotivating it has been to train, this was special," she said. "In the end, it was all glory to God. He definitely helped me through all of it."

Pleasant Valley finished fifth with 112 points. The Spartans had five in the top 31, led by sophomore Bella D'Antico's seventh-place finish in 20:25.

D'Antico is healthy after battling iron deficiency the second half of last year.

"I'm in a much better spot nutritionally and feel a lot stronger," D'Antico said. "It was difficult and disappointing, but it was just my freshman year and in the long run it didn't matter that much.

"I had no pressure going into this because I had no expectations, didn't have any goals or any limitations. I went out and gave it my all."

Bettendorf’s Hannah Beintema runs through the trails at Crow Creek Park on Saturday morning in the Spartan Challenge. Beintema won the 5,000-meter race in 19 minutes, 35 seconds.