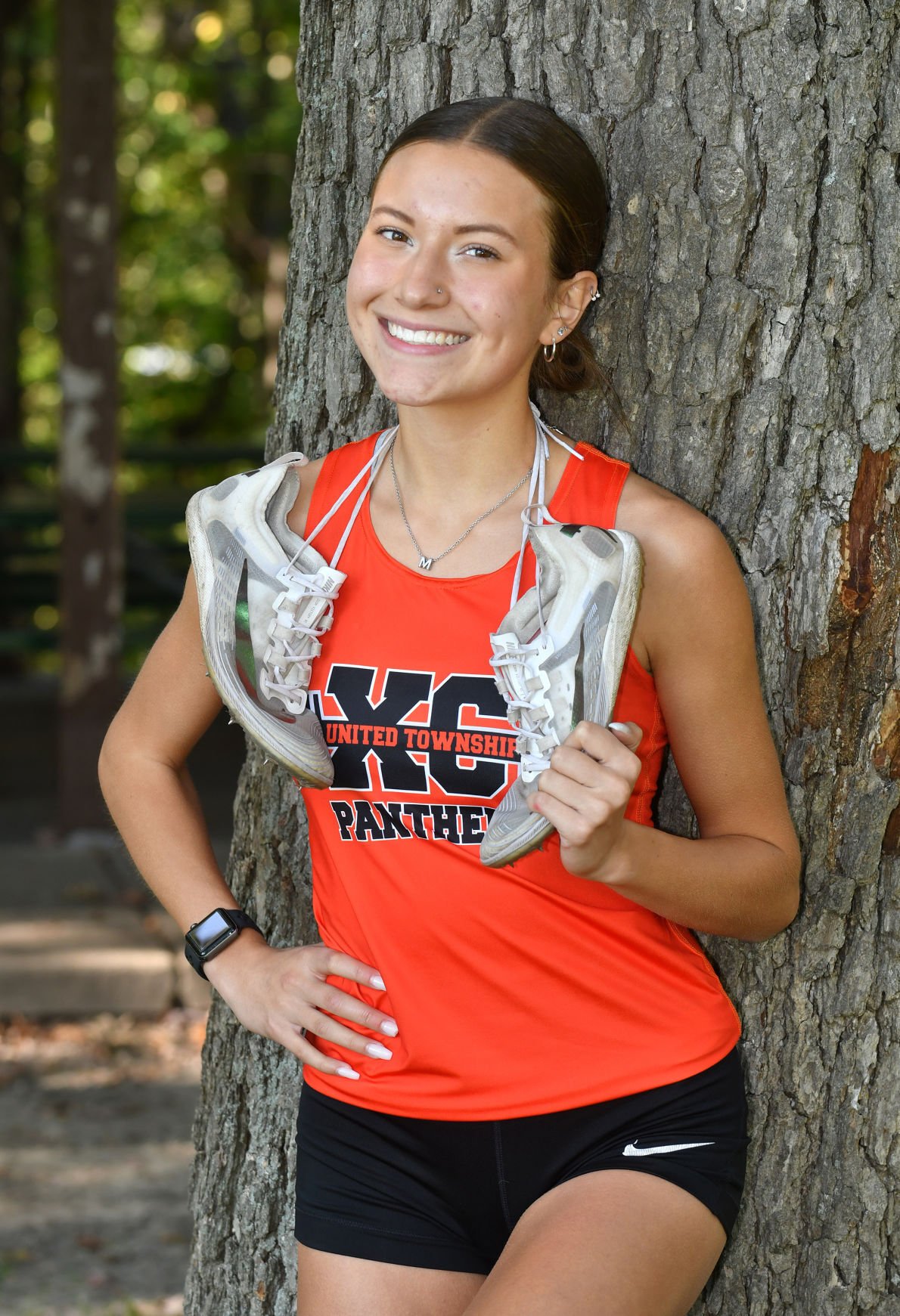 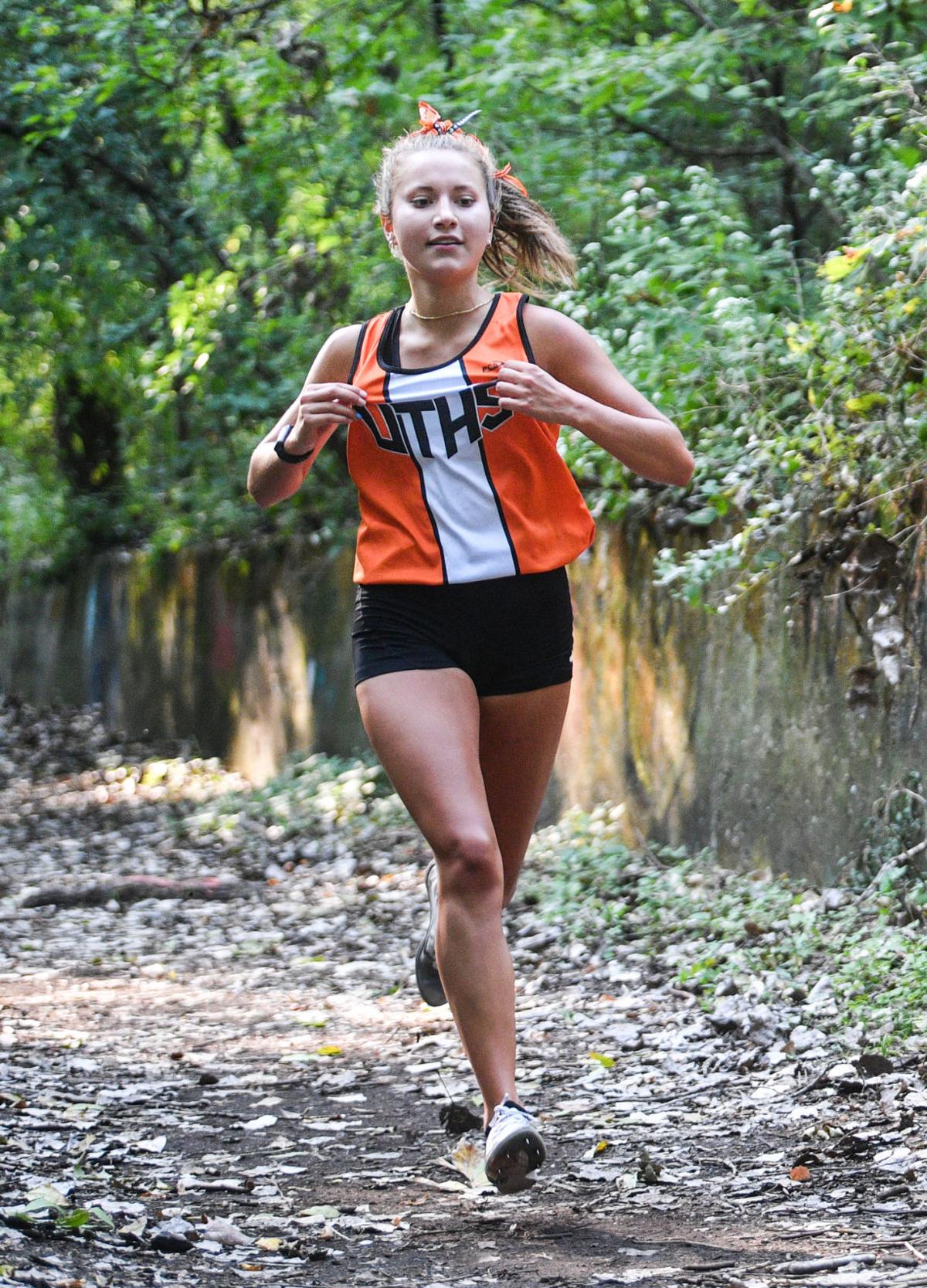 United Township High School senior Maddie Miller has become accustomed to running alone in front of the pack during races. Here she holds up her jersey as she makes her way to the finish line during a race on Sylvan Island last fall.

If you have attended a United Township High School cross country event this season, there is good chance you saw Maddie Miller at the front of the pack.

And it’s not by accident. She’s been doing it since she was in sixth grade.

“That’s when I kind of realized this was something I would like to pursue,” Miller said. “As a sixth grader, I won the conference meet in middle school. And so I continued to run cross country. And then I was introduced to track & field. And so I just kept on running.”

For her opponents, they would likely use the word sprinting. This week’s Illinois Pacesetter has already won four events this fall and placed second twice. She also set a personal best with a time of 18:21.8, a feat that was accomplished on Aug. 31 at the Moline Invitational, in the pouring rain. Mud and puddles two feet deep covered the course.

“Going into that race, I had a lot of doubts,” Miller said. “The weather definitely contributed to those doubts. And I knew I was going up against some of the best girls in the conference. I was pretty nervous. But at the end of the day we were all running in the same conditions. So I had to just lay it all out there and run as fast as I could.

“About five minutes after I’d finished I was in complete shock. It was just a really memorable moment for me because I’ve never ran that fast before. I mean, I knocked about 40 seconds off of my time. It was great.”

After setting her PR freshman year, Miller said that she felt like she plateaued. That is, until coach Tony Vandewalle came aboard this season. In that short time, he has helped Miller increase her weekly mileage from 25 to 40. A rare accomplishment for a young runner.

“If you want to be successful, you have to put the time in,” Vandewalle said. “But a lot of people don’t do that, they’re not willing to put the time in. I’ve had a few over my past 20 years of coaching, but I’m getting fewer and fewer. I always tell her she’s kind of a dying breed. She has spent a lot of time getting better.”

Miller was introduced to cross country at a young age by her grandpa, Joe Moreno. He is a top race director in the Quad-Cities area who organizes races such as the East Moline Firecracker Run, Trinity Freedom Run 5K, TBK Bank Quad Cities Marathon and Ganzos Cinco de Mayo 5k. That got Miller involved with the running community at a young age.

But it’s not just her running ability that makes her so special. She has proven to be one of the best cross country runners in the Western Big 6 Conference, but Miller also spends a lot of her time with clubs and academics.

“I want people to know that I'm more than just an athlete,” Miller said. “I think it’s awesome that I'm so involved in school. I get to be an FCA leader and I represent FCA as a cross country runner. It's so amazing to speak to the FCA leaders and other FCA students and let them know that you can be more than just an athlete, you can be a leader within the Christian community. It’s really awesome.”

The senior runner wants to major in sports psychology when she attends college next fall. It’s something she says has been on her mind since the pandemic.

For athletes, the mental part of the game usually takes priority. Miller says that is true for cross country as well — especially when running by yourself.

“Running is definitely a mind game,” Miller said. “You have to have a strong mind in order to be a good runner. Every day of practice I have to really push myself while I’m out there. Since I’m running alone, I can’t slack off. I have to stay focused during practice and act like it’s a race.”

Running alone has been a common theme for Miller this season. She is the fastest on her team, so Vandewalle says she doesn’t have a true running partner. Not to mention that her biggest change this season has been her strategy, getting ahead early during the first mile instead of running with the pack.

“I think her training has given her a lot of confidence and winning has definitely been contagious for her, she likes it,” Vandewalle said. “She likes running from the lead now and I think the combination of the work she has put in plus the success she has seen has made her really comfortable.”

All of Miller’s hard work paid off during the Western Big 6 meet in Sterling on Thursday. Miller placed second with a time of 19:04.8. It was her highest finish ever in the conference meet.

This has gotten the attention of college coaches. Miller is still undecided where she will continue her running career, but says she is interested in the University of Illinois Springfield, Western Illinois and Iowa Central.

But before Miller can focus on college, the most important high school races are just a few weeks ahead.

Vandewalle believes Miller will reach state, but it all begins with the regional meet at 10 a.m. Saturday at Empire Park.

“Regionals are going to be very exciting,” Miller said. “It's at our home course so we're trying to get as many UT fans out there to come and support us as possible. I think it's going to be a great day and great weather. I'm excited to show up and race for me and my teammates.

“I definitely don't want to take these last few races for granted. I want to PR, if that's possible. And I would just like to keep on qualifying for the next meet. And I think with God by my side, I can do all of those things.”

If you could live anywhere: Italy

United Township High School senior Maddie Miller has become accustomed to running alone in front of the pack during races. Here she holds up her jersey as she makes her way to the finish line during a race on Sylvan Island last fall.