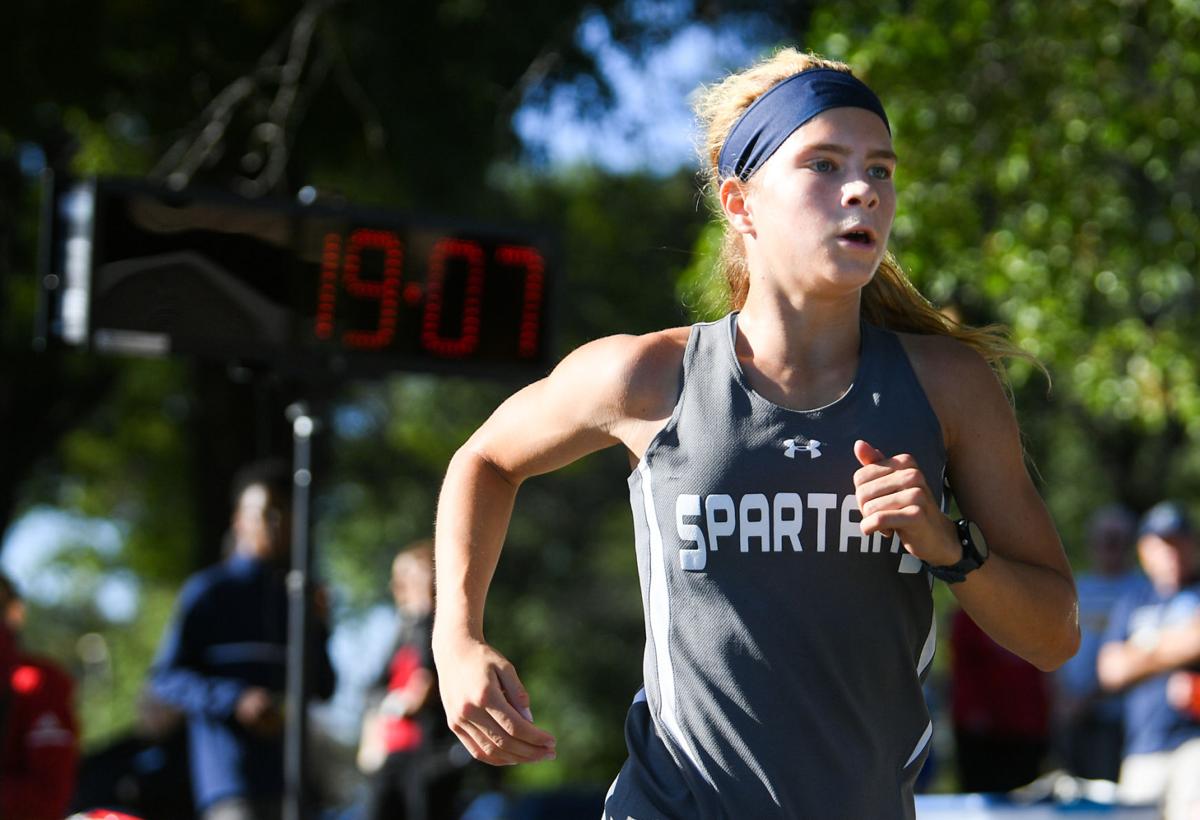 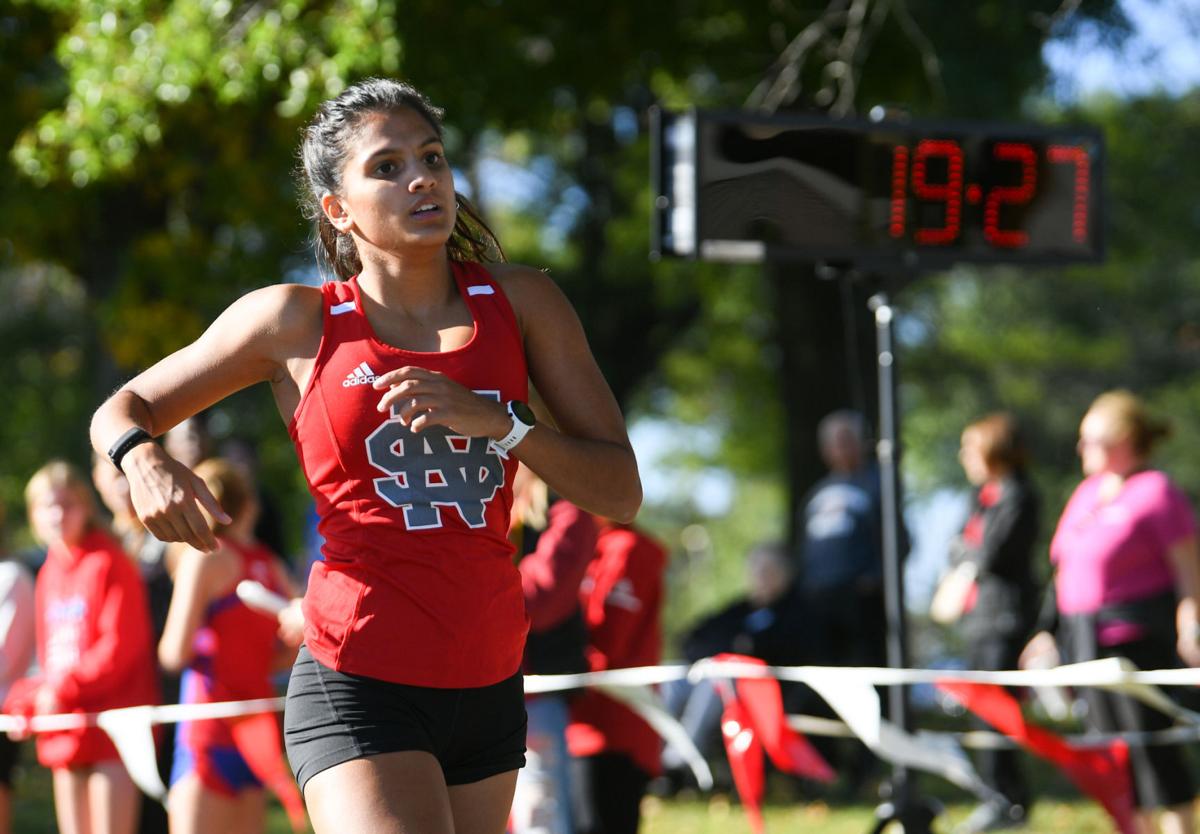 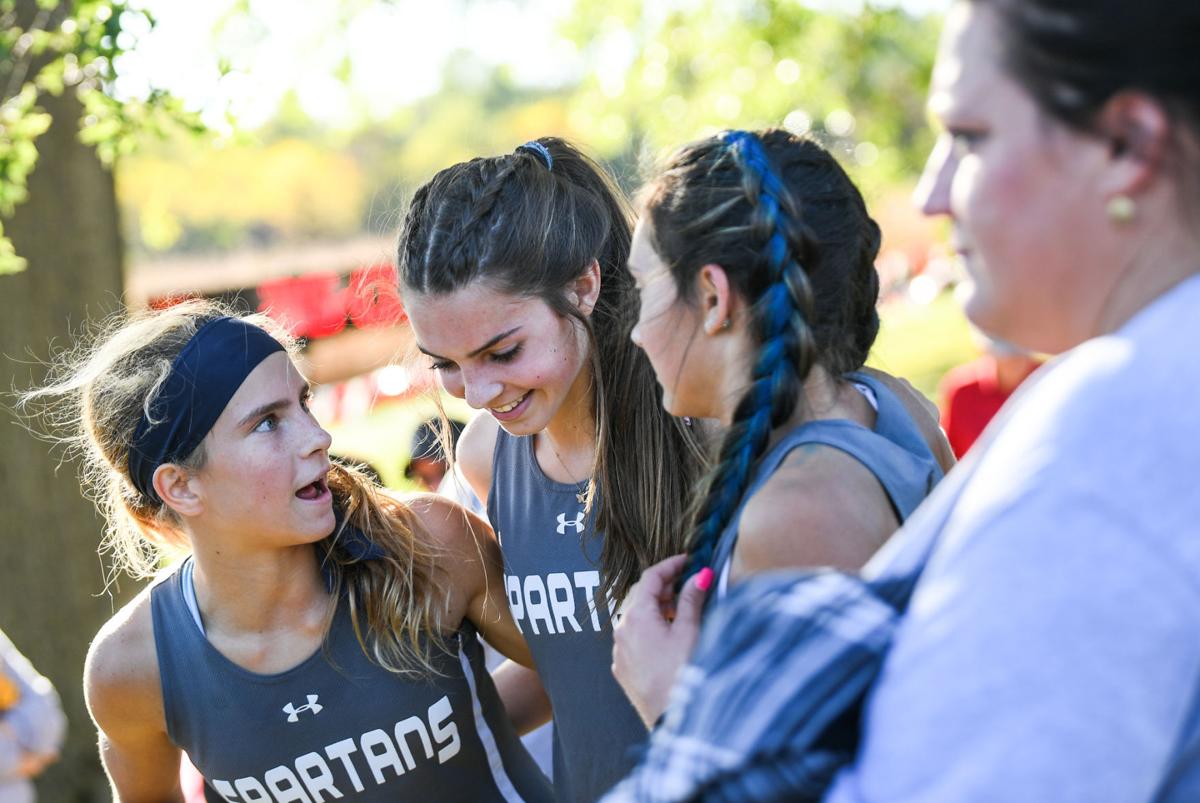 Pleasant Valley’s Grace Boleyn, left, and teammates Lizzie McVey and Josie Case talk after the conference race earlier this month. Boleyn and the Spartans vie for a Class 4A state championship this weekend in Fort Dodge.

"My strong suit is usually on those inclines," she said. "I have a second reserve compared to some of the other runners and my legs aren't that fatigued going up those inclines."

Boleyn, a freshman and the top-ranked runner in Iowa Class 4A, seized control of Thursday's Mississippi Athletic Conference meet in the second mile at Scott County Park and went on capture the individual title in 19 minutes, 5 seconds.

With teammates Lizzie McVey and Josie Case right behind, No. 1 PV earned the title of MAC champions for the fourth time in five seasons with 33 points. North Scott was second at 69 and Bettendorf third at 92.

The second mile is the hilliest on the course.

"I do a lot of weightlifting so that definitely helps," Boleyn said. "When I see hills, I'm not scared or worried about them. I look for hillier routes when I'm doing mileage so I can prepare."

Ever since a win over state-ranked Dubuque Hempstead at the Jim Boughton Invitational in Dubuque last month, PV has been on a tear. This was the fourth victory in a row for the Spartans heading into next week's state qualifier at Crow Creek Park.

McVey and Case have solidified themselves as the team's Nos. 2 and 3 runners. Lexi Minard and Lydia Sommer had top-15 finishes to round out PV's scoring.

"Since the Dubuque meet when they had their little breakthrough, their confidence has grown each week," PV coach Jane Wheeler said. "In the past, I've had to convince my girls a lot how good they are. This group, not in a conceited way, have the thought, 'We can do this. Let's see how fast we can go.'"

McVey finished in 19:16 and Case passed North Scott's Faith Nead at the very end to take third in 19:25.

The Spartans have tightened their pack since the start of the season.

"As the meets have gone along, we've gotten closer and closer," McVey said. "We're working up to our No. 1. It really helps push us to have a really good girl like Grace on our team."

North Scott's Amy Knoche was voted as coach of the year. Besides Nead, Bailey Boddicker placed in seventh for the Lancers.

"It was a really good race," Nead said. "It was nice having those PV girls to race against. (My plan) really was just to stick with them."

With five runners in the top 30 overall, Tipton reclaimed its place as the top Class 2A boys cross country team in Iowa on Saturday.

Pleasant Valley’s Grace Boleyn, left, and teammates Lizzie McVey and Josie Case talk after the conference race earlier this month. Boleyn and the Spartans vie for a Class 4A state championship this weekend in Fort Dodge.