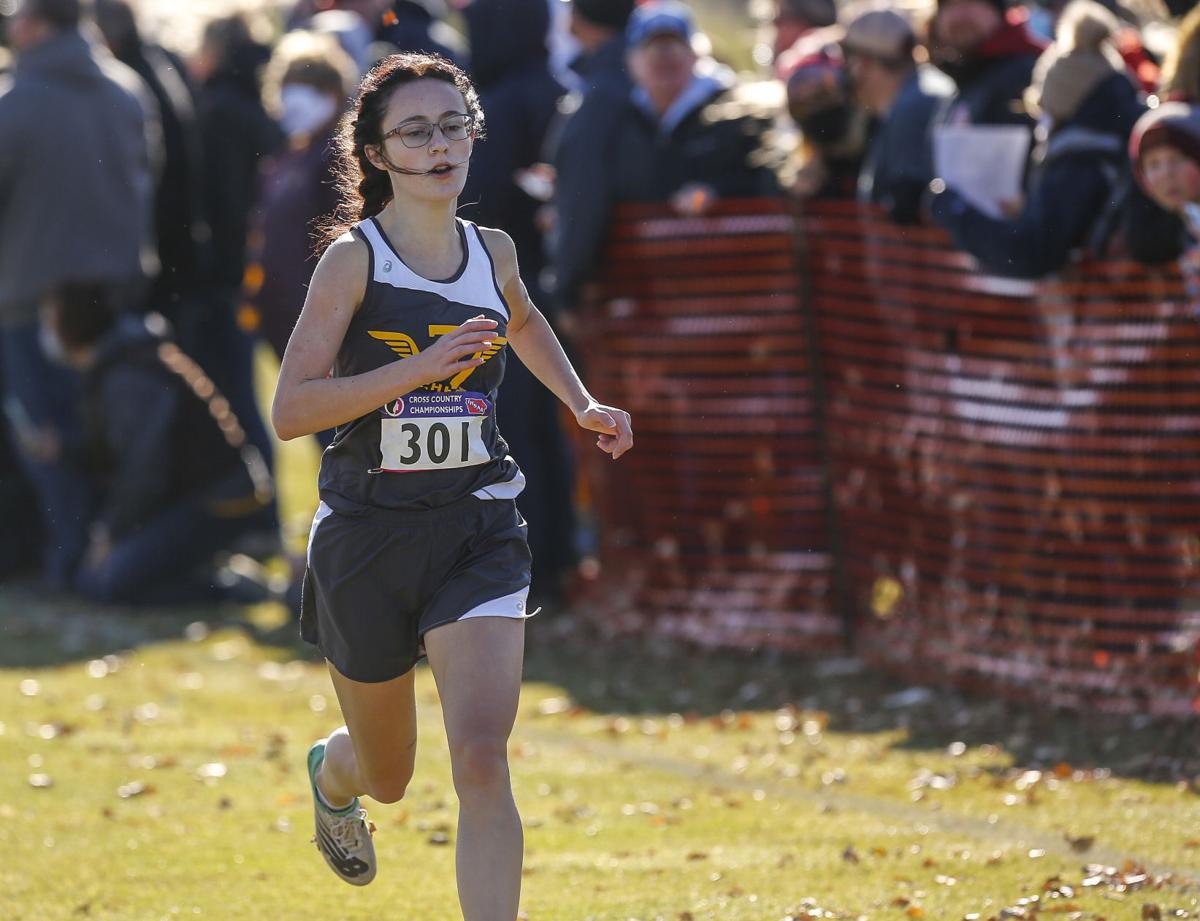 Kallie Wallick led the Tipton girls to second place this fall at the Iowa Class 2A state meet. Wallick was the Tigers' No. 1 runner all season, including a 16th-place finish at state. 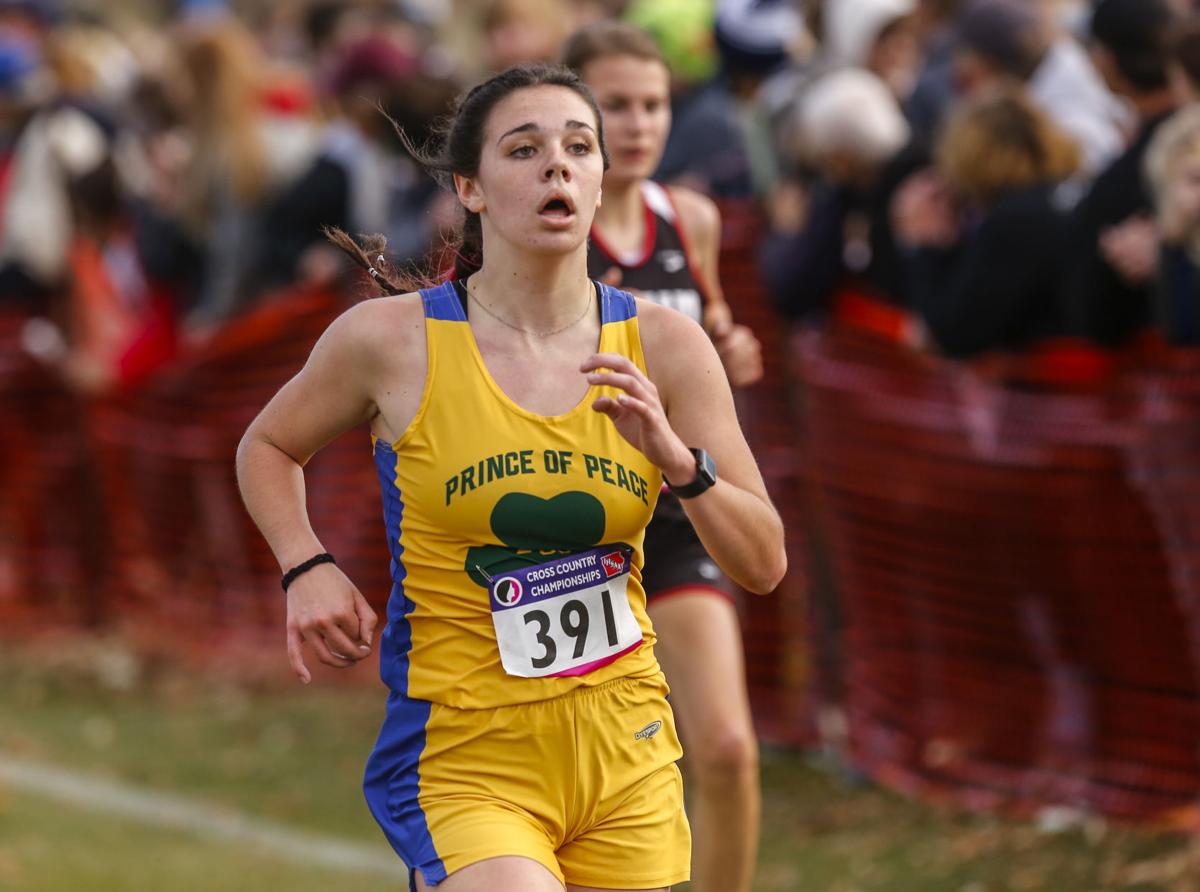 FORT DODGE — Neither the stage nor the moment got too big for Tipton’s girls cross country team Saturday morning.

Even with four freshmen among the Tigers' top five runners, facing the best of the best didn’t faze them.

“We all like each other,” freshman Alivia Edens said.

And that camaraderie helped them bring home a state trophy.

Ignited by all five in Tipton’s lineup finishing inside the top 45, the Tigers captured second place in the Class 2A team race with 107 points at Lakeside Municipal Golf Course, 12 clear of third-place Williamsburg.

“I can’t explain how proud I am, I can’t express how good it feels,” senior Kallie Wallick said. “(The freshmen) were all really nervous at the start and they showed up.

“This is the best I’ve felt. I want to leave a legacy behind.”

Mid-Prairie broke its own scoring record with 45 points, carried by champion Danielle Hostetler and three others in the top 11.

After starting the year ranked 11th by the Iowa Association of Track Coaches and slipping to 14th at one point, the Tigers slowly crawled up the rankings each week and entered the state meet ranked third, firmly in position to nab a trophy.

A strong pack in the first mile, with four in the top 30, paved the way for a successful finish. By the second mile, Wallick gained separation, but Edens and Rebecca Hinderaker were close together.

“We all kind of have staggered starts, me especially starting off a lot slower,” Wallick said. “Some of the freshmen start off a little faster. Usually, we’re pretty good at staying with each other.”

By the time Wallick (16th in 20 minutes, 31 seconds), Edens (20th in 20:39) and Hinderacker (24th in 21:02) crossed the finish line, the Raiders' third runner had yet to finish. Junior Alyssa Mente and freshman Addie Nerem, Tipton’s fourth and fifth runners, finished well before Williamsburg’s fourth.

It ignited a celebration.

“They put it together at the right time,” Tigers coach Eric Walsh said.

When the year began, Tipton experienced tough sledding. No one was in great shape, causing some to stop after two miles during practice.

Over the last month, it began to hit its stride.

“We hit the halfway point of the season and I think that’s when we really began to shine,” Wallick said.

Since Wallick is the only one graduating, next year’s Tipton squad is hopeful to be in the exact same position, although Edens admits catching the Golden Hawks will be difficult.

“I don’t think we can catch up with them,” she said.

Clinton Prince of Peace entered Saturday ranked 13th in the Class 1A team rankings. It bettered that by four places.

Led by senior Maddie Anglese's 44th-place finish, the Irish placed ninth with 216 points. Their Nos. 2 and 3 runners placed inside the top 75.

With four seniors in the lineup, experience played a factor. In 2019, Prince of Peace finished 15th out of 15 teams.

After falling to Northeast by three points at the Jim Hetrick Invitational, the Irish responded with a second-place finish at the Tri-Rivers meet and the state qualifier in Cascade.

“We definitely know that we had it in us, it was just a fluke in the season and we could keep pushing harder,” Anglese said. “We just want to achieve all our goals. This year was just over the top.”

North Cedar’s Hunter Jones, a medalist a season ago, finished 24th in 20:51. Her explanation for dropping 13 places and one minute slower was a simple one: The blustery winds throughout the course.

“It was really bad," Jones said. "It just gets a lot harder to breathe.”

Nobody on the Pleasant Valley High School boys cross country team was born the last time the program failed to qualify for the state meet.

United Township's Maddie Miller has already won four races and placed second in two others, but her biggest accomplishments - before college at least - still lie ahead of her.

The Moline girls cross country team as well as two individual boys runners advanced to sectionals. UT will three to sectionals next weekend in Quincy.

ROCK FALLS — Saturday was a day of firsts for the Riverdale boys' cross country squad and its top runner.

Of all the Class 1A cross country regional meets around Illinois, the gathering at Rock Falls is widely regarded as one of, if not the, toughe…

Kallie Wallick led the Tipton girls to second place this fall at the Iowa Class 2A state meet. Wallick was the Tigers' No. 1 runner all season, including a 16th-place finish at state.