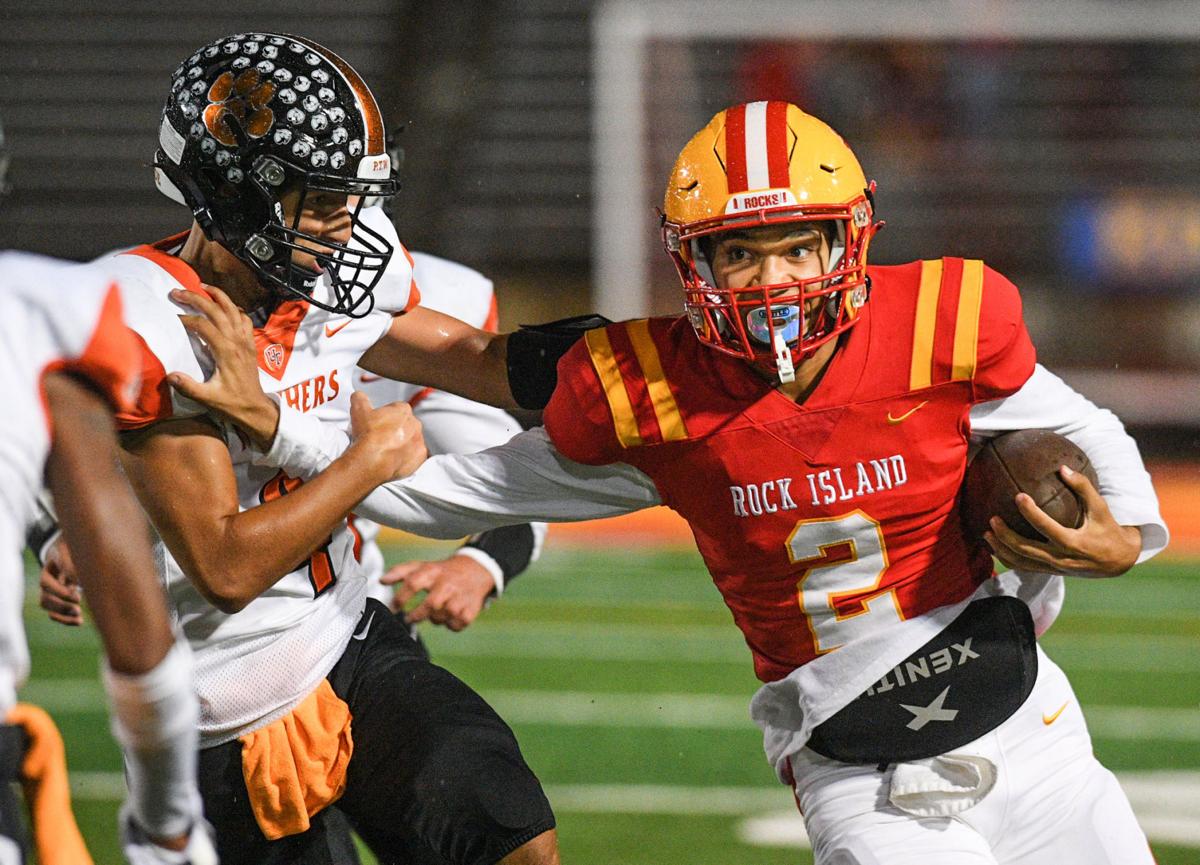 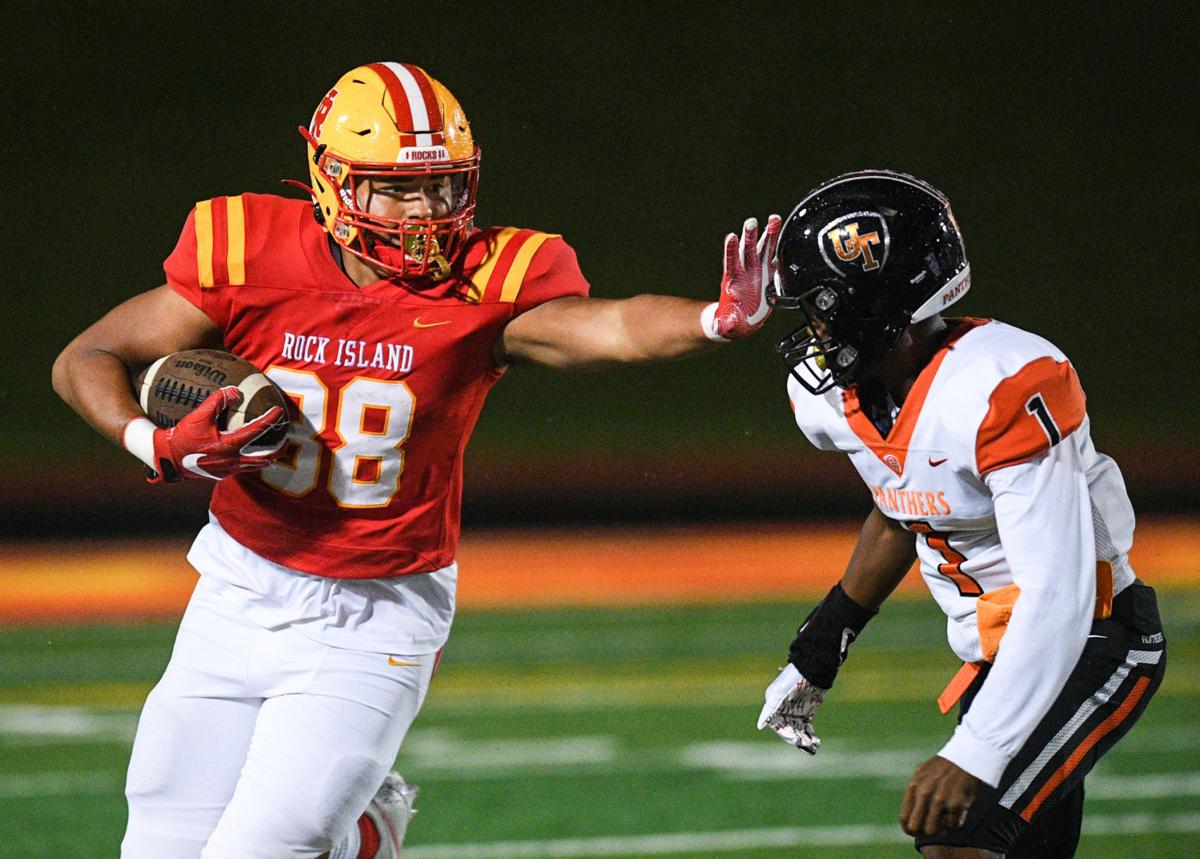 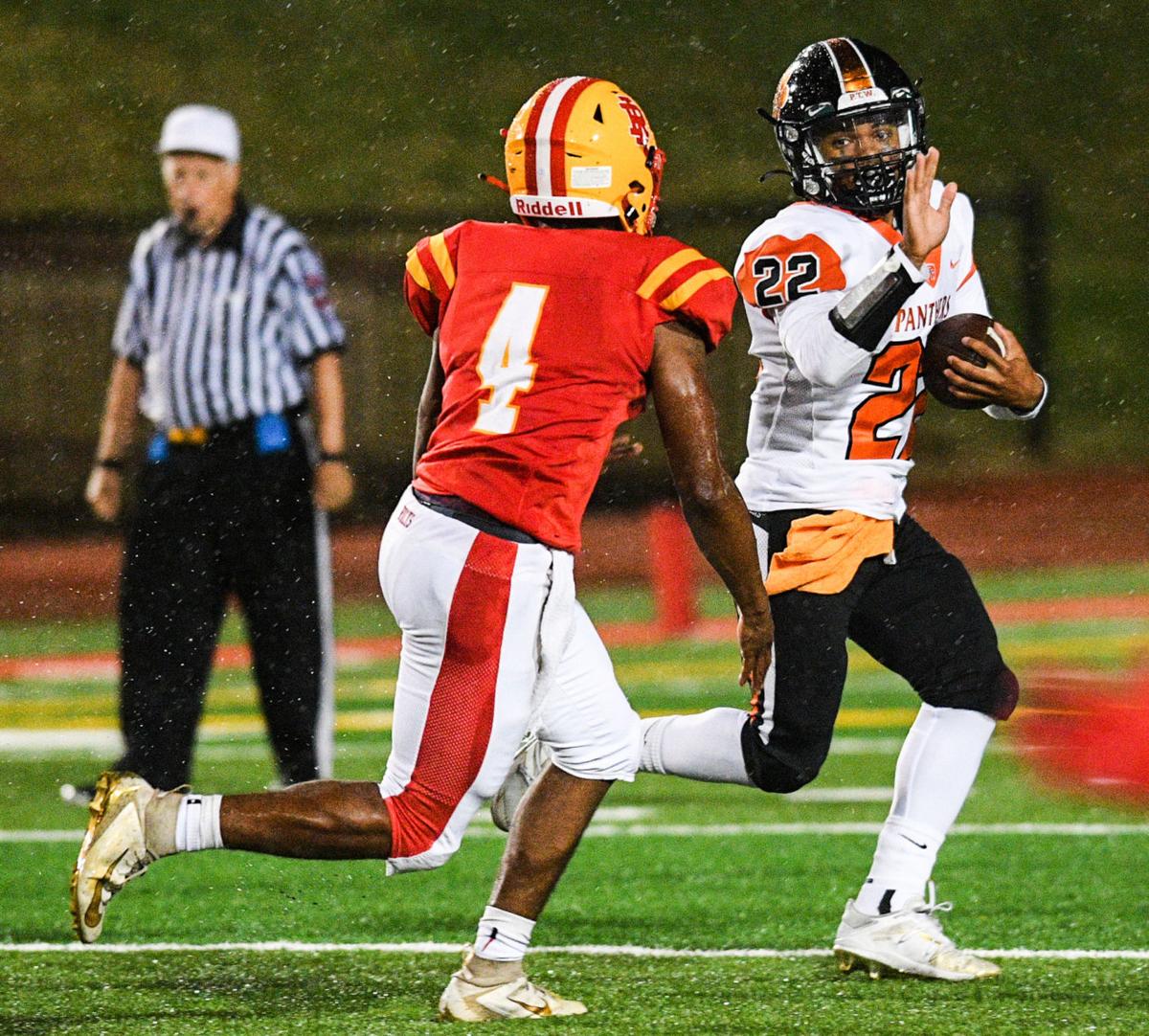 A heavy downpour engulfed the stadium for much of the first half, but it didn’t bog down Rock Island in its 40-6 victory of the Panthers at Public Schools Stadium.

It was the bounce-back game Rock Island needed as senior quarterback Eli Reese threw for 180 yards and five touchdown passes. Marieon Anderson had two catches for 50 yards and two scores and junior running back Quonterrion Brooks had 83 yards rushing and 49 yards receiving, including a touchdown.

“It was fun,” Reese said. “I threw a touchdown to four different receivers. It was great to get everyone involved. It’s fun to move the ball down the field and score. It’s definitely a big bounce back, especially mentally. It gives us confidence going into next game and for the rest of the season.”

After a 63-0 loss to Moline the game before, even Rock Island coach Ben Hammer couldn’t emphasize enough how important it was to come out strong against UT.

“After every loss, a win is a great way to bounce back,” Hammer said. “We are going to use the Moline game to motivate us the rest of the season. It left sours tastes in our mouths, my mouth, and for our community and school. Our kids heard about it a lot and want to finish strong and make a playoff run.”

Rock Island made sure to wash the taste away with two touchdowns less than a minute.

With the Rocks leading 7-6 on a water-filled turf field, the Panthers had the ball inside Rock Island’s 5-yard line, about to take the lead with four minutes before halftime.

However, Rock Island stuffed UTHS senior running back Loren Arrington at the line on third-and-goal and then sophomore quarterback Matthew Kelley overthrew a pass to sophomore receiver Korey Randle on fourth down to give the ball back to the Rocks.

Rock Island (3-2, 2-1 WB6) rattled off a 10-play, 96-yard touchdown drive to take the lead with 58 seconds before half. More than half the yardage was gained on a screen pass from Reese to Brooks, who broke away for the 49-yard score. Brooks caught the pass near the line of scrimmage, but had two blockers in front of him that allowed him to easily get 15 yards up field. Yet it was Brooks’ breakaway speed and spatial awareness to run at an angle that got the running back to the goal line before being tackled from behind.

“We were managing the clock to try and get down to get some points, either a field goal or a touchdown,” Hammer said. “Then on that tailback screen, (Brooks) is just a phenomenal athlete and comes from a long line of athletes so that was great. It was a huge momentum swing.”

The score put Rock Island ahead 14-6 with little time remaining.

UT’s next drive was just as costly.

The Panthers (3-2, 1-2 WB6) ran out of bounds on first down, and followed that with two incomplete passes, stopping the clock each time. A short 17-yard punt followed, giving Rock Island the ball back at UT’s 43 yard-line with 31 seconds left.

That was more than enough time.

Reese connected with senior tight end Kai Rios for 27 yards on first down and Brooks followed with a 14-yard rush. After a negative run play on second down, the Rocks converted on third down with a slant pass in the end zone from Reese to sophomore receiver Joe Allen from 5-yards out.

All of a sudden, Rock Island had a 21-6 lead with seven seconds remaining in the half.

“That was big,” Reese said. “Coach Hammer made some big calls. I’ll give all the credit to coaching. Things kind of fell into place.”

Junior running back Darius Tongo ended the scoring with a 20-yard touchdown run to the right side to make it 40-6 with 5:39 left in the fourth quarter.

Before Rock Island ran away with the game, UT got on the board first with an impressive drive to begin the game. Senior receiver Demahz Slater caught a pass well behind the first down marker, but broke a tackle and ran parallel to the 50-yard line to create space before cutting back up the field and breaking at least four tackles on his way to the 30-yard line. A facemask penalty put the Panthers at the 15-yard line.

Three plays later on fourth down, Rock Island committed a penalty away from the ball on an incomplete pass. That gave UT another chance at fourth down, and Randle took care of business from there.

Out of the wildcat formation, Randle took the snap on fourth down and converted with a three-yard run. On the next play, Kelley handed it off to Randle on the right side and the sophomore waltzed into the end zone untouched. The PAT was blocked, but the Panthers took a 6-0 lead with 4:52 left in the first.

Rock Island responded early in the second quarter after a defensive stop in its red zone and put together its first touchdown drive in two weeks. Senior Xander George broke off a 29-yard run up the middle to set up the Rocks in scoring position. Two UT penalties put Rock Island inside the 10-yard line and on fourth down Rios was left open in the middle of the field for Reese to find for a nine yard score.

The second half continued to go Rock Island’s way.

The Panthers had a chance in the third quarter after the Rocks fumbled a snap while trying to punt, but failed to capitalize. Kelley threw an interception on first down and then Rock Island responded by putting together another touchdown drive, this one ending with a 25-yard touchdown catch from Reese to Marieon Anderson.

With the Rocks leading 27-6 late in the third quarter, the rainy conditions were still a factor. Kelley was scrambling to his left, but the ball slipped out of his hands and Rock Island recovered at UT’s 13-yard line.

On the following drive, one of the best catches of the season was made. After Reese was sacked on third down, the Rocks were stranded with a fourth and 21. Reese rolled to his right and threw a strike to Anderson, who was being tackled in the end zone. A flag came out before the ball even reached Anderson’s hands, but the senior receiver snatched the ball while half his body was on the ground for the 25-yard score.

“It was an incredible catch,” Hammer said. “It was well defended, but Marieon is a great athlete, a two-sport athlete. He did an awesome job. I think it was important for his confidence because he had a little bit of a tough game last week, but he’s one of the better athletes in the conference. He was also the homecoming king.”

“I haven’t seen many catches like that,” Reese said. “It got me hyped. It got all of us hyped. We definitely got excited about that one.”

That touchdown earned Reese and Anderson a cozy seat on the bench to watch the rest of the game.

Toward the end of the fourth quarter UT sophomore linebacker Trent Roberts went down with a serious injury. He was taken off the field on a stretcher. His condition or injury is unknown at this time. Coach Hammer offered his thoughts and prayers to Roberts and his family after the game. Both coaches were around Roberts when he was taken off the field.

United Township will return to the gridiron at 7 p.m. Friday, hosting Moline and the Soule Bowl.

Rock Island is at Galesburg at 7 p.m. next Friday.

Lena-Winslow's trick is no treat for Fulton 57-38

Lena-Winslow took control early and methodically pulled away to beat Fulton 57-38 on November 24 in Illinois football.

Asked what Tolono Unity’s berth in the state championship game would mean to Jordan Reinhart, LeRoy coach B.J. Zeleznik replied, “Oh man, he would have been ecstatic.”

Illinois Pacesetter: Moline quarterback Alec Ponder is known for his arm talent, but his personality and willingness to win are huge reasons why Moline is 9-1. Read more about the Maroon QB here:

The River Hawks face a difficult challenge in CAM quarterback Lane Spieker, who has rushed for more than 3,200 yards and 69 TDs this fall.