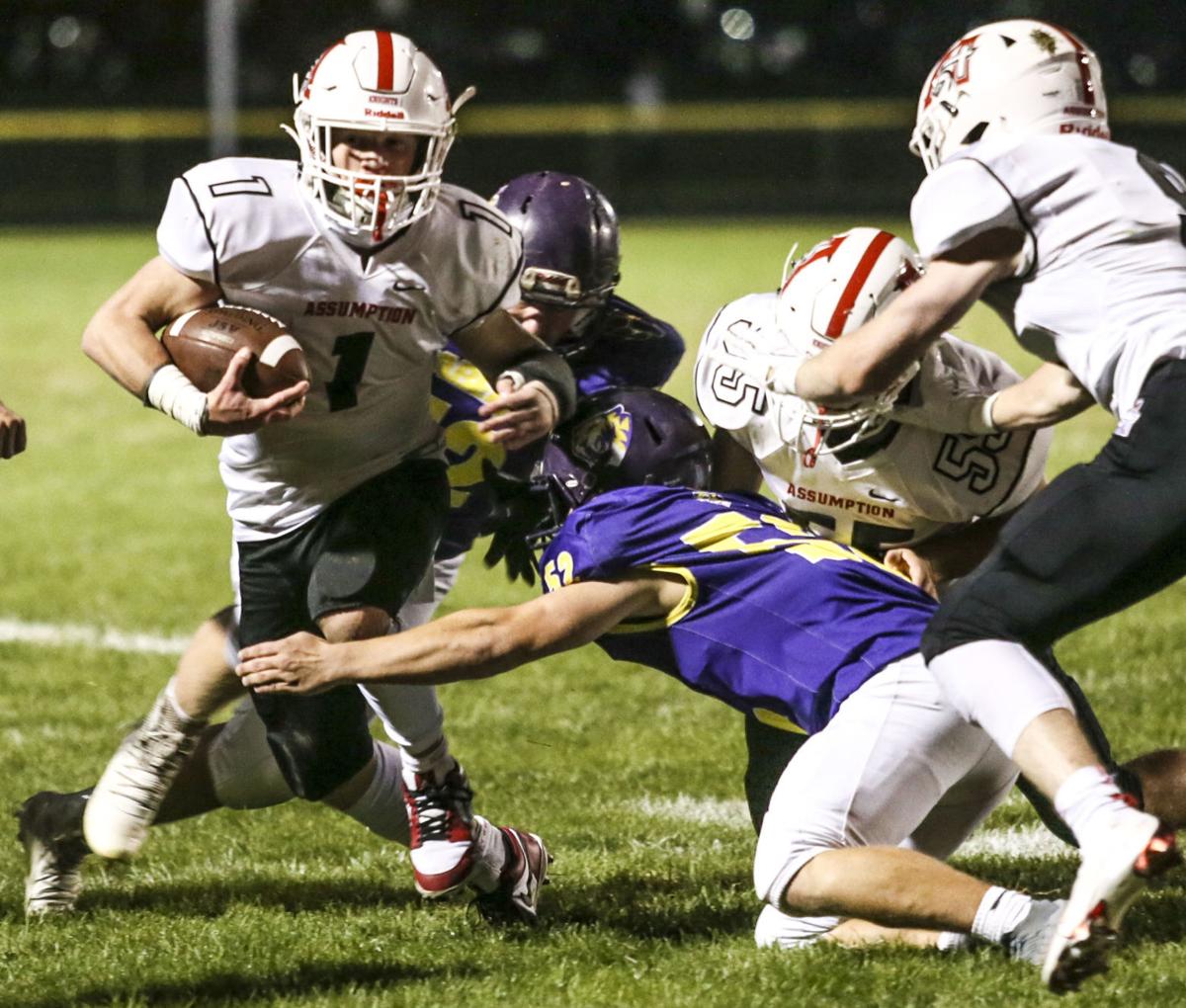 Assumption's Dayne Hodge attempts to elude the Central DeWitt defense during a 31-6 victory Friday night. The Knights will travel to Cedar Rapids Washington on Saturday afternoon. 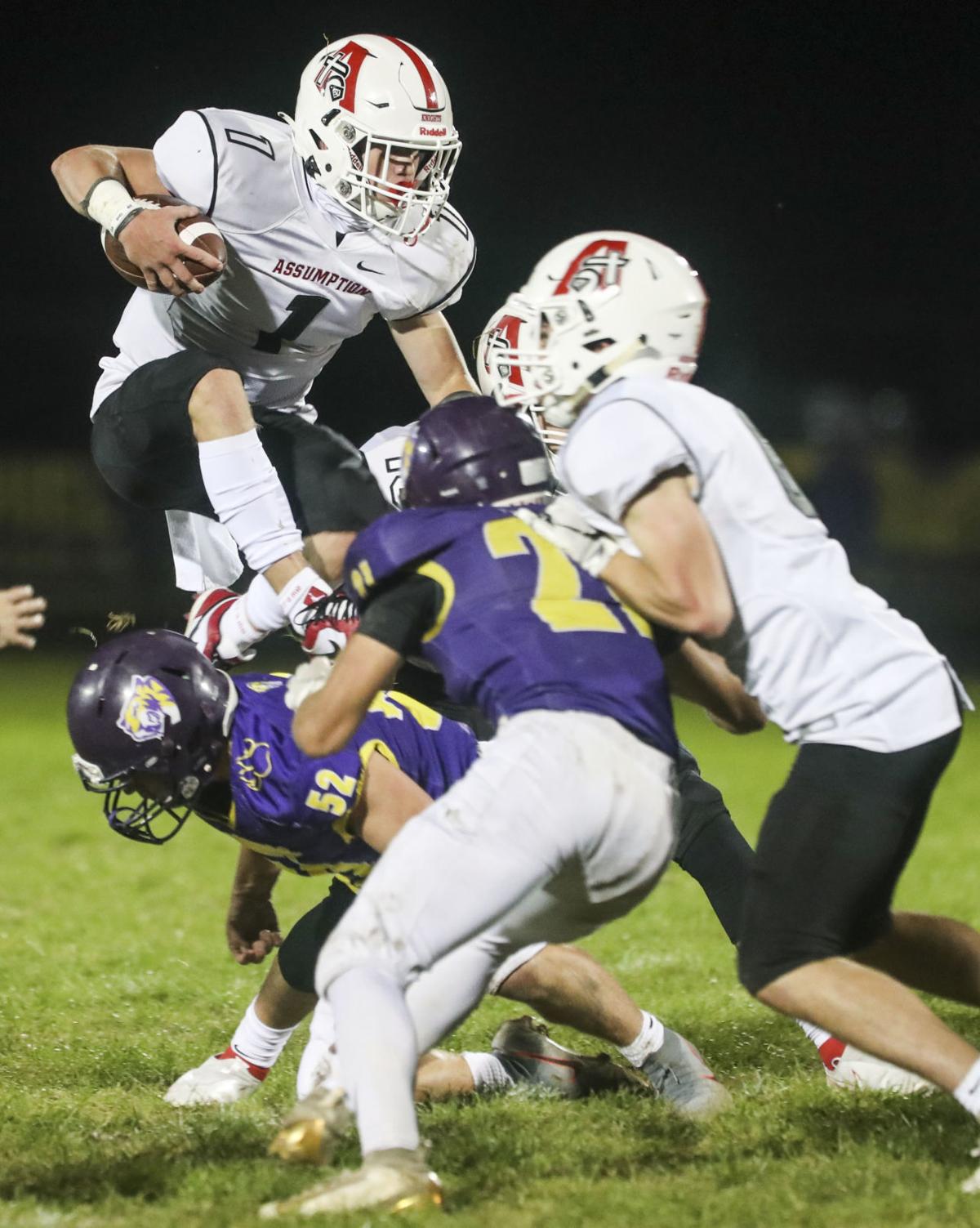 Assumption's Dayne Hodge attempts to get past Central DeWitt's defense last Friday at Birney Field. The Knights will travel to Cedar Rapids Washington on Saturday afternoon.

Davenport Assumption’s football team has not been tested for four quarters this season. It has won three games by continuous clock and dominated much of last Friday’s 31-6 victory at Central DeWitt.

This was supposed to be the week where the Knights would learn a lot about themselves with a road encounter at North Scott, a program which has reeled off 20 consecutive district victories.

But with a spike in positive COVID-19 cases in the Eldridge community and North Scott not in school, that game was nixed and left Class 3A sixth-ranked Assumption with an open date.

The Knights will travel to Kingston Stadium on Saturday to play Cedar Rapids Washington, a 4A school with a 3-1 record. The freshman/sophomore game will kick at 11 a.m., with the varsity slated for 1:15 p.m.

“We were looking forward to a highly-competitive game, a real test,” King said. “I’m sure North Scott was as well. We were targeting that date in our schedule where we had to be at our best.

“In that regard, we felt like this is a similar type game for us.”

Maurice Blue, who was on King’s staff at Washington and now the head coach there, called King this past weekend to explore the idea of playing. The Warriors were scheduled to face Iowa City Liberty, which has been required to pause its season since the Iowa City school district is doing 100% remote learning.

“Mo and I remain pretty good friends,” King said. “They were looking for a game and saw we were open as well. We checked around and looked at some other things, but this made sense for us.

“We both were in the same boat that we wanted a home game, but they initiated things first so we decided to go there.”

“We definitely need that type of game where we’re really tested, put in some tough situations,” King said. “There were times in the DeWitt game I felt that was happening, but we were able to control that game pretty well.

“When our coaches met (Sunday), it was important to have a game that was going to push us. Win or lose, it doesn’t matter. We want to play a high-quality team and force our kids to compete for 48 minutes.”

Assumption turns around and plays the following Thursday at Brady Street Stadium against Clinton in its final home game of the regular season.

King felt a short week of preparation was worth the trade-off.

“That was the reason we wanted to play a day game (Saturday),” he said. “We think we can do it in one less day. We’re used to having short weeks when we play Friday and then Thursday. We’ll just combine a couple of our practice days into one and we’ll be alright.”

Elijah embraces ability to do everything for Tipton

TIPTON, Iowa — Merriam-Webster's top definition for the word versatile is, "embracing a variety of subjects, fields, or skills."

Less than a year after having open heart surgery, Landon Peterson is making an impact on Central DeWitt's defense and kicking game heading into the playoffs.

Sabers run past River Kings, get rematch with Knights

Lancers get unconventional bye into second round

Sabers run past River Kings, get rematch with Knights

TIPTON, Iowa — On paper, Friday’s contest between Tipton and Eddyville-Blakesburg-Fremont seemed like a toss up.

MAQUOKETA – The second matchup could not have gone any different than the first between West Liberty and Maquoketa, as the visiting Comets cam…

Assumption's Dayne Hodge attempts to elude the Central DeWitt defense during a 31-6 victory Friday night. The Knights will travel to Cedar Rapids Washington on Saturday afternoon.

Assumption's Dayne Hodge attempts to get past Central DeWitt's defense last Friday at Birney Field. The Knights will travel to Cedar Rapids Washington on Saturday afternoon.