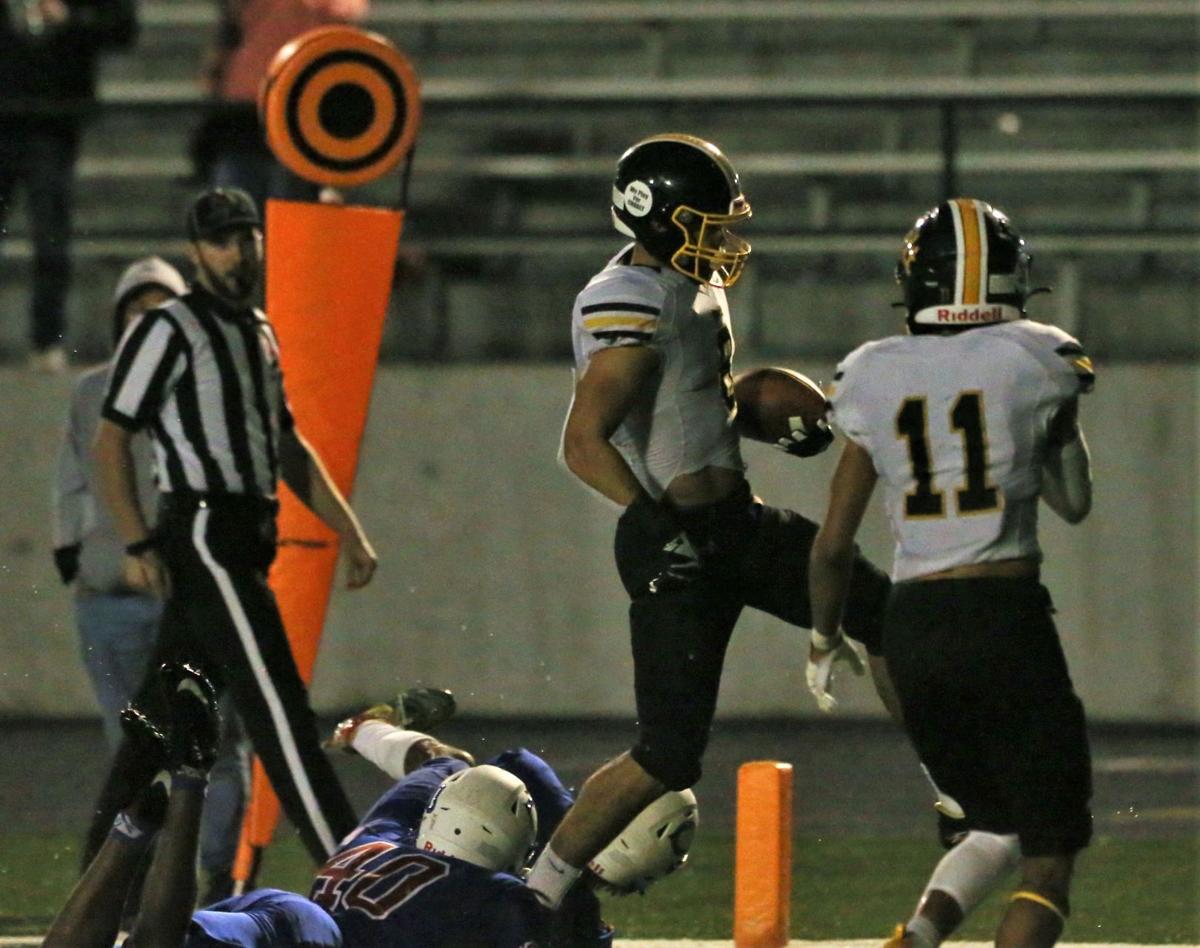 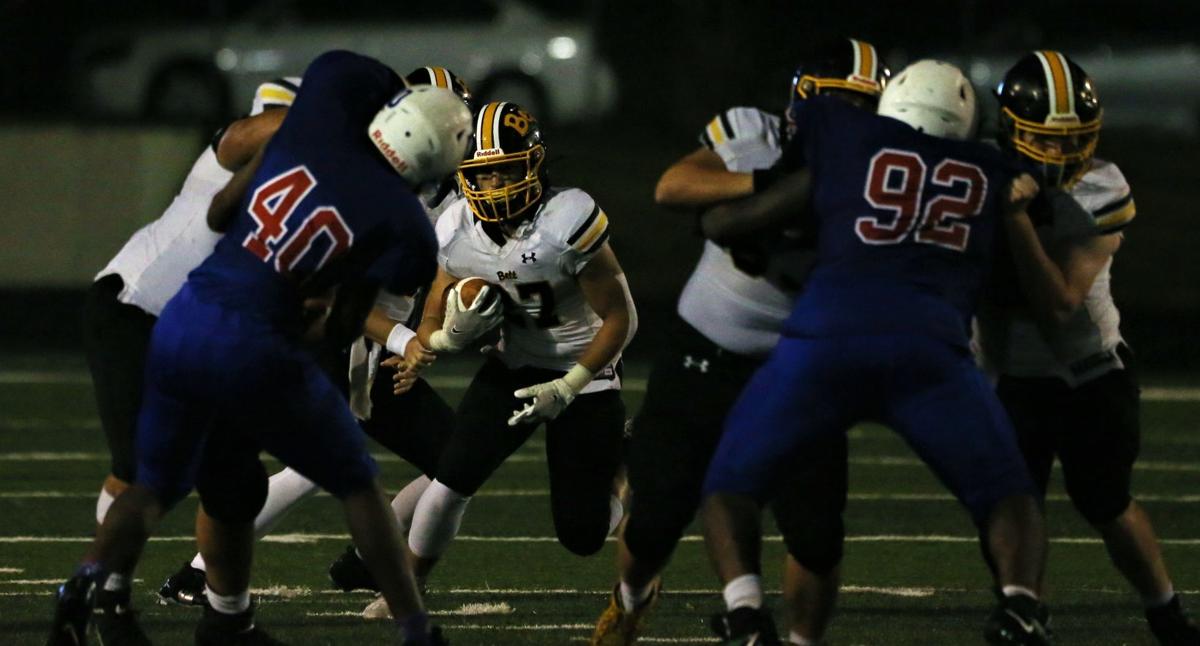 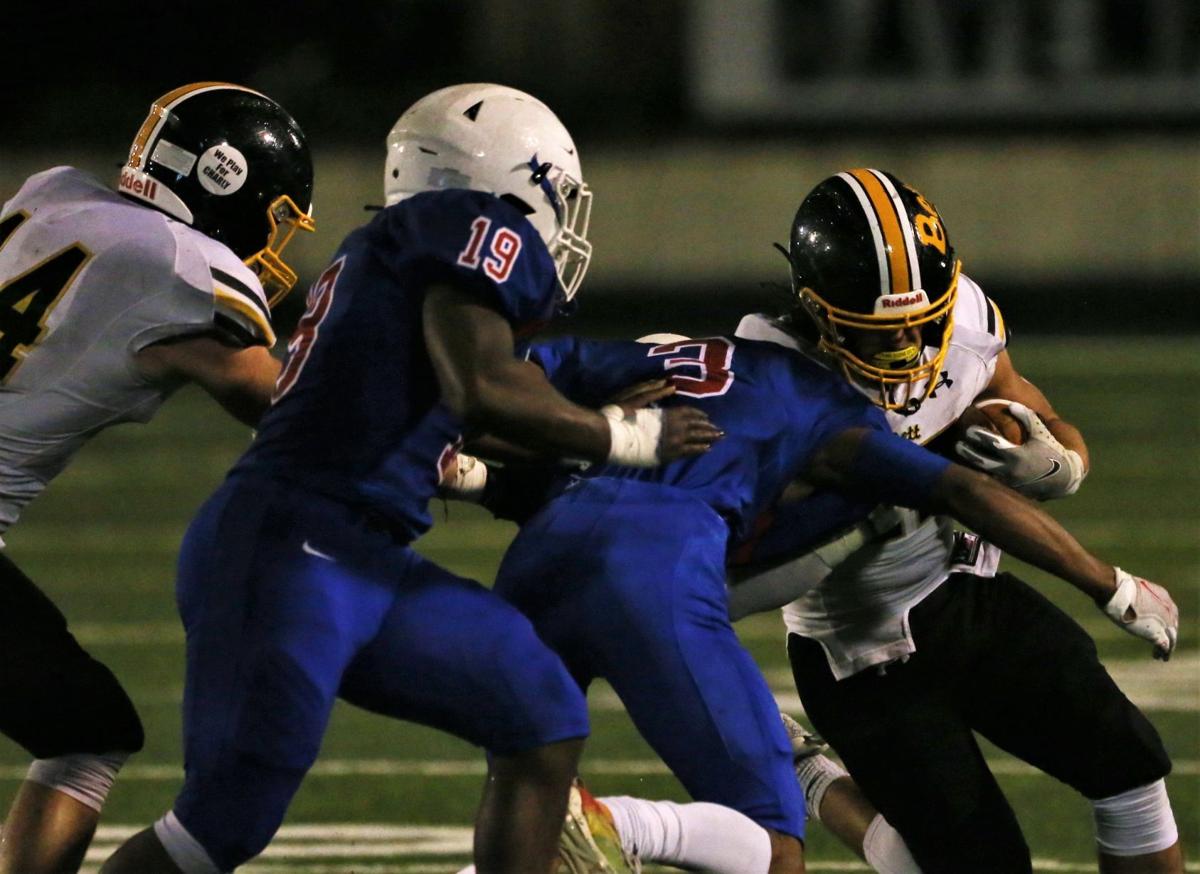 Bettendorf running back Isaiah Martinez is tackled by Davenport Central's Cortez Brown (3) during a game Friday at Brady Street Stadium.

Perhaps, you had to feel a little bit sorry for Davenport Central on Friday night when those Bettendorf frustrations came out at Brady Street Stadium.

Behind three touchdown catches from Numkena, a monster passing night from quarterback Christian Kautz and a suffocating defense, the Bulldogs pasted the Blue Devils, 45-7.

Numkena said he sensed something like this was coming after watching the intensity of practice from the past week after Bettendorf was hammered on Sept. 17 by Cedar Rapids Prairie.

“We’ve had a pretty tough schedule so it is nice to get back on track and get confidence in ourselves,” Numkena said. “It was more important to prove something to ourselves after a tough start. Here, we are really focusing on November, nobody is going to remember what we did in the regular season.

“We are just focusing on getting that (playoff) opportunity, but we do like our backs against a wall.”

Wiley used a different word to describe how the team has felt after starting the season with a 1-3 mark.

“Embarrassed, everybody was embarrassed by how things have been going so far, so our kids were taking those things personally,” Wiley said. “I think our guys know now that we have to go now and they did that tonight.”

Josh Pelzer got the visitors on the scoreboard with a 22-yard field goal to end the first quarter before Numkena really started showing his skills. He caught five passes in the second quarter for 103 yards and a pair of touchdowns. His first TD catch from Kautz went for 32 yards and his second went for 31 yards.

“I used to be a running back, so I do have some moves,” Numkena said of his shiftiness.

Numkena caught a 12-yard TD pass from Kautz with 8:36 left in the third quarter to put the Bulldogs (2-3) in complete control. He did not have to return to the game after that TD catch.

Elijah Mendoza took a screen pass from Kautz for a 39-yard touchdown reception later in the third and TJ Bogan scored on a 52-yard TD pass from Kautz as well early in the fourth quarter. Kautz’s final TD came when Brady Howard caught an outside slant, broke three tackles and raced 67 yards for the score with 4:09 left in the contest.

While Kautz rolled up nearly 400 yards passing, close to half of those yards were made by the receivers after catching the ball. Bettendorf’s defense took it from there. Diego Cortes recovered a pair of fumbles while RJ Garrison also recovered a fumble for the winners.

Ronan Numkena, Evan Forker, Mateo Rosas, John Powell, Bradley Hill and Xavier Hamilton along the defensive line for the Bulldogs held Central to a net total of minus three yards at halftime while the Blue Devils (3-2) had just two first downs in the first two quarters.

The hosts got their one score in the fourth quarter when Corbin Simatovich hit Nate Hummel for a 23-yard touchdown pass over the middle.

Bettendorf running back Isaiah Martinez is tackled by Davenport Central's Cortez Brown (3) during a game Friday at Brady Street Stadium.