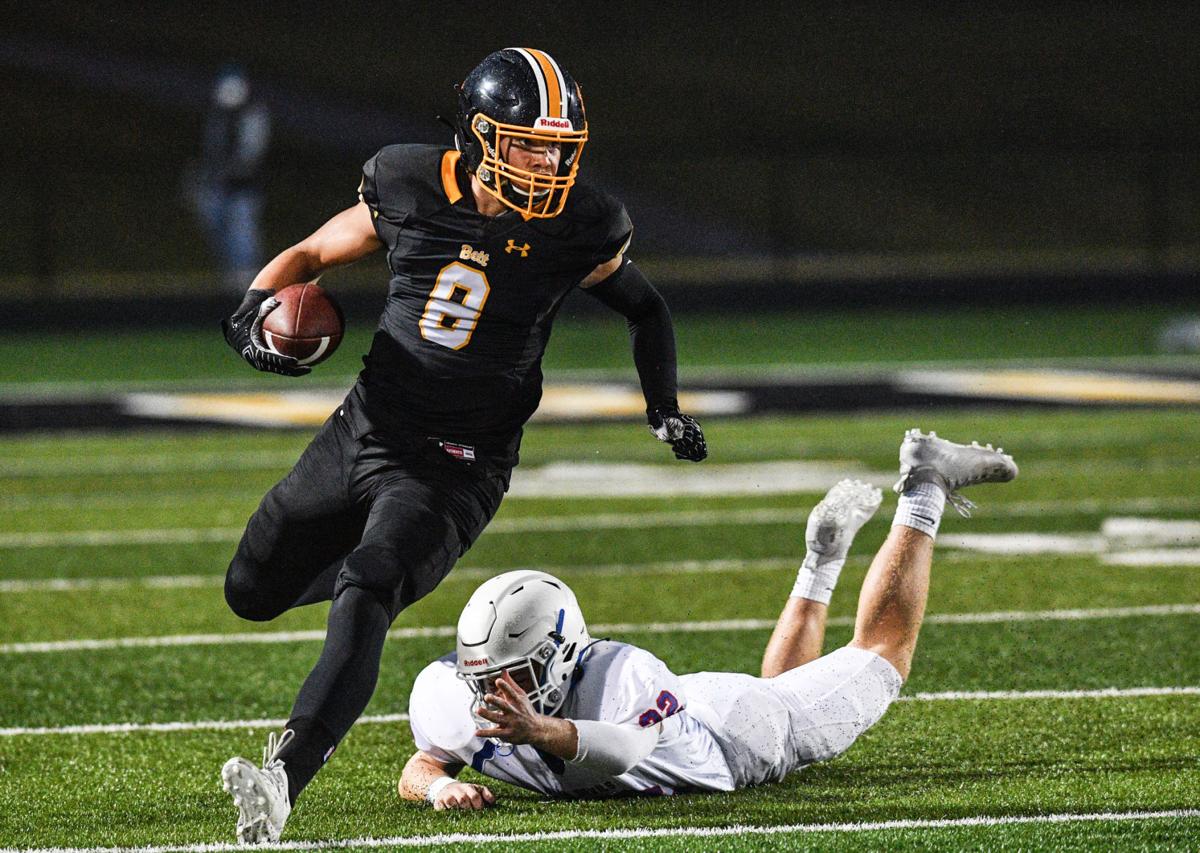 Bettendorf's Tynan Numkena runs the ball against Davenport Central's Cortez Goodwin during their game at TouVelle Stadium Friday in Bettendorf. 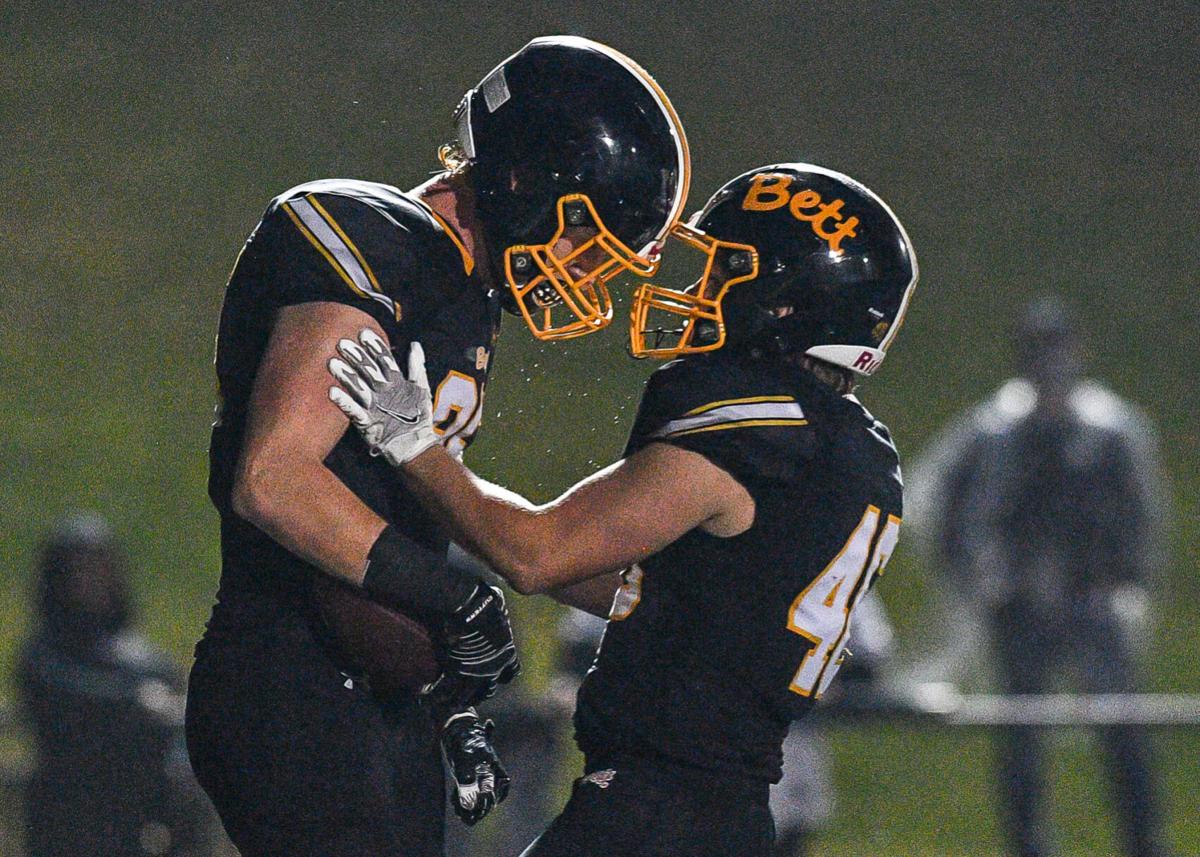 Bettendorf's Oliver Bakeris (85) and Austin Barta (46) celebrate a touchdown against Davenport Central during their game at TouVelle Stadium on Friday in Bettendorf.

With a week off following its season-opening loss, Bettendorf had time to tweak some things.

It may have also allowed a little rust to gather.

But despite some untimely penalties and some sloppy play early, Bettendorf eventually found its stride, rolling to a 36-0 win over Davenport Central.

The biggest change made during the bye was making Zach Garton the starting quarterback, which allowed the Bulldogs to move Tynan Numkena back to wide receiver, and the pair showed potential.

Garton finished with 144 yards, 99 to Numkena, who also rushed for 53 yards and scored twice.

"We're just looking at ways to give us more playmakers out there and Tynan is such a weapon outside," Bettendorf coach Aaron Wiley said. "We just wanted to look at shaking things up a little bit.

After putting up 261 yards of offense in its Week 1 loss to Washington, Bettendorf piled up 397 against the Blue Devils.

The connection was clear on the game’s first play as Garton hit Numkena for a 12-yard completion.

"I told (Garton before the game) I'll be here for everything," Numkena said. "Just give me the ball and I've got you."

On that drive, Bettendorf drove to the Blue Devils 7, but a false start negated what would have been a touchdown pass from Garton to Numkena, and a 28-yard field goal attempt hit the upright as the Bulldogs came away empty handed.

In the first half, Bettendorf had 10 penalties for 78 yards, but committed just two in the second half.

"I think we were kind of sloppy early. Some of the dumb penalties; you can't jump offsides, a few false starts. We kind of shot ourselves in the foot a couple times," Wiley said. "Some of that is we've still got some guys playing their first varsity football games. We need to get a lot better but I thought we made a lot of great strides from two weeks ago."

After a Central punt, the Bulldogs went 59 yards in 10 plays to get on the board, with Garton hitting Oliver Bakeris for a 9-yard touchdown pass at 10:33.

The Bulldogs saw another touchdown come off the board when an unsportsmanlike conduct penalty negated an 18-yard catch by Bakeris, but the Bulldogs still converted. On 4th and 15, Garton hit Ryan Cole with a screen pass for a 23-yard gain, then two plays later, Numkena took the ball around the edge and into the end zone for a 5-yard touchdown run to put Bettendorf up 14-0.

Cole added a 28-yard touchdown run to put Bettendorf up 21-0 shortly before halftime. Cole finished with 163 total yards of offense, 140 coming on the ground.

Bettendorf looked poised to add onto its lead on its first possession of the second half, but Numkena fumbled the ball at the goal line and Central recovered.

That didn't keep the Bulldogs off the board for long as on the first play of Central's ensuing drive, Kane Schmidt stopped Dylan Graves in the end zone for a safety. Bettendorf then added another touchdown following the free kick as Garton hit Numkena with a 16-yard touchdown pass.

Central looked to finally find some offense as Nate Hummel — playing quarterback in the second half after starter Corbin Simatovich took a big hit late in the second quarter — hit Kellan Rush for gains of 45 and 26 yards to get the Blue Devils down within the Bettendorf 10. But Dylan Graves fumbled the ball at the 5 and Bettendorf recovered and put together a five-play, 95-yard drive capped by a 2-yard touchdown run by Terry Dunn that invoked the 35-point running clock.

Central head coach Ben Sacco said Simatovich would likely be out indefinitely following the injury, and Central also had injuries to running backs Dane Howard and Bryan Mitchell in the game.

"It's getting to be, where other guys are going to have to step up and play," Sacco said, "but it's tough."

The Blue Devils finished the game with 114 total yards of offense, led by Hummel, who threw for 86 yards, 71 of them to Rush.

"If I could take one thing from the defensive side of the ball is that our tackling was not as good as it needed to be to compete longer with them," Sacco said. "Then our guys started getting tired and their guys started making some plays where our guys weren't making plays. That's kind of been, we're our own worst enemy. Offensively ... it's about trying to figure out what we can do that works."

Unbeaten Pleasant Valley found its fourth victory of the season to be a collaborative effort.

Bettendorf's Tynan Numkena runs the ball against Davenport Central's Cortez Goodwin during their game at TouVelle Stadium Friday in Bettendorf.

Bettendorf's Oliver Bakeris (85) and Austin Barta (46) celebrate a touchdown against Davenport Central during their game at TouVelle Stadium on Friday in Bettendorf.