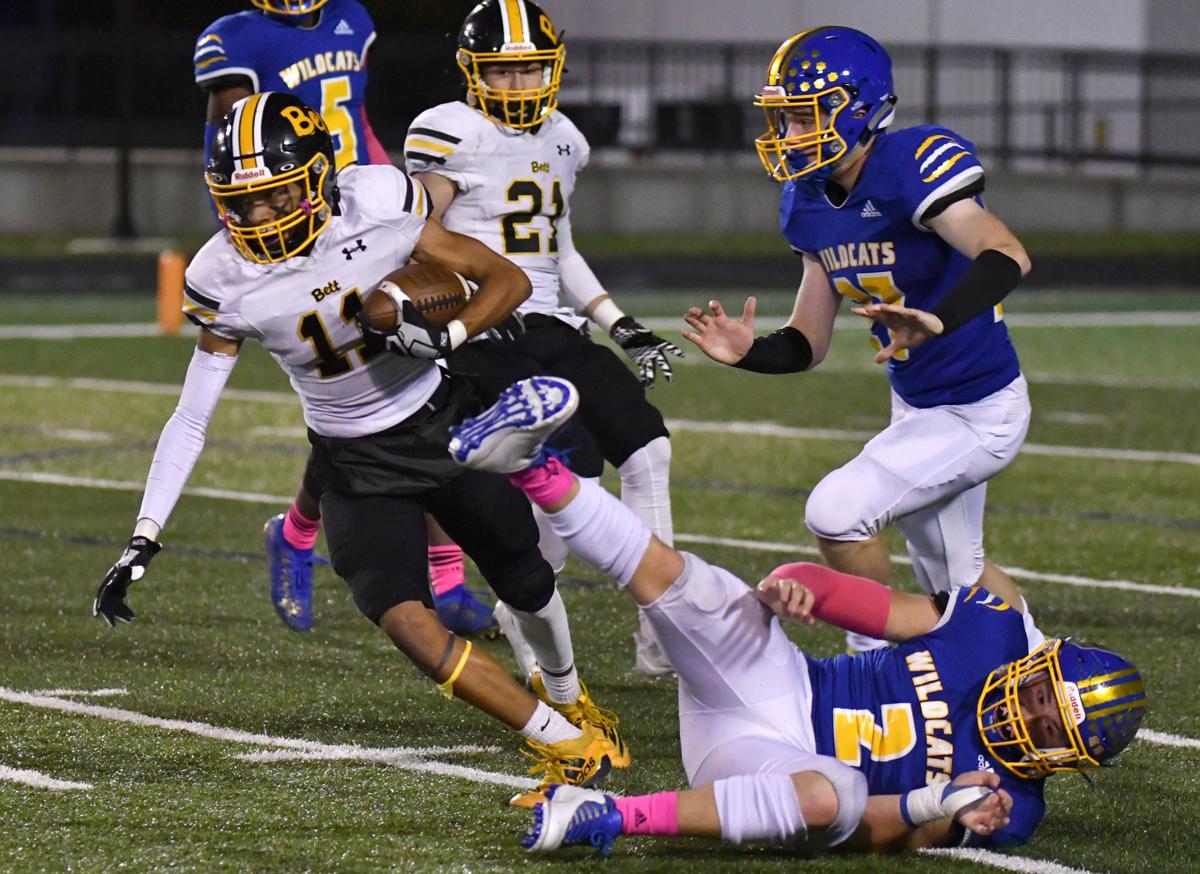 Bettendorf's Cameron Figgs breaks away from Davenport North's Gaige Avants during the first half Friday at Brady Street Stadium. The Bulldogs won 17-10. 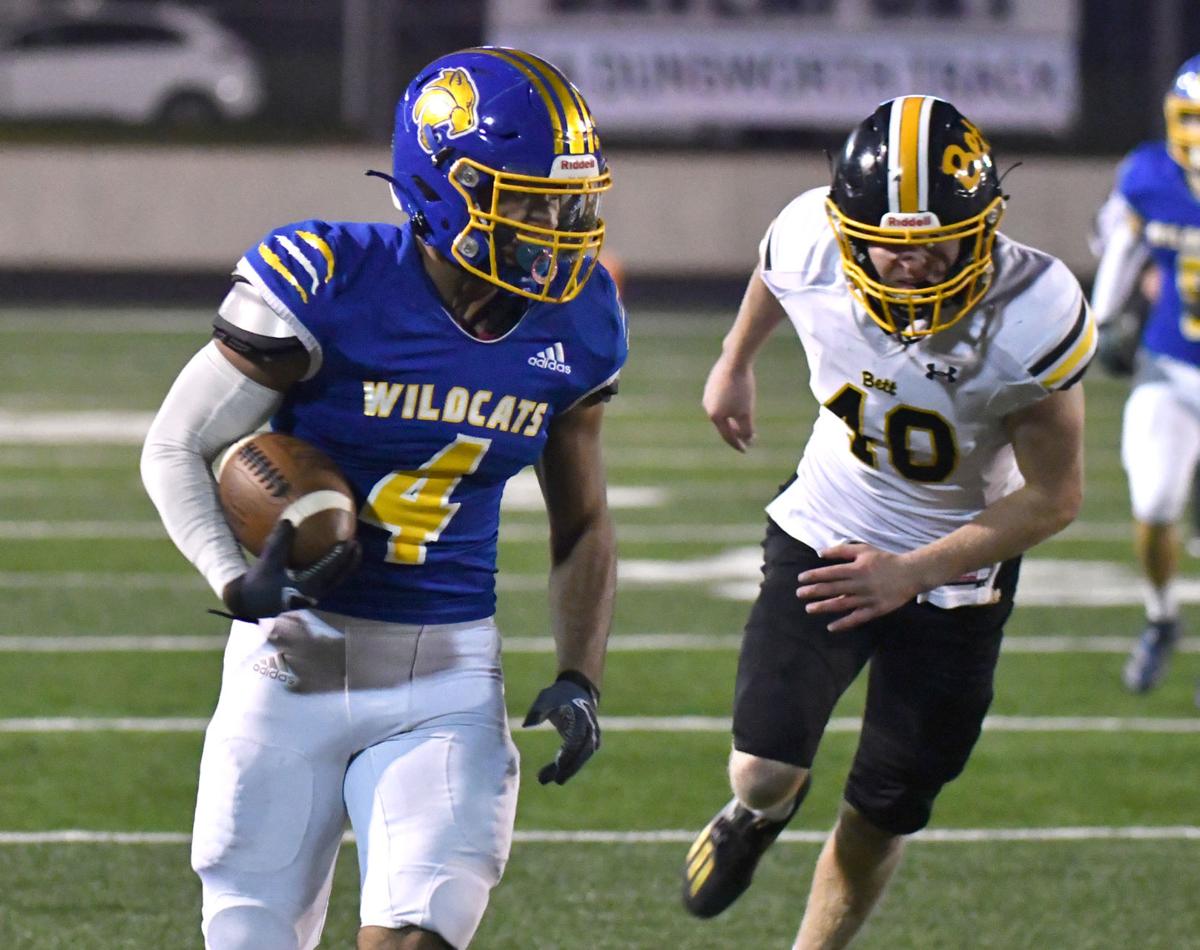 Davenport North's Giovanni Rivera is chased after by Bettendorf's Jackson Gross during the first half Friday. Rivera had 75 rushing yards for the Wildcats in their 17-10 loss. 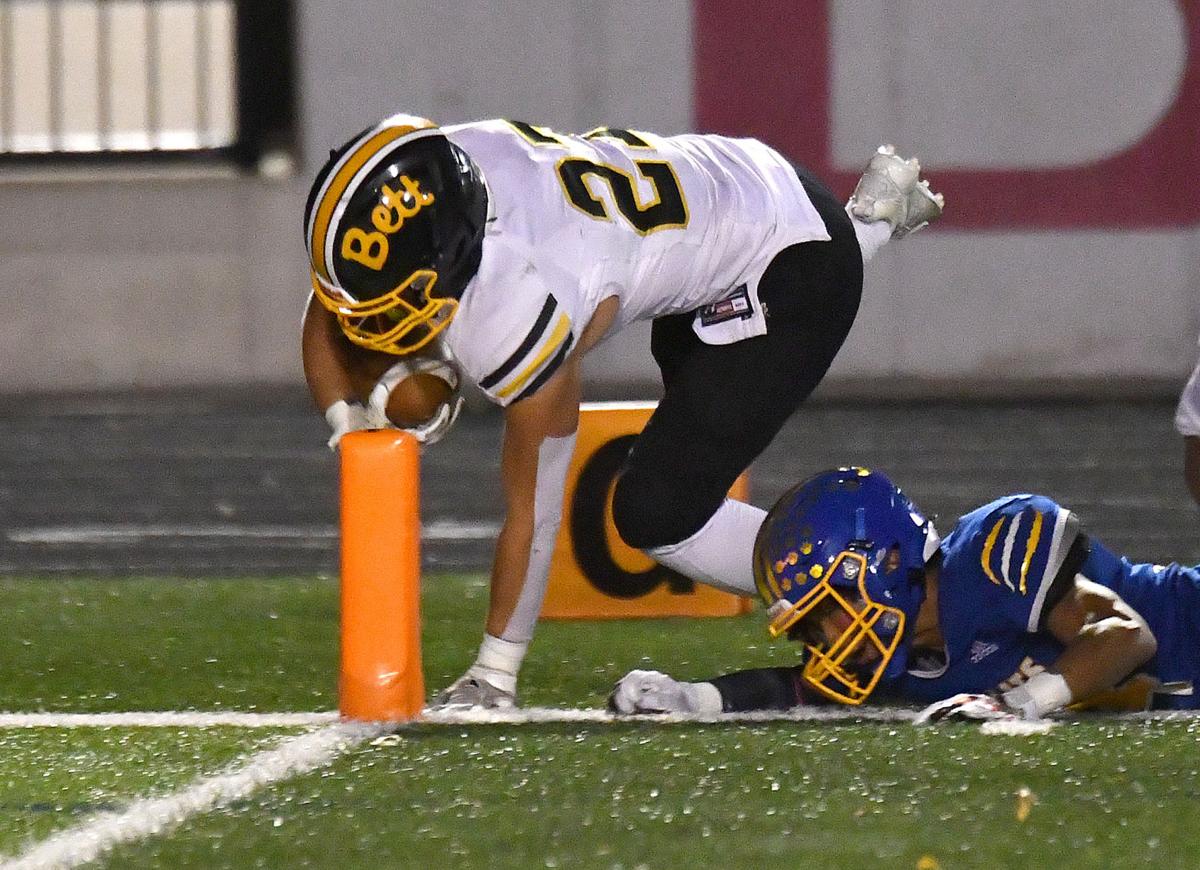 Bettendorf's Isaiah Martinez is tripped up near the goal line during Friday's game at Brady Street Stadium. 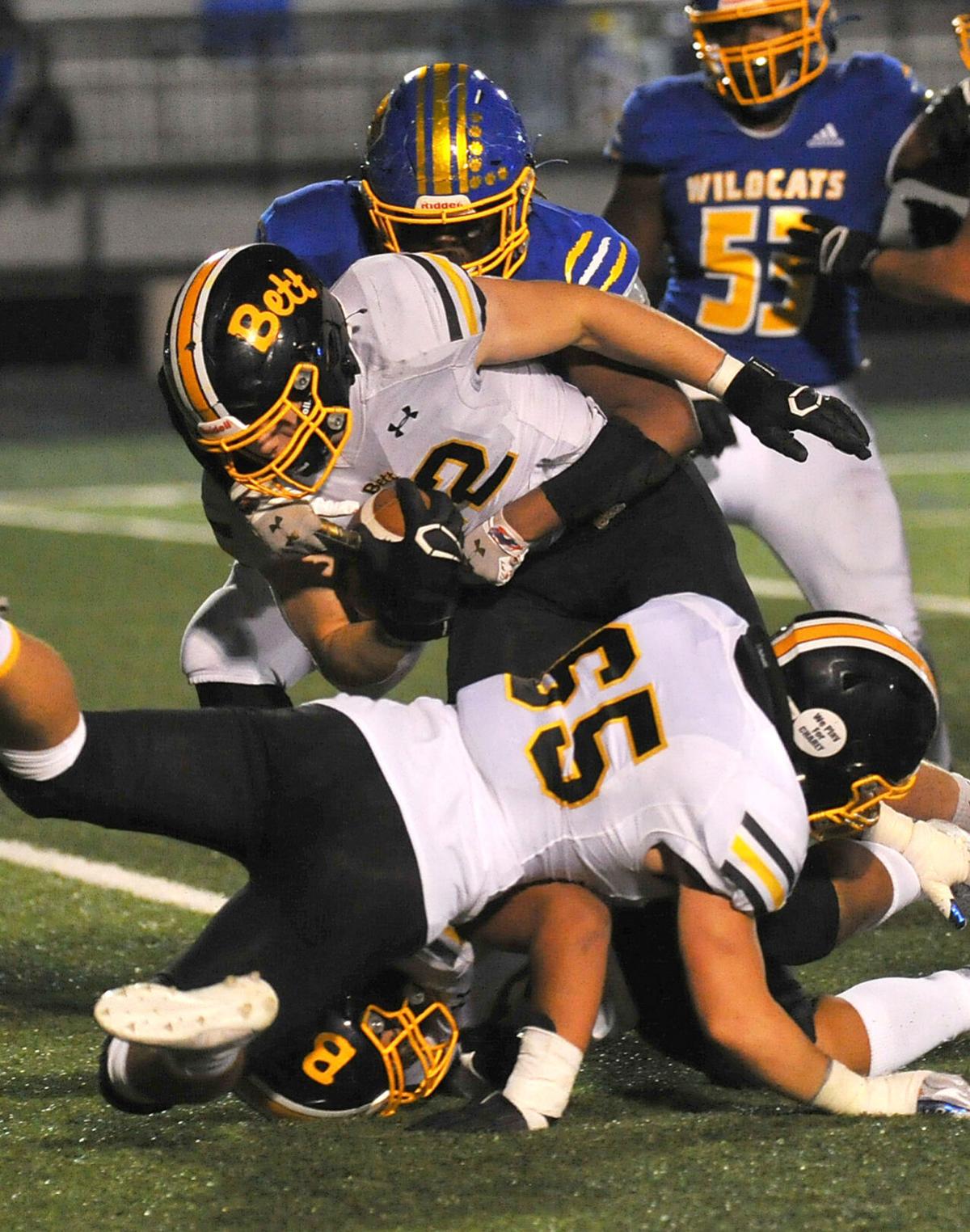 Bettendorf's Bradley Hill plows his way into the end zone for one of his two touchdowns Friday night.

After the Bettendorf junior muffed a punt midway through the fourth quarter Friday night, Davenport North had a short field and an opportunity to square up the game.

Moments later, Figgs picked off a pass near the goal line to help Bettendorf secure a 17-10 victory at Brady Street Stadium and the program’s 24th consecutive playoff berth.

“I knew once I fumbled it, I had to forget about it,” Figgs said. “We had to go back on defense and it was a game at that point. I knew I had to make a big play soon.”

With North facing fourth and 8 at the Bulldogs’ 15, Figgs intercepted Nolan Mosier’s slant pass to halt the drive.

“We preach all the time if something bad happens, you can’t let the wheels come off,” Bettendorf coach Aaron Wiley said. “You have to flush it, and that was a prime example. He fumbled the ball, could have easily pouted and went in the tank.

“He made a big-time play and saved the game for us.”

Sitting at 2-4 three weeks ago, the Bulldogs’ playoff outlook was bleak. After a forfeit win over Iowa City West, Bettendorf upended Cedar Falls and North to finish above .500 and jump inside the top 15 of the Ratings Percentage Index.

“We all know what we’re capable of doing,” senior linebacker Bradley Hill said. “Our confidence is at an all-time high. We’re ready to keep playing ball.”

For North, the season comes to an end at 4-5. The Wildcats, who came into the week 18th in the RPI, needed a win to have a chance at extending their season.

North had plenty of chances.

The Wildcats limited the Bulldogs to 188 total yards. They had three dropped interceptions, dropped receptions on offense and were penalized 11 times.

“I couldn’t be prouder of them.”

Hill scored both of the Bulldogs’ touchdowns out of a wildcat formation in the first half. It was the first time the Iowa wrestling recruit had carried the ball all season, a new wrinkle the Bulldogs put in during Monday's practice.

“As soon as (our offensive coordinator) told me I was going to run the ball, I got really excited,” Hill said. “When he called my number, I was ready to go.”

Hill said it was the first time he scored a touchdown since seventh grade.

“You want the ball in your tough, hard-nosed kids’ hands in important downs,” Wiley said. “Bradley gives us a little more thump down there and something we’ve played with a little bit.”

Bettendorf relied on its defense after building a 17-3 cushion.

North had 91 yards on its first two possessions, but managed just 74 yards the remainder of the game. The Wildcats lost starting lineman Jordan Kohler to a knee injury and had to rely on several lineman who had played in the sophomore game.

“We’ve been only five deep on the offensive line the last three weeks,” Hite said, “so we had sophomores on standby and were moving guys around.”

Cade Sheedy gave the Wildcats hope after intercepting a pass and returning it 44 yards for a touchdown with 8 minutes, 43 seconds left to make it 17-10.

North had the ball three more times, but couldn’t push it through.

“I thought our defense really played outstanding,” Wiley said. “They’ve got a lot of playmakers and a really good scheme on offense. We did enough on offense to grind through and get the win.

“At this point, there are no style points. It is survive and advance.”

For North, it was the final game for its seniors, a group led by four-year starters Dominic Wiseman and Sheedy.

“They came in bound and determined to change the culture here,” Hite said. “We’re slowly getting there. It is a process, and we’re definitely headed in the right direction.”

Bettendorf's Cameron Figgs breaks away from Davenport North's Gaige Avants during the first half Friday at Brady Street Stadium. The Bulldogs won 17-10.

Davenport North's Giovanni Rivera is chased after by Bettendorf's Jackson Gross during the first half Friday. Rivera had 75 rushing yards for the Wildcats in their 17-10 loss.

Bettendorf's Isaiah Martinez is tripped up near the goal line during Friday's game at Brady Street Stadium.

Bettendorf's Bradley Hill plows his way into the end zone for one of his two touchdowns Friday night.