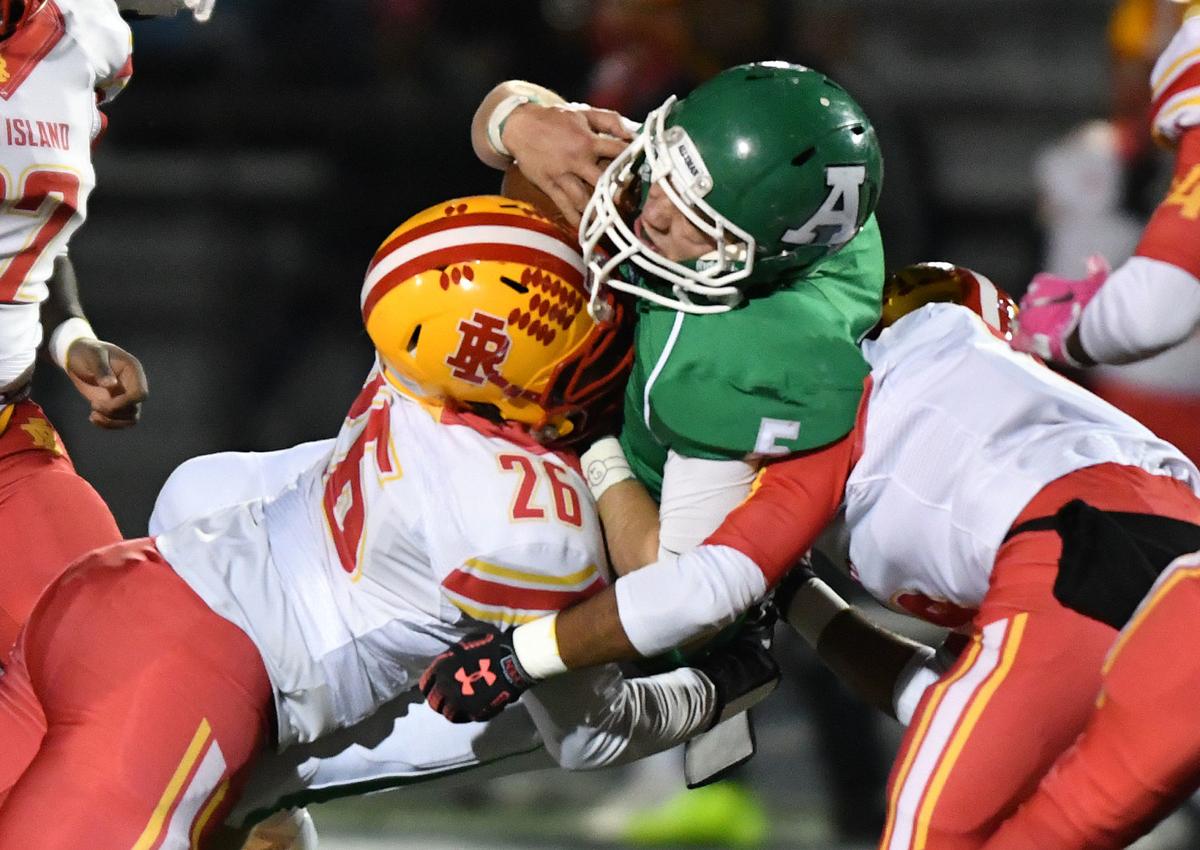 Alleman's Nate Sheets is picked up and tackled by Rock Island's Ravon Johnson Taylor during the first half, Friday, Oct. 25, 2019. 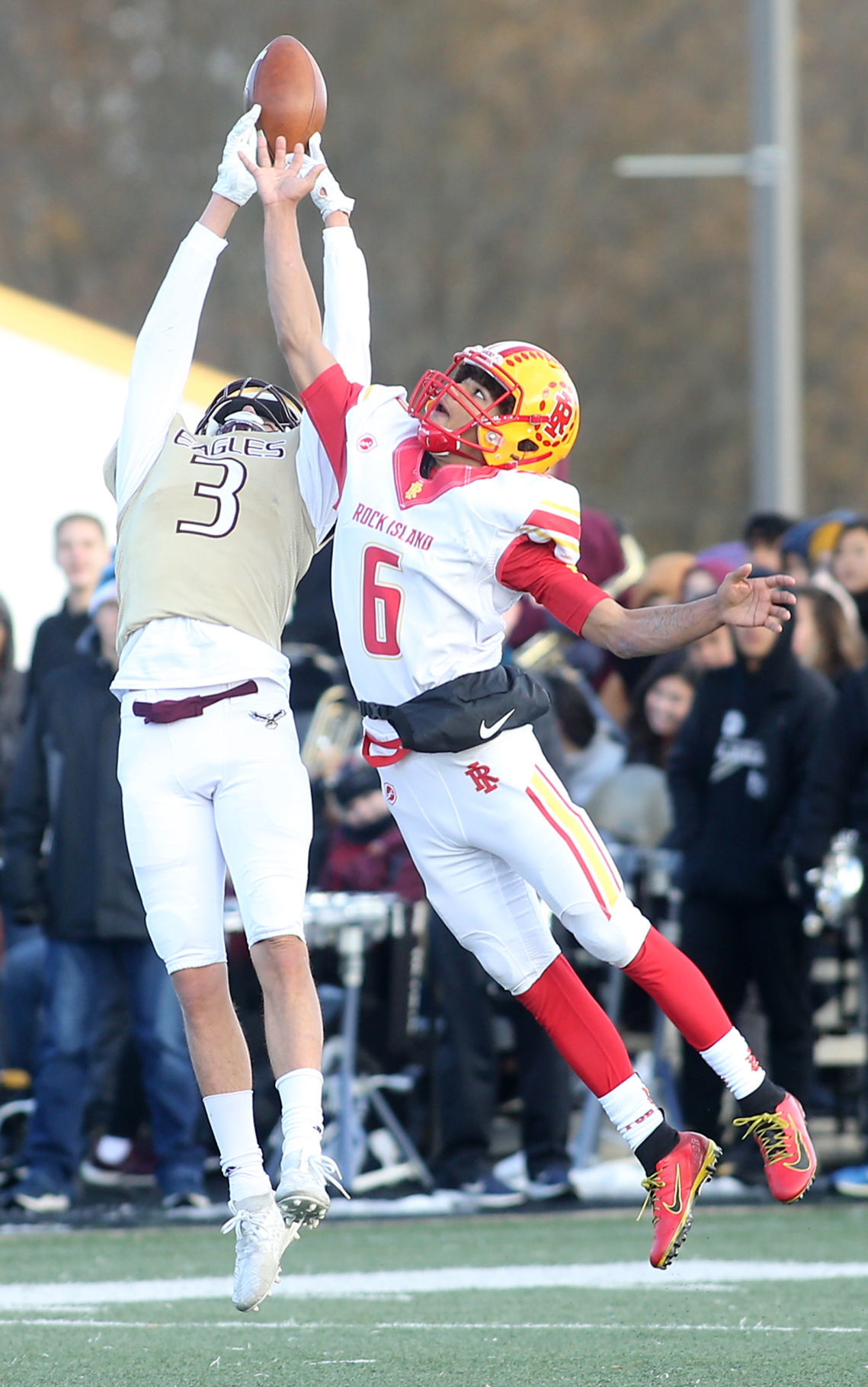 Rock Island's Kenyhon Yancey knocks the ball out of the hands of Dunlap receiver Gabe Calhoun during last Saturday's Class 6A first-round playoff game in Dunlap.

Six games into the season, the Rock Island football team was finding it difficult to slow down any offense.

In his first year running the Rocks' defense, Dieudonne believed he had the right system and that his crew would put it all together before the season came to an end.

After six games, the Rocks were 3-3 (actually 4-2 when Rock Island gained a forfeit win a week later). They were allowing 289.7 yards rushing a game and 6.4 yards per carry.

Over the the last four games, all wins, Rock Island has surrendered just 619 yards rushing (135 yards per game less) for 4.0 yards per carry.

"I trusted Fritz and I knew we had great players on the defensive side of the ball," Rock Island coach Ben Hammer said. "The biggest thing is our kids have learned how to practice. They know where they are supposed to be. We are also healthy and confident."

They will have to be at their very best Saturday afternoon when the 8-2 Rocks host top-rated East St. Louis (10-0) at 1 p.m. at Almquist Field. The Flyers average nearly 500 yards per game.

Dieudonne never wavered on his system, one he first ran as a coach at Davenport West in 2007 and 2008.

"When I came to Ben, I told him we used it at West because we were too small but very quick," he said. "We had the speed and size to be really good in this defense. This defense uses less reading and more just playing. It takes away the guessing game.

"This is a high-risk, high-reward system and it's going to give up some big plays. I wasn't worried because I told the guys if they are playing fast and playing hard, I don't mind mistakes. They bought in at the Galesburg game. We gave up some yards, but we went to overtime and I told them all we have to do is keep the ball out of the end zone and we get a win and that is all that matters."

The Rocks have used that confidence to become a stout defense against the run. Over the last 10 quarters, Rock Island has allowed just 313 yards rushing.

"We just came together," defensive tackle Roman McCoy said. "We started playing harder and more aggressive. Once we started to slow down the run, we also started getting to the quarterback better on the rush."

Added linebacker Ravon Johnson Taylor, "We have made it more simple and with a lot more energy. We are playing for each other."

Hammer said moving outside linebacker Terrell Akers to the defensive line was a key. They also moved standout running back Davion Wilson into an OLB spot.

"We have a good rotation up front and Terrell has been given more room to move and be more aggressive," Hammer said.

In essence, everything has been working together, and that's what Dieudonne has been looking for.

Another focus of his defense is takeaways. The Rocks have intercepted 14 passes and recovered 12 fumbles. They have a plus-13 turnover margin, a number any coach would be thrilled with.

"We have told our defensive backs, when the ball is in the air, it is our ball," Dieudonne said. "When someone is running with the ball, we punch, rip, crawl and do anything we can to get the ball loose. We changed our mentality this year. No longer do we stay back and let the opponent catch a pass, we don't let them catch it."

Yancey is one of the best around at that. He is almost always lined up against the opponent's best receiver.

"It feels great being the guy who lines up across from the opponent's best," Yancey said. "I don't like it when I give up a pass, but I have learned to let it go and make the next play. We just want to play high tempo and make plays."

In large part, the Rocks want to keep the opponent from getting comfortable.

"Yancey leads the defensive backs and they work so well," Dieudonne said.

On the other side, Darrell Woodson got a big test last week when Dunlap moved Casey Fitzgerald to Woodson numerous times.

Woodson gave up yards, but he also made two huge plays against Fitzgerald.

He is not at all scared about East St. Louis this weekend.

"We learn from our mistakes," Woodson said. "I almost always line up against someone taller than me, but I have my ways to make plays. I'm not scared of anybody, including East St. Louis."

That's the outlook Dieudonne is looking for Saturday. He wants his team to play its way.

"What's nice is we don't have to come up with some gimmick defense, we will play what we play," he said. "We noticed teams have played scared against (ESL) and have their corners 10 yards off the ball. We will play press coverage because that is what we do."

Added Johnson Taylor, "Our belief this week is they have to come to the 'Town' and play us."

Alleman's Nate Sheets is picked up and tackled by Rock Island's Ravon Johnson Taylor during the first half, Friday, Oct. 25, 2019.

Rock Island's Kenyhon Yancey knocks the ball out of the hands of Dunlap receiver Gabe Calhoun during last Saturday's Class 6A first-round playoff game in Dunlap.