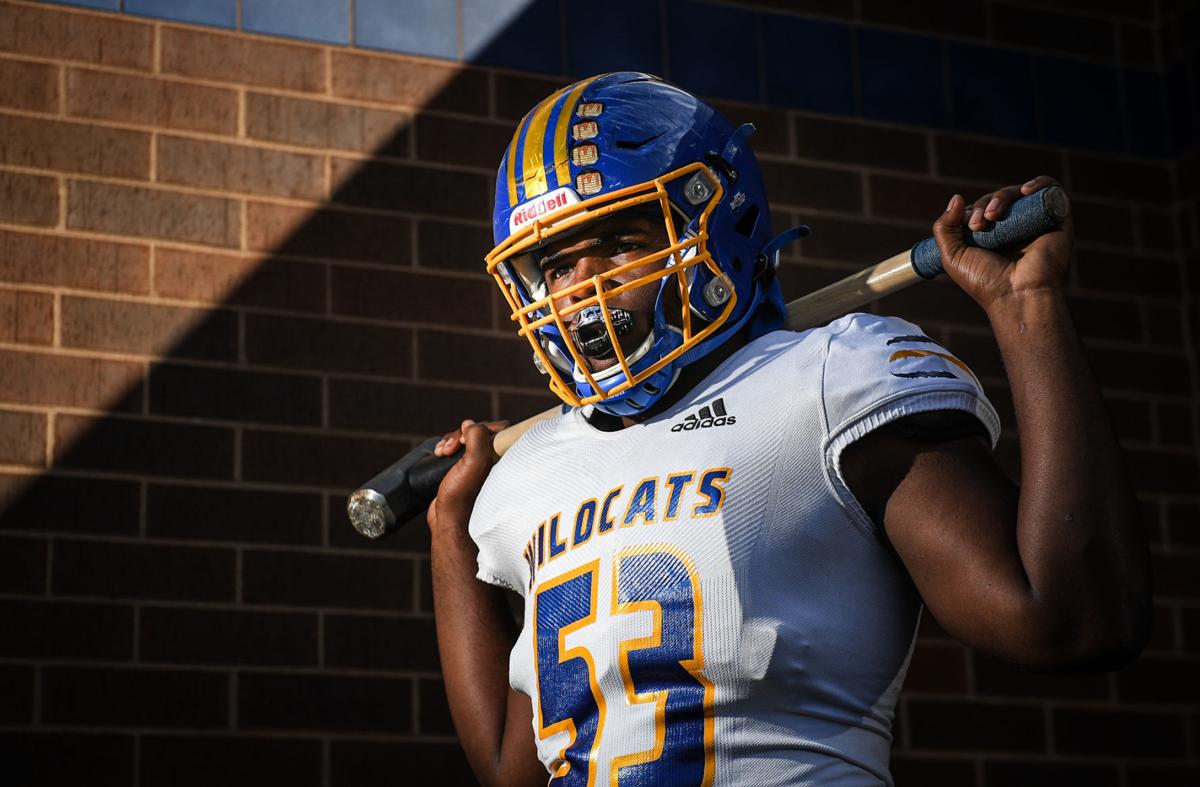 Davenport North senior all-state defensive lineman Dominic Wiseman is this week’s Iowa Pacesetter. Wiseman is a four-year starter and has more than 50 tackles for loss and 140 tackles in his career. 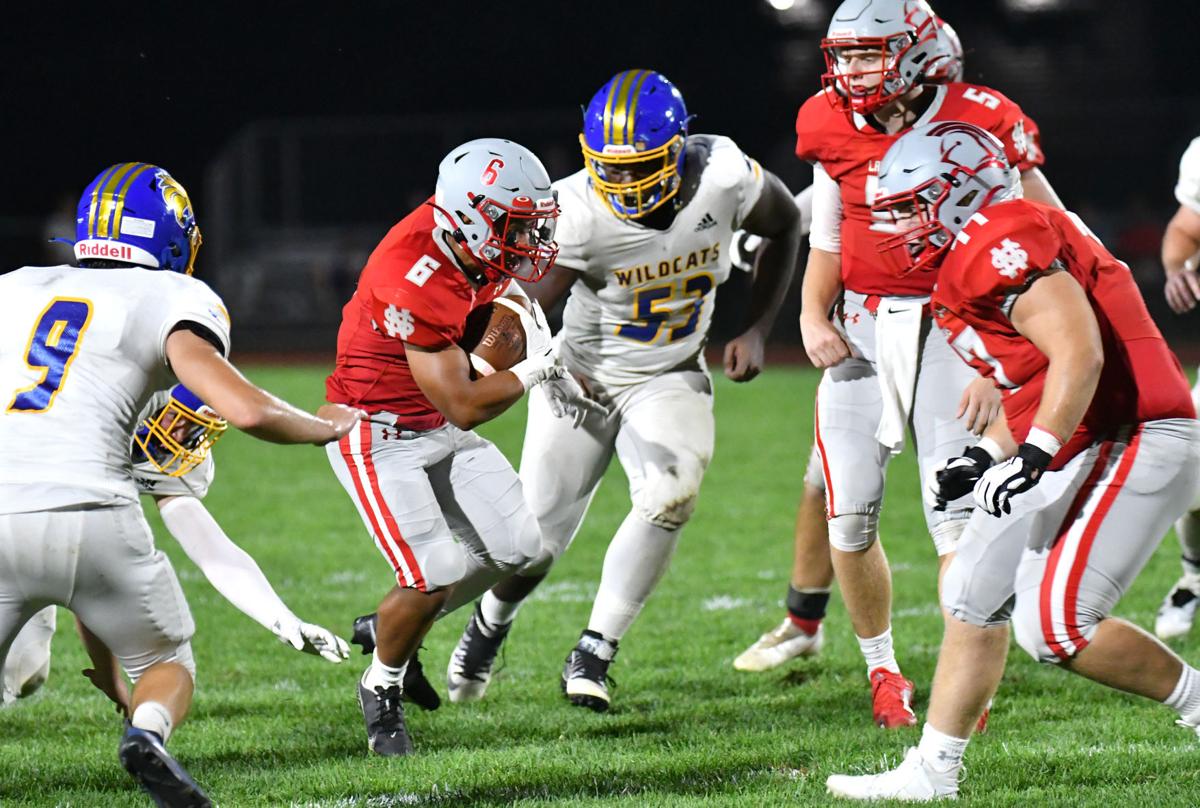 Dominic Wiseman did not have an immediate affection for football. It was quite the contrary.

"I tried to quit it after the first day, but my mom forced me to play it," he said. "I was a chubbier kid and any physical exercise I wasn't feeling at the time."

That was eight years ago with the Rising Knights Youth Football Program.

It turned out his mother, Erica Wiseman, knew best because the 6-foot-2 and 270-pound senior from Davenport North has developed into one of the most disruptive defensive tackles in the state.

A two-time all-stater and this week's Iowa Pacesetter, Wiseman has recorded more than 53 tackles for loss in his career and been at the forefront of North establishing itself as a respected program.

Football has evolved into a passion for Wiseman, a three-star recruit by 247 Sports who holds scholarship offers from Eastern Illinois, Indiana State, South Dakota, Minnesota State-Mankato and Southeast Missouri State University. The University of Iowa has offered him a preferred walk-on opportunity.

"I'm just playing the season and seeing all the offers I can get," Wiseman said. "After the season, we'll evaluate it as a family and see which one is the best for me."

From a bone-crushing hit against Linn-Mar in his freshman season to knocking down a screen pass that led to a turnover in last week's road win over Iowa City West, Wiseman is at the heart of North's defense.

He has accumulated 141 tackles and nearly 10 sacks in his career. It has led to 16 victories versus 13 defeats during his time in a Wildcat uniform, the best four-year win percentage in school history.

"At any point, he can make a big play happen to turn the game for us," North coach Adam Hite said. "He just has sheer athleticism and sheer power when it comes to football."

Also a starter at left tackle on offense, defense is his calling card.

"I'm not on my heels," he said. "I get to push people on their heels. There isn't much glory on the (offensive line). The win is on the quarterback and running back and the losses are on you. With D-line, there is a little bit more glory."

With a combination of quickness, strength and technique, Wiseman has been a handful for opposing offensive lines.

Teams rarely play him one-on-one. Most bring a second or third blocker to prevent him from getting into the backfield.

Wiseman spent the first two weeks primarily at nose tackle, but has been a three-technique (aligned on the outside shoulder of the guard) the past two games.

"We have to get a little more creative in how we're going to move him around so teams can't double and triple as much," Hite said.

The attention has created opportunities for his teammates. Senior rush end Giovanni Rivera has 9.5 tackles for loss and middle linebacker Gaige Avants leads the team with 34 tackles.

"If you line me up one-on-one with somebody in the state, I feel like I'm going to beat them the majority of the time," Wiseman said. "When they start bringing two or three players, I take it as a compliment.

"It allows our other guys to make plays."

Still, Wiseman is making plenty of plays. He leads a 2-2 team with a dozen tackles for loss, including five in a 27-23 loss to Dubuque Senior two weeks ago.

"He's very smart and willing to learn," Hite said. "He knows why offenses are doing what they're doing and he's very instinctive on that end."

Just as vital as his production has been his leadership and voice within the team.

Hite said Wiseman always gives a pregame speech, either in the locker room or on the way down to the field.

"He's a great game day leader," Hite noted. "He has that switch and he flips it. Kids will follow him into the fire."

Wiseman realizes his words and actions go a long way in dictating the mood of the team.

"I have a big voice," he said. "It might not always be the best voice, but I'll make sure everybody is held accountable. They look to me, so if my head goes down, everybody's head goes down."

Frequently, his fiery spirit is on display for everyone to see. He feeds off the fans' energy. He thrives on breaking the spirit of an offensive lineman.

During a Week 2 win over Davenport West, Wiseman believes his relentless pursuit resulted in a couple faulty Falcons snaps and an eventual safety.

"When you're worried about somebody's speed off the ball and they keep coming and coming and you're physically tired, that's scary knowing you're at a disadvantage," Wiseman said.

That chaos he creates is one of the reasons Hite thinks Wiseman can play at the highest level in college.

"Dom can definitely play Division I football," Hite said. "We're just waiting for that offer to officially happen, but I do think he can play in the Big Ten, Big 12 or SEC. He's got all the attributes for it."

And after taking a game-day visit to Iowa State earlier this month, Wiseman said he yearns for an opportunity to compete in that type of environment.

"The level of football does kind of matter because I feel I can play at the top level," he said. "The fans just motivate you. It is an atmosphere I want to be in."

Before Wiseman concentrates on the next phase, he's determined to leave North on the right note.

The Wildcats are just outside the top 16 of the Class 5A Ratings Percentage Index, which will determine this year's playoff qualifiers.

North has a pivotal game at Pleasant Valley on Friday and contests remaining against state-ranked Iowa City High, Davenport Central, Muscatine and Bettendorf.

"Football, as a sport, is drifting away," Wiseman said. "You see a lot of teams with minimal numbers.

"I want to aspire the kids underneath us. North wasn't always in the best spot, but this senior class came in, did what they had to do and by the end North was a pretty solid team. It is important to keep that mentality throughout the program because more kids will stay involved if it remains a successful program."

Significance to wearing No. 53: "I went for 55, but it was taken. So when I got 53 my freshman year and made a little name for myself, I figured I might as well just keep it."

Movie that made you laugh the most: Step Brothers

Watch now: Hawkeye QB Spencer Petras on what he expects from the Wisconsin defense

Watch now: Hawkeye QB Spencer Petras on what he expects from the Wisconsin defense

Davenport North senior all-state defensive lineman Dominic Wiseman is this week’s Iowa Pacesetter. Wiseman is a four-year starter and has more than 50 tackles for loss and 140 tackles in his career.