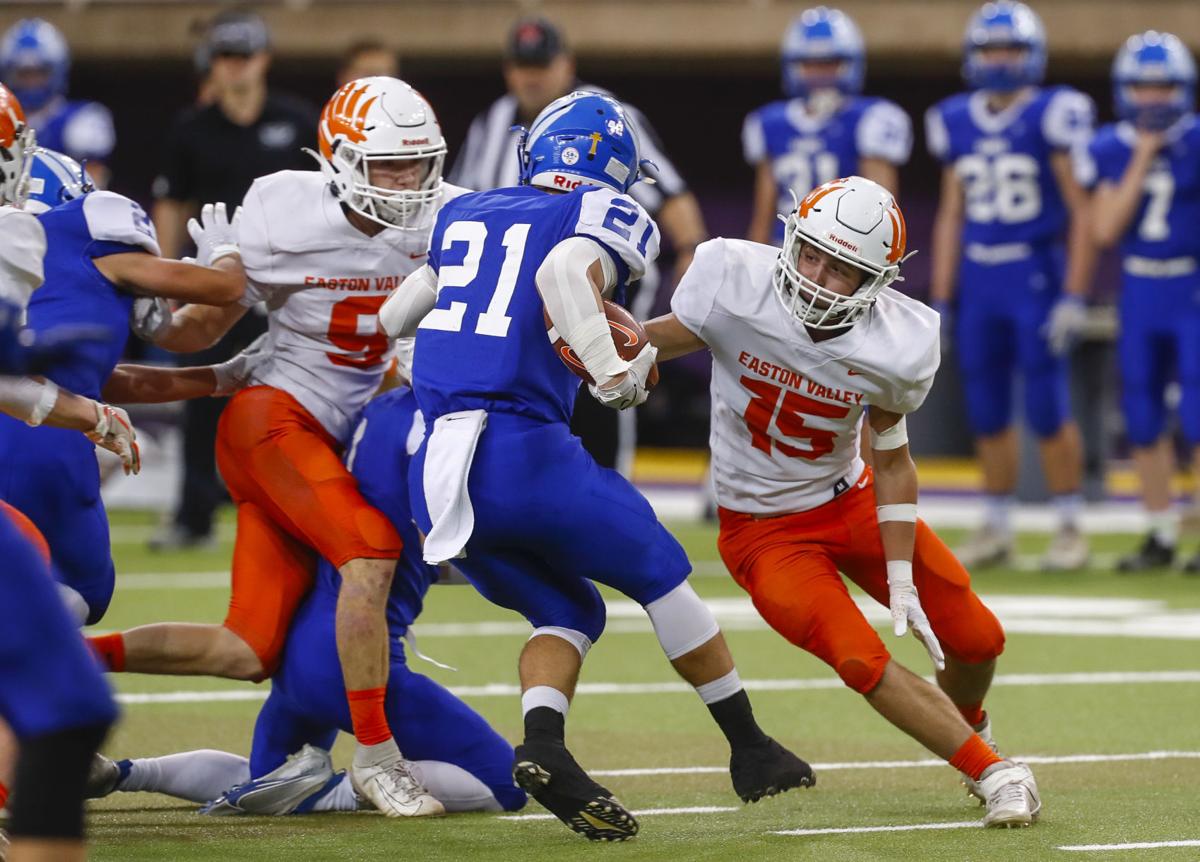 Easton Valley junior Ayden Huling (15) gets a hold of Remsen St. Mary's junior Brenden Fisch last week during the semifinal round of the state football championships at the UNI-Dome in Cedar Falls. 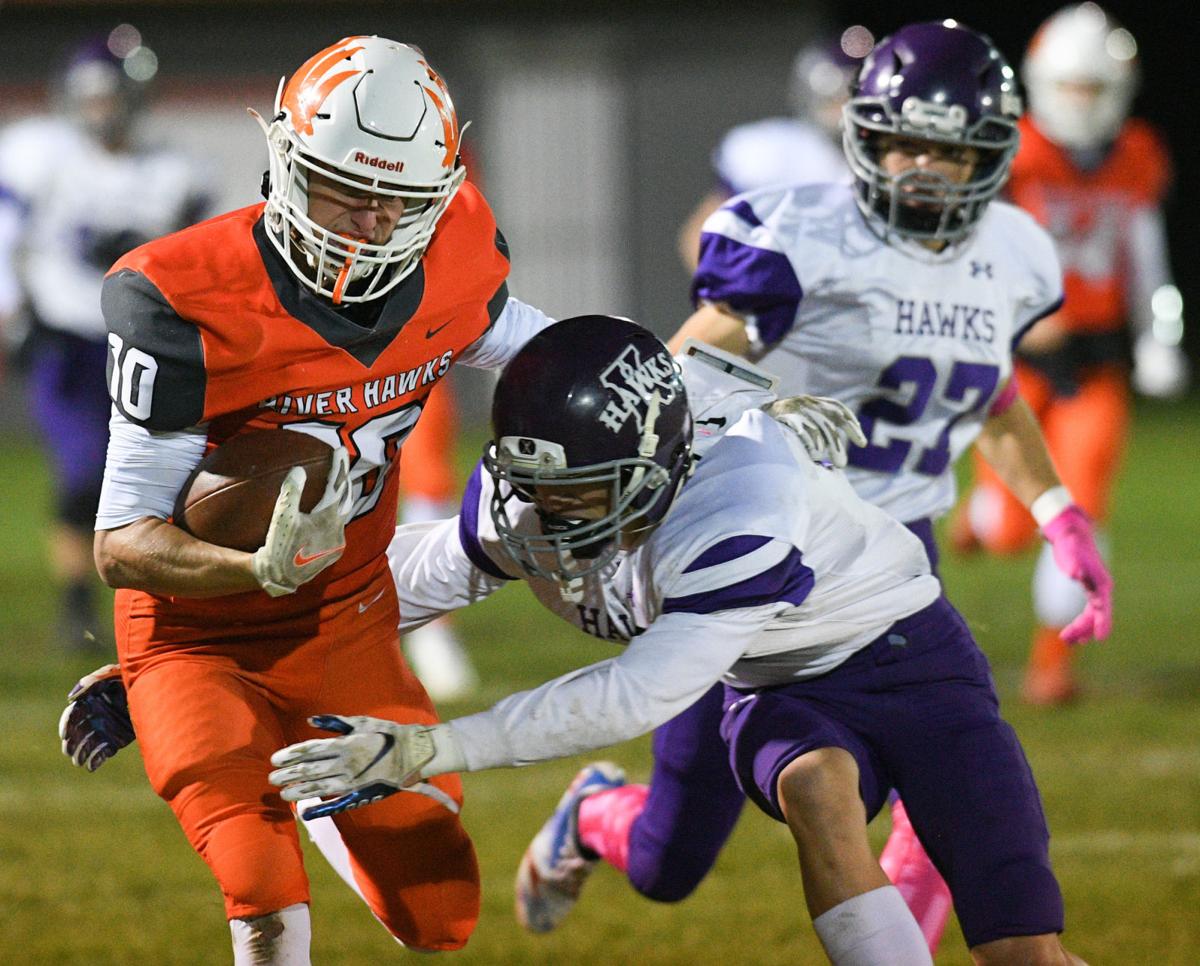 Easton Valley's Carson Fuegen (10) is tackled by Kee’s Dalton Dibert (8) during the eight-player state quarterfinal game at the high school earlier this month.

PRESTON, Iowa — Nobody has had a solution for slowing him down all season.

Cumberland-Anita-Massena quarterback Lane Spieker has etched his name into the Iowa high school football eight-player record books this fall with his 3,240 rushing yards and 69 rushing touchdowns.

Conversely, no opponent has been able to generate a run game against Easton Valley’s stingy defensive unit this season. The River Hawks are yielding fewer than 50 rushing yards a contest.

“It will really put us to the test and let us know how good we actually are,” Easton Valley two-way starter Carson Fuegen said.

Which side controls the line of scrimmage figures to be a key component of Thursday morning’s Iowa eight-player state championship game at the UNI-Dome in Cedar Falls.

“People say, ‘Shut him down and you’ve got them beat,’” Easton Valley coach Tony Johnson said. “Well, that’s easier said than done. Containing and maintaining him will be the key.

“He is super-fast and has got a really nice offensive line he gets to run behind. He fits in, finds the hole, hits it and he’s gone.”

Spieker, listed as a 5-foot-9 and 175-pound senior, has run through, around and past defenders for 12 consecutive weeks.

He has scored at least four rushing touchdowns in every game. He has registered 327, 396 and 289 rushing yards, respectively, each of the past three weeks.

Running is Spieker's preferred mode of transportation, but he has thrown for 1,069 yards and 12 touchdowns.

“He’s so dynamic you’ve got to be ready for anything,” Johnson said. “He gets in space, look out.”

Easton Valley (12-0) has not seen a back of Spieker’s caliber, but it has been exceptional against the run.

Spurred by their front three of Dillon Beck, Dylon Dyson and Hayden Felkey, the River Hawks have 142 tackles for loss (11.8 per game) and limited their last three opponents to 168 rushing yards on 77 attempts.

“We just flow to the ball really well,” Fuegen said. “Our defensive line has done a really good job and our linebackers and corners flow and fill gaps pretty well.”

Beck said it should be a great battle up front.

“Their O-line is big and physical and likes to manhandle defensive lines,” Beck noted. “We’ve been very good at that this year.”

CAM (12-0) has not really been tested for four quarters this season. It has a 49.3 per game point differential over the opposition, with nobody coming within 16 points of the Cougars.

“If we can get aggressive and get hands on their O-line and really fill gaps, not give them any running lanes, that will be huge,” Johnson said. “We need to force them into some uncomfortable situations.”

In addition to Spieker, the challenge for Easton Valley will be having its bodies and minds sharp for a 9:30 a.m. kickoff. This will be the first time any of the River Hawks’ players have played a morning football game at the high school level.

Johnson admits that is a concern. His team traveled to Cedar Falls on Wednesday with the 9:30 a.m. Thursday kickoff.

“Definitely different,” Fuegen said. “Usually, you’ve got all day to get mentally prepared and ready. This, you wake up and get ready faster than ever before.

“Whoever comes out and takes that momentum right away, I feel, is going to control the game. If we can come out hot, I think we’ll be successful.”

This marks the first state football championship game for either program.

Quarterfinalists each of the past two years, this has turned into a storybook season for the River Hawks.

“There is a lot of excitement,” Beck said. “We’ve all been waiting for this moment.”

Beck and Conor Gruver said residents have stopped them at the gas station in Preston the past couple of weeks wishing them good luck. Signs are up throughout town recognizing the squad.

Easton Valley has the statue “Big Orange,” formally “Big Red” from the Preston days, with a football in his hand located in front of the school this week.

“He comes out for special occasions,” Johnson said.

Now, it boils down to the River Hawks seizing the opportunity.

“I knew we were going to be good, but I didn’t expect it to even go as far as it did until we really started rolling toward the playoffs,” Fuegen said. “It has been a dream come true.

“We’ve got to go leave everything out there, and we’ve done that all year. We need to step up to the plate and make sure we don’t let the stage get in our heads."

Need to know: CAM quarterback Lane Spieker has accounted for 4,366 offensive yards and 83 touchdowns this year (69 rushing, 12 passing, 1 receiving, 1 punt return). Tied at halftime in their semifinal game last week, the Cougars outscored Audubon 44-7 in the closing two quarters. ... Easton Valley QB Conor Gruver has thrown for 5,163 yards and 88 touchdowns in two seasons. He was 20 of 23 in the semifinal win over Remsen St. Mary's. Easton Valley, in its ninth year of existence, seeks its first state team title in any sport.

Ridgewood transitioning to 8-player football in 2022

When the 2022 high school football season kicks off, there will be a new entry among the growing ranks of 8-player football in Illinois.

Easton Valley junior Ayden Huling (15) gets a hold of Remsen St. Mary's junior Brenden Fisch last week during the semifinal round of the state football championships at the UNI-Dome in Cedar Falls.

Easton Valley's Carson Fuegen (10) is tackled by Kee’s Dalton Dibert (8) during the eight-player state quarterfinal game at the high school earlier this month.