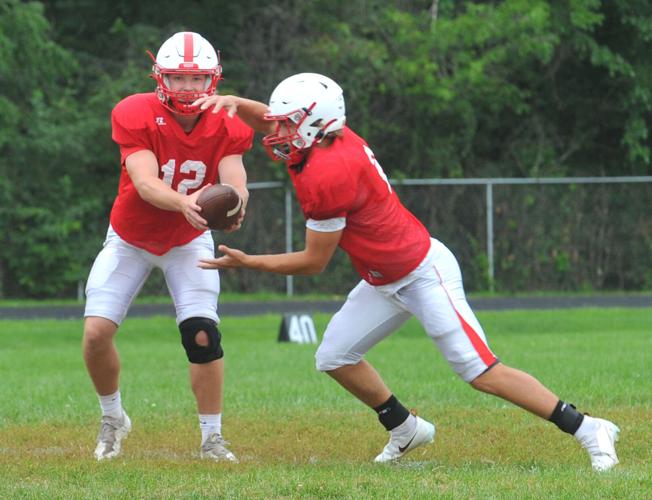 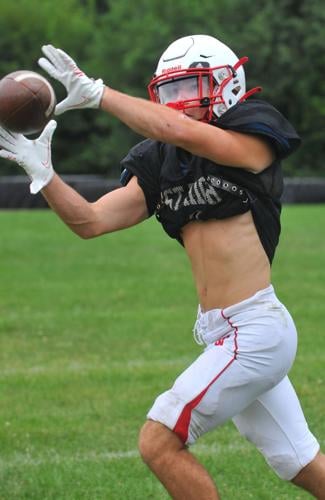 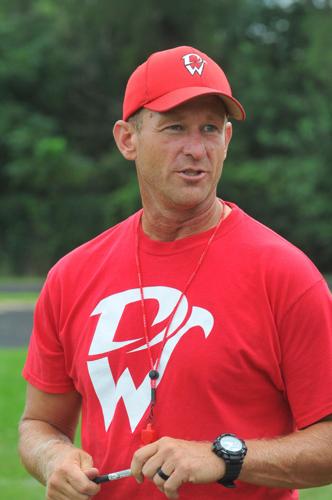 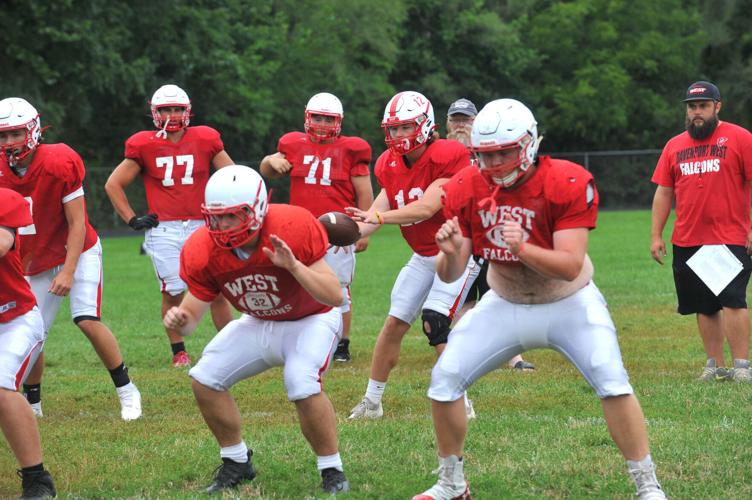 The Davenport West football team practices on Tuesday. The Falcons believe they can take a big leap record-wise this season.

Brandon Krusey can point to various reasons why his Davenport West High School football program is better equipped for success this fall.

The players have more confidence in their abilities. The execution has been sharper and more consistent on the practice field. The offensive and defensive lines are stronger and more cohesive.

Now, it is applying that on game nights.

“I’m really optimistic and just excited to get started and see where we stand,” said Krusey, whose team opens the season Aug. 26 at Clinton. “Our kids seem to have a great attitude here and have worked really hard.

“These kids believe they can compete with some people now.”

Krusey is in his third season directing the Falcons, who were winless in 2020 and 1-8 a year ago. West won its season opener against Clinton, 14-0, and had three other contests decided by 10 points or less.

With an experienced roster returning, a new coordinator on offense and fewer players expected to log significant snaps both ways, West is confident it can make a quantum leap this fall.

“We’ve hit rock bottom before,” quarterback Brady Hansen said, “so the only way is up.”

Hansen, who threw for nearly 900 yards last fall, is back for his third season as the starting signal caller. Tucker Avis and sophomore Jordan Tate are expected to be the primary ballcarriers while Dalton Thompson (19 receptions, 235 yards) and Kelton Youngberg (10 receptions, 60 yards) lead the receiving unit.

The offense has a new wrinkle as Matt McClean came over from Davenport North to become the offensive coordinator.

“(The offense) is a lot different,” Hansen said. “It is a lot more organized and it throws a lot more at a defense.

"I think a couple of our new coaches can help us get in the end zone a little bit more this year."

According to Krusey, Hansen is positioned for more success with two years of varsity experience and improved players surrounding him.

"I expect a lot from myself this year," Hansen said. "Senior season, it is all or nothing."

“We look more the part than we have in the past,” Krusey admitted. “We’re going to see blitzes like crazy, but we have a lot of older kids with experience and some size. Athletically, we should be able to compete a lot better than what we have.”

Points have been scarce for the Falcons the past two seasons.

“Our offense has gotten a lot better,” Thompson said. “We’ve had major upgrades with our (offensive line), everyone is coming together and bonding as a team. We just know what we’re doing.

“We have a lot of versatility with our offense."

West has made a concerted effort to have fewer players starting both ways.

"If they are focusing more on just one side, it will help the team a lot more."

Finishing plays, finishing drives and ultimately finishing games is the next step in the progression for the Falcons.

Krusey emphasized the importance of starting games well and not digging itself a two- or three-score deficit in the opening quarter.

"We've got to play with a lot more confidence," Hansen said.

"We were neck-and-neck or leading the ballgame in a couple situations last year and something happened, either one bad drive from us or one good drive from them, and our heads got down," Green stated. "This year, we're going to work on keeping our heads up and finish ballgames."

The schedule lends itself to opportunities.

Clinton, Davenport North, Waterloo West and Davenport Central are the first four opponents, teams which all finished below .500 a year ago. West closes with Muscatine in Week 9, a game decided by six points last October.

If West can turn a few of those results around, a winning season for the first time since 1999 is a possibility. It was Krusey's third year at North in 2018 when the program achieved a winning campaign.

"Our kids were frustrated by how close they were and the inability to finish the job at times last year," Krusey said. "It has driven them and given them a definite purpose coming into the season."

FALCONS AT A GLANCE

It won't be widespread, but rain will be in the area today. Find out when showers are most likely and if they will stick around for Wednesday …

The Davenport West football team practices on Tuesday. The Falcons believe they can take a big leap record-wise this season. 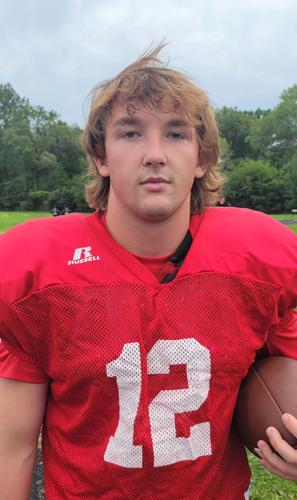 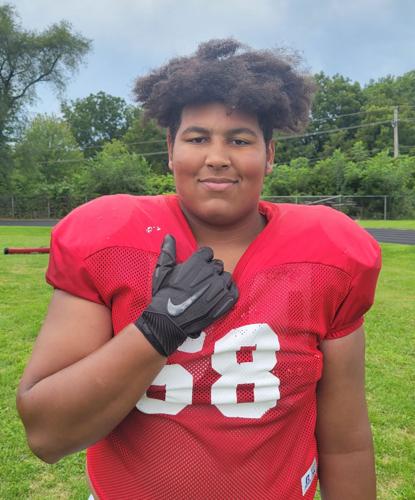