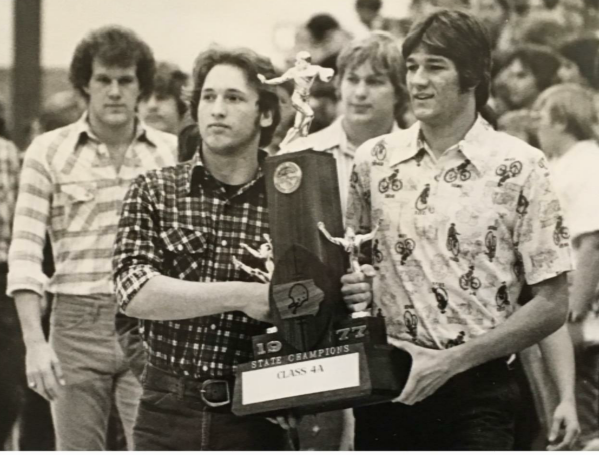 Davenport West's Todd Rubley, right, and Darl Osborne hold the state championship trophy at a rally following the Falcons' win over Newton in 1977. 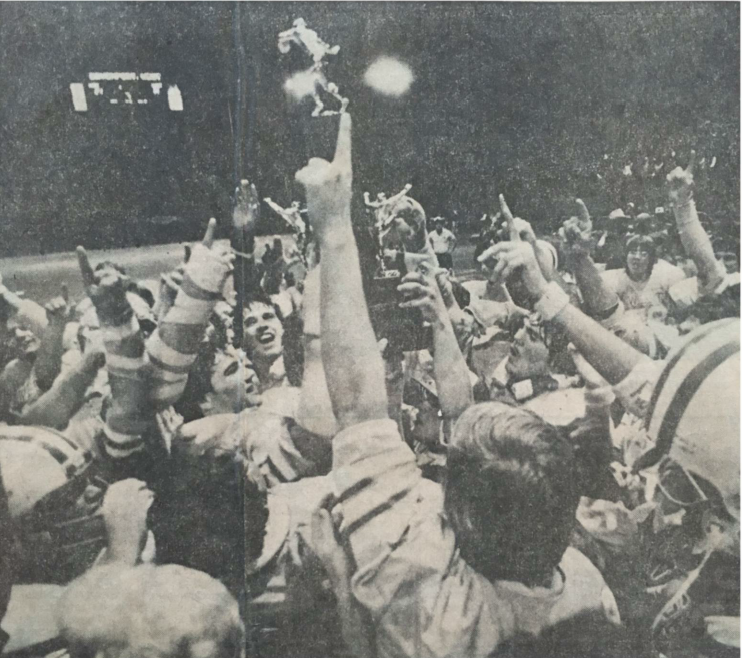 Members of the 1977 Davenport West football team celebrate their state trophy after beating Newton in the state championship game at the UNI-Dome in Cedar Falls, Iowa. 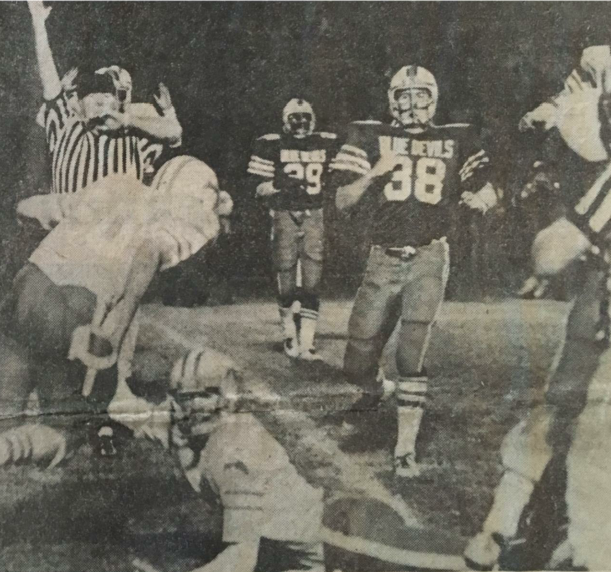 West quarterback Todd Rubley follows his center, Cary Sones, 50, into the end zone to give the Falcons a 6-0 lead during a game in 1977. The Falcons won the state championship that year. 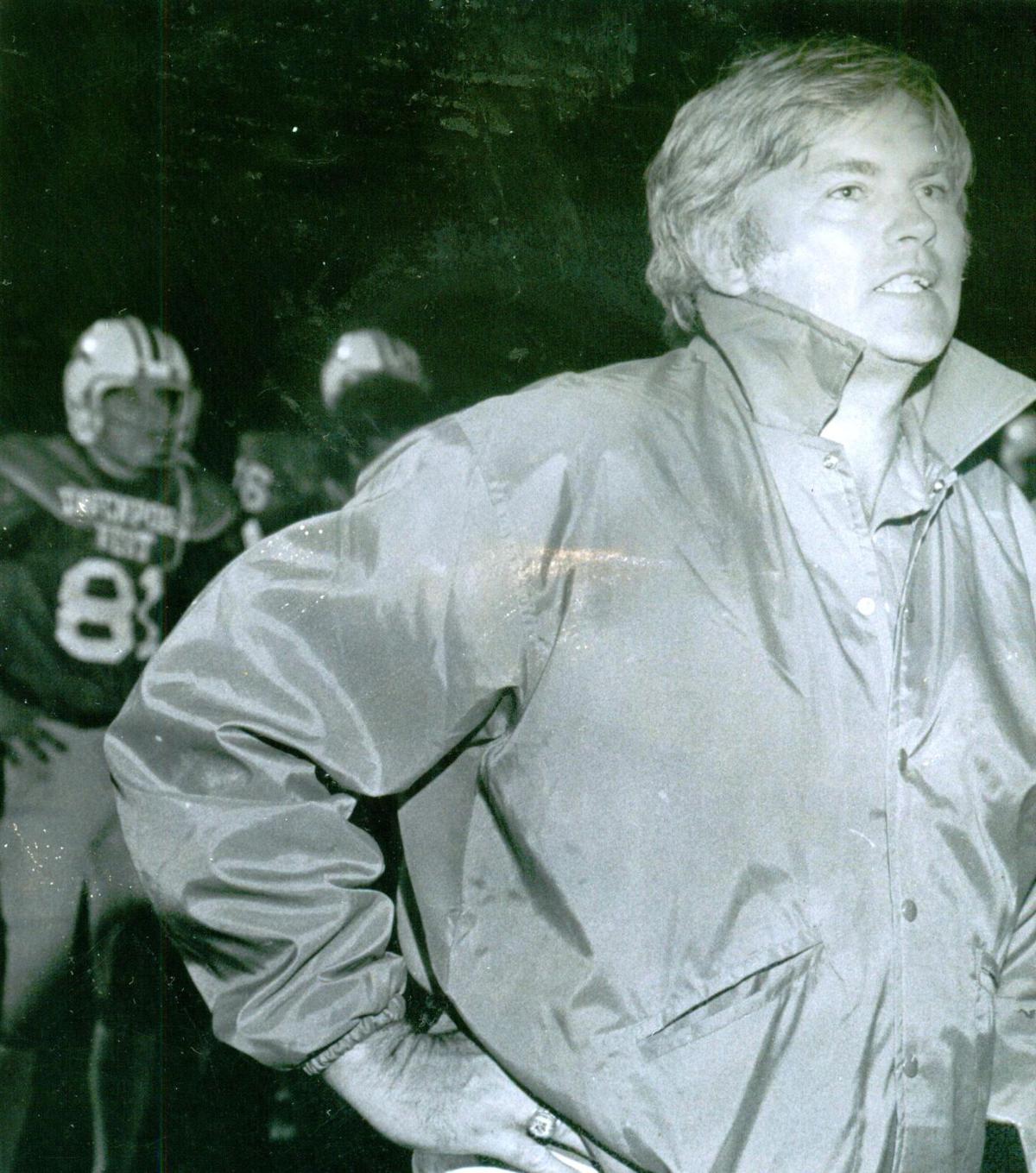 Roger Harrington directed Davenport West to two state championships, the last in 1977. The Falcons will honor that team this weekend. 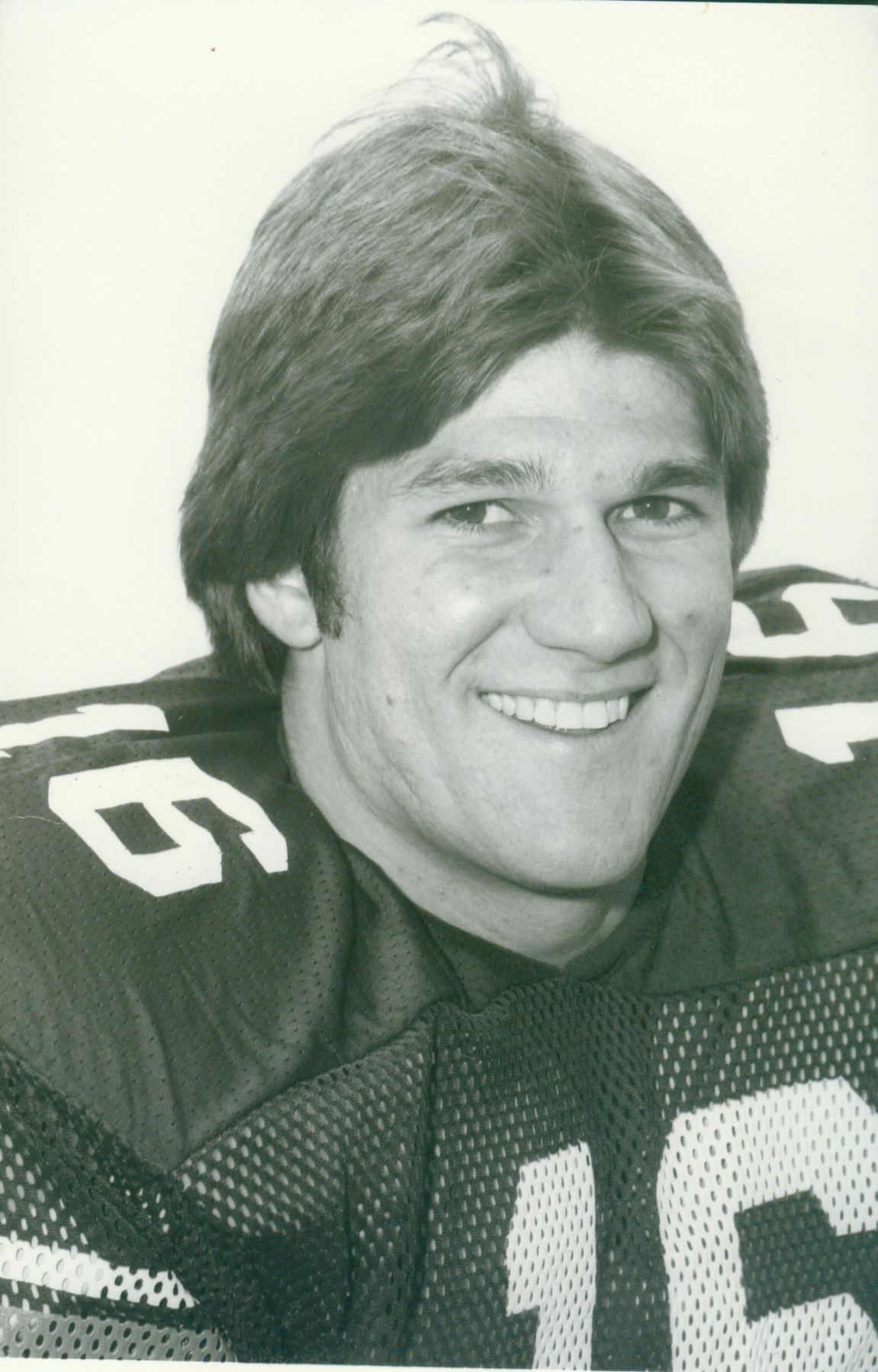 Todd Rubley was an all-state quarterback on Davenport West's 1977 state championship team. Rubley plans to return this weekend for the squad's 40th reunion.

CJ Busch has been envious of his father this week.

As Davenport West prepares to recognize its 1977 Iowa Class 4A state title-winning football team this weekend, Phil "Bubba" Busch has been sporting his championship ring around the house.

Phil was an offensive lineman on that squad coached by Roger Harrington. His son, CJ, is a senior and a captain on this year's West team.

"He's been wearing that ring non-stop," CJ said. "It has been fantastic, but it makes me a little jealous wanting to have one."

For 40 years, Phil and his classmates have savored their achievement.

But since 1987, the players and coaches on West's last state championship football team have not had a formal reunion.

Darl Osborne, a captain and defensive stalwart, was determined to change that.

When Osborne proposed the idea of a 40-year reunion to Seline back in January, they weren't certain what it would entail.

With more than $5,500 raised in donations, it has evolved into something much bigger than burgers and drinks among a few guys.

More than 100 former players and coaches along with wives are expected to attend. Among that contingent is all-state quarterback Todd Rubley from Houston, Texas, and back Steve Wallace from California.

Osborne created a Facebook page group specifically for the '77 team. He scoured the internet and even subscribed to a Whitepages Premium service to track down teammates.

"Trying to find (60 to 65) people after 40 years is a very difficult thing to do," Osborne said. "Facebook and word of mouth helped a lot.

"We wanted every person to at least have the choice if they wanted to come or not, and we've got people from all across the country coming."

Vivan Ragusa, who served in the U.S. Navy as an F/A-18 pilot, played on that team but died in 2011. Osborne said Ragusa's wife and three children are planning on coming from Georgia.

"Darl was bound and determined to track down every person on this team," Seline stated. "He put a lot of time and energy into this."

It won't just be three days of reliving the glory season. The '77 team plans to interact with the current group of Falcons.

They'll serve dinner and give a pep talk to this season's squad at their pregame meal following Thursday's practice.

"Some of our guys don't know about the culture we had here," CJ Busch said. "West hasn't always been in a position we are now.

"They were a juggernaut. It was a different time since North wasn't around then, but it is cool for our guys to see that West did have a winning tradition. It is possible we can win a championship here."

Osborne and Seline said the objective is to lend support and encouragement, not to share how great their team was or that they have to follow in their footsteps.

West hasn't had a winning season since '99. The Falcons are looking to snap a 16-game losing streak Friday against city-rival Central.

"We have such a love for West and we want them to do well," Seline said. "It pains me on Friday nights to see the score sometimes.

"It is easy to be in a program when you're winning, but it is a lot harder when you're losing and you've got kids that are committed and a leader like coach (Justin) Peters working hard to push through that."

On Friday, the '77 team will attend the football game at Brady Street Stadium. Before the contest, Harrington will be one of the inductees into the Davenport Ring of Honor.

At halftime, the '77 squad will be introduced with a montage expected to play on the video scoreboard.

Then on Saturday, the team will gather for a reunion dinner. They'll show the video of the 21-14 championship win over Newton along with more than 270 slides with '70s music playing in the background.

With five players from that team already deceased and several others battling health problems, including Harrington, Osborne explained it was imperative to get the team back together.

"We're getting older," he said. "In 10 years, we'll be 68, and that's if we're granted the life we want to have. Some people are struggling right now. Our coaches will be in their mid- to upper 80s then."

West was the largest high school in Iowa during the 1970s. Osborne said his graduating class in '78 was around 715 students.

"We had a lot of push from behind," Osborne said. "We had at least eight to 10 middle linebackers on that team. Some of those kids could have actually gone somewhere else and played."

Competing in the Quad-Cities metro conference, the Falcons lost twice during the regular season to Moline and Dubuque Wahlert (non-league game).

In the eight-team 4A playoffs, three of the schools hailed from Davenport in West, Central and Assumption. The Falcons beat Dubuque Hempstead in the quarterfinals 27-21 and upended Assumption 20-3 in the semifinals.

Besides a powerful offense led by Rubley, who went on to play at Auburn, and fullback Ben Juehring, West had a stifling defense with Osborne, Seline and Dunn. It resulted in a second title-game appearance in four seasons.

"The common denominator was you had really good coaching, had players that were very competitive and we meshed very, very well," Seline said.

Even after going 10 to 20 years between seeing some of his teammates, Seline said they immediately picked up where they left off.

"It was a very diverse group economically, but that didn't matter," Seline explained. "We all blended very well and enjoyed each other's company.

"It is a brotherhood."

In the championship game, Rick Keller had two interceptions for the Falcons. The second came in the final minute to secure Harrington's second title at West and the fourth for the city of Davenport in a five-year period.

Both sides of Brady Street Stadium were packed for games on Friday nights.

"The athletic program was very, very strong, not just at West but across the city," Seline said. "We were raised in this culture where you just won."

Peters is trying to bring that mentality back to West.

There are plenty of obstacles. Besides an additional high school in town, open enrollment is more prevalent. Specialization has impacted participation.

Peters said it is important for his team to rub shoulders with West's past.

"To honor the guys on that '77 team, we're bringing back that winning mentality and culture. The pride these guys have in West High is second to none."

When West made the trip to Burlington for last year's game, the team watched the film of the '77 championship game for inspiration.

It was an opportunity for CJ Busch to see his father on the field.

"It was kind of funny and weird," CJ Busch said. "It is creepy to see him with no facial hair."

Still, the Falcons of '77 take great pride in what they accomplished. That life-changing season spurred many of them to successful professional careers.

"It wan an experience that was very special with a special group of people," Osborne said. "I carry it with me today.

"It has made me a lot more confident and I attribute that to the discipline and teamwork instilled in us."

Davenport West's Todd Rubley, right, and Darl Osborne hold the state championship trophy at a rally following the Falcons' win over Newton in 1977.

Members of the 1977 Davenport West football team celebrate their state trophy after beating Newton in the state championship game at the UNI-Dome in Cedar Falls, Iowa.

West quarterback Todd Rubley follows his center, Cary Sones, 50, into the end zone to give the Falcons a 6-0 lead during a game in 1977. The Falcons won the state championship that year.

Roger Harrington directed Davenport West to two state championships, the last in 1977. The Falcons will honor that team this weekend.

Todd Rubley was an all-state quarterback on Davenport West's 1977 state championship team. Rubley plans to return this weekend for the squad's 40th reunion.