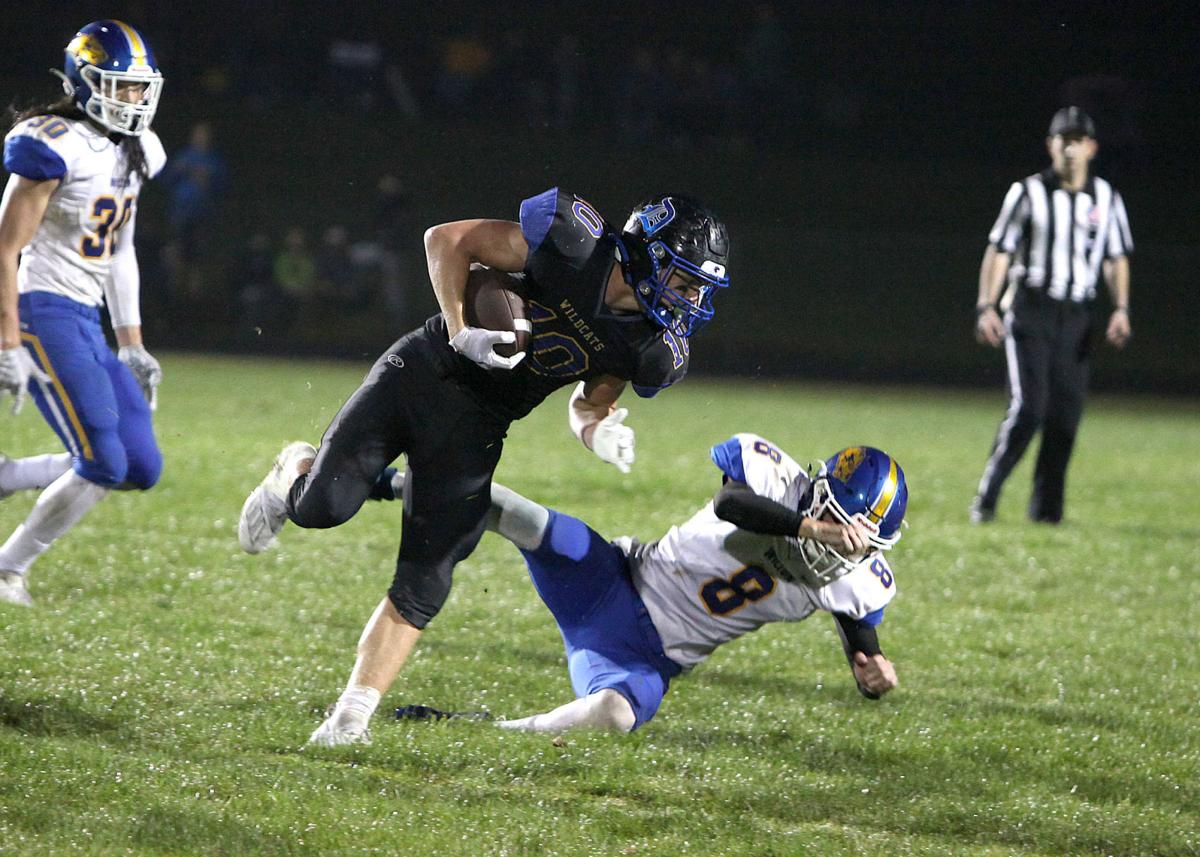 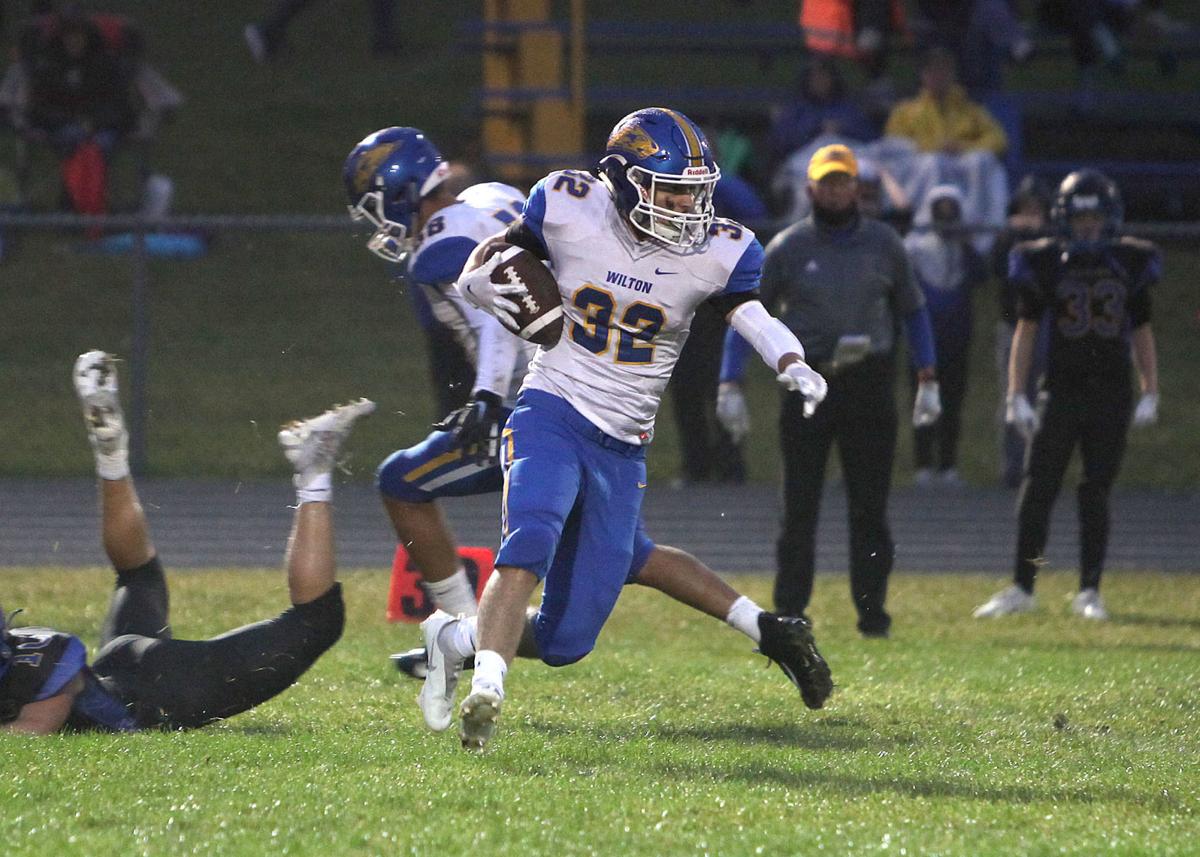 Wilton's Jacob Stone finds a hole up the middle for a big gain during the first quarter of game against Durant, Friday, Sept. 11, 2020. 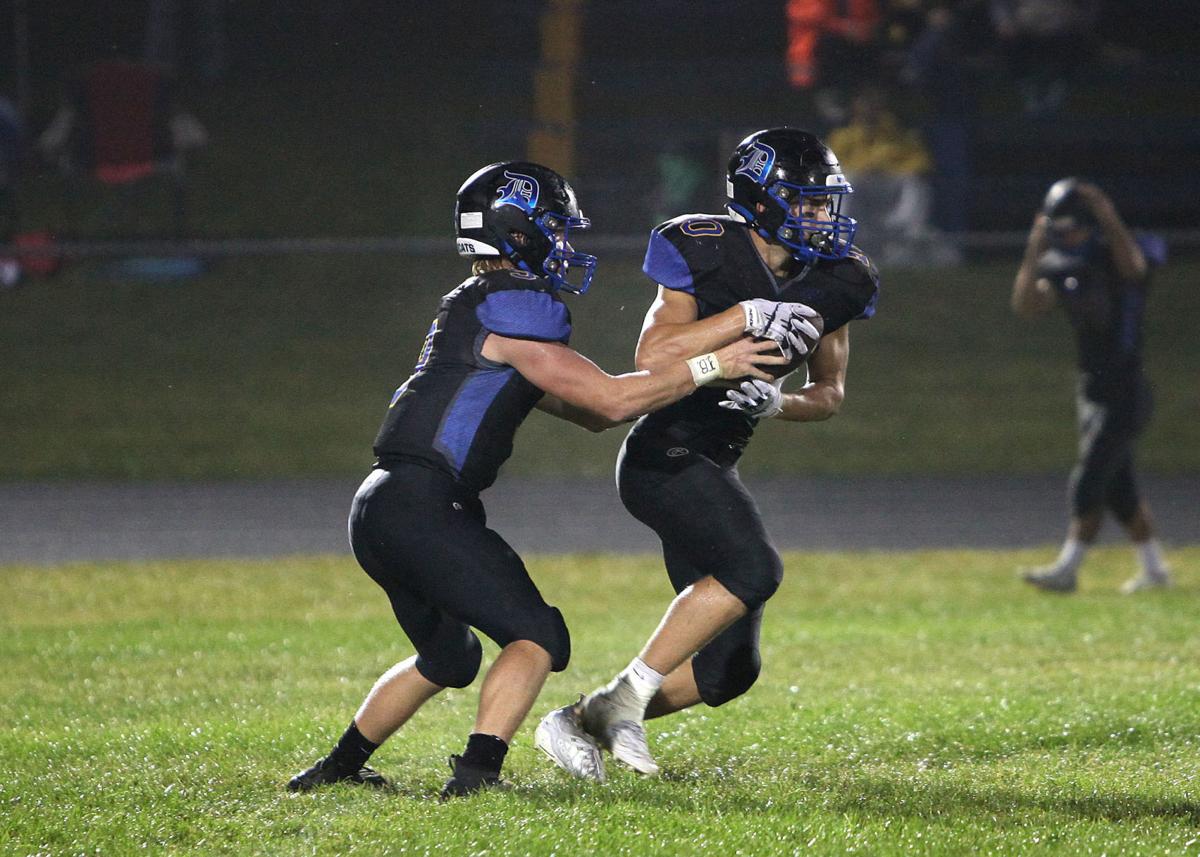 Durant quarterback Keagen Head hands the ball of to Nolan DeLong during the second quarter of their game against Wilton on Friday.

DURANT — Over the first two games, Durant passed the football a total of 10 times with just four completions from Keagen Head.

When the critical play was needed, the ball was put in Head’s hands.

The senior tossed two fourth-quarter touchdowns, came away with an interception and a fumble on defense to ignite the Wildcats to a 35-28 triumph over Wilton Friday night at Durant High School.

After 20 years of losing to their rivals on Highway 6, the Class 1A No. 9 Wildcats have won two straight meetings.

“It was a wild game,” Durant coach Joe Diederichs said. “It turned out to be a beautiful high school football game. I was happy with (Keagen) running tonight, I was happy with him passing.”

Nolan DeLong torched North Cedar and Louisa-Muscatine with 542 yards on the ground and nine touchdowns. Against Wilton, the sophomore tallied 186 yards, including a 20-yard scamper for the final of 12 first downs to end the game, and a touchdown.

Yet it was Head and receivers Carter Wilchelt and Tony Dillabough who kept the Wildcats (3-0) perfect.

Leading 21-20, Head tossed the ball over a double team in the end zone into the basket of Wilchelt for the 24-yard score to make it a two-possession game.

“He’s a good player, he made me look good,” Head said of Wilchelt.

Then, after the Durant defense forced the Beavers (1-2) to turn the ball over on downs for the second straight drive, Head found Dillabough across the middle of the field on 3rd and 13 and the senior wideout broke a tackle to score and up the lead to 15 points.

Head was 9-of-14 for 168 yards passing while Dillabough brought in four catches for 126 yards.

“Whatever works, we play to what they give us,” said Head, who added 58 yards on the ground. “Tonight, they game planned pretty well (for) Nolan. The best teams are balanced teams.

“With a running game like that, you have to have a passing game to match it.”

Despite quarterback Caleb Sawvell getting picked at the goal line with under two minutes left, its defense forced DeLong to cough up the ball at the Durant 12-yard line.

Sawvell took it from there and crept the Beavers within a score following his touchdown run and two-point conversion.

The ensuing onside kickoff went out of bounds to seal Wilton’s fate. Sawvell ended the night with 156 yards rushing, 70 passing and two TDs.

“It was about us not being able to tackle and that’s what hurt us,” Wilton coach Ryan Hetzler said. “This team’s got to learn we can’t come out sluggish. If we come out right away, we can be a good team.”

It took a grand total of 23 seconds for both sides to light up the scoreboard.

After Wilton attempted an onside kick that set Durant up on its own 42-yard line, DeLong took the handoff to the right side and raced down the sideline for a 58-yard touchdown.

On the ensuing kickoff, the Beavers’ Gage Rosenkild found an opening, juked the kicker and took it 86 yards to the house to make it a 7-6 game after a failed two-point conversion.

Then, Head took over.

Head recovered a Wilton fumble and on the next drive, kept the ball on a read option and scored from 35 yards to up the lead to 14-6.

On just his second pass of the first half, Sawvell found Caden Kirkman on a goal-line slant for five yards which came before Jackson Hull went untouched on the two-point try to tie the game at 14.

Wilchelt took the ensuing kickoff to Wilton’s 46-yard line and set up the drive that gave Durant the lead for good.

The Wildcats fended off two penalties inside the Wilton 10-yard line to take the lead on Head swerving his way through the defense for the 12-yard score and the seven-point advantage at the half.

“(Wilchelt) did an excellent job, he stepped up tonight,” Diederichs said. “It’s awesome, I’m at a loss for words.”

No. 5 Spartans run past Bulldogs, snap losing streak against rival

Muscatine pulls away from North in fourth quarter

Davenport North piled up over 300 yards of offense.

Wilton's Jacob Stone finds a hole up the middle for a big gain during the first quarter of game against Durant, Friday, Sept. 11, 2020.

Durant quarterback Keagen Head hands the ball of to Nolan DeLong during the second quarter of their game against Wilton on Friday.