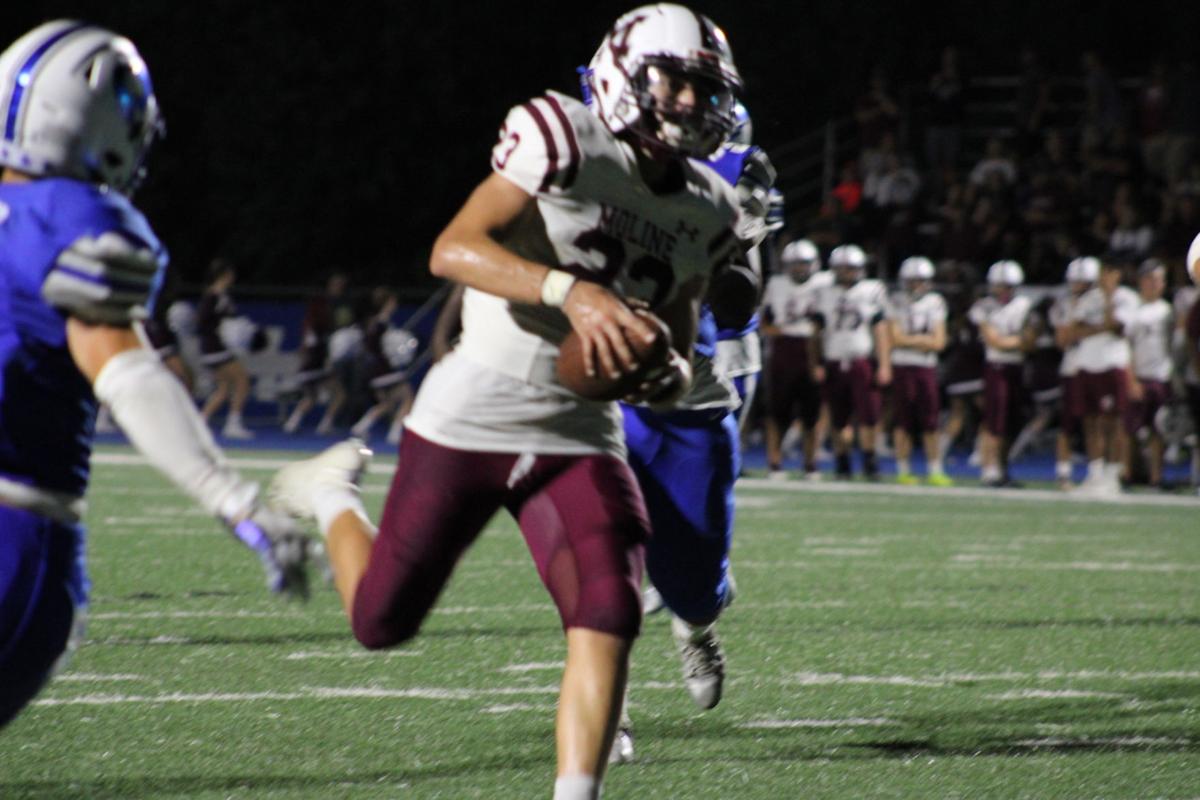 Moline High School running back Christian Raya, like most of the other Maroons, had plenty of room to run Friday night at Flinn Stadium. The Maroons used a solid rushing attack and some big plays to pull away for a 48-35 Western Big 6 Conference victory over the hosting Blue Devils to open league play. 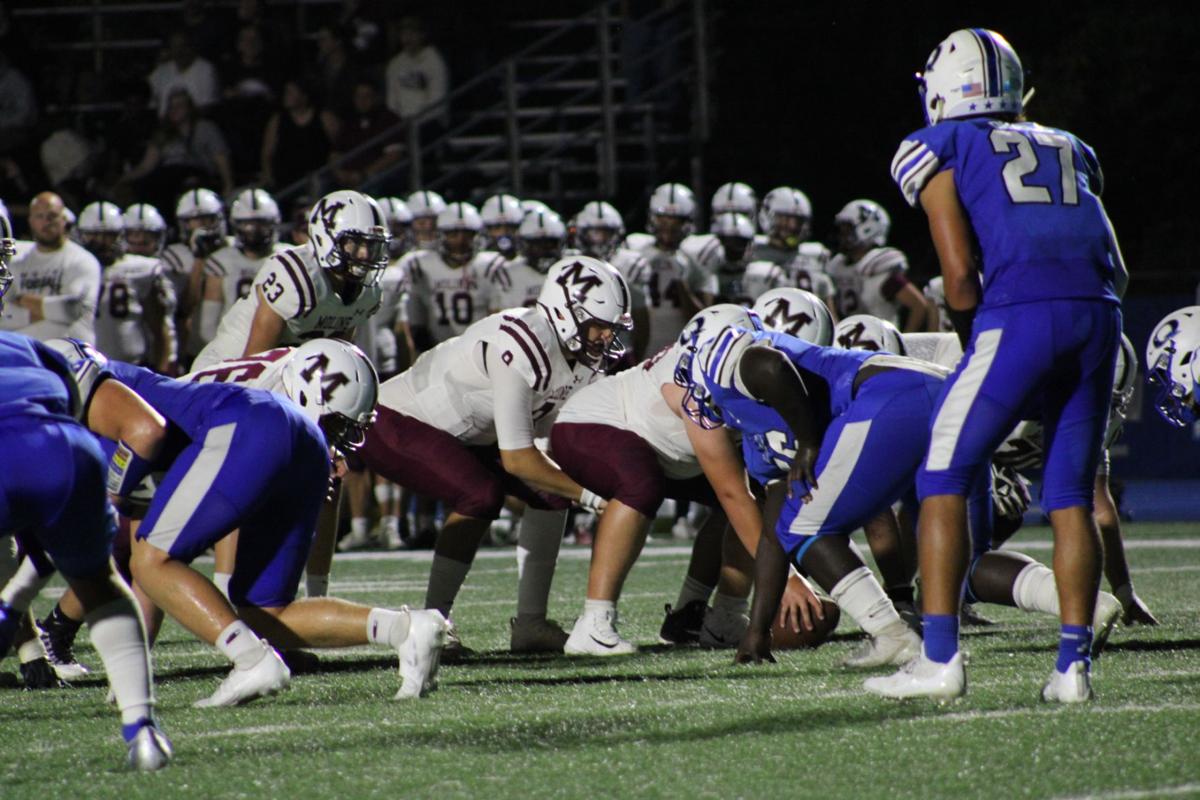 Moline quarterback Alec Ponder had the Maroons set up pick apart the Quincy defense in Friday's Western Big 6 Conference opener at Flinn Stadium. Ponder connected on third-quarter scoring passes of 51- and 55-yards in leading the Maroons to a 48-35 victory over the Blue Devils.

QUINCY, Ill. — The Moline High School football team was in a shootout in the first half of Friday's Western Big 6 Conference opener at Flinn Stadium.

In the second half, the Maroons exerted their might on the hosting Quincy Blue Devils en route to a 48-35 league victory after trailing 28-21 at halftime.

After a back-and-forth first half, the Maroons scored on their first four possessions out of the halftime break to break open a tight game.

“Nice show of character in the second half," Moline coach Mike Morrissey told his team in a short and sweet post-game huddle after the late-ending game. "That’s the type of football we want to play."

In the third quarter, Moline dominated play up front on both sides. Offensively, that helped Moline amass 619 yards.

Moline's defense gave up just one first down on Quincy's first three second-half possessions as the Maroons rattled off their four scores.

After forcing a Quincy punt, the Maroons drove 88 yards in eight plays with Gavin Grace capping that drive with his second 2-yard TD plunge of the game. Hazen’s PAT boot gave the Maroons a 35-28 lead.

Another defensive stand that gave up just one passing first down got Moline the ball back and the Maroons struck quickly. On the second-play of that 58-yard drive, Senior QB Alec Ponder hit Cranston Wall for a 55-yard scoring strike. The Maroons attempted a fake on the conversion, but Wall’s pass failed, leaving Moline ahead 41-28 with 3:14 left in the third.

The Maroons (2-1, 1-0 Big 6) stretched their advantage to 48-28 on the first play of the fourth quarter when Ponder found a wide open Matthew Bailey for a 51-yard scoring strike that capped a 4-play, 62-yard attack. Hazen's point-after boot was good.

Quincy (1-2, 0-1 Big 6) finally got on the scoreboard again after making a switch at quarterback when freshman Bradyn Little entered the game, but he couldn’t rally the Blue Devils any further as the Maroons and Riley Fuller played keep away and ran the clock down inside of two minutes left in regulation before turning over the ball.

Fuller, who scored on two long runs in the first half, finished with 252 rushing yards on a whopping 37 carries.

Thanks to the two long TD strikes, Ponder finished with 224 yards passing, completing 10 of 19 attempts. He found Bailey and Wall three times each, with both covering 78 yards in those grabs.

In the first half, the teams scored seven touchdowns in the 14 possessions they totaled. Quincy closed the dragged-out first half with a 12-play, 57-yard scoring drive that was aided by two 15-yard pass interference penalties. That drive was capped when sophomores Adon Byquist found Jack Mettemeyer for a 5-yard scoring toss – his third scoring toss of the half. Byquist then found Brian Douglas on the two-point conversion pass that gave the Blue Devils a 28-21 lead at the break.

In that first half, the Maroons rode Riley Fuller’s big plays. The junior exploded for TD runs of 25 and 56 yards.

Gavin Grace scored Moline’s other TD, a 2-yard plunge that capped a 13-play, 82-yard drive that forged a 14-all tie with 7:25 left in the second quarter.

Fuller’s 56-yarder followed a defensive stop and gave the Maroons a 21-14 lead with 5:34 left in the half. That was his fourth gain of at least 11 yards and pushed his first-half yardage to over 150 yards.

But Quincy wasn’t worried about time running short as Byquist hit Tyson Douglas with a 21-yard scoring strike with 4:18 left, but the PAT kick was missed, leaving Moline with a 21-20 lead.

However, a quick three-and-out for the Maroons gave the hosts the ball with 3:10 left on the clock and Byquist – with the help of those two big Moline penalties – was more than enough for the hosts to drive and take the halftime lead.

Moline High School running back Christian Raya, like most of the other Maroons, had plenty of room to run Friday night at Flinn Stadium. The Maroons used a solid rushing attack and some big plays to pull away for a 48-35 Western Big 6 Conference victory over the hosting Blue Devils to open league play.

Moline quarterback Alec Ponder had the Maroons set up pick apart the Quincy defense in Friday's Western Big 6 Conference opener at Flinn Stadium. Ponder connected on third-quarter scoring passes of 51- and 55-yards in leading the Maroons to a 48-35 victory over the Blue Devils.