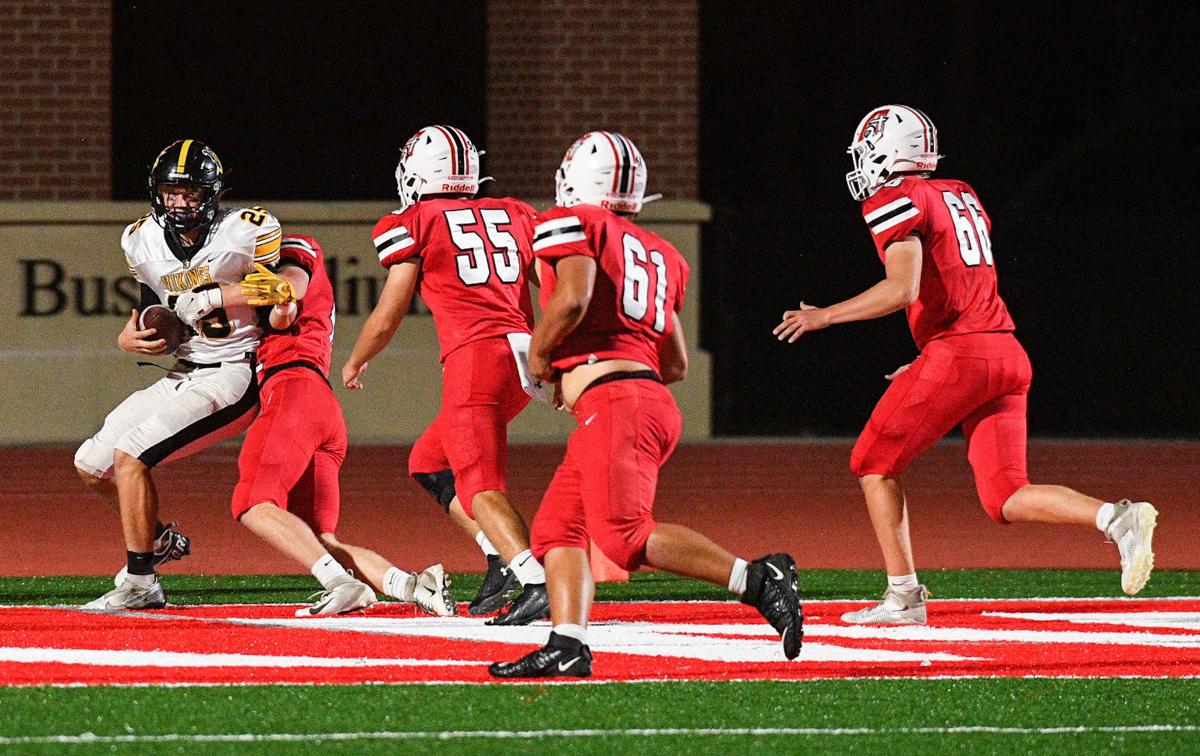 Assumption's Cale Preston tackles Vinton-Shellsburg's Jesse Gray for a safety during their game at Jack and Pat Bush Stadium Thursday in Davenport. 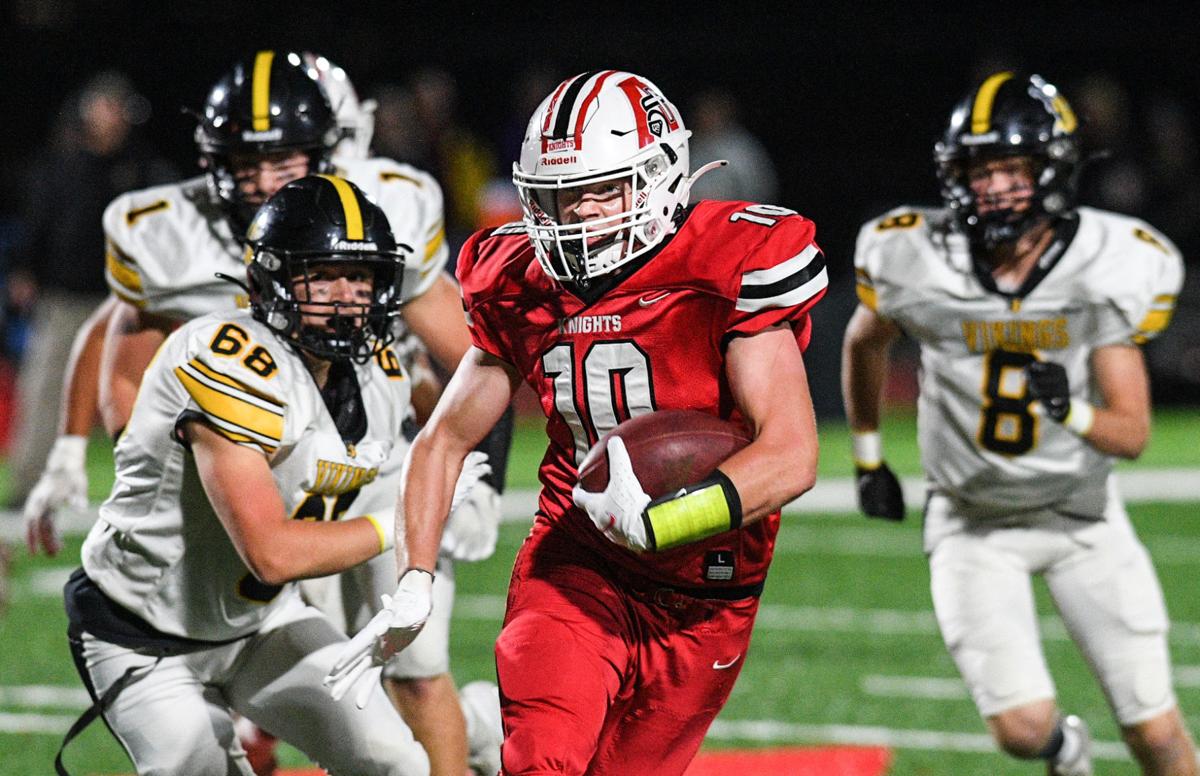 Assumption's John Argo runs the ball past Vinton-Shellsburg's Alex Funk during their game at Jack and Pat Bush Stadium Thursday in Davenport.

Then the Knights held off a late Viking rally to earn a 28-21 win at Jack and Pat Bush Stadium.

“It wasn’t ideal, but at the end of the day we got the job done,” Assumption quarterback Ayden Weiman said.

The game started ideally for the Knights, who took the opening kickoff and marched 69 yards to score. Senior running back John Argo rushed for 64 yards on the drive, and his 11-yard carry on fourth-and-10 kept the drive alive. He scored from 17 yards out on the next play.

“On plays where we ran the ball without penalties, we were having success,” said Argo, who rushed for 130 yards and two touchdowns on 20 carries in the contest. “So we knew that was our bread and butter and that we could go to that.”

Assumption’s defense forced Vinton-Shellsburg to go three-and-out, and the Viking punter was tackled in the end zone for a safety after a bad snap. Two plays later, Weiman faked a handoff to Argo and sprinted up the middle untouched for a 59-yard touchdown.

“I saw there was an opening and took it,” said Weiman, who ran for 74 yards on the night. “(The hole) was pretty big. The line did a good job blocking them outside. I read the end and I cut upfield.”

Just a little over halfway through the first quarter, Assumption led 16-0.

“We came out hot,” Weiman said.

Vinton-Shellsburg (2-6, 1-3 District 4) gained just 18 total yards and two first downs before the break. But the Vikings began to put things together in the third quarter. They drove 83 yards for a score, capped by Maximo Vasquez’s 1-yard touchdown run.

When Argo scored from two yards out with just 5:33 remaining in the game, and then Vinton-Shellsburg quarterback Kaden Kingsbury was intercepted by Jackson Wohlers on the next possession, the game appeared to be over. However, Vinton-Shellsburg’s Cooper Sanders recovered a fumble at the Assumption 10, and Kingsbury found Hudson Carolan for a touchdown. After another Assumption fumble, Kingsbury ran for a 6-yard touchdown that cut the lead to 28-21 with 38 seconds left.

Assumption recovered the ensuing onside kick and was able to run the final seconds off the clock to secure the victory.

“We had our issues tonight. We had a hard time closing the game out,” Assumption head coach Wade King said. “We can’t put the ball on the ground. We had the game pretty well salted away, and we decided to let them back in. That’s something we’re going to have to work on this week in practice.”

Fifteen seniors were honored prior to the start of Thursday’s game, including Argo and Weiman.

“It was a great way to end my senior year at home, but it’s not a place that I ever want to leave,” Argo said. “Next time I come in here, I’m going to have to buy a ticket, and that’s a sad thing to realize. But we’ve got a couple games left, and hopefully we can make a run.”

DEWITT — The Central DeWitt football team just did not have an answer for Mount Vernon senior tailback Trent Pitlik on Friday night.

Assumption's Cale Preston tackles Vinton-Shellsburg's Jesse Gray for a safety during their game at Jack and Pat Bush Stadium Thursday in Davenport.

Assumption's John Argo runs the ball past Vinton-Shellsburg's Alex Funk during their game at Jack and Pat Bush Stadium Thursday in Davenport.