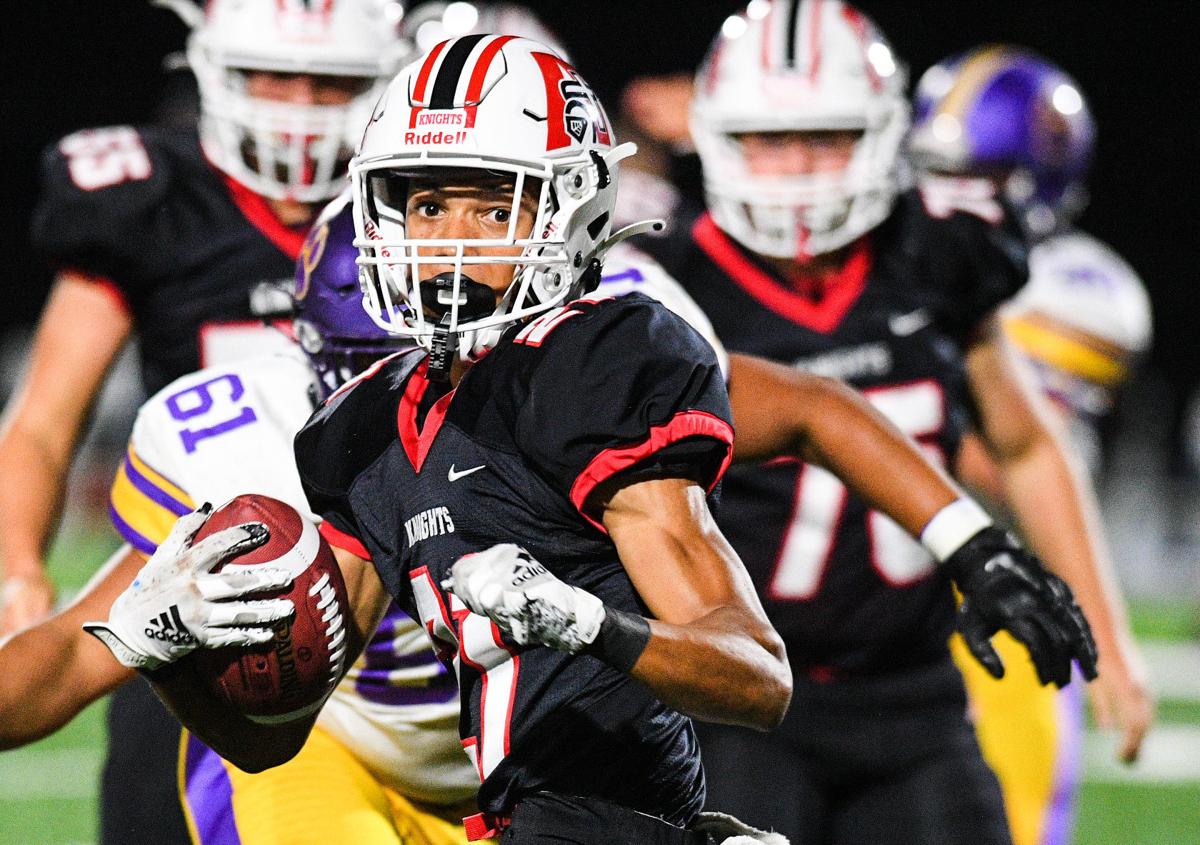 Assumption's Angelo Jackson (21) rushed for 105 yards and two touchdowns Thursday night as the Knights snapped a two-game losing streak with a 41-10 win over Central DeWitt. 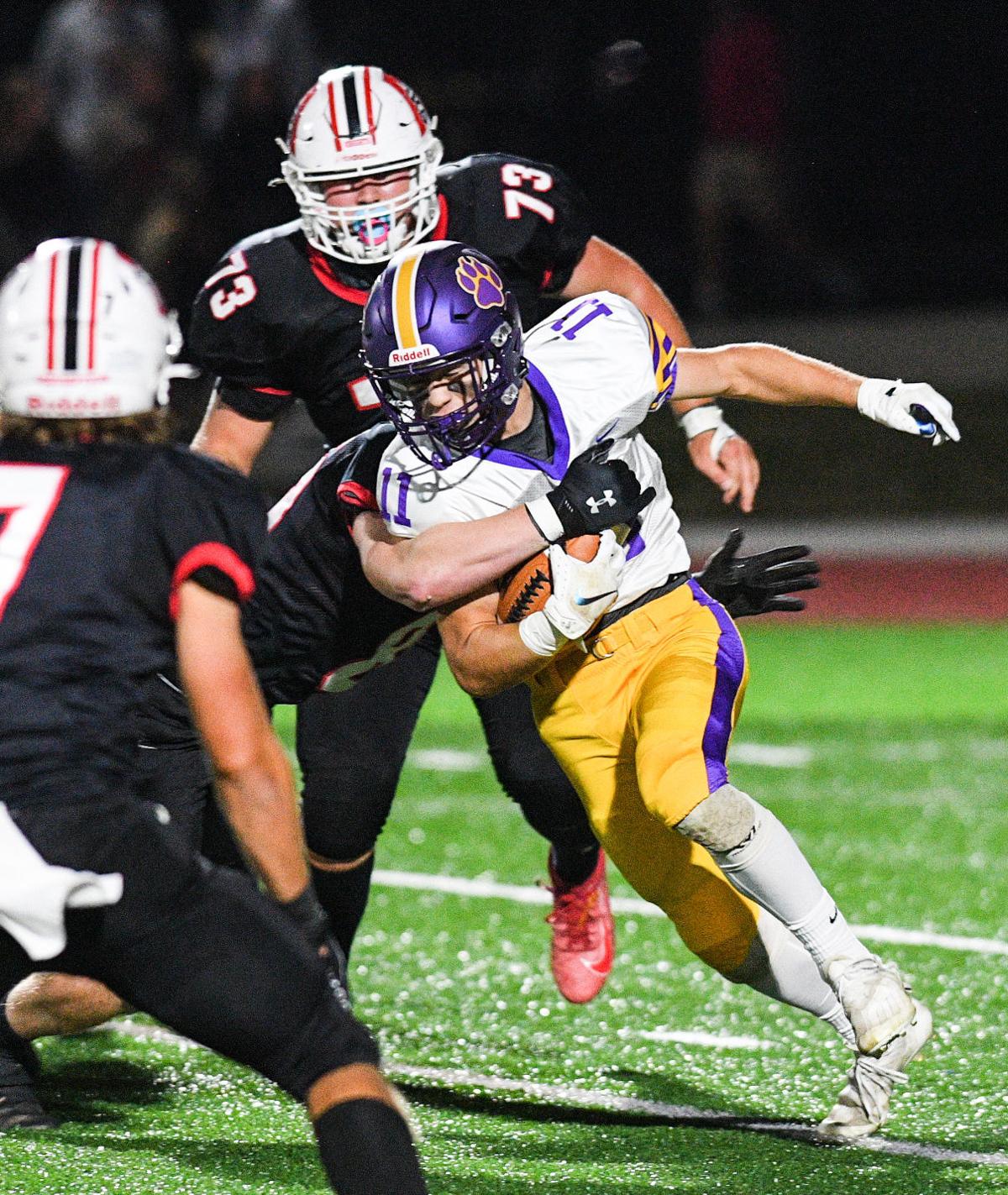 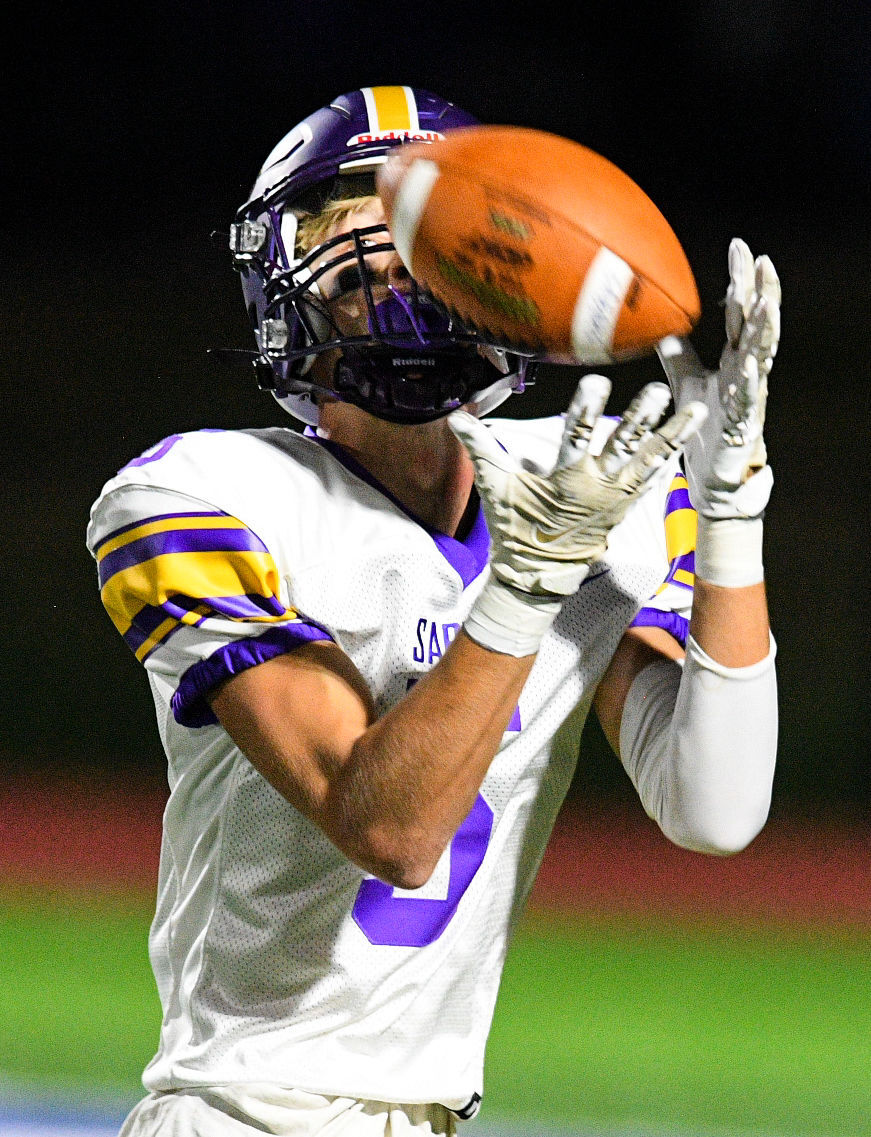 Central DeWitt's Gibson McEwen (5) pulls in a pass against Assumption during their game at Jack and Pat Bush Stadium on Thursday. 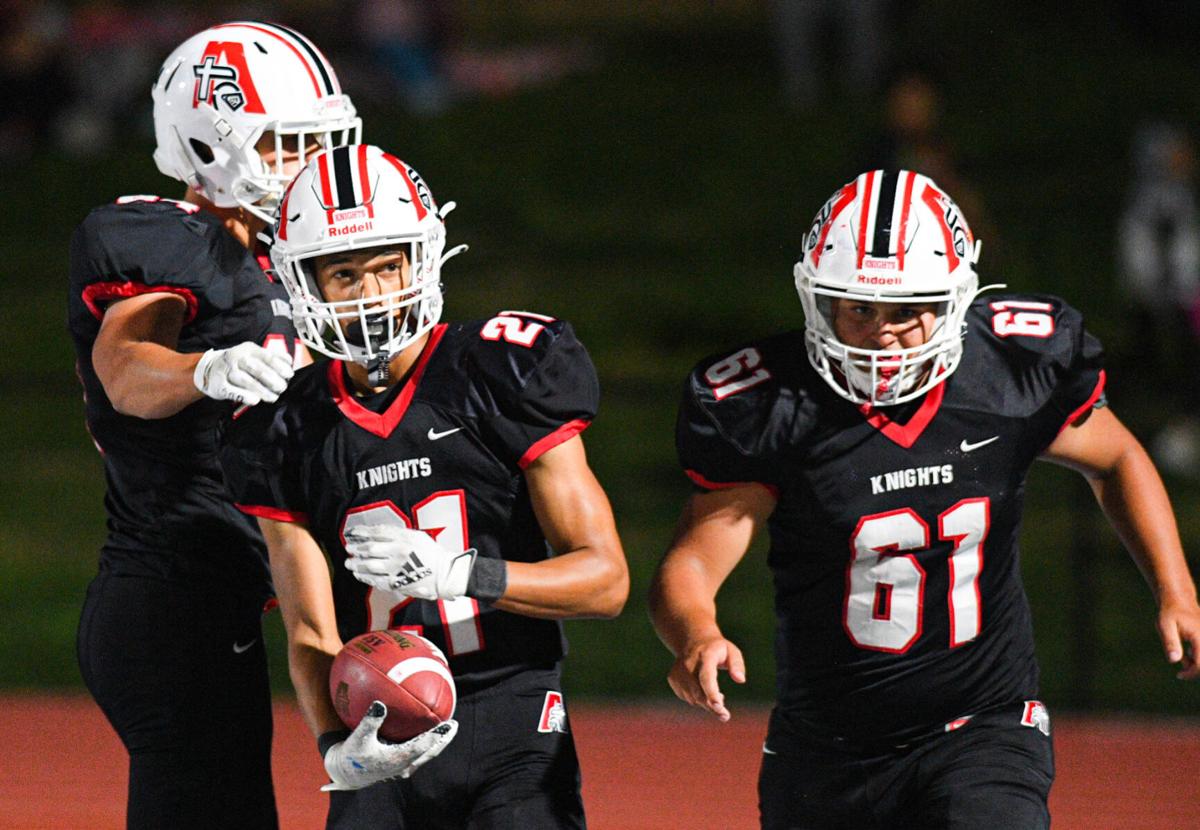 Assumption's Angelo Jackson (21) and teammates celebrate a touchdown against Central DeWitt during their game at Jack and Pat Bush Stadium on Thursday in Davenport. Assumption prevailed 41-10.

One area flipped the game in the Knights’ favor. Turnovers.

After getting walloped the past two weeks, Assumption turned four Central DeWitt miscues into 24 points to register a 41-10 homecoming victory at Jack and Pat Bush Stadium.

“You’re going to lose no matter who you play with four turnovers,” Sabers coach Ryan Streets said. “Errant pass, interception, fumble for a touchdown, it was pretty ugly.”

Central DeWitt, in fact, led 10-7 late in the second quarter before David Neuberger picked off a Paul Kuehn pass. Two plays later, John Argo marched in from 26 yards to give the Knights the lead.

In the third quarter, Assumption (3-2, 1-0) put its foot down in the district opener.

Argo darted in from 41 yards on the opening possession to make it 21-10. Cale Preston intercepted a Kuehn pass and returned it inside the Sabers’ 10. It eventually led to a Billy Moore field goal.

Then on the ensuing possession, a Central DeWitt pitch fell on the turf. Derrick Bass scooped it up and scored from seven yards. Bass followed with an interception on the next play and Assumption capitalized on a short field.

In nearly 12 minutes of game time, Assumption went from trailing by three to up 28.

“It seemed like a lot tighter game (than 41-10),” Assumption coach Wade King said. “Our kids stayed with it. They competed through a tough first half, and we came out in the second half ready to play.”

Assumption, meanwhile, never turned the ball over in the game. The Knights finished with 302 total yards to the Sabers' 285.

“Once we got that ball rolling, we stayed on it all night,” said Argo, who finished with 143 yards on 17 carries. “We collected ourselves as a defense and started playing hard. We just fed off that energy.”

Jackson had 12 rushes for 105 yards and two touchdowns.

“Lightning and thunder with me and Johnny in the backfield,” Jackson said. “It is nice to be able to switch it up all the time.”

The Knights have played five games and none of them have been decided by less than 24 points. Assumption heads on the road for the next two weeks to play Mount Vernon and Benton Community.

King admitted he doesn’t have a strong handle on his team yet past the midway point.

“We’re capable,” he said. “We have some kids that can make some big plays when things break, but we just lack consistency. We make mistakes and get behind (the sticks) and we struggle at that point. We’ve got to stay on schedule to really click.”

Four takeaways can go a long way in overcoming some offensive deficiencies.

“I think we’re still learning about ourselves yet,” Argo said. “We’re still learning to play throughout 48 minutes. We haven’t had any crazy, super-tight games yet where guys have been put in that situation. In the meantime, we’re kind of growing.”

Central DeWitt was efficient early. Kuehn completed 11 of his first 16 passes for 150 yards, including a 32-yard touchdown to Gibson McEwen in the second quarter. Kuehn, though, never completed a pass in the second half.

The Sabers (3-2, 0-1) return home to play Maquoketa next Friday night.

“It seems like we’re up and down,” Streets said. “We still haven’t played our best yet. You can’t show me one game where we haven’t turned the ball over three times, and they aren’t a normal turnover where someone makes a great play or a strip.

Photos: Assumption celebrates homecoming with a 41-10 win over Central DeWitt

Tonight's Bettendorf High School football game at Iowa City West has been cancelled because of COVID-related issues within the Trojans' program.

The last of the Argos: John Argo makes his mark on Assumption football

John Argo is this week's Iowa Pacesetter. Argo rushed for a career-high 241 yards and three touchdowns for Davenport Assumption a week ago.

A look at Thursday night's prep football game between Vinton-Shellsburg and Davenport Assumption at Jack and Pat Bush Stadium.

Assumption's Angelo Jackson (21) rushed for 105 yards and two touchdowns Thursday night as the Knights snapped a two-game losing streak with a 41-10 win over Central DeWitt.

Central DeWitt's Gibson McEwen (5) pulls in a pass against Assumption during their game at Jack and Pat Bush Stadium on Thursday.

Assumption's Angelo Jackson (21) and teammates celebrate a touchdown against Central DeWitt during their game at Jack and Pat Bush Stadium on Thursday in Davenport. Assumption prevailed 41-10.