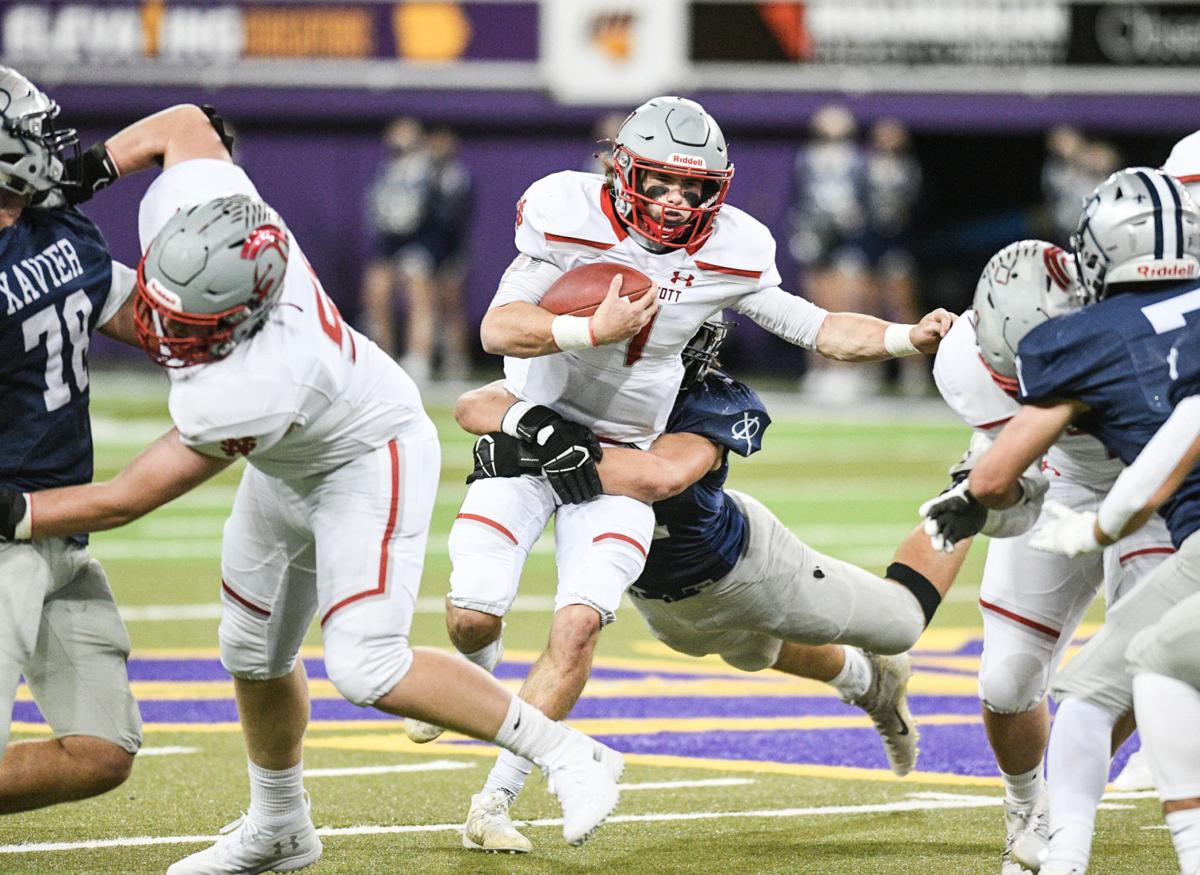 North Scott's Carter Markham (7) is tackled by a Cedar Rapids Xavier defender during the Class 3A state football semifinal at the UNI-Dome last Thursday. Markham has compiled 1,642 yards of offense and 18 touchdowns in seven games for the Lancers. 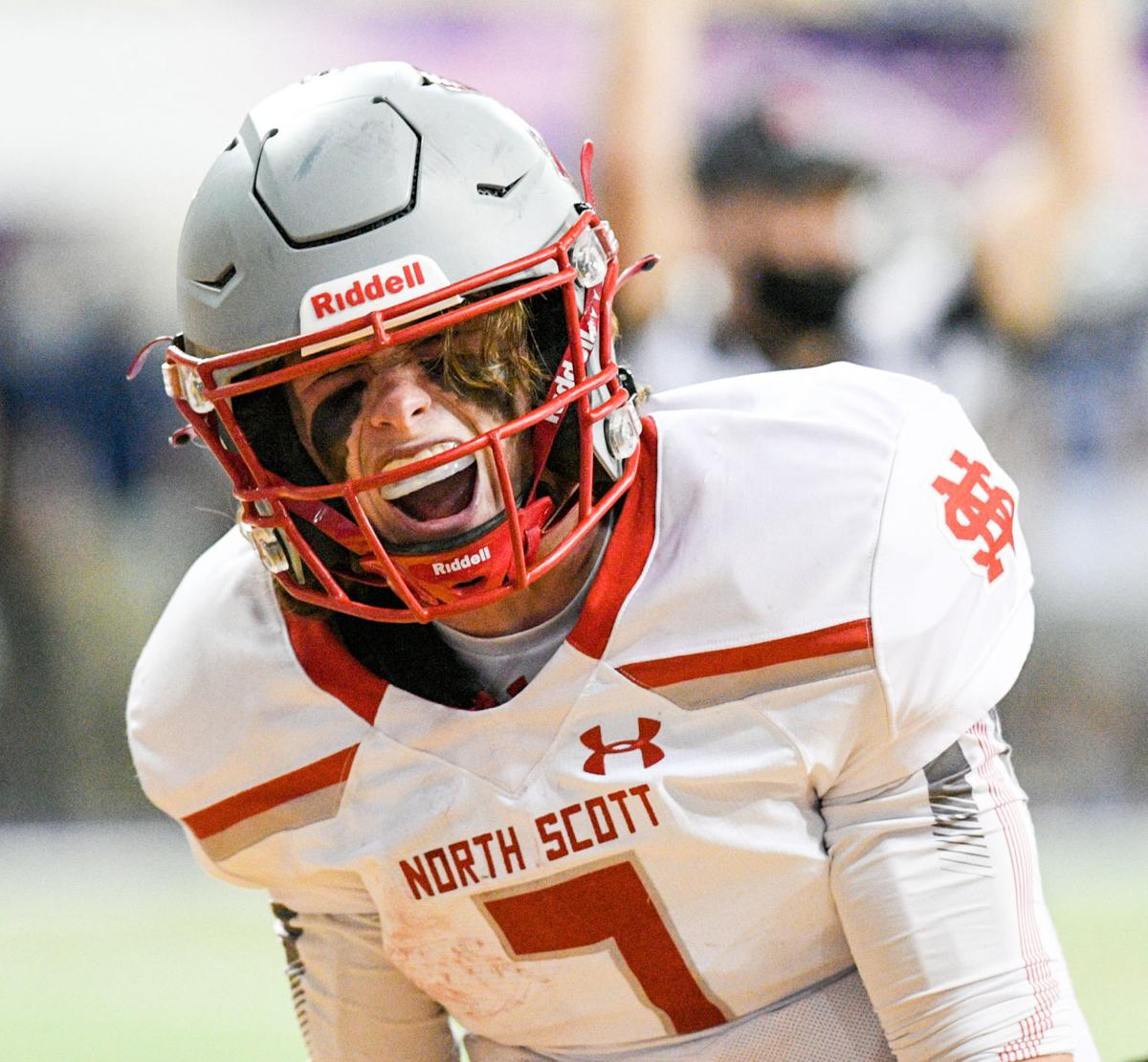 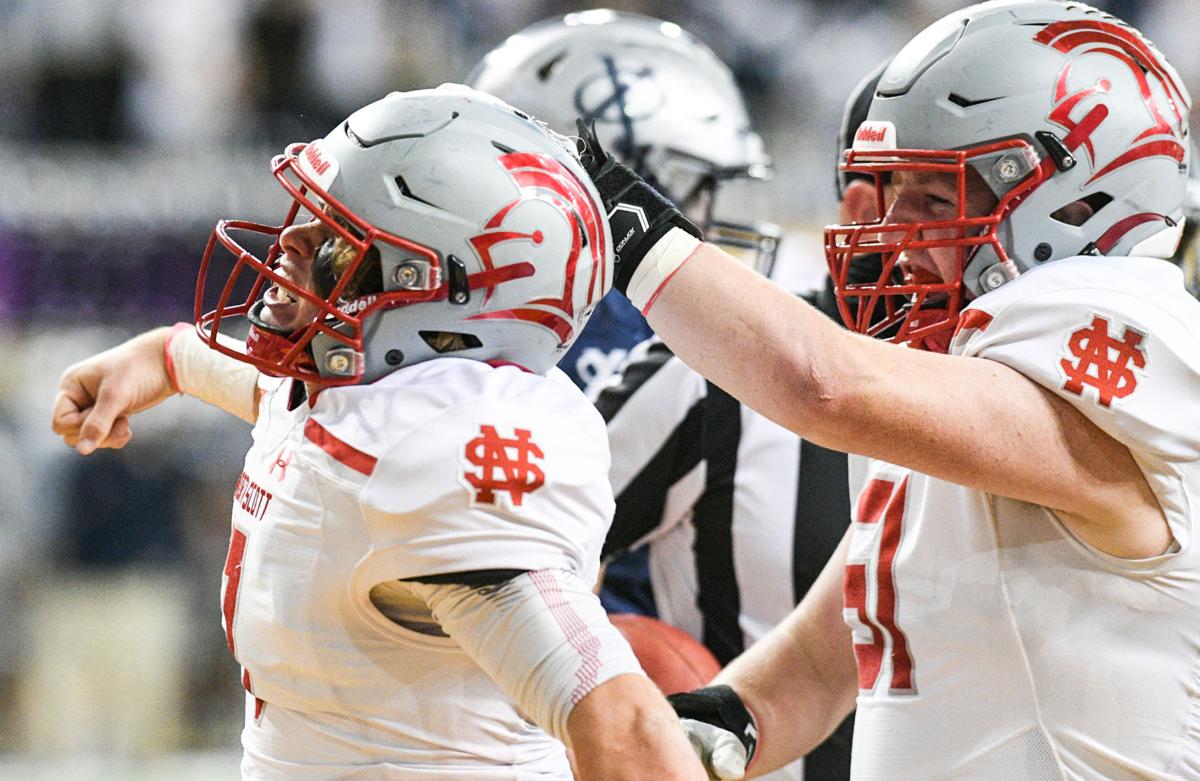 North Scott's Carter Markham celebrates a touchdown against Cedar Rapids Xavier during the Class 3A state football semifinal at the UNI-Dome last week in Cedar Falls. 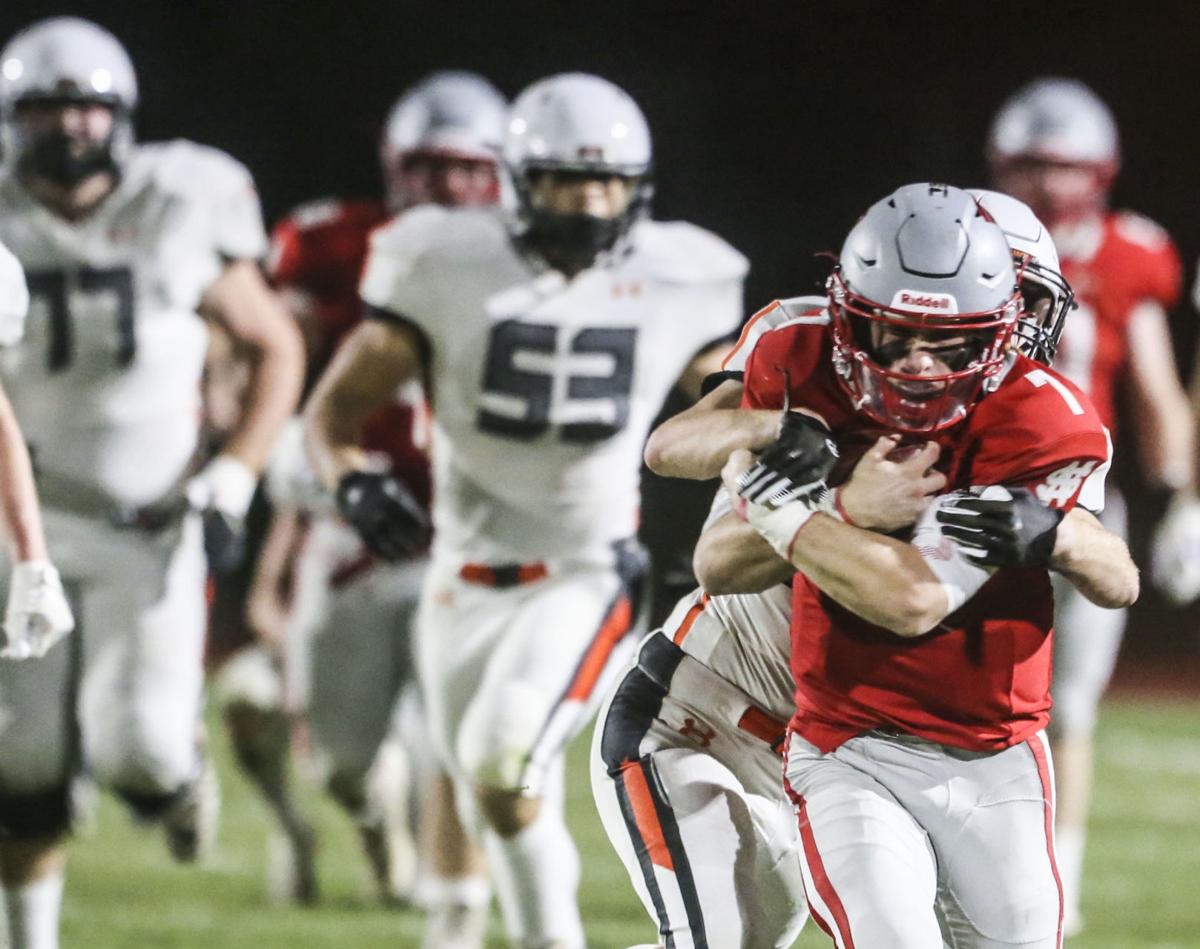 ELDRIDGE — Since Kevin Tippet took over as North Scott High School’s football coach, the Lancers have had plenty of athletic, dual-threat quarterbacks.

Carter Markham fits that description, but there is a component of his game that is recognizably different than most of the signal callers who have come through North Scott’s program in the past 15 years.

“If you watch him, he runs the ball like a tailback,” Tippet said.

Sliding or stepping out of bounds, to avoid getting popped, is not in his DNA. Markham would rather turn into a defender and lower his shoulder.

Tippet remembers a situation in the season opener against Muscatine when Markham dropped his shoulder into a defender even when North Scott was up three scores in the second half.

“I told him after that game, ‘There are times you need to go out of bounds because I need you for the whole season,’” Tippet said. “He just looked at me and laughed.

“That’s how he’s built. He wants to compete for every yard and every inch.”

Markham’s fiery competitiveness and bulldog mentality have spurred ninth-ranked North Scott (8-1) into the Iowa Class 3A state championship game Thursday night against second-ranked Harlan (11-0) at the UNI-Dome in Cedar Falls.

When North Scott needs to convert a fourth and 2 late in the game, the 6-foot, 180-pounder’s number is called. More times than not, the senior delivers.

“I just feel better with the ball in my hands,” Markham said.

Markham has accumulated 1,642 yards of offense in seven games this season (235 per contest). He’s rushed for a team-leading 743 yards and 11 touchdowns while completing more than 66% of his throws for 899 yards and seven scores versus only two interceptions.

“When the defense has to worry about him on every single play and where he’s at, it opens things up for Darnell (Butler, tailback) and our receivers to catch the ball,” tight end Parker Ruth said. “He’s a big part of our offense and makes us go.”

Markham’s father, Eric, was a high school quarterback in the Champaign, Ill., area and played at Division III Millikin University in the mid-1990s.

On the football field, Markham was a quarterback coming up through North Scott’s program.

“I’ve always been a natural-born leader,” Markham said. “I feel like the guys follow me and trust me, and that means a lot to me. The best part of it is to help lead those guys.”

Markham competed with seniors Jake Matthaidess and Trent Allard for the starting spot last year. Matthaidess won the job and Markham spent the year primarily as a safety.

“It took a little bit of adjusting (not playing quarterback), but I enjoy hitting people,” Markham said.

During the offseason, Markham told Tippet he wanted to take the reins of the offense. Still involved with a travel baseball organization in the Chicago area, Markham made time in the summer to get in the playbook and learn the intricacies of North Scott’s offense.

“Our offense can be complicated at times, and I told him if you want to be the man, we need some time,” Tippet said. “He really committed this summer. When we couldn’t get together, he’d get some guys together and throw the ball around.

“The biggest difference is his willingness and drive to be the guy this year.”

There have been growing pains along the way, including missing two games during the regular season for what Tippet called a “team decision.” The team also was slowed by a school-wide COVID-19 outbreak that canceled two games.

“It has been a couple rough years,” Markham said, “but I’ve really learned stuff about myself, stuff I can fix and be better at.

“I got my teammates' trust back and have tried to be the best teammate I can be through all of this."

Tippet has seen Markham mature, on and off the field.

“He has grown immensely as a man,” said Tippet, who coached Markham in baseball as a youth and later in AAU basketball. “He’s still emotional, but that’s who he is and that’s what makes him a really good player.

“I don’t want him to change. There are times we’ve talked about harnessing that emotion and not letting the emotions run you but you be in control of the emotions. He’s done a really good job of that.”

Markham has produced throughout the playoffs.

He rushed for a career-high 278 yards and four touchdowns along with passing for 150 yards in the 58-26 playoff victory over Mount Pleasant.

He had 227 yards of offense and the game-winning touchdown pass in the final 10 seconds against Davenport Assumption.

He rushed for 114 yards despite a subpar 8 of 20 passing performance versus West Delaware.

Then in last week’s semifinal victory against Cedar Rapids Xavier, he ran for a score and threw the overtime touchdown pass to Ruth.

“He can throw the ball, run the ball and when he scrambles in the pocket, I feel pretty good about him,” offensive lineman Kade Tippet said. “We’re pretty good up front, so when he takes off, he makes magical plays.”

More than the physical skills, Markham brings another dimension to North Scott’s huddle that doesn't appear in a box score.

“He loves to compete, doesn’t like losing and it is a very contagious vibe,” coach Tippet said.

It has North Scott on the doorstep of its first state football title.

“When I play with confidence and play with intensity, my team feels that, sees that and plays off it and it injects into them,” Markham said. “I’m not your quarterback that just throws the ball and then is off by myself.

"I like to be one of the guys, I love celebrating big hits with them and love watching linemen get after it.”

“I’m not focused on that right now,” Markham said. “I really want that state championship for our school and for this group of coaches and players.”

Our team: Sports editor Matt Coss, columnist Don Doxsie and photographer Meg McLaughlin will be at the UNI-Dome. You can follow them on Twitter @mattcoss78, @dox5 and @MegMcLaughlinDA.

North Scott's Carter Markham (7) is tackled by a Cedar Rapids Xavier defender during the Class 3A state football semifinal at the UNI-Dome last Thursday. Markham has compiled 1,642 yards of offense and 18 touchdowns in seven games for the Lancers.

North Scott's Carter Markham celebrates a touchdown against Cedar Rapids Xavier during the Class 3A state football semifinal at the UNI-Dome last week in Cedar Falls.