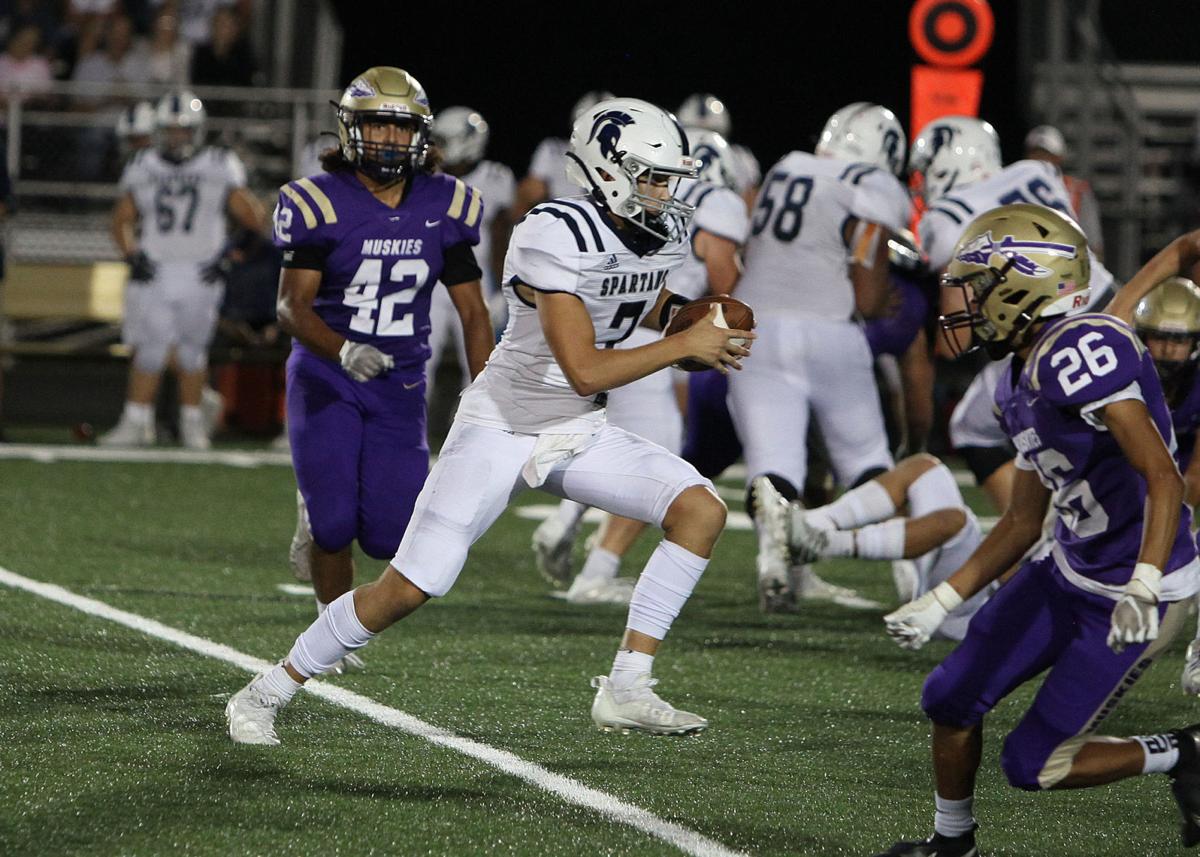 Pleasant Valley's Aiden O’Donnell finds a hole up the middle for a first down during the first half of Friday's game against Muscatine.

"(Last week) was one of my worst games of football. But the coaches kept believing in me," the junior said of his performance in last week's 18-7 loss to Linn-Mar.

But McDermott came off the bench and handled most of the snaps as PV's signal-caller Friday night and went for more than 120 yards rushing and two touchdowns plus a passing score to lead the Spartans to a 42-10 victory over Muscatine.

PV finished with just north of 300 rushing yards as team.

McDermott was key in the first half, but Pleasant Valley found its groove coming out of halftime as a 21-point third quarter not only gave the Spartans a 35-3 lead heading into the fourth, but left them again at the Muskies' doorstep. Kael Amerine scored from a yard out on the first play of the final frame.

"It feels good to bounce back after the last game I had," said McDermott, whose first touchdown capped off a four-play scoring march that was all him. He had carries of 27, 8 and 16 before reaching the end zone from two yards out.

"We were kind of sloppy toward the end of the first half," PV head coach Rusty VanWetzinga said. "We just had to find our way a little bit. But our defense continued to play well. We were inconsistent offensively ... (Caden) had a rough one last week, but he's a good player and we have a lot of confidence in him. He took a big step forward."

Muscatine (0-4) got on the board halfway through the second quarter, when a 25-yard field goal from Sophia Thomas made it 7-3.

Pleasant Valley (2-2) started each of its first two drives in Muscatine territory, something that happened six times throughout the game.

The second score from McDermott, from a yard out, capped the Spartans' opening drive of the third quarter.

Shortly thereafter, junior Makhi Wilson scored from 16 yards out before he connected with McDermott for a 34-yard passing touchdown with 3 1/2 minutes remaining in the third to give Pleasant Valley a 35-3 lead.

Muscatine's last score came on a 19-yard pass from quarterback Landon Battey to Brayden Lane with just over five minutes left. Battey finished 10 of 16 for 78 yards.

"Our guys battled," Muscatine head coach DJ Hawkins said. "We shot the bullets we had but ran out."

Asked what Tolono Unity’s berth in the state championship game would mean to Jordan Reinhart, LeRoy coach B.J. Zeleznik replied, “Oh man, he would have been ecstatic.”

Lena-Winslow's trick is no treat for Fulton 57-38

Lena-Winslow took control early and methodically pulled away to beat Fulton 57-38 on November 24 in Illinois football.

Transfer Charlie Simpson has come in this fall and brought a new element to the Easton Valley football team's dynamic offense.

Easton Valley has compiled a 30-5 record and three trips to the Elite 8 in the past three seasons under coach Tony Johnson.

Pleasant Valley's Aiden O’Donnell finds a hole up the middle for a first down during the first half of Friday's game against Muscatine.