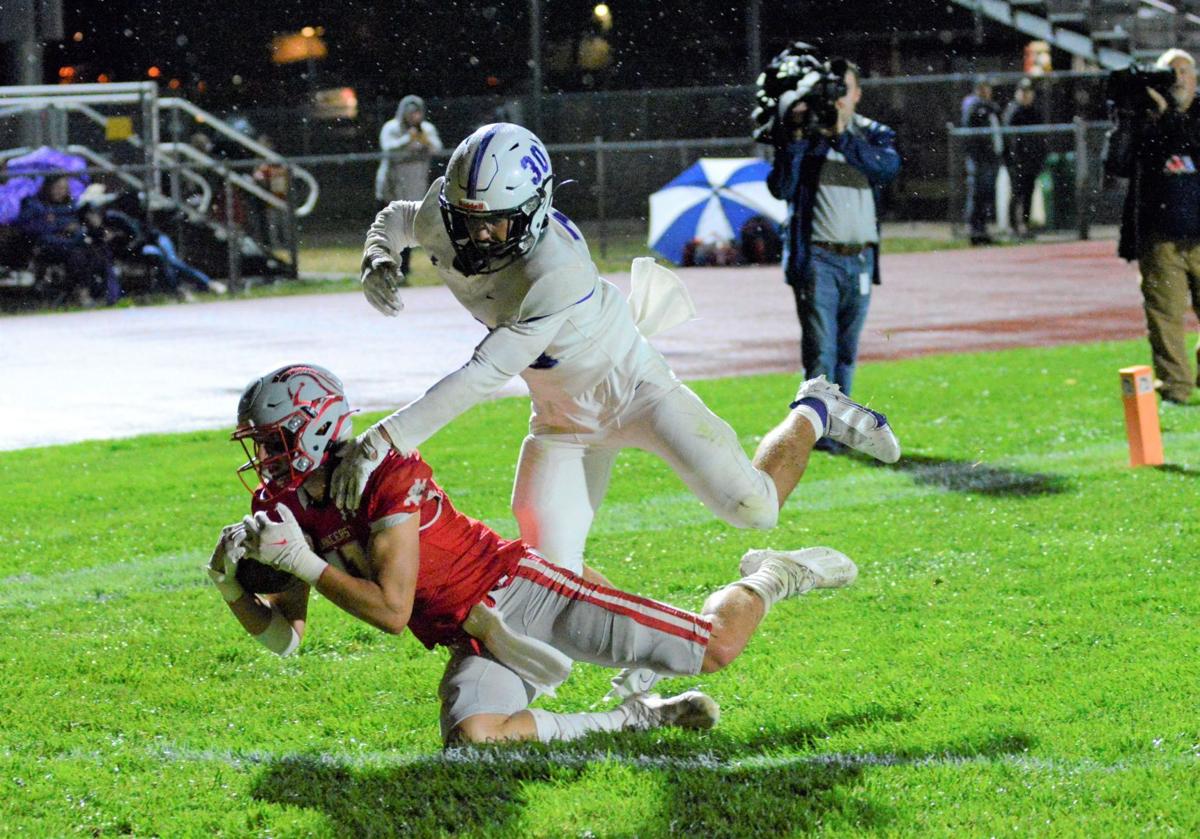 North Scott's Jakob Nelson cradles the football in the end zone on an 18-yard touchdown reception from Grayson Juel on Friday night in Eldridge. 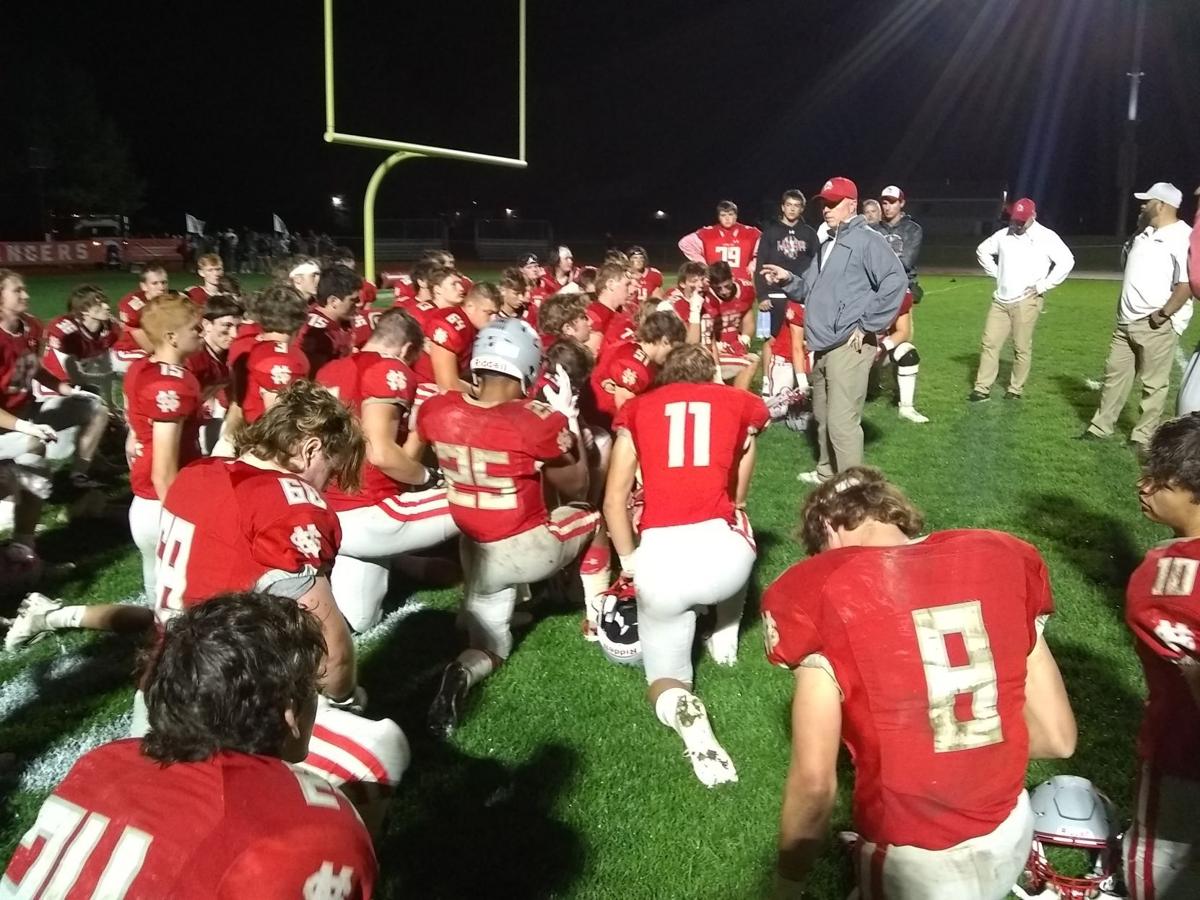 North Scott coach Kevin Tippet talks to his team after the Lancers' 21-0 victory over Iowa City Liberty on Friday. 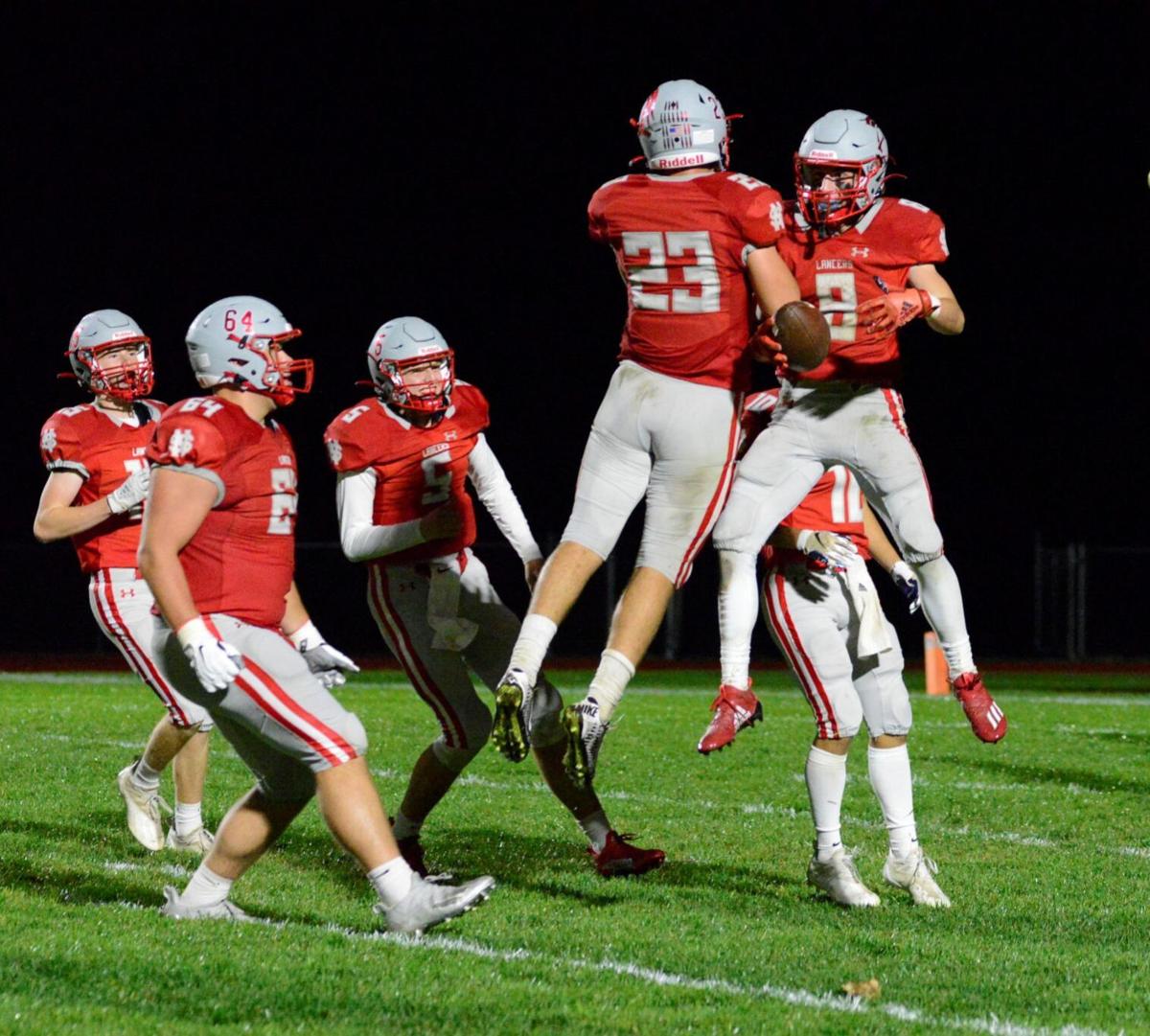 North Scott's Ryan Campbell (23) celebrates with Oliver Hughes (8) after Hughes got behind the Iowa City Liberty defense and scored on a 54-yard touchdown pass from Grayson Juel with 2 minutes, 7 seconds left in the second quarter Friday night in Eldridge.

In the second quarter Friday night, the Lancers validated it.

For the rest of the game they did what they needed to do, which also is what top-ranked teams generally do, grinding out a 21-0 victory over Iowa City Liberty in the Class 4A District 3 opener for both teams at Lancer Stadium.

North Scott exploded for all three of its touchdowns in a span of little more than five minutes in the second quarter, but the Lancers were harshly critical of the way they played in the other three periods.

“We were very inconsistent I thought on both sides of the ball," said senior quarterback Grayson Juel, who threw three touchdown passes to push his 4A-leading season total to 18. “We made plays when we had to and that gave us a little bit of a cushion, but we can still do a lot better."

"We’ve got a lot of things we need to clean up on the defensive end," Hughes said. "We got the shutout but we gave up too many large chunk plays. You’re always going to have games like this in a season. We know that’s not who we are. It’s hard to win a football game and we got it done."

The Lancers (5-0) didn’t score on their first two possessions, missing a long field goal and getting stopped on downs at the Liberty 18-yard line, but the floodgates opened in the second quarter.

A six-play, 64-yard drive resulted in an 8-yard TD pass from Juel to Jakob Nelson. The next march, which covered 78 yards in four plays, began with a 51-yard run by Darnell Butler and ended with an 18-yard scoring toss to Nelson. Juel then hit Hughes with a 54-yard touchdown pass on the third play of the next series to make it 21-0.

"We realized we had to do something," Hughes said of the second-quarter outburst. "We just executed. First quarter we didn’t execute like we should have."

That’s where the score stayed the rest of the night.

Liberty (0-5) put together an 18-play drive that spanned 8 ½ minutes in the last two quarters but when the Lightning reached the North Scott 11-yard line the Lancers forced four straight incomplete passes.

North Scott coach Kevin Tippet, whose team claimed its 14th straight win at home, gave some of the credit for the score to the visitors from Iowa City.

"That’s a good football team," he said. "Their record is a little misleading. I think the teams that they’ve played are going to be 22-3 after tonight … They’ve played a really tough schedule and they’ve got some good players.

"The other side of that is I thought we were a little inconsistent," he added. "Getting out of drives defensively, something we’re usually pretty good at, we didn’t do. And offensively we were unable to drive the ball. We big-played them. We had some matchups and stuff. The one thing I’m a little bit disappointed in is we’ve got to be more consistent if we want to make a run at a district title."

The Lancers managed to hold Liberty running back Darius Willis-Newell to just 78 yards on 21 carries. Willis-Newell had 306 yards last week in a 1-point loss to Clear Creek Amana but after getting 41 yards on the first four plays of the game Friday, the Lancers handled him.

"He ran it down our throats on that first drive, then we were able to contain him a little bit," Hughes said.

North Scott, the top-ranked football team in Iowa Class 4A, did all its scoring in the secon…

North Scott's Jakob Nelson cradles the football in the end zone on an 18-yard touchdown reception from Grayson Juel on Friday night in Eldridge.

North Scott coach Kevin Tippet talks to his team after the Lancers' 21-0 victory over Iowa City Liberty on Friday.

North Scott's Ryan Campbell (23) celebrates with Oliver Hughes (8) after Hughes got behind the Iowa City Liberty defense and scored on a 54-yard touchdown pass from Grayson Juel with 2 minutes, 7 seconds left in the second quarter Friday night in Eldridge.