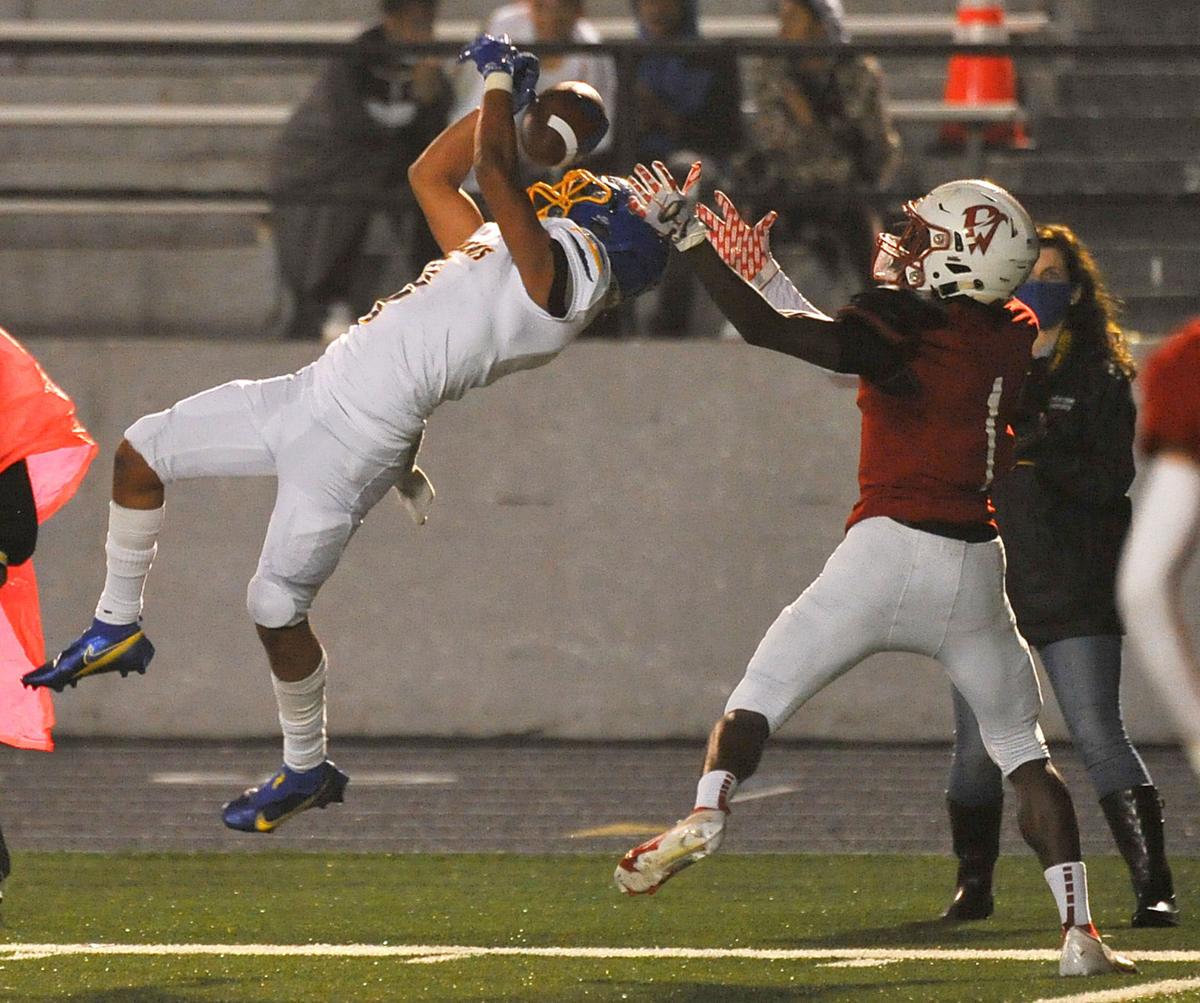 Davenport North's Yovani Morales goes after a long reception near the end zone as the play is broken up by Davenport West's Richard Bailey during the first half at Brady Street Stadium on Friday. 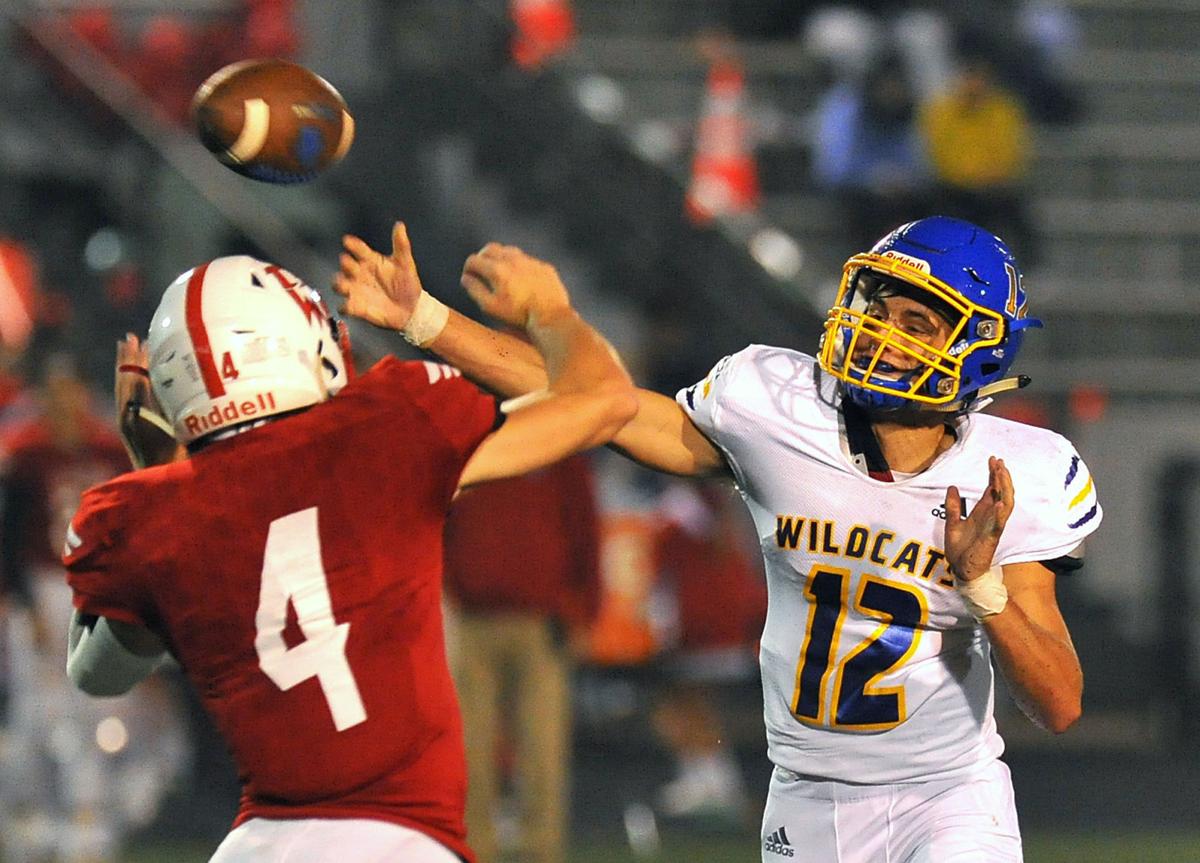 Davenport North didn’t really get its offense going until the second half Friday night.

But when you play the sort of defense the Wildcats are playing right now, you don’t really need a lot of yardage and points.

North limited city rival Davenport West to minus-16 yards rushing and held the Falcons without a first down for more than two quarters on its way to a 21-0 victory on a damp, chilly evening at Brady Street Stadium.

Led by juniors Dominic Wiseman and Amir Lomas, the Wildcats stopped the Falcons behind the line of scrimmage on nearly half of their 36 rushing attempts and benefited from a couple of West special teams miscues on the way to extending their record to 2-0.

"They’re really good," North coach Adam Hite said of his defensive unit. "That was my message when we came out. I said ‘You guys can be the best defense in the state.’ I really firmly believe that. They’re the pulse of our team right now. Those guys just go out there and play with their hair on fire and do an amazing job."

Wiseman, a junior defensive tackle who had at least four tackles for loss in the contest, said the biggest thing the Wildcats have going for them on defense is chemistry.

"We all just love to hit," he said. "We’re all working together. We’re never trying to do too much. We’re all just making sure we’re each doing our job, and that’s really when you start succeeding when you’re OK with the man next to you succeeding and getting the glamour."

West had 29 yards and two first downs on its opening series of the night, but then it went through the entire second and third quarters without getting a first down. It had 14 net yards for the game before sophomore quarterback Brady Hansen connected with Dalton Thompson on a 51-yard pass play in the middle of the fourth quarter.

Despite that, the Wildcats led by only a 7-0 score early in the third quarter and they didn’t get to that number the way teams generally do.

They grabbed a 2-0 lead in the opening minute of the second quarter when an errant snap squirted between the legs of the West punter, who ended up being tackled in the end zone for a safety.

The Wildcats got the ball at the West 35 after the ensuing free kick and moved as far as the 7-yard line with the help of a 17-yard pass from Nolan Mosier to Yovani Morales. But a holding call stalled the drive and the Wildcats settled for a 34-yard field goal by Isaac Griffiths.

The second half began with yet another bad punt snap and another safety.

The North offense finally began clicking after that.

A 6-play, 44-yard drive ended with a Cade Sheedy 1-yard plunge for the first touchdown of the game. The Wildcats’ next series produced a 7-play, 45-yard march that ended with a 5-yard scoring pass from Zane Beebe to Quincy Wiseman that made it 21-0 with 5 minutes, 34 seconds remaining in the third quarter.

The North players rejected the notion that the moist conditions had anything to do with their struggles.

"I think we just started off slow," said Morales, who finished with five receptions for 68 yards. "Coach came in at halftime and told us we needed to keep our foot on the gas and keep going."

Hite said he thought his offensive unit might have been a bit overconfident after last week’s season-opening 40-7 rout of Burlington.

"Our guys were really loose in the locker room but once we got out here the guys were a little tight," he said. "It took us a while to calm down and settle in."

West coach Brandon Krusey, who served as North’s head coach until 2018, wasn’t all that disappointed in how the Falcons (0-3) played despite the fact that they now have scored only seven points in the first three games.

"Overall, I think our kids played a ton better than they have," he said. "They raised their game a lot. I know we got shut out but we competed all night long."

He said it felt a little odd to be going against players he coached just two years ago but said all the strangeness faded away at the opening kickoff and it felt like any other game.

The Wildcats said it felt strange, too.

"It was bittersweet," Wiseman said with a smile. "You don’t really want to talk trash but sometimes you got to."

No. 5 Spartans run past Bulldogs, snap losing streak against rival

Muscatine pulls away from North in fourth quarter

Davenport North piled up over 300 yards of offense.

Davenport North's Yovani Morales goes after a long reception near the end zone as the play is broken up by Davenport West's Richard Bailey during the first half at Brady Street Stadium on Friday.