Moderna asking US, European regulators for emergency use of COVID-19 vaccine 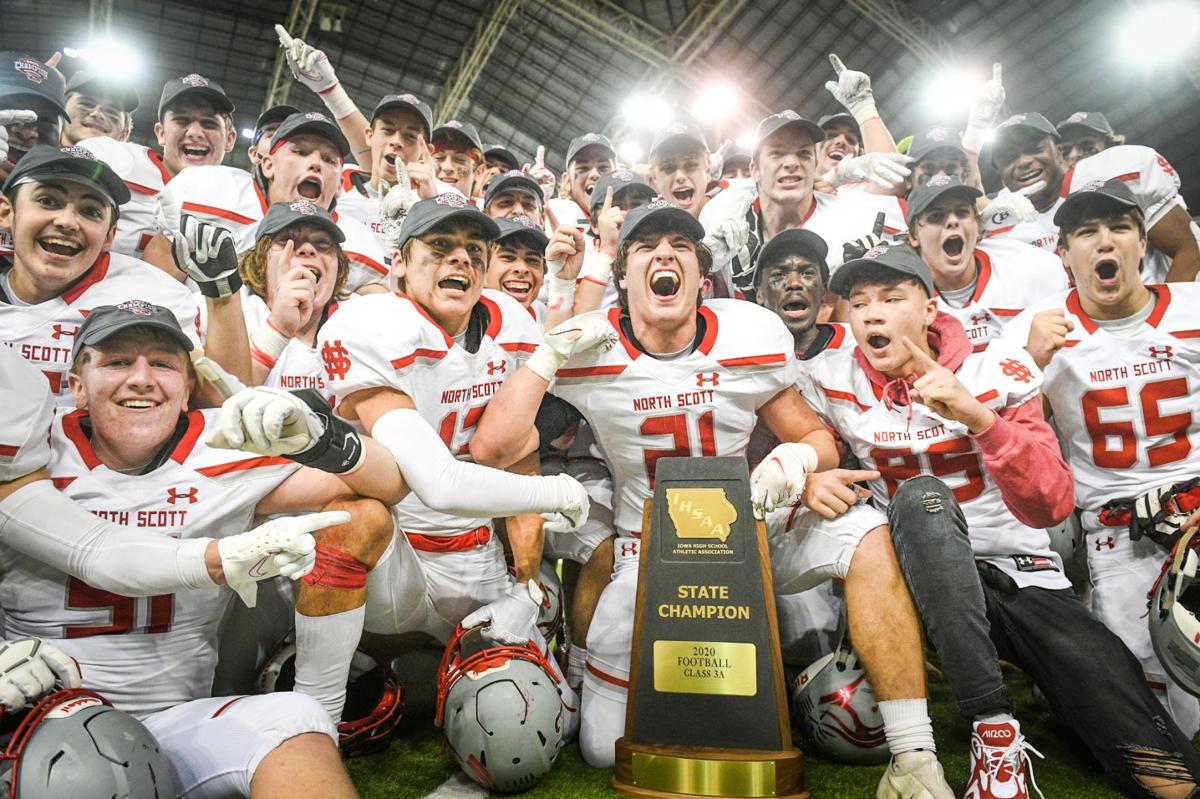 North Scott's Grant Moeller (21), center, and teammates celebrate after the Lancers beat Harlan to win the Class 3A state championship Thursday at the UNI-Dome in Cedar Falls. 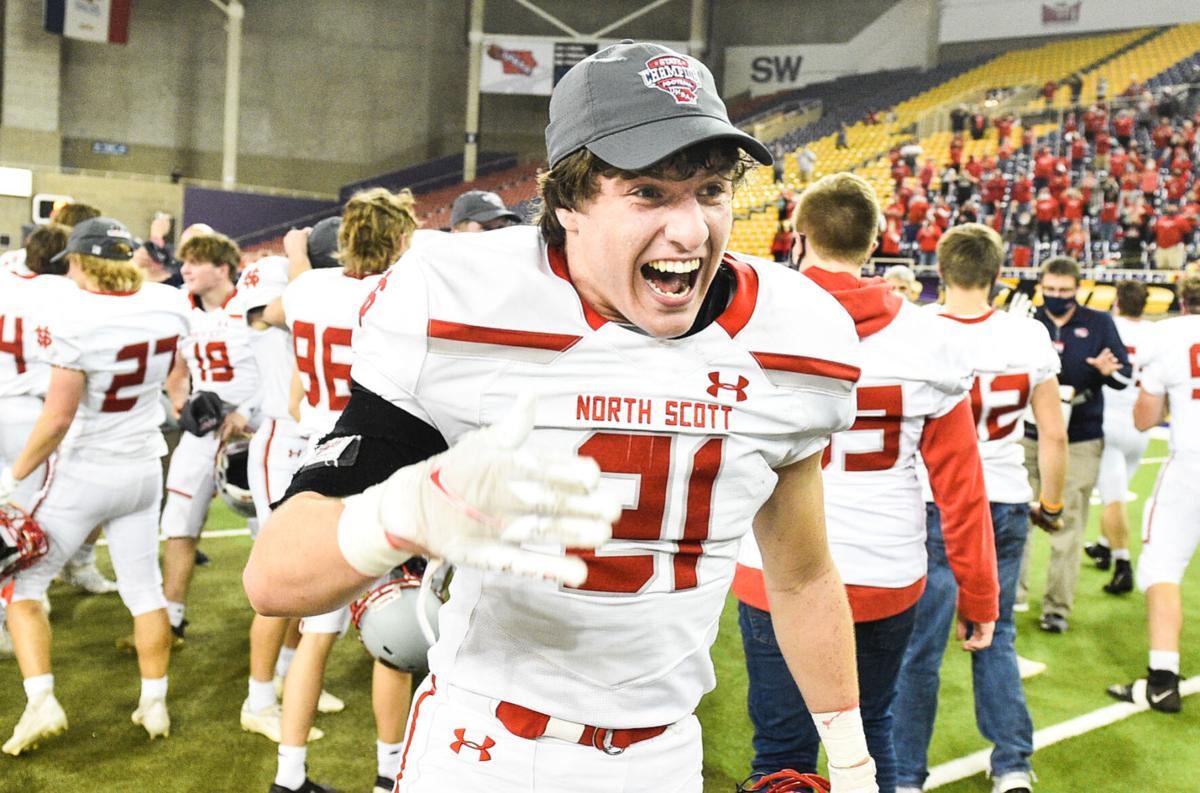 North Scott's Grant Moeller (21) celebrates after the Lancers beat Harlan to win the Class 3A state championship game Thursday at the UNI-Dome in Cedar Falls. 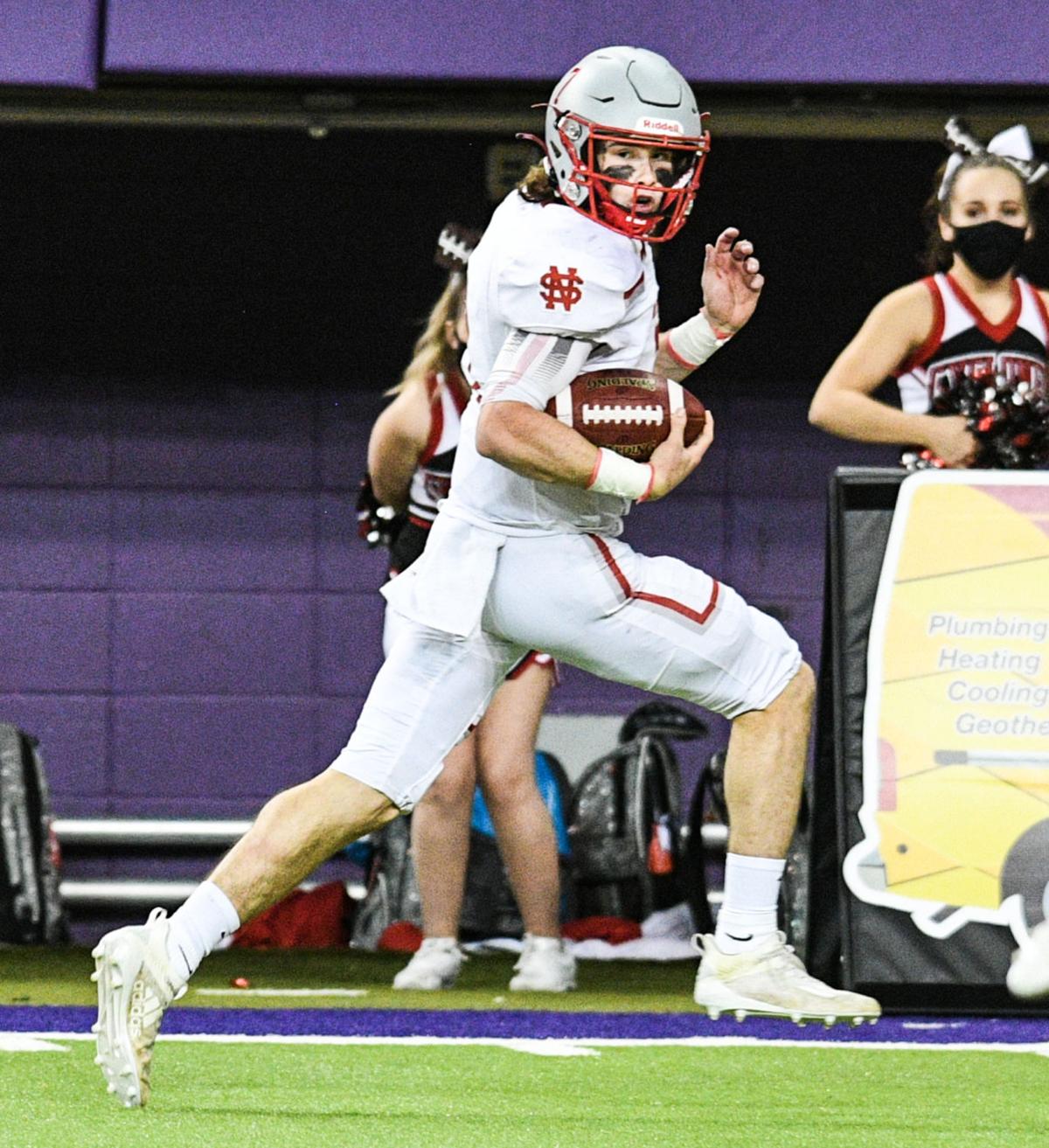 North Scott's Carter Markham runs the ball for an eventual touchdown against Harlan during the Class 3A state championship game at the UNI-Dome Thursday in Cedar Falls. 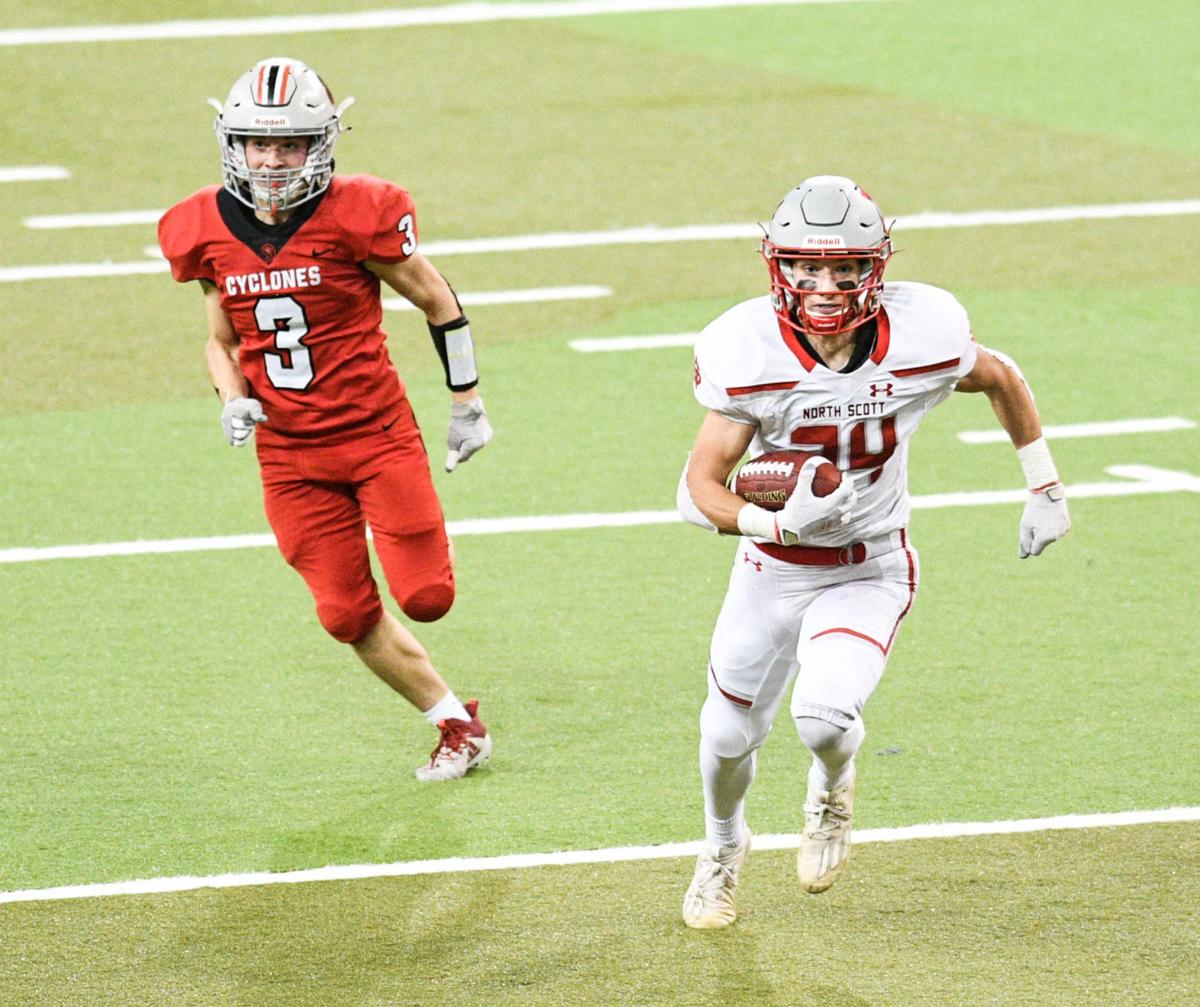 North Scott's Connor Corson tries to outrun Harlan's Joey Moser after he intercepted a pass during the Class 3A state championship game Thursday at the UNI-Dome in Cedar Falls. It was one of Corson's four interceptions on the night.

CEDAR FALLS, Iowa — No last-second touchdown catch was needed. No defensive stand was required in the final minute.

As the closing seconds ticked off the clock Thursday night, North Scott High School's football program could savor the moment.

That's because the Lancers left no doubt.

Thanks to seven interceptions, North Scott can call itself state champions for the first time in program history with a dominating 30-6 victory over second-ranked Harlan in the Iowa Class 3A state title game at the UNI-Dome.

"This is the perfect ending to the story," quarterback Carter Markham said. "With everything we went through this year, we got it done.

"These guys played their hearts out. They're my brothers forever."

Less than 25 years ago, North Scott lost about every football game it played.

But from coach Randy Schrader to Dave Jacobson and now to Kevin Tippet and his staff the past 14 years, the Lancers have gone from laughing stock to the very top.

"I knew this means a lot for the alums," Markham said. "I had some of them text me and wish us good luck. All those guys had the same dream as us. They set the standard and we were able to execute it this year.

"Those guys and past teams are just as big a part of this as us."

North Scott fell in the state quarterfinals each of the past three years. In its maiden trip to the UNI-Dome, it conquered the challenge.

"You don't just wake up and win a state title," Tippet said. "From losing 27 to 29 straight to coach Schrader turning it around and then coach Jacobson and our staff now, it has been a steady upward climb.

"We wouldn't have done what we did this year if our foundation wouldn’t have been set with all kids who have played for us."

North Scott was the Cardiac Kids the past three weeks, pulling out nail-biters over fifth-ranked Davenport Assumption, eighth-ranked West Delaware and top-ranked Cedar Rapids Xavier in the final minute or in overtime.

There was no suspense in the final minutes of this one.

Oliver Hughes and Connor Corson sucked the drama out of this one.

Deadlocked at 6 at halftime, Hughes accounted for 17 straight points to bust the game open.

The junior safety stepped in front of a Teagon Kasperbauer pass and sprinted 61 yards for a touchdown to give North Scott (9-1) the lead.

"I knew (the pass) was coming," Hughes said. "I jumped it as fast as I could and got in front of him."

After Harlan (11-1) went three and out on its next possession, North Scott's offense capitalized with a 45-yard drive.

Markham found Hughes in the flat and he wrestled his way into the end zone for a 4-yard reception.

"I did my job," Hughes said. "I did it for my teammates, all the seniors out there in their last game. We had to end on a high note, so I had to do whatever it took to get in the end zone on those plays."

"After we got up 23-6, we told our guys good teams finish," Tippet said. "We talked about finishing and doing it the right way."

The Lancers were ballhawk. The seven picks was a 3A championship game record, matching the most for any class with 1A Radcliffe's 1972 team.

Corson set a 3A championship game record with four interceptions. He wasn't even a starter in the Lancers' secondary to start the season and had only one interception on the year prior to Thursday.

He had three of those picks in about a four-minute stretch to seal it.

Markham had a 45-yard touchdown run in the opening quarter.

"Darnell (Butler, tailback) ran a great fake and it opened everything up for me," Markham said. "I had to beat one guy.

"I felt fast when I was running."

North Scott had opportunities for more points in the opening half, but turned it over on downs inside Harlan's 15-yard line and missed a 47-yard field goal.

Harlan, meanwhile, scored on a 58-yard pass from Kasperbauer to Aidan Hall on the final play of the half to even the game.

Markham connected with Hughes and Jakob Nelson for scores in the closing two quarters. The 38-yard strike to Nelson gave the Lancers a 30-6 cushion with 10:17 remaining.

In his final football game as a Lancer, Markham completed 12 of 15 throws for 155 yards and ran the ball 19 times for 96 yards.

Once the clock hit zero, the celebration was on. The Lancers had their crowning achievement.

"Coaching your son is really tough," Tippet said. "To have a moment like that with him winning a state title, you can't put it into words. It is pretty special."

It turned into reality for North Scott on Thursday night.

Joey Petersen fueled North Scott High School's football program to a place it had never been before — the UNI-Dome. Caden Kipper helped Pleasa…

CEDAR FALLS, Iowa — Too big, too fast and simply too good.

North Scott's Grant Moeller (21), center, and teammates celebrate after the Lancers beat Harlan to win the Class 3A state championship Thursday at the UNI-Dome in Cedar Falls.

North Scott's Grant Moeller (21) celebrates after the Lancers beat Harlan to win the Class 3A state championship game Thursday at the UNI-Dome in Cedar Falls.

North Scott's Carter Markham runs the ball for an eventual touchdown against Harlan during the Class 3A state championship game at the UNI-Dome Thursday in Cedar Falls.

North Scott's Connor Corson tries to outrun Harlan's Joey Moser after he intercepted a pass during the Class 3A state championship game Thursday at the UNI-Dome in Cedar Falls. It was one of Corson's four interceptions on the night.