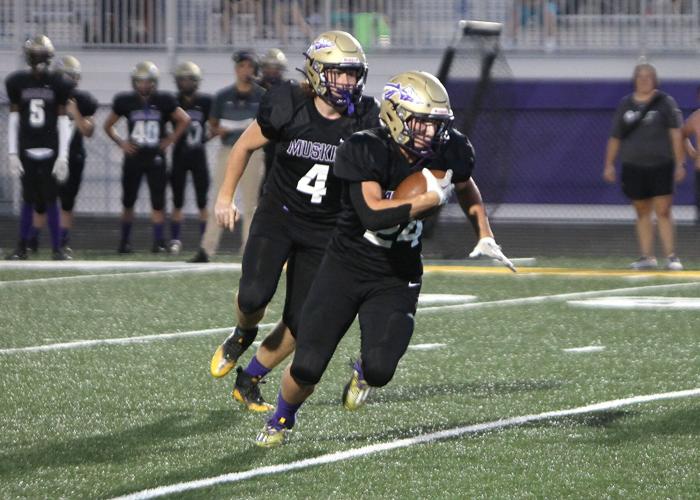 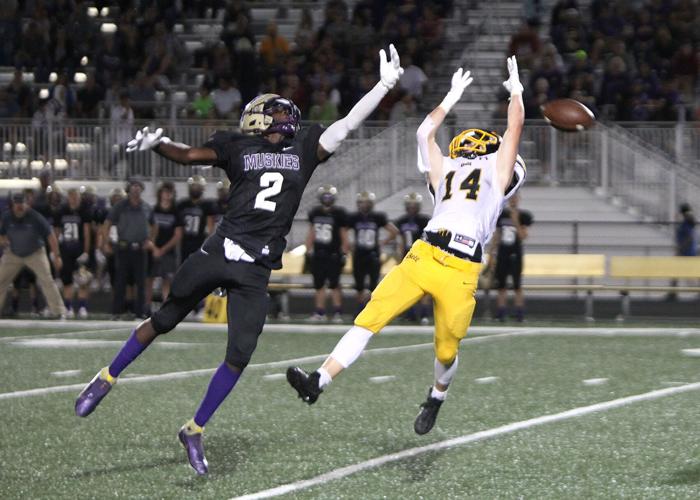 Muscatine High School's Paul Henry (2) tips away the ball and prevents Bettendorf's Wrigley Matthys (14) from making a catch during the first half of last Friday's game in Muscatine. 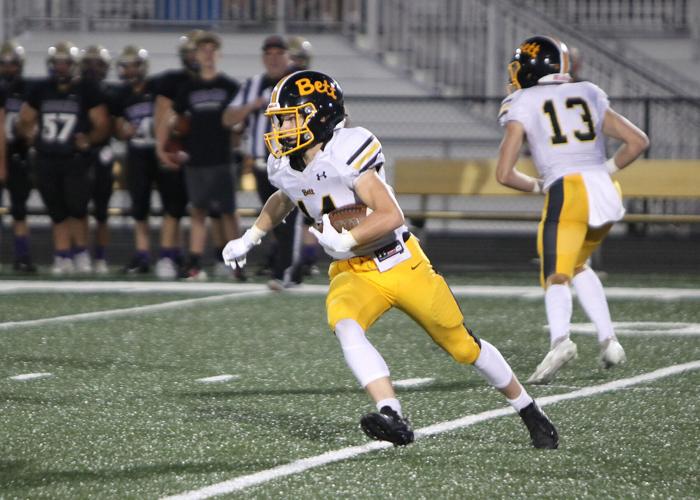 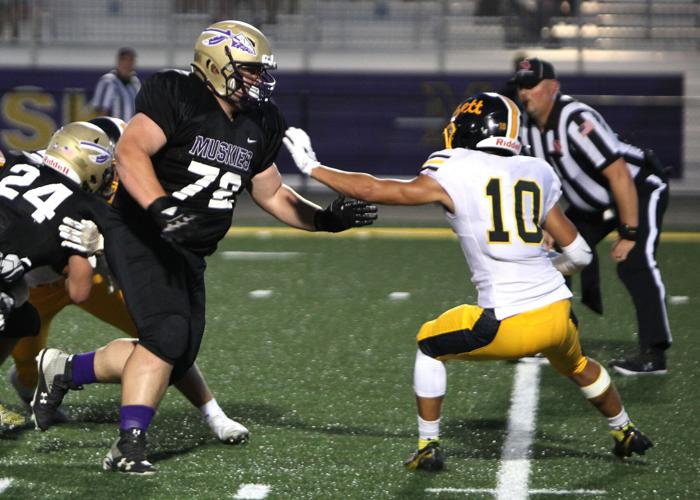 MUSCATINE — It’s been a decade since the Muscatine High School football team defeated the Bettendorf Bulldogs.

With a wild 37-34 victory in which Muscatine junior running back Ty Cozad and Bettendorf’s Isaiah Martinez scored four touchdowns each, Cozad’s Muskies prevailed at home on Friday night.

“I really don’t know what to say,” Cozad said. “I’m just so happy we broke through.”

He ran for over 230 yards on 23 carries in the first half while Bettendorf’s Martinez had two scores and nearly 100 yards on 11 carries.

“He almost had as many yards this game as he did all last year," Muscatine coach D.J. Hawkins said. “I’m just so proud of the guys, the school, the community. There was a great crowd that came out tonight.

“We’ve been preaching that we’re going to do things the right way and eventually it’ll pay off. It paid off tonight. Especially the O-line, they really focused this week. Ty’s an outstanding player, but he doesn’t do what he does without the guys up front.”

Muscatine (1-2) junior lineman Evan Franke made a huge sack as Bettendorf faced a fourth down at midfield with eight and a half minutes to go.

The Bulldogs (0-3) did get possession back, but was forced into another fourth down and 9 from the 50. Quarterback Charlie Zimmerman took off up the middle to force a measurement that ended up going in Muscatine’s favor.

Bettendorf's Wrigley Matthys took one of his two first-half carries 65 yards into the end zone. The first Martinez score put Bettendorf up 14-3 with over five minutes remaining in the first quarter.

“We came out a little slow and gave up those early touchdowns,” Hawkins said. “But somehow, our 34 guys found it in them to battle back.”

The Muscatine pass defense was stout against the Bulldogs in a game marred by 18 penalties. Muskie cornerback Lincoln Brookhart intercepted a Spencer Del Vecchio pass deep inside Bulldog territory to set up Cozad’s second score.

“Every single one of those big defensive plays led to a touchdown,” said Cozad. “We needed every one of them. At this point, we’re confident the offense can put up points, we just need the defense to come through and they did tonight. We have to keep it going.”

And Bettendorf was stymied by penalties all game. The Bulldogs accumulated 80 penalty yards on 10 flags. But more importantly, several wiped away big plays, including an 83-yard would-be touchdown called back on a holding infraction that made it 3rd and 32 from the 17 on the Bulldogs’ first drive after the Brookhart pick and Cozad score that made it 16-14 Muscatine with six and a half minutes left in the first half.

Muscatine junior quarterback Sawyer Zeck added a 5-yard rushing score. Zeck made his second straight start in replacement of senior starting quarterback Landon Battey, who suffered a concussion in the Muskies’ opener, though Battey did come in during the second half.

“To break the losing streak (to Bettendorf) is pretty great,” Battey said. “I just tried to get as many reps during the week hoping I’d be cleared to play.

“We fought hard tonight, I’m proud of everybody.”

Muscatine’s scoring started in its first drive after senior Brayden Lane returned the opening kick to the Bettendorf 35, setting up a 33-yard field goal by junior Jackson Othmer.

“I’m just so proud of our team,” Cozad said. “Nobody quit. Last year (when the Muskies went 1-8), we felt like we sat back and took it.

Pleasant Valley 14, Linn-Mar 7 (OT): While it took the Pleasant Valley High School football team’s offense a while to get in gear, the Spartans' defense not only kept them in Friday evening’s game but won it with a stop in overtime.

PV, ranked No. 3 in the latest Iowa Class 5A AP poll, had the first offensive possession in overtime and connected on a touchdown pass. Austin Bullock’s PAT gave the Spartans the 14-7 lead ahead of Doyle’s game-ending pick.

The game had to be relocated to Cedar Rapids Prairie High School as the installation of new turf on the Linn-Mar High School field is not complete.

PV’s offense found just enough traction in the second half to keep the pressure on the hosting 1-1 Lions, who received votes in the 5A poll, and score once late in the third quarter to tie the game at 7 after trailing 7-0 at halftime. That score came when Makhi Wilson broke loose for a 35-yard scoring run. Bullock’s point-after kick knotted the score with 3:53 left in the contest.

PV had another shot late in regulation after Doyle intercepted another Lions pass near midfield with 45 seconds left. The Spartans, though, couldn’t convert as the game went to overtime.

Rusty VanWetzinga had a second-quarter interception and Max Doran recovered a Lions fumble for the Spartans defense that has allowed just 13 points in three wins so far this season.

Doran’s fumble recovery gave PV the ball at the Lions’ 34-yard line; however, the Spartans missed a field goal with 1:45 left in regulation that could have broken the deadlock.

North (0-3) scored twice in the fourth quarter to avoid the shutout. Ahmad Schopshire first scored on a 2-yard run and Nolan Mosier tacked on a 26-yard scamper after Senior took a knee and gave the ball back with the clock running down. Elliot Stolmeier added on PAT kick.

The hosting Rams (2-1) extended the margin 13-0 when Kyle Konrardy booted a 49-yard field goal with 1:48 left in the second quarter. His first field goal in the contest came from 37 yards out.

Alleman forfeits Friday matchup with Moline because of injuries

Alleman High School football will forfeit its game against Moline on Friday because injuries have led to low numbers on the offensive line. Read more:

In one of the most disheartening losses, the Bettendorf football program has reached a point it has not been at in nearly five decades.

A capsule look at the Quad Cities metro games for Week 5 of the high school football season.

The Pleasant Valley football team's starting defense has surrendered just one touchdown in the first four games of the season.

Old look for Bulldogs as they race past Davenport Central

Rock Island's Quonterrion Brooks ran for 332 yards and scored four touchdowns in Rocky's 68-35 victory over United Township. The Rocks outscored the Panthers 40-7 in the second half.

Muscatine High School's Paul Henry (2) tips away the ball and prevents Bettendorf's Wrigley Matthys (14) from making a catch during the first half of last Friday's game in Muscatine.