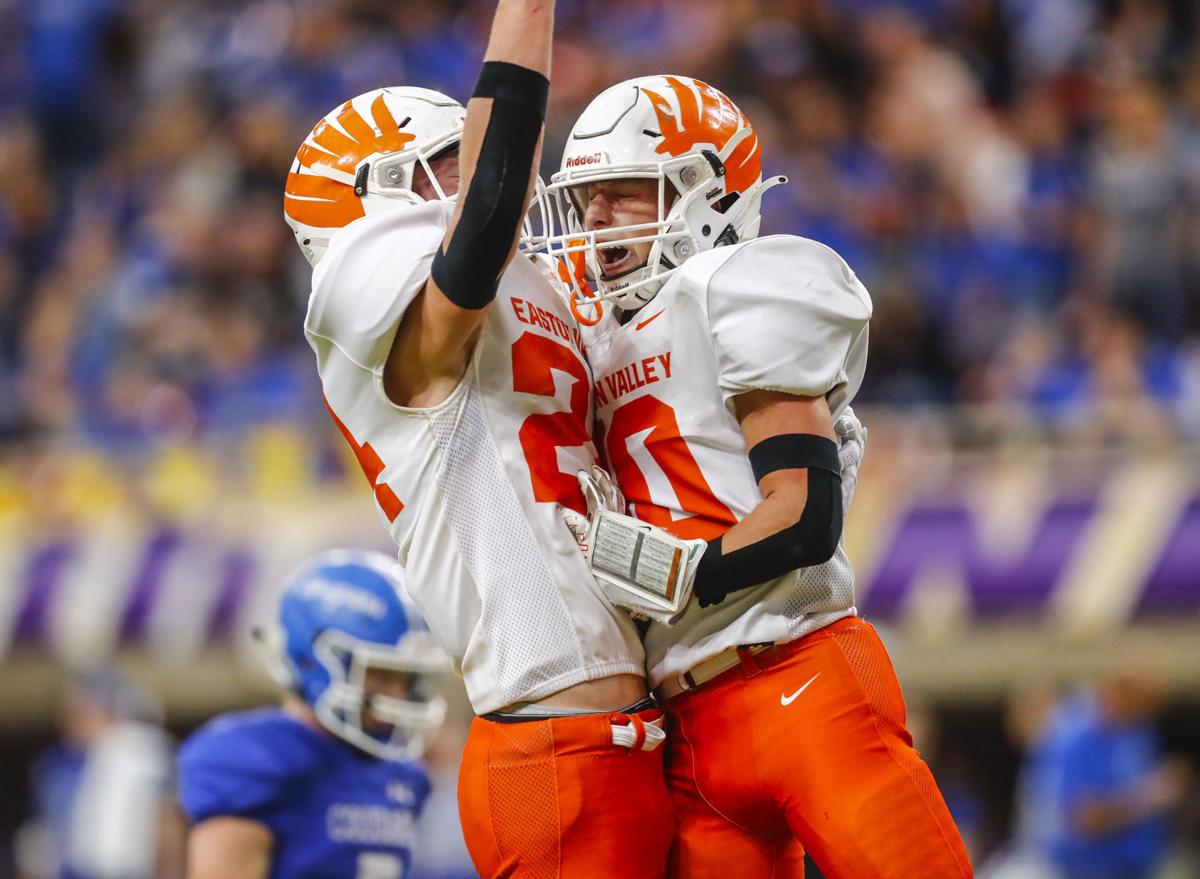 Easton Valley juniors Hayden Felkey and Carson Fuegen celebrate after a touchdown in the eight-player state championship Thursday in Cedar Falls. Felkey and Fuegen are two of five defensive starters returning for the River Hawks in 2022. 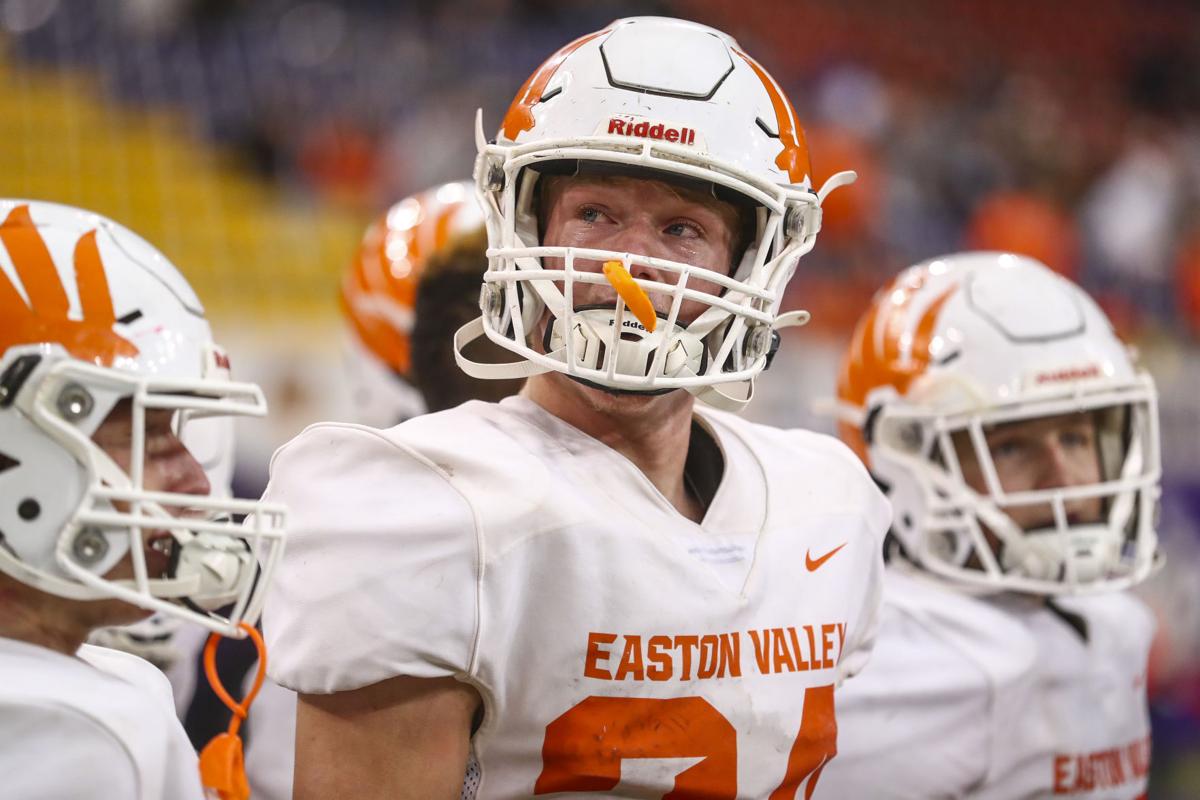 Easton Valley junior Hayden Felkey looks to the scoreboard after the River Hawks' loss against CAM on Thursday during the championship game of the state football championships at the UNI-Dome in Cedar Falls.

CEDAR FALLS, Iowa — Easton Valley High School’s football program was not in a favorable position four years ago. The school had endured four straight losing seasons and was undergoing a coaching change.

Under Tony Johnson’s guidance, the River Hawks have ascended into one of the state’s top eight-player programs.

After back-to-back quarterfinal appearances, Easton Valley came agonizingly close to the school’s first state championship with a 42-40 setback to top-ranked Cumberland-Anita-Massena on Thursday morning in the UNI-Dome.

“Ever since coach Johnson came in, he installed work ethic in the players,” junior two-way starter Carson Fuegen said. “Everybody respects him so much and he gets the most out of his players. He’s a very good coach.”

Johnson had four freshmen in his program in his initial season. That class, now seniors, has nine players on the roster. Eight of them were in uniform and played in some capacity in the championship game.

“Building a program, talking to friends and getting more kids out, what a great group,” Johnson said. “There are a couple kids I wish I would have had longer than just one year, but I can’t say enough about how they’ve built this program.”

It was a senior class with talent and multiple leaders.

Quarterback Conor Gruver closed the year with 3,255 passing yards and 56 touchdown throws. Receiver Aidan Gruver hauled in two touchdown receptions in the title game. Linebacker Andin Farrell compiled more than 120 tackles. Dillon Beck and Carson Lee were the pillars of the offensive line. Dylon Dyson was a key component of the defensive line.

“We’re losing a bunch of good seniors,” Fuegen said. “They controlled everything. They were great leaders and did a really good job of making sure everybody stayed calm.

“They made big plays when big plays had to happen.”

The River Hawks, with a 30-5 mark the past three seasons, don’t plan to take a step back.

Fuegen, who set an eight-player championship game record with 20 receptions for 211 yards, and Felkey each finished the season with more than 1,000 receiving yards. Simpson ran for 1,300 yards.

“This stokes the fire quite a bit,” Felkey said. “Being here now and seeing it, you want to win it all now. This offseason is going to be probably the best offseason we’ve had.”

Quarterback and the offensive line are the two biggest question marks facing the River Hawks between now and next fall.

“We know what it took to get to this point,” Johnson said. “What’s it going to take to get over this? We definitely have the foundation laid and guys coming back that are a big part of what we do. We’re excited about next year.”

Often labeled just a basketball school when it comes to athletics, Easton Valley is building its reputation as a football program one layer at a time.

“Best four years of my life,” Conor Gruver said. “We worked really hard each and every day to get where we are at right now.

“We weren’t that special three years ago, but we just kept getting better and better.”

Ridgewood transitioning to 8-player football in 2022

When the 2022 high school football season kicks off, there will be a new entry among the growing ranks of 8-player football in Illinois.

Easton Valley juniors Hayden Felkey and Carson Fuegen celebrate after a touchdown in the eight-player state championship Thursday in Cedar Falls. Felkey and Fuegen are two of five defensive starters returning for the River Hawks in 2022.

Easton Valley junior Hayden Felkey looks to the scoreboard after the River Hawks' loss against CAM on Thursday during the championship game of the state football championships at the UNI-Dome in Cedar Falls.