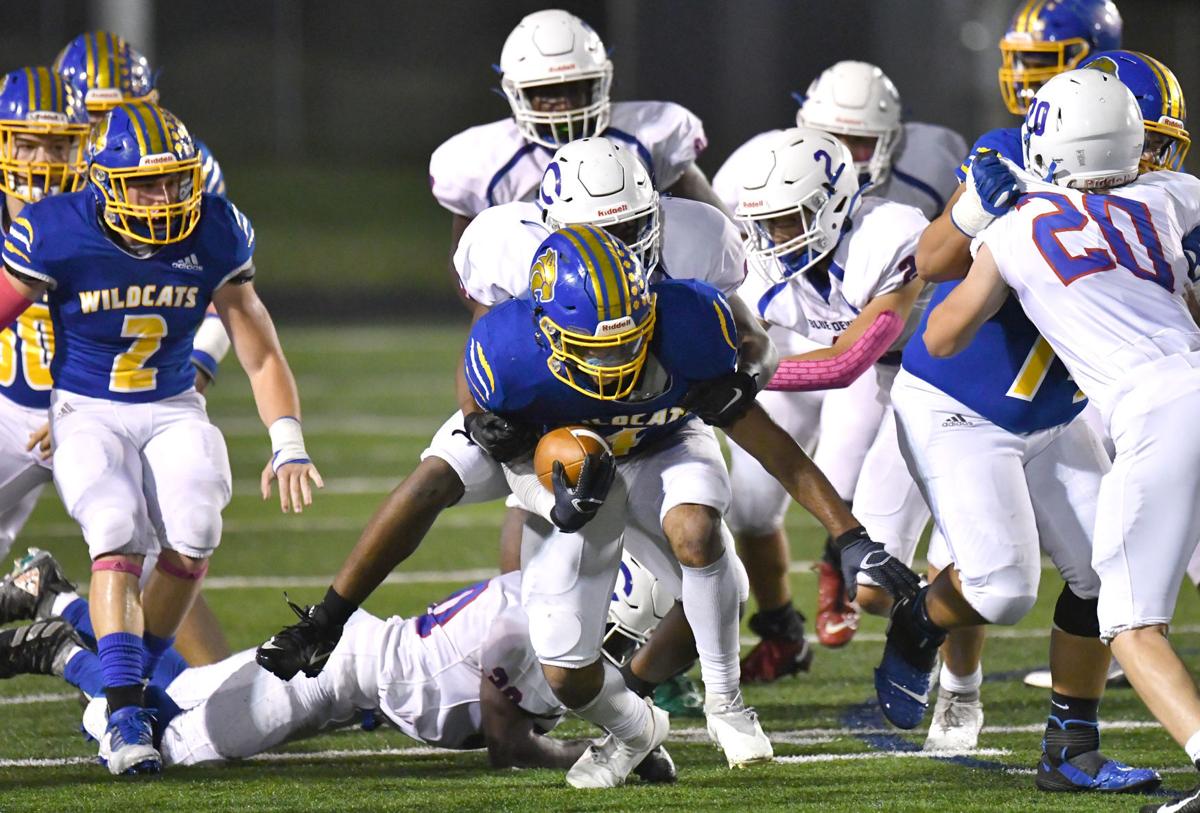 Davenport North's Giovanni Rivera breaks through the line and past Davenport Central defenders during the first half of Friday's city showdown at Brady Street Stadium. Rivera's 288 yards rushing carried the Wildcats to a 34-19 victory. 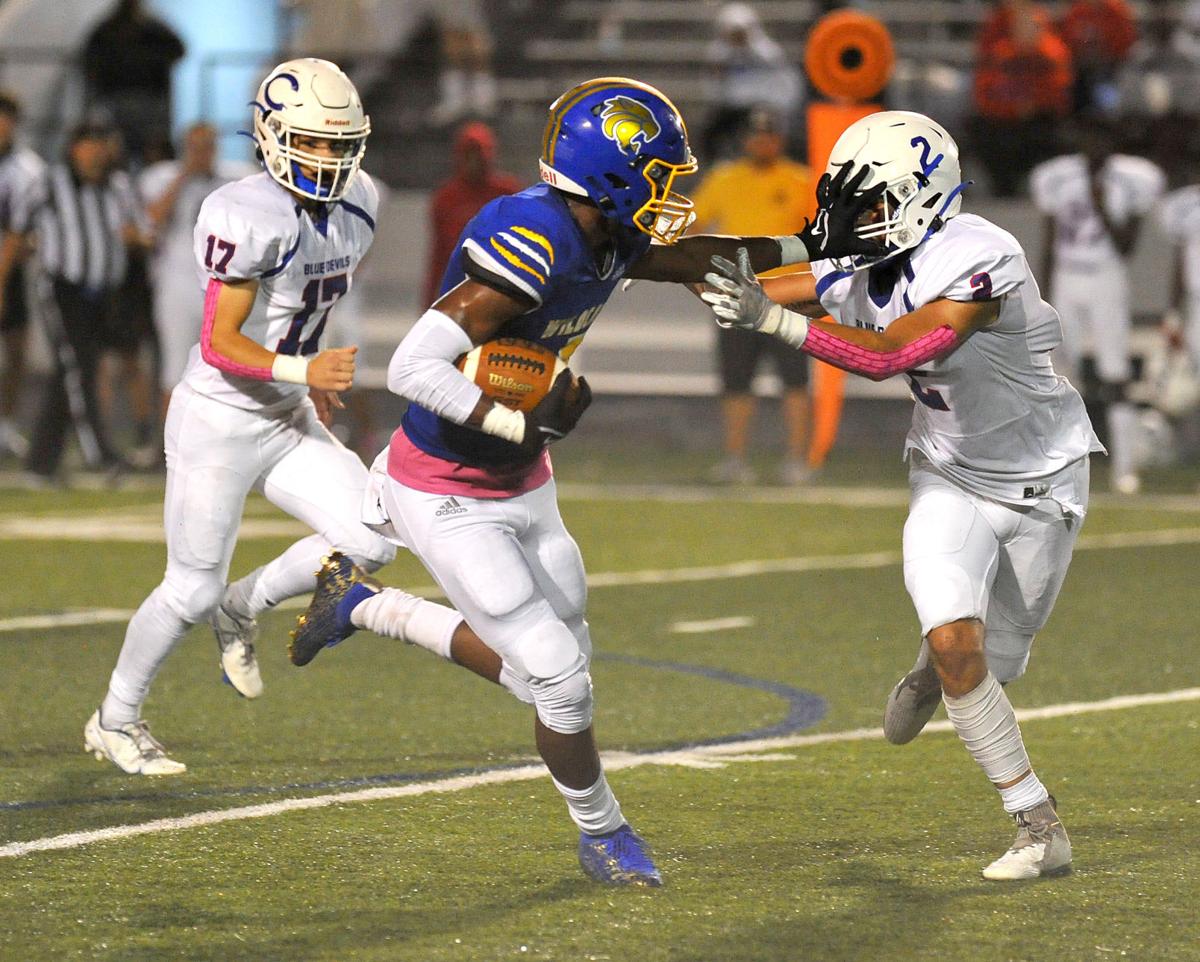 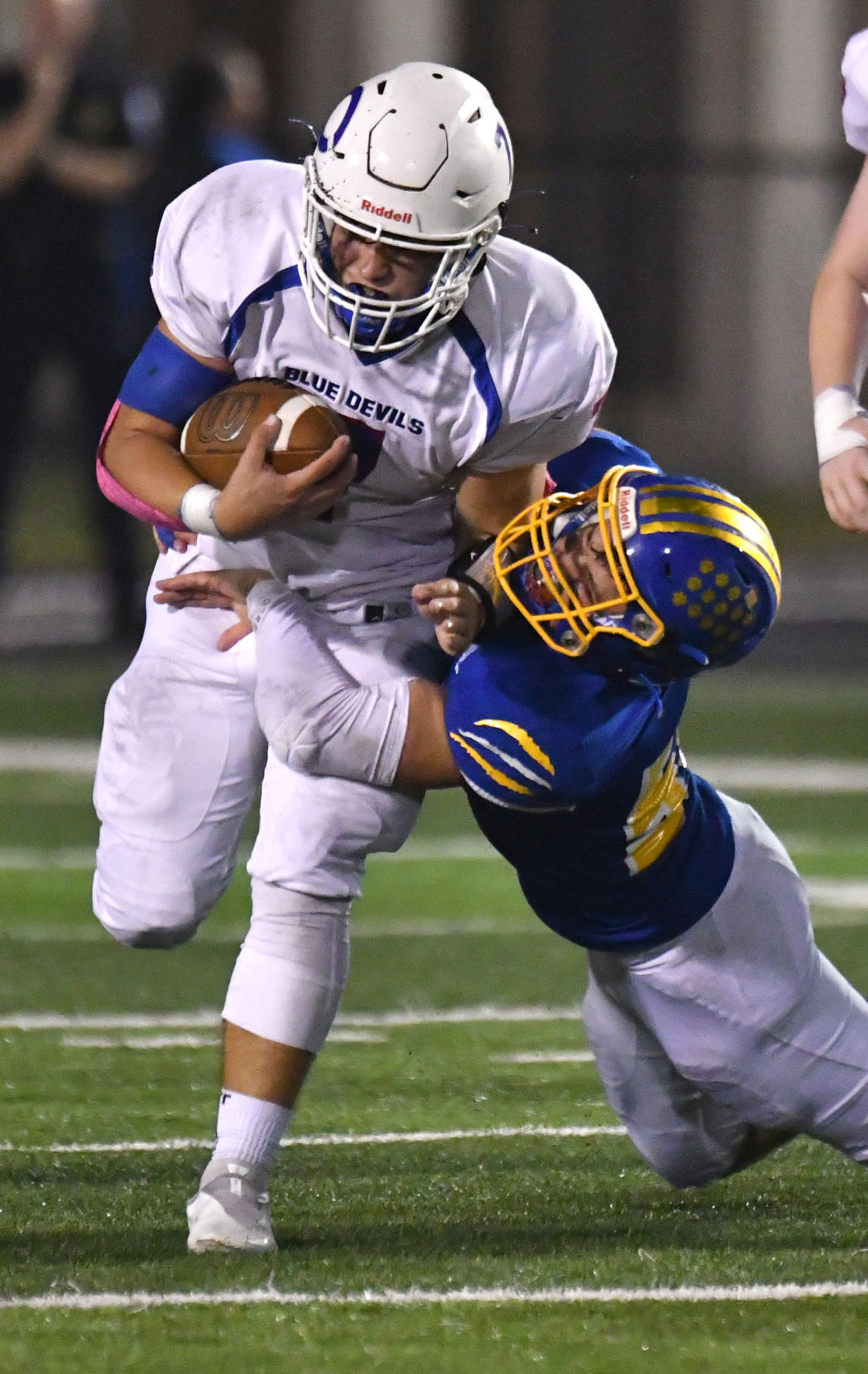 Davenport Central quarterback Nate Hummel is tackled by Davenport North's Dalton Wright during Friday's city showdown at Brady Street Stadium. Hummel threw for two touchdowns and ran for another, but it wasn't enough in a 34-19 loss. 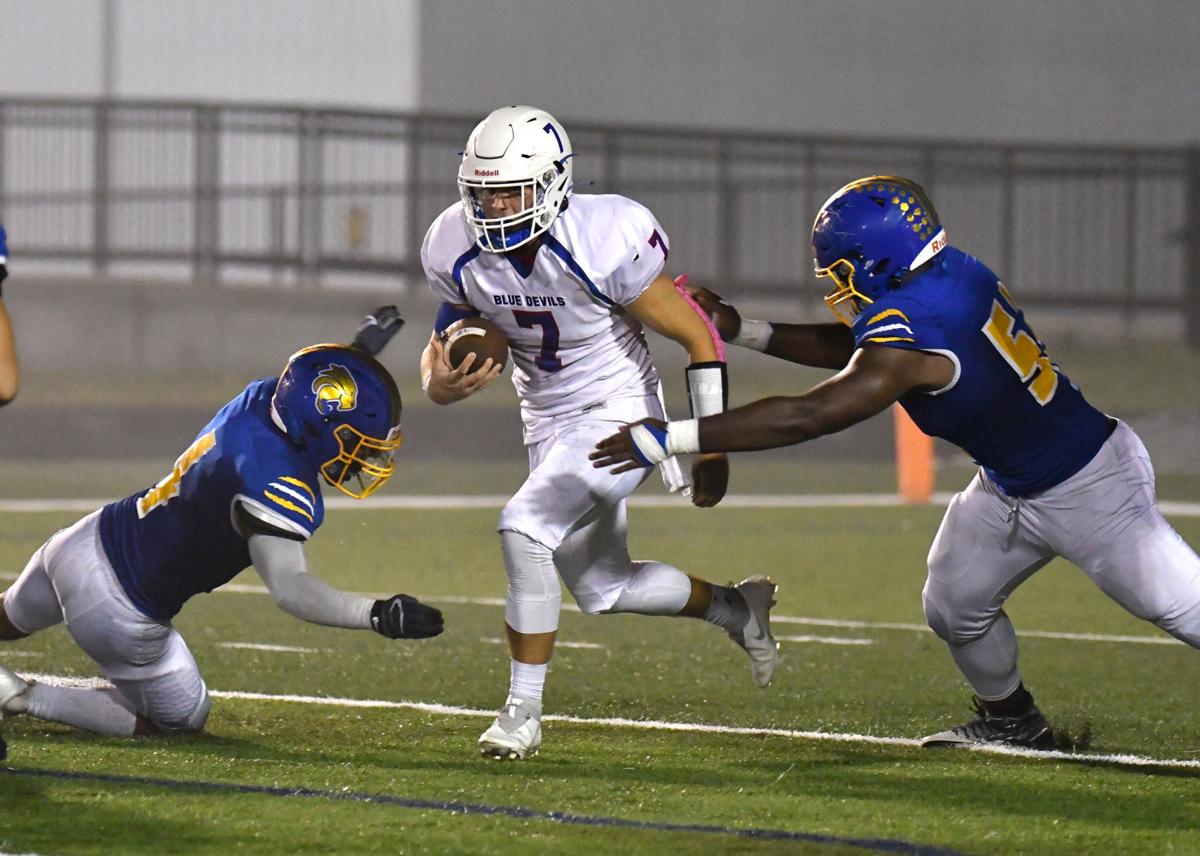 Giovanni Rivera carried the load for the Davenport North High School football team and also carried the Wildcats back into playoff contention.

The senior running back carried the ball 34 times and finished with 288 yards rushing and a pair of touchdowns as the Wildcats took down rival Davenport Central, 34-19, at Brady Street Stadium on Friday night

North (3-4 overall) has winless Muscatine next week and then hosts Bettendorf in the final week of the season, which could potentially be a play-in game to make the post-season for either team.

Perhaps a bonus for Wildcat fans is the defeat leaves Central at 3-4 as well, but the Blue Devils face two monster challenges in the last two weeks in Linn-Mar and Iowa City High.

Friday night also saw the return of the Wildcat offense that had not scored a touchdown in 10 quarters before Nolan Mosier hit Cameron Stokes for a 54-yard touchdown pass on a slant that put North up for good at 7-6 midway through the first quarter.

“We were just kind of waiting for our offense to explode and it did,” North coach Adam Hite said. “After facing two really good defenses, we thought we could have some success. Gio came in and just really had a great night.”

Rivera did something special on three of the five scoring drives for the winners. His 17-yard touchdown run right at the end of the first quarter was straight up strength. After being hit in the middle of the Central defense, Rivera kept his legs churning and fighting.

He broke through practically every Blue Devil defender and dragged two more with him as he reached across the goal line. His touchdown and Peter Phan’s extra point made it 13-6 for the Wildcats.

Rivera credited another sport for the run.

North led 20-12 at halftime after Mosier hit Stokes for a 57-yard TD pass midway through the second quarter but then it was back to the Rivera show to start the third quarter.

He rushed nine of the 13 plays for the Wildcats to open the second half and Mosier finished off things with a 1-yard TD run to put North in control, up 27-12. Rivera had 70 of the 80 yards North had on the drive.

Rivera put the finishing touches on his night and put away the game with just under four minutes left in the contest when he burst through the line and outran Central’s secondary for an 86-yard touchdown run. It left the Wildcats up 34-12.

“It just feels amazing, especially with the ball in my hands,” Rivera said about his performance. “I had the hot hand tonight. This is a big win and keeps the momentum going for us against Muscatine and Bettendorf.”

Nate Hummel threw for two long touchdown passes for the Blue Devils and added a 64-yard touchdown run of his own, but Central was erratic offensively the rest of the contest.

The Blue Devils went 3-for-11 on third down attempts, had 95 yards in penalties and twice turned the ball over on downs in the third and fourth quarters when attempting to get back in the game.

Tonight's Bettendorf High School football game at Iowa City West has been cancelled because of COVID-related issues within the Trojans' program.

Davenport North's Giovanni Rivera breaks through the line and past Davenport Central defenders during the first half of Friday's city showdown at Brady Street Stadium. Rivera's 288 yards rushing carried the Wildcats to a 34-19 victory.

Davenport Central quarterback Nate Hummel is tackled by Davenport North's Dalton Wright during Friday's city showdown at Brady Street Stadium. Hummel threw for two touchdowns and ran for another, but it wasn't enough in a 34-19 loss.