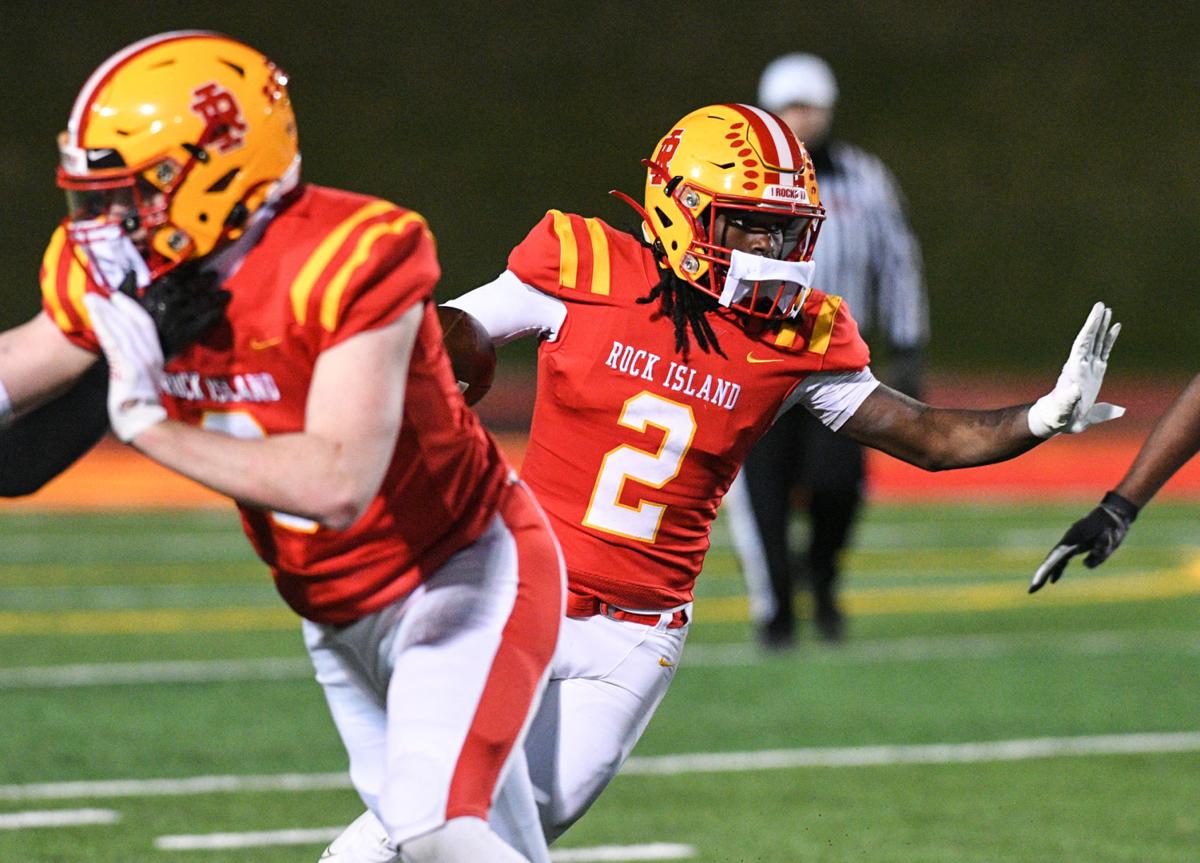 Rock Island's Marriyon Rogers (2) runs the ball against Galesburg during their game at Almquist Field on Friday in Rock Island. 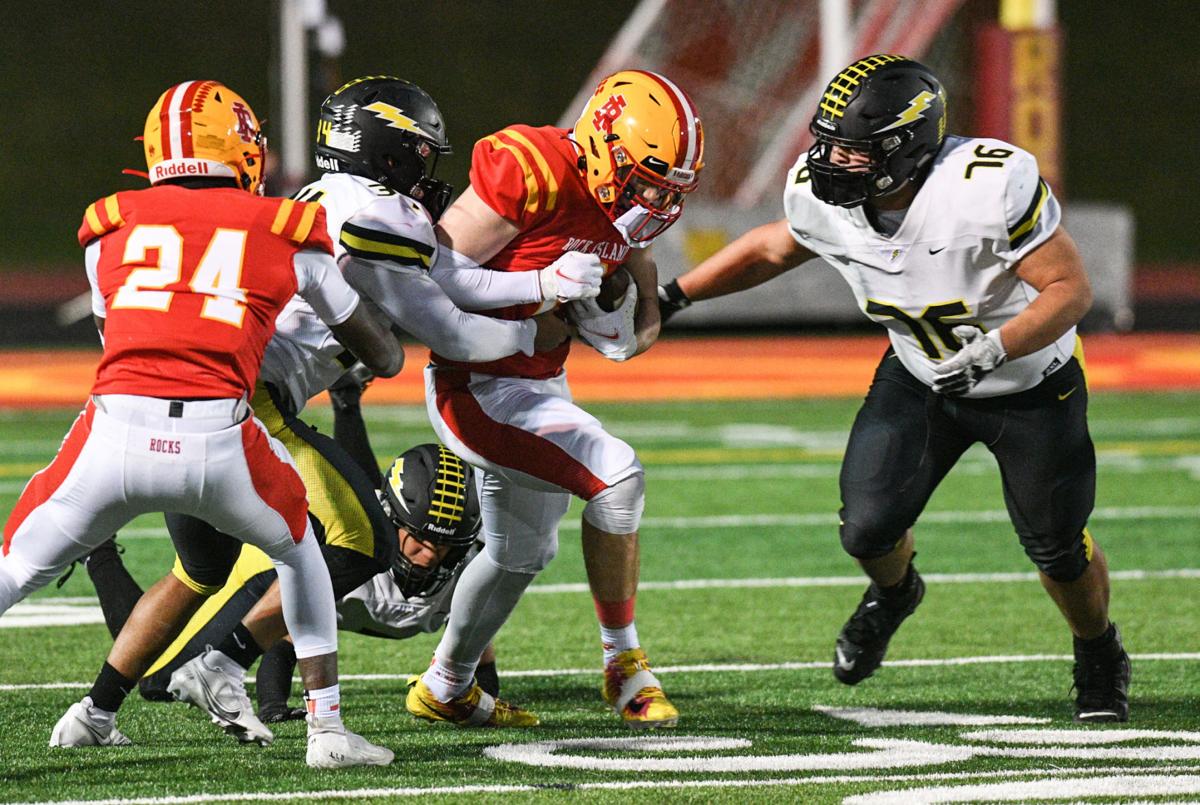 Rock Island's Cole Rusk (6) fights for extra yardage against a trio of Galesburg defenders during their game at Almquist Field Friday in Rock Island.

The Rock Island football team had three punts blocked Friday night. It was flagged for a dozen penalties. It had a 94-yard touchdown wiped out by an inadvertent official's whistle.

But it had another 94-yard touchdown that did count and it did more than enough good things to remain atop the Western Big 6 standings.

Jakobe Bea’s 94-yard touchdown reception on the third play of the fourth quarter broke open a very close game and the Rocks’ defense came to life in the second half to help them grind out a 34-21 victory over Galesburg at Almquist Field.

Rocky coach Ben Hammer admitted it wasn’t the most picturesque victory he could recall.

The Rocks, who visit Sterling next Friday in a showdown between the Big 6’s only remaining unbeaten teams, piled up 418 yards of total offense, but the general consensus was that it was a couple of big turnovers by the defense that turned the game in Rocky’s favor.

"The offense started a little slow but the defense bailed us out," said Bea, who finished with five catches for 151 yards.

"Our defense, with the exception of the first drive, really did a great job in the second half," Hammer added.

Galesburg used a punishing wishbone assault to chew up chunks of yardage on the ground and crank out 23 first downs, and the game was tied at 21-21 in the middle of the third quarter before the Rocks took control.

An 8-play, 57-yard scoring drive that included a 28-yard pass from Eli Reese to tight end Cole Rusk on third-and-6 put Rocky on top for good. Marriyon Rogers charged into the end zone from 3 yards out to make it 28-21 with four minutes remaining in the quarter.

Galesburg (2-1) began moving again with 11 straight running plays, but the Rocks stripped the ball loose from Damian Thomas, with Terrell Akers recovering for the Rocks at the 11 yard line.

Rock Island (3-0) incurred an illegal procedure penalty on its first play after that, but Hammer rolled the dice on the next snap, calling for a play in which all four wide receivers were supposed to run vertical routes straight down the field.

However, Bea read the defense and improvised.

"I ran a post instead and I knew Eli would see me," he said.

After catching the pass over the middle, Bea turned and sprinted past everyone.

"Once I’m in the open, nobody is going to catch me," Bea said.

The defense forced Galesburg to punt on the next possession and Jaylen Brozovich intercepted a pass on the Silver Streaks’ final one to clinch the win.

Reese completed 21 of 29 passes for 332 yards. Rusk also had a big night, catching nine passes for 109 yards and being forced into action as a punter after the Rocks’ first two punts — their first of the season — were blocked.

Rock Island emerged from the first half with a 21-15 lead despite the fact that it had three punts blocked.

The first two blocks set up Galesburg for its only points of the half. The Silver Streaks only needed to drive 25 yards for a first-quarter touchdown and 27 yards for a second-quarter score.

The third blocked punt, which occurred near midfield with less than a minute to go in the half, actually benefited the Rocks. Akers scooped up the bounding ball and raced 39 yards before being tackled at the Galesburg 7-yard line.

Rogers came up short in two attempts to run it in from there, but Reese threw 4 yards to Rusk, who made a leaping grab in the corner of the end zone to give the Rocks the lead.

That sequence came just a few minutes after Rock Island had a touchdown taken off the board due to an inadvertent whistle by the officials. Brozovich scooped up a bouncing punt at his own 6-yard line and raced up the left sideline to score.

However, the officials blew the whistle before the play was completed and gave the Rocks the ball at their own 25-yard line.

Rocky put together substantial drives for its other two first-half touchdowns. Reese completed all three of his pass attempts for 43 yards on an opening march the end with a 14-yard scoring toss to Rusk.

The Rocks went 60 yards in four plays to score later in the opening period. A 21-yard hook-up with Rusk set up a 33-yard scoring play in which Rogers caught a screen pass and maneuvered his way up the field to score.

This week's marquee Western Big 6 Conference football showdown could be one for the ages.

Motivated Smith clearing his path on and off field

Cayne Smith has found plenty of clear running lanes on the football field this spring and when he has, it has meant a number of foes left in h…

GALESBURG — It took overcoming three turnovers and special teams struggles, but the Moline football team held off Galesburg to earn a 27-24 We…

Rock Island's Marriyon Rogers (2) runs the ball against Galesburg during their game at Almquist Field on Friday in Rock Island.

Rock Island's Cole Rusk (6) fights for extra yardage against a trio of Galesburg defenders during their game at Almquist Field Friday in Rock Island.