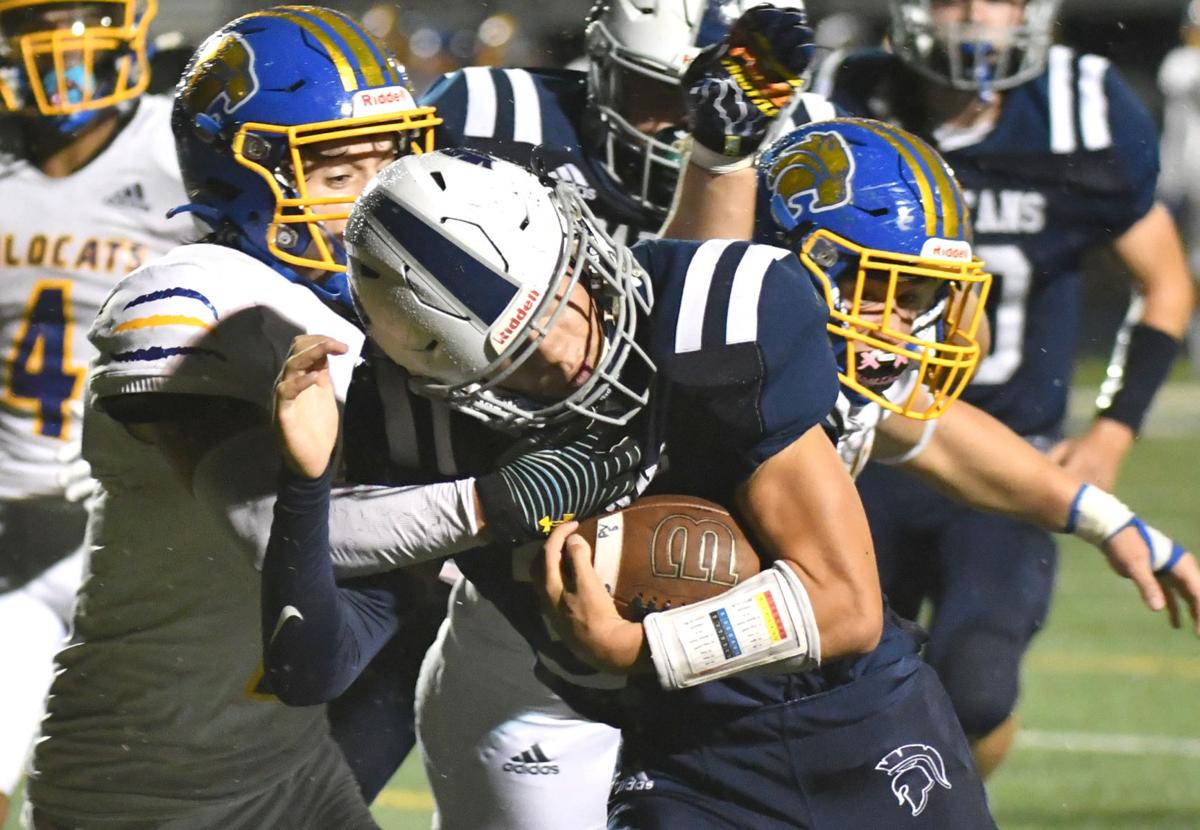 Pleasant Valley's Tyge Lyon is hit by Davenport North's Dalton Motley during the first half of Friday's game at Spartan Stadium. Lyon had 110 rushing yards and two touchdowns in the Spartans' 44-0 win. 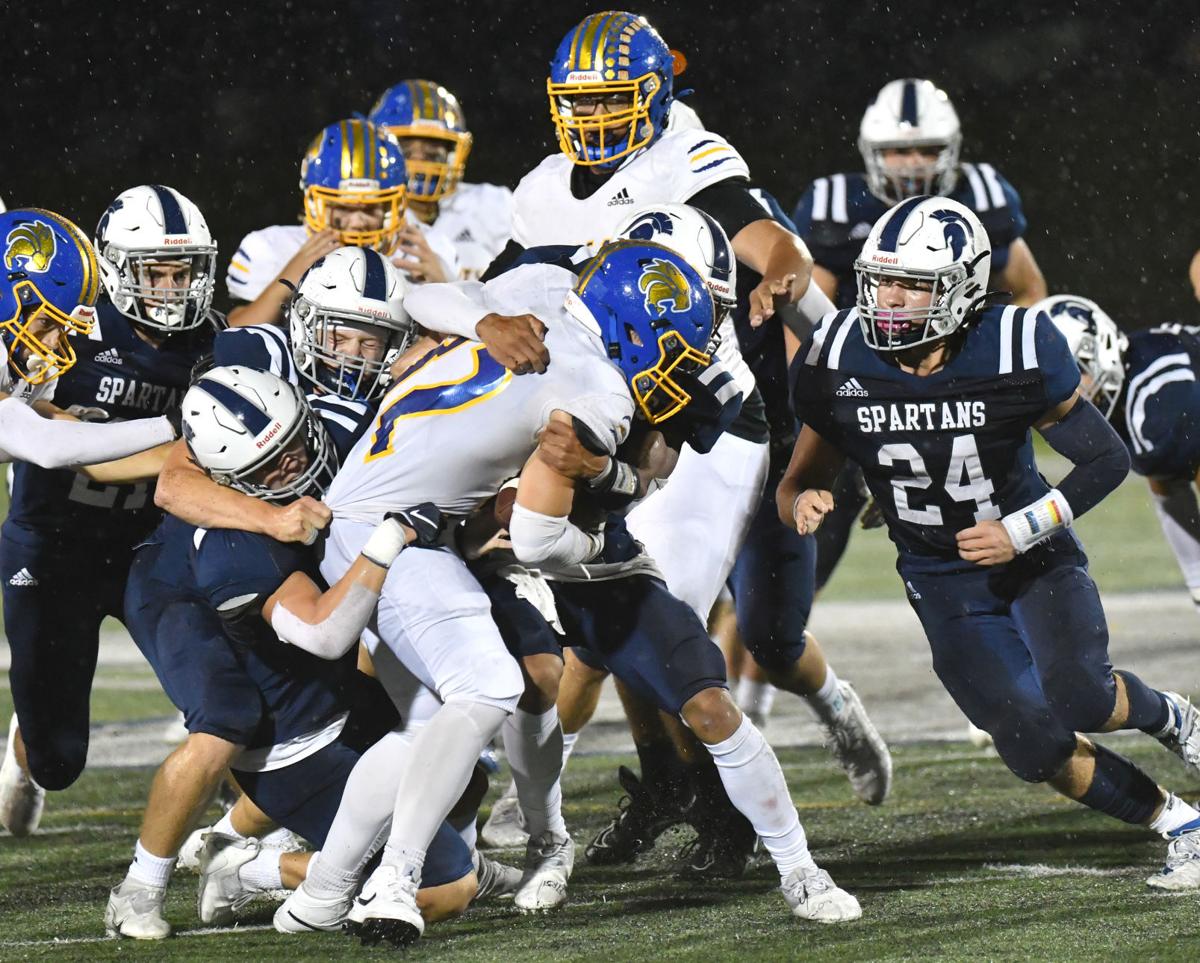 Davenport North's Cade Sheedy is swarmed by Pleasant Valley's defense during Friday night's game. The Wildcats mustered only five first downs and 93 yards in the game. 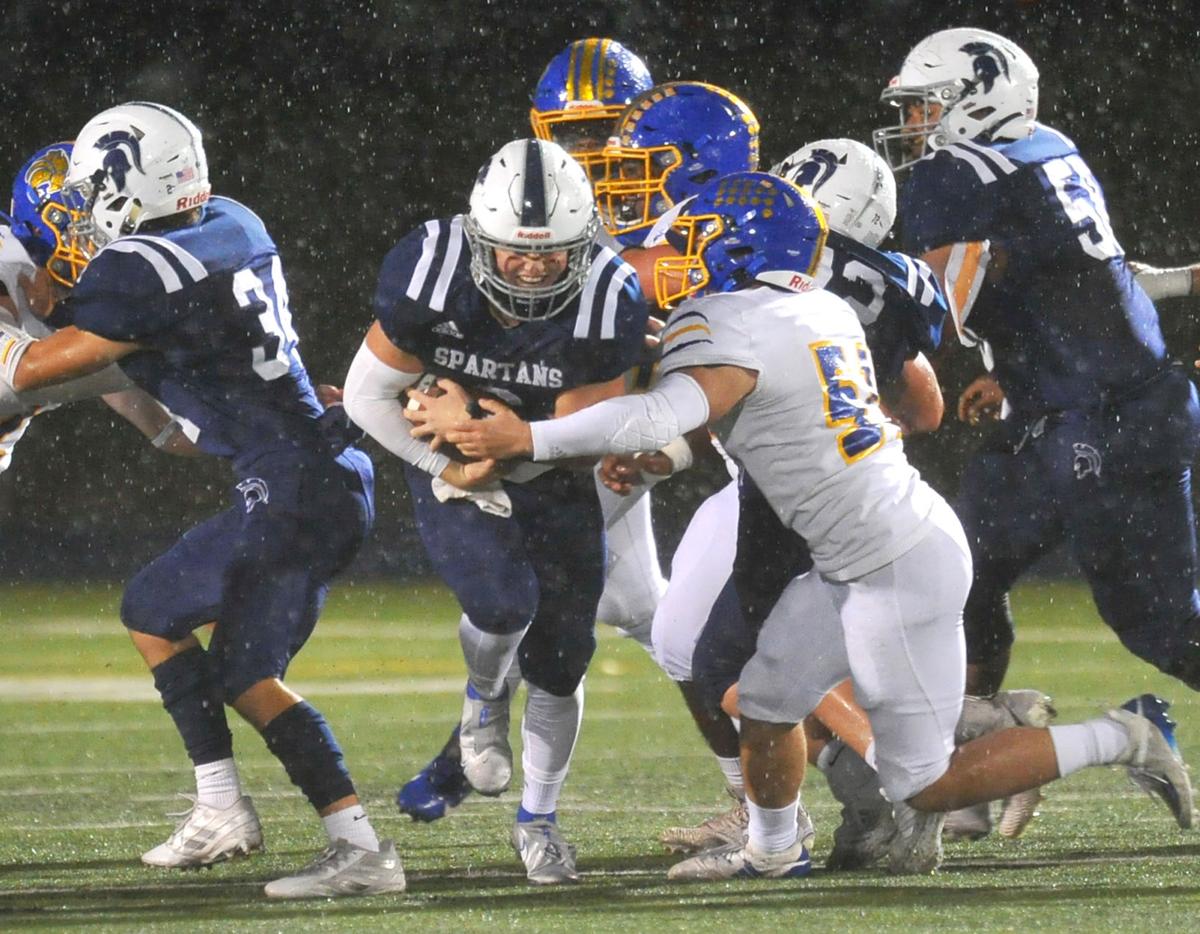 Whether it was turnovers or its defense struggling to get off the field at times, the Pleasant Valley High School football team had not put everything together in the first four weeks of the season.

The Spartans had it all clicking Friday night.

PV had two backs eclipse 100 rushing yards and its defense yielded only 93 total yards as it cruised to a 44-0 rout over Davenport North at Spartan Stadium.

“This was huge,” lineman Luke Vonderhaar said. “We figured out a lot of things tonight and we’re going to keep rolling.”

Quarterback Caden McDermott rushed for 161 yards and two touchdowns. Sophomore Tyge Lyon got his most work of the season in the backfield and compiled 110 yards and two scores.

“We played our best game of the year,” lineman Aidan Kilstrom said. “Everybody was on top of it. We came out and executed at a high level.

“We had an absolutely great week of practice, the best week by far. We played hard and were playing for one another tonight.”

It came at a pivotal time for the Spartans (3-2), who have rival Bettendorf, state-ranked Iowa City High (5-0) and Dubuque Senior (3-2) in the next three weeks. A third loss would have been costly for PV’s playoff hopes.

“We’ve battled with some tough teams, but turning the ball over has cost us this year,” PV coach Rusty VanWetzinga said. “We had a real good week, and I feel we’re going in the right direction.”

The Spartans finished with 383 yards on the ground. McDermott, who has filled in at quarterback since a Week 2 injury to senior Barrett Lindmark, accounted for PV’s first touchdown in the opening quarter and added a 42-yard scoring run early in the third to make it 30-0.

“The first week was pretty rough, but now I’m getting the hang of it,” said McDermott who also completed a 29-yard touchdown pass to Tate Lyon in the second quarter.

The Spartans leaned on Rusty VanWetzinga and Tate Lyon at the fullback position most of the season. Tyge Lyon had only nine rushes coming into the game, but carried it 19 times Friday.

“Tyge is only a sophomore, but he’s one of us,” McDermott said. “He’s a beast, and it gives Rusty and Tate some rest for defense.”

North (2-3) never could get comfortable on offense.

Nolan Mosier was 8 of 25 passing for 56 yards. He was under duress much of the game against PV's defensive front. The Spartans moved freshman Joey VanWetzinga to nose guard while four-star recruit Andrew DePaepe had a couple of sacks and Vonderhaar was in the backfield on multiple occasions.

Besides having difficulty containing PV’s front, North was penalized 14 times for 125 yards.

“A lot of mistakes we saw tonight, mistakes we’ve never really made before,” North coach Adam Hite said. “We couldn’t get the ball moving the way we wanted.

The Wildcats never had the ball inside the Spartans’ 30-yard line.

“Our defense played amazing,” Vonderhaar said. “We had consistent pressure in the pocket all night. We didn’t let them get away with anything.”

North has a short week as Iowa City High (2-3) comes to Brady Street Stadium for a Thursday night tilt. The Wildcats likely will need to win at least three, if not all four, of their remaining games to make the playoffs.

“We’ll talk quick and then we’re moving on to City High,” Hite said. “We have one day to lick our wounds and move on.”

Coach VanWetzinga said he hopes this can be a springboard for his team moving forward.

“This gives us a lot of momentum,” Kilstrom said. “We know what we’re capable of and the cat is out of the bag. We’ve got to perform at that same level next week and the week after that.

Pleasant Valley's Tyge Lyon is hit by Davenport North's Dalton Motley during the first half of Friday's game at Spartan Stadium. Lyon had 110 rushing yards and two touchdowns in the Spartans' 44-0 win.

Davenport North's Cade Sheedy is swarmed by Pleasant Valley's defense during Friday night's game. The Wildcats mustered only five first downs and 93 yards in the game.