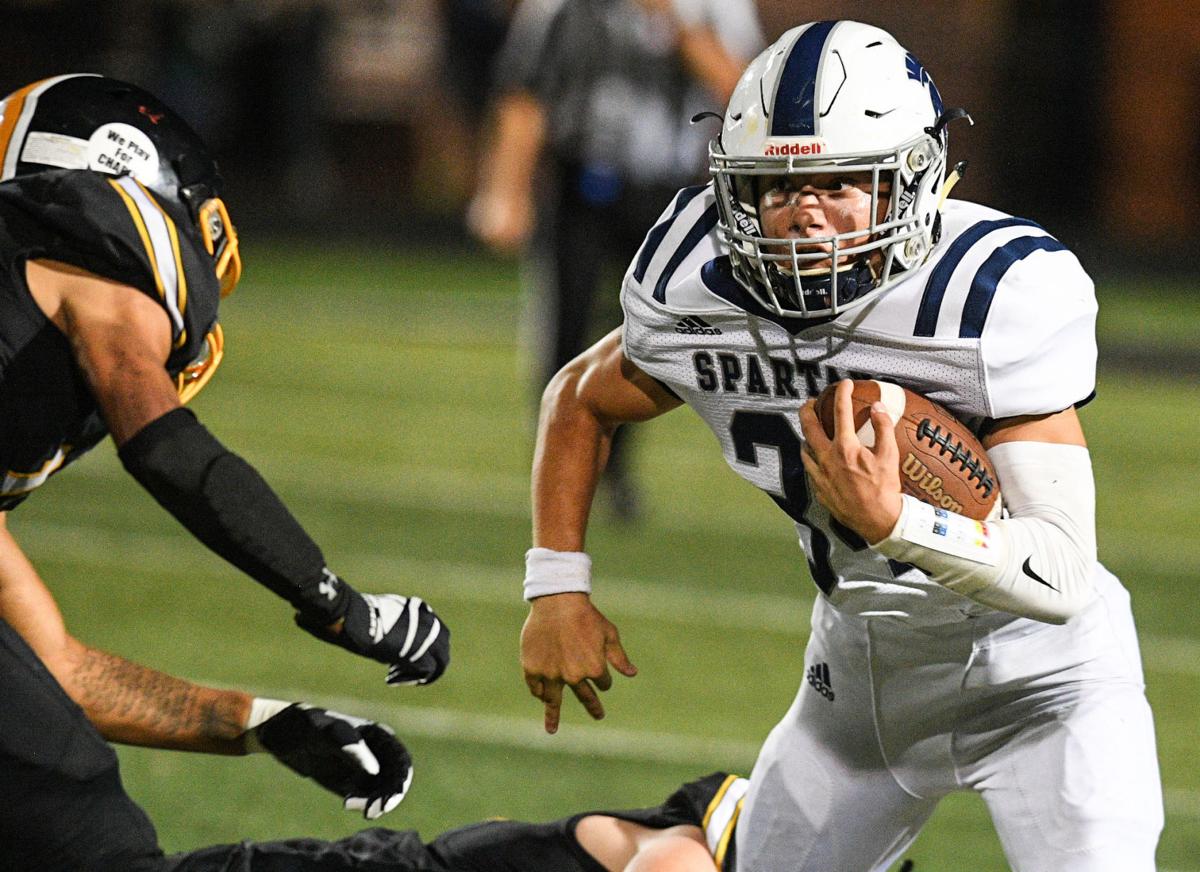 Pleasant Valley's Max Doran (32) returns the ball on an interception during the first half of Friday's game at TouVelle Stadium. 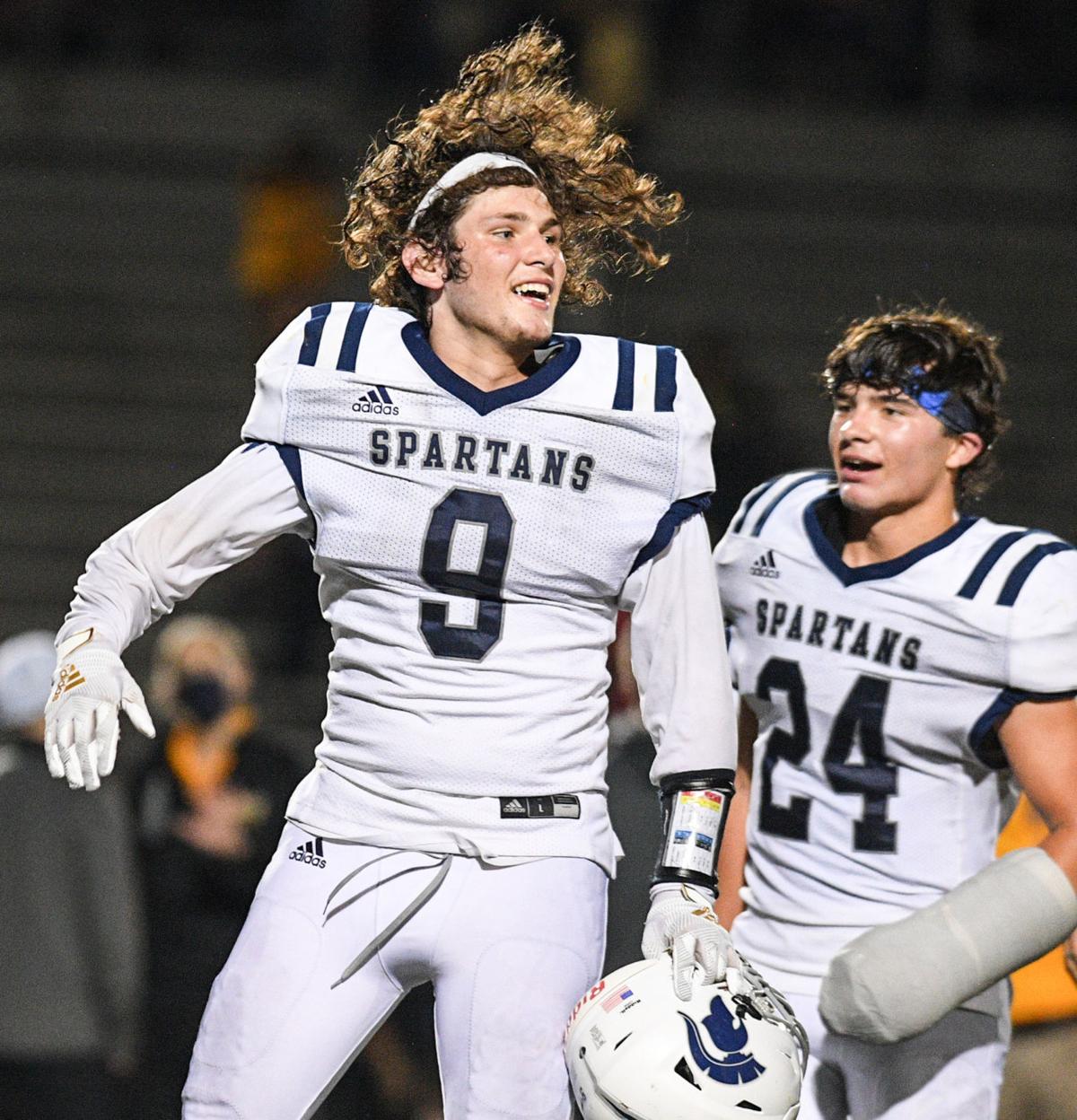 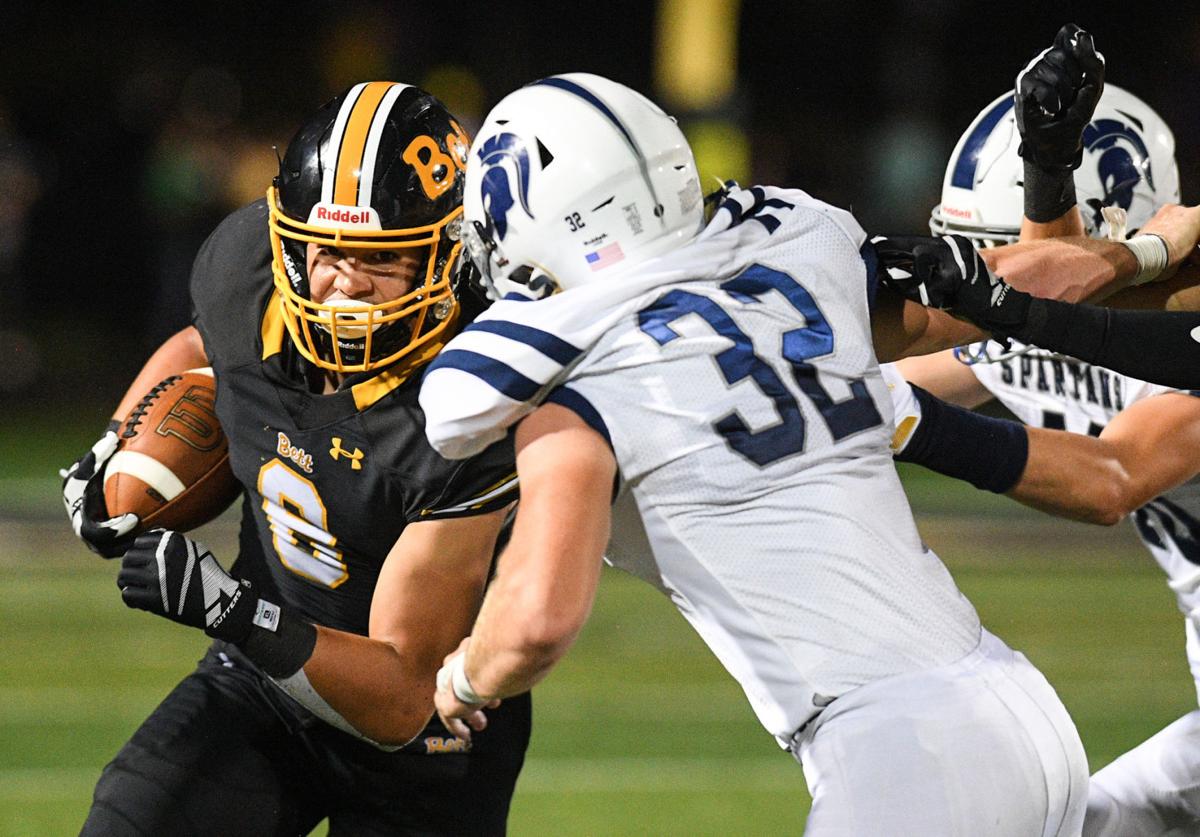 Bettendorf's Tynan Numkena has a team-high 28 receptions for 371 yards and four touchdowns heading into Friday's game against Iowa City West. 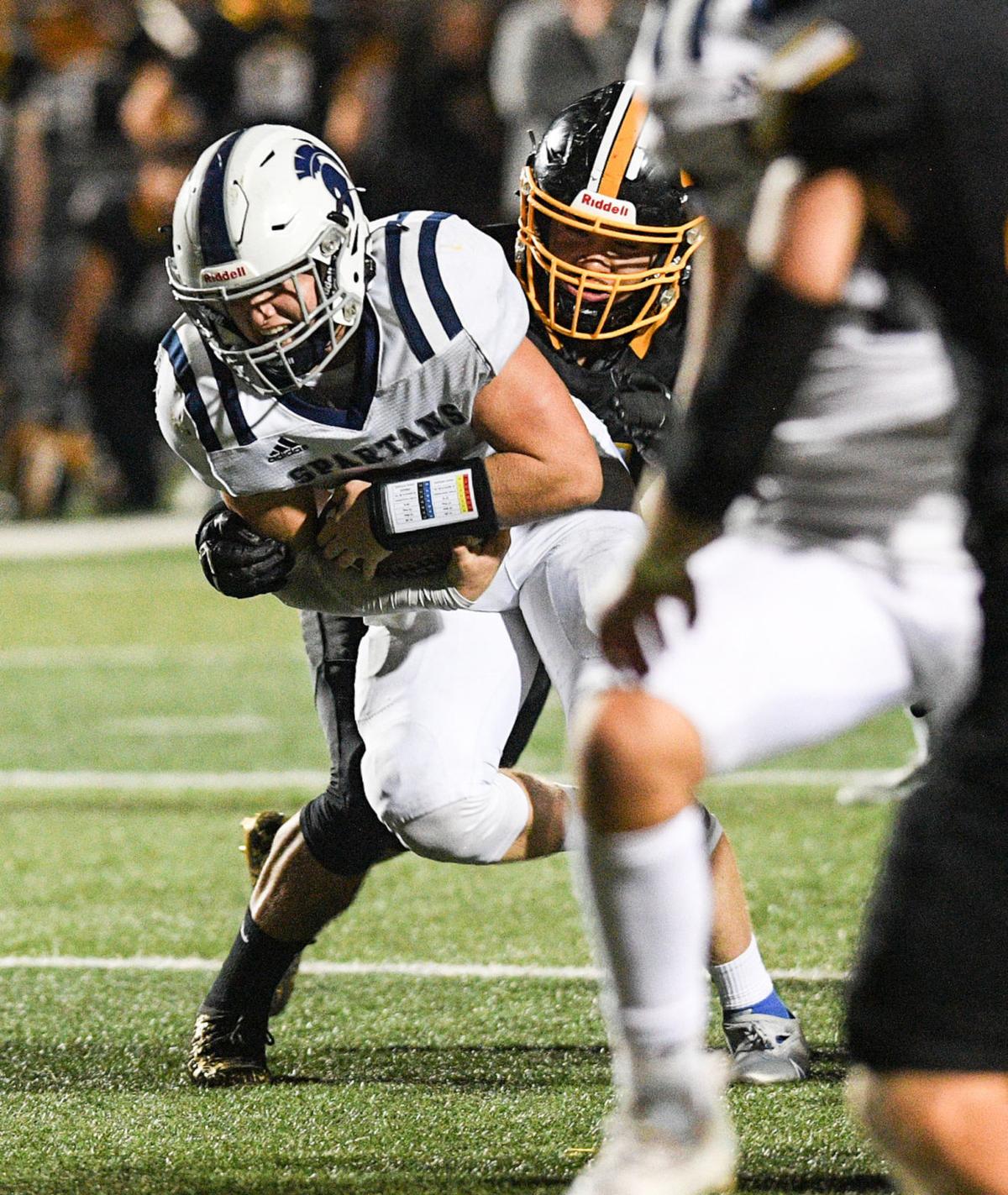 Pleasant Valley's Caden McDermott (2) rushed for 114 yards and two touchdowns as the Spartans escaped with a 14-13 win over Bettendorf.

Pleasant Valley coach Rusty VanWetzinga knew it was going to take every ounce of grit and resolve from his football team Friday night to claw past a determined Bettendorf squad playing for its season.

Forget the fact the Bulldogs were a game under .500 or had surrendered 54 points two weeks ago to Cedar Rapids Prairie.

It turns out VanWetzinga was spot-on. The contest was decided by inches. Literally.

Between Bettendorf’s two-point run try ruled short of the goal line early in the fourth quarter and a 35-yard field goal attempt that hooked left in the final minute, PV escaped with a 14-13 victory at TouVelle Stadium.

“We knew it was going to be tough,” VanWetzinga said. “They’ve played good teams and they were getting better every week. I know they weren’t feeling good about things early on, but they’ve got good players and some athletic kids.

“They’re playing as good as they have all year. For us to come out here in a tough environment, a huge rivalry game, it is a big win.”

With quarterback Barrett Lindmark sidelined because of injury, PV (4-2) had to lean on a heavy dose of Caden McDermott and its defense to claim its third straight victory.

McDermott, making his third start under center, carried the ball a career-high 30 times for 114 yards and two touchdowns.

“I’m already feeling the bumps and bruises on me,” McDermott said. “Coach told me it was going to be a rough one. They canceled our running back a lot so I had to pitch it real fast or keep it and go.”

The Spartans mustered only 129 yards of offense.

“We’re in a situation right now with our offense where we’re not real flashy,” VanWetzinga said. “We’re trying to bide time the best we can, and our guys have done a good job.”

Deadlocked at seven late in the third quarter, PV capitalized on a short field and a 15-yard facemask penalty from Bettendorf. McDermott called his number four times on the series, including a 5-yard run to make it 14-7.

Landon Butler returned the ensuing kickoff 64 yards to the Spartans’ 34-yard line. Nine plays later, Isaiah Martinez plunged in from a yard to draw Bettendorf within one.

“I felt like we had momentum and we saw something that was working,” Bettendorf coach Aaron Wiley said. “We thought we could hit it.”

Martinez took the handoff and was very close to the goal line. The line judges ruled he was short.

“I wasn’t shocked they went for two,” VanWetzinga said. “Coach Wiley wanted to gamble and I’m not going to question that. He’s won a lot of football games. We were fortunate to hold them out.”

PV ran more than six minutes off the clock on its next possession but came away with no points.

Bettendorf took over at its own 27 with 4:07 remaining.

Quarterback Christian Kautz, coming off a pair of school passing records in last week's win over Davenport Central, completed three passes. The biggies were a 15-yarder to Tynan Numkena and a 29-yarder to David Canfield to put the Bulldogs in field goal range.

Faced with fourth and 1 at the PV 18, Bettendorf sent Josh Pelzer, who started his high school career at PV, out for a 35-yard field goal attempt.

“He’s got a good leg, but I knew there was some pressure on the young man with the circumstances,” VanWetzinga said.

“I’ve wrestled with him my whole life and he’s a good kicker,” McDermott said. “I didn’t know what to think. It was very nerve-racking.”

“This is huge for us,” said junior Max Doran, who had an interception to set up PV’s first touchdown in the second quarter. “Great team win. This is one of those games we want to win every year.”

Kautz threw for 118 yards, but the Bulldogs managed only 84 rushing yards on 30 attempts and averaged less than 30 yards on their five punts.

"We got in a hole and had a field position problem," Wiley said. "It seemed we were on our half of the field for a long time."

PV still has No. 3 Iowa City High, Dubuque Senior and Iowa City West remaining on its schedule. The Spartans should solidify a playoff spot with wins in at least two of those games.

Bettendorf, now on the cusp of having its streak of 23 consecutive playoff appearances end, will have to run the table against Iowa City West, Cedar Falls and Davenport North and hope that it can sneak into the top 16 of the Ratings Percentage Index.

“We’ll see how it goes,” Wiley said. “I felt like we played our best football game against a solid team. They’re good.

“We’ve got to regroup (Saturday morning), get ready for next week and see where we are. We can still be a good football team and we’ve made a lot of strides the past two weeks. We just weren’t quite good enough tonight.”

Pleasant Valley's Max Doran (32) returns the ball on an interception during the first half of Friday's game at TouVelle Stadium.

Bettendorf's Tynan Numkena has a team-high 28 receptions for 371 yards and four touchdowns heading into Friday's game against Iowa City West.

Pleasant Valley's Caden McDermott (2) rushed for 114 yards and two touchdowns as the Spartans escaped with a 14-13 win over Bettendorf.