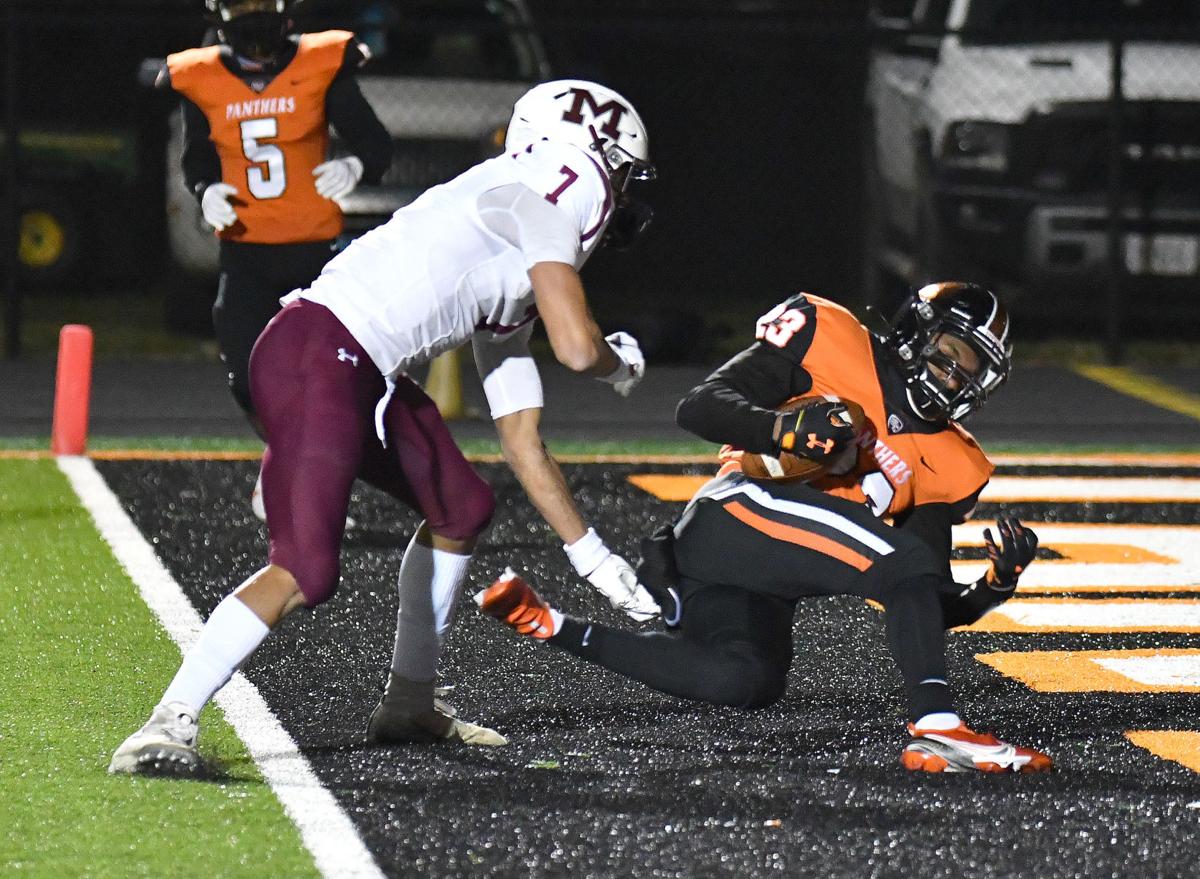 United Township's Trevell Carpenter catches the ball in the end zone with Moline's Matthew Bailey in coverage during the closing seconds in the first half Friday at the Soule Bowl. UT beat Moline to snap a 47-game Western Big 6 losing streak. 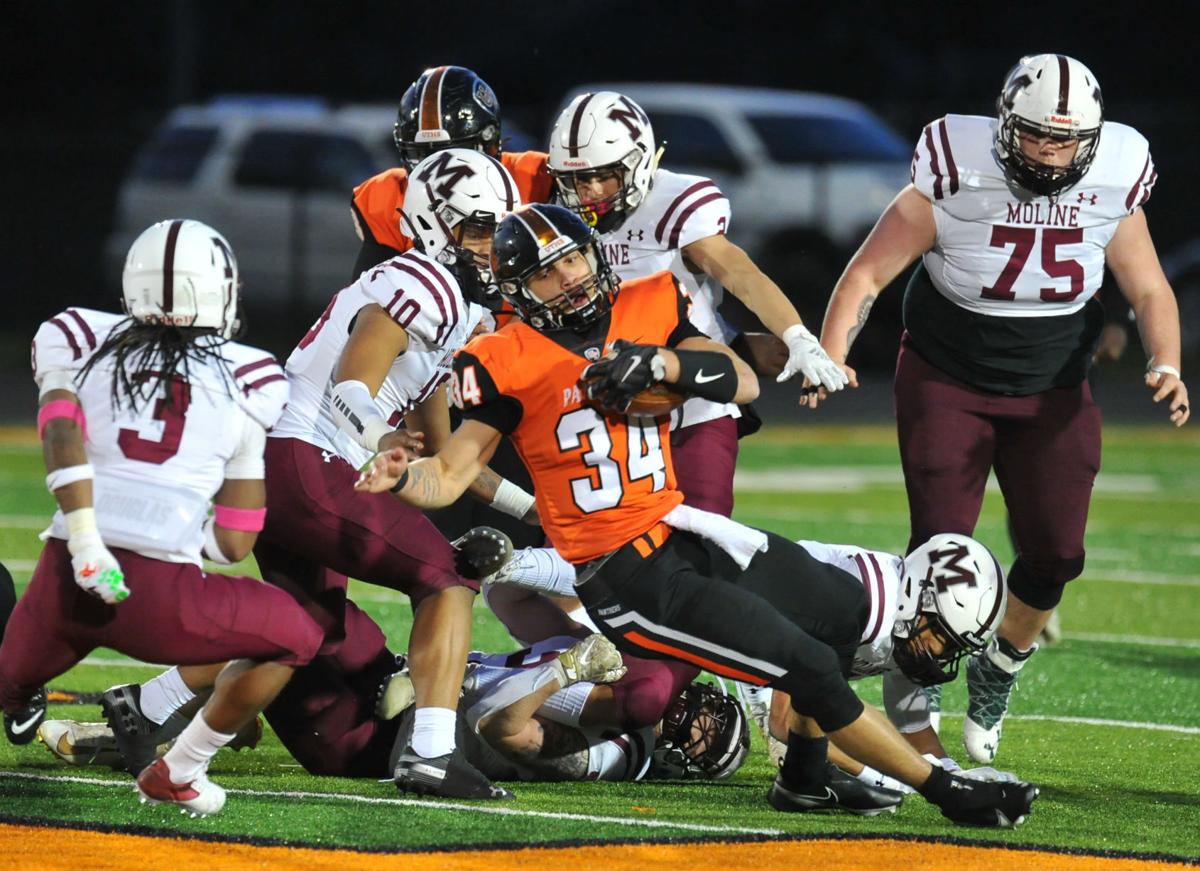 United Township's Cayne Smith spins for extra yardage as he is brought down during the first half of Friday's game against Moline at United Township. 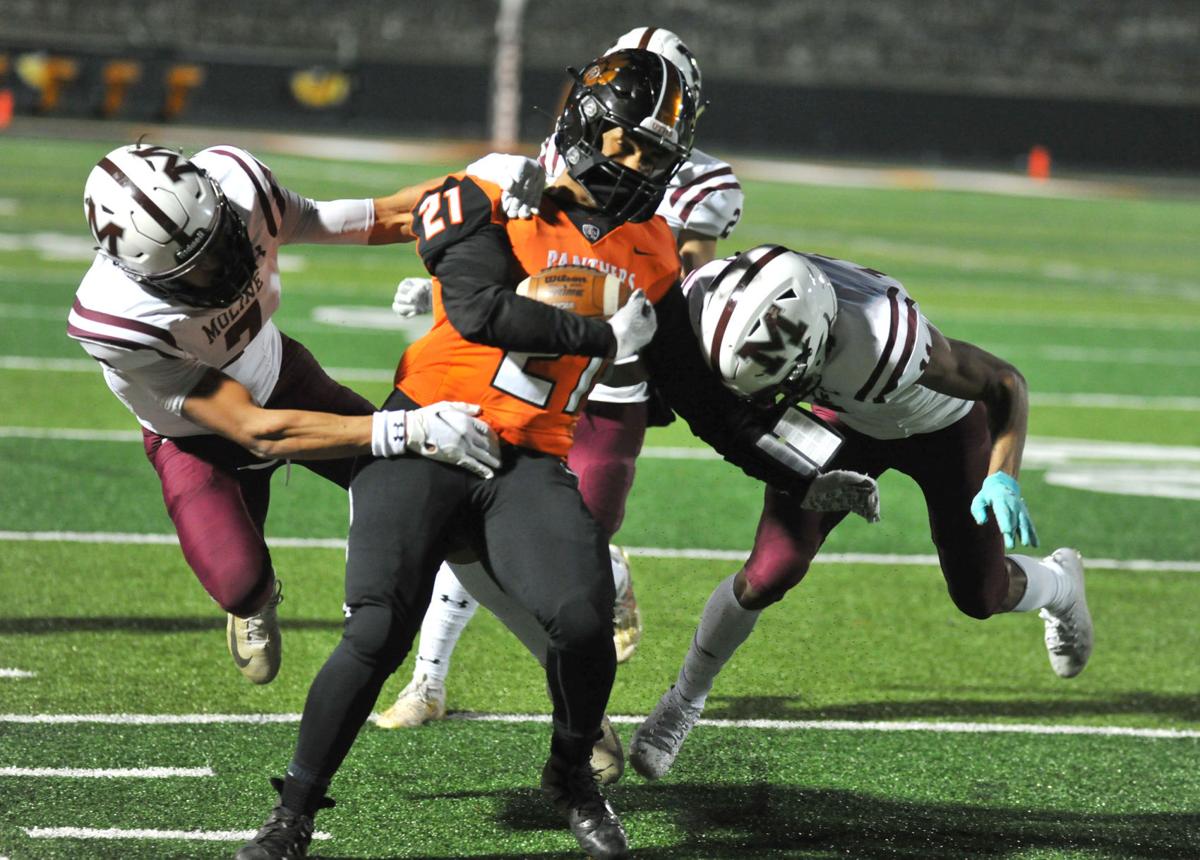 United Township's Lamont Hill is dragged down by Moline's Cranston Wall and Jaheim Thornton during the first half Friday at United Township. 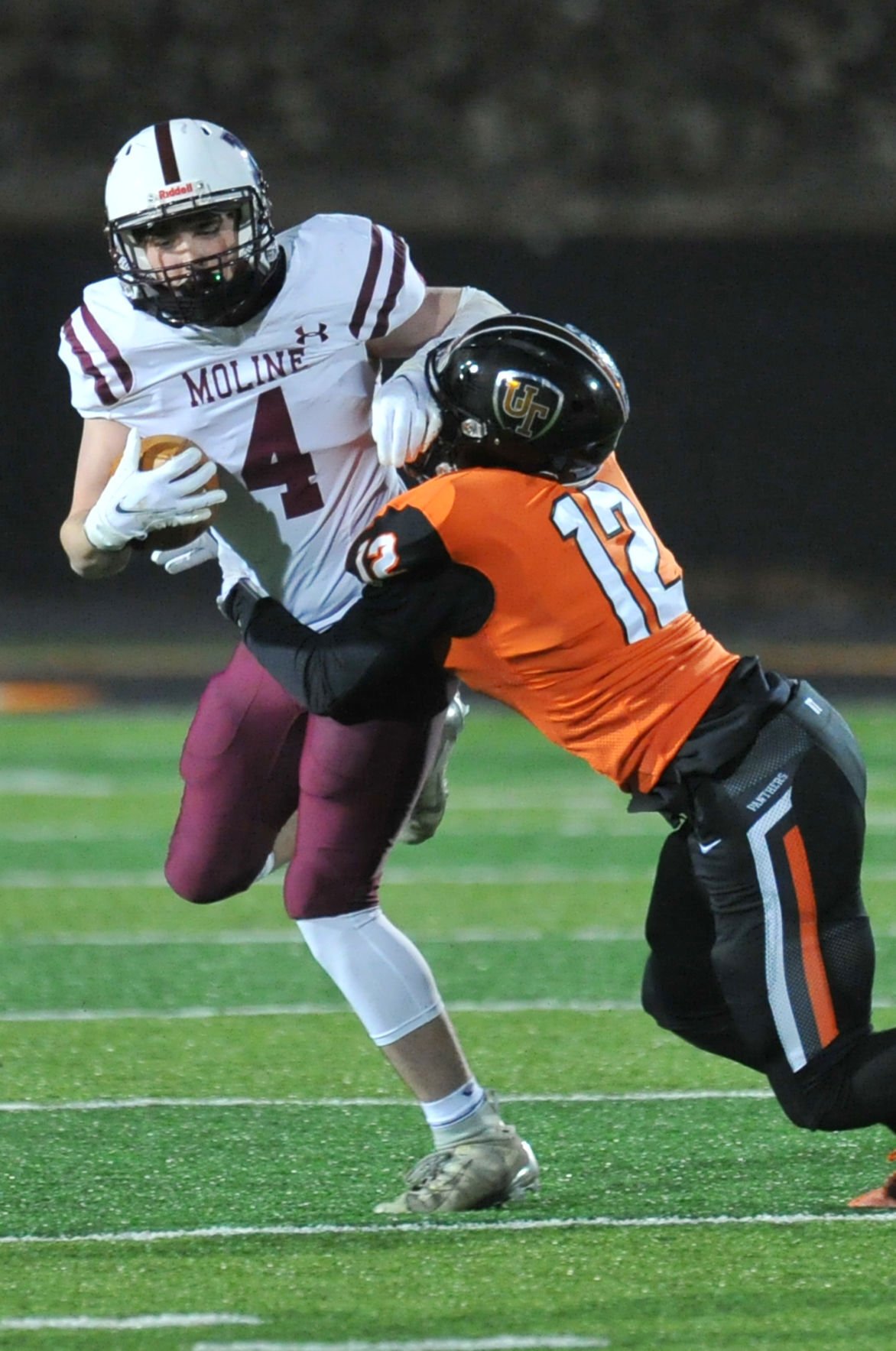 Those fireworks you heard from East Moline on Friday night weren't from an early Fourth of July festival.

It was just Western Big 6 Conference football rivals Moline and United Township popping the lights in the scoreboard at Soule Bowl as they combined for 85 points in a sizzling league showdown in which the two teams combined for 894 yards in 114 offensive plays.

Had there been fireworks, though, they would have been deserved as the Panthers logged a 49-36 victory to end a 47-game Big 6 losing streak in dramatic fashion.

At 10:16 p.m., the celebration started when a Moline fourth-down pass fell incomplete with 36 seconds left in regulation and the Panthers could milk the final seconds off the clock.

One minute later, coach Nick Welch received a Gatorade bath and the on-field celebration was on.

“This is amazing,” said UT senior quarterback Daslah Geadeyan, with the final score on the scoreboard looming over his shoulder. “You always hear about the streak, even as a kid. We really wanted to break it last year, but to finally break it this year and against our rivals, I mean what better feeling.”

The Panthers scored on their last two drives. Geadeyan, who showed tremendous poise in the pocket all night, broke out of an attempted pass play for a 24-yard scramble that broke a 34-all tie and capped a 15-play, 82-yard drive. Lasbat Adamou's PAT kick gave the Panthers a 43-36 lead with 3:02 left in regulation.

Moline went four-and-out on its next possession from its own 20-yard line as junior quarterback Alec Ponder (17-27, 212 yards with three scoring strikes) missed all four pass attempts.

The Panthers took advantage of a short field with Lamont Hill (seven carries, 41 yards, two scores) bursting over from the 1-yard line with the exclamation point with 1:21 left.

“This feels amazing, we waited so long for it,” said senior Cayne Smith, who ran 21 times for 196 yards and had a game-changing 85-yard scoring run that gave UT a 36-29 lead with 1:10 left in the third quarter.

“I am so happy for our kids,” said Welch, who has turned around the culture of the program in a quick two years. “They have done everything we have asked of them and more. When you don't get that return, it would be easy to fold and give up and they never did.

“This is a tribute to our seniors. They made a commitment they were going to change what people said of UT football and this is just the first step.”

While the fireworks may have been deserved after the game, there were plenty of them early, too.

Trevell Carpenter opened the game with a 93-yard kickoff return to give UT a 6-0 lead just 12 seconds into the contest.

The 26-yard scoring strike came with just 44 seconds left in the first half that gave Moline a 22-14 lead.

But the Panthers were not about to run out the clock as Geadeyan hit on two passes, the big one a 34-yard strike to Christian Kizer (four catches, 77 yards) to set up an incredible final play of the half.

With ample time to throw, Geadeyan found Carpenter for a 27-yard TD catch on a post route as the halftime horn sounded. Smith was stopped on the two-point conversion run and the Panthers were left on the short side of a 22-20 halftime score.

Five of the six first-half touchdowns were at least 26 yards.

The Maroons opened the second half with Bailey capping an eight-play, 67-yards drive with a 2-yard run as the Maroons went up 29-20 and had fans on the edge of their seats.

But Geaydean scored on a short run and Smith busted off an 85-yarder that put UT back in position to put the streak to bed.

There were some amazing individual efforts in the game on both sides.

UT's Smith finished with 196 rushing yards in 21 carries before leaving the game with cramps late in the fourth. He led the Panthers to 339 rushing yards with Geadeyan adding 106 on 11 carries, taking advantage of some open fields on passing attempts.

After his first pass was off target, Geadeayn completed his last nine for 139 yards and helped the Panthers survive in a game that went back and forth.

"That made it even better," said Geadeyan. "It wasn't easy. this was a good game. Both teams battled, we just got it done."

Getting it done was the bottom line as a group of 25 seniors were on the field for the biggest UT football victory in their lives.

Moline's Bailey was terrific on both sides of the ball before he was forced out of the game on a huge hit late in the third quarter. Before leaving, he rushed 12 times for 142 yards, completed one pass for 14 yards and caught two passes from Ponder for another 14 yards. He was also a leader on the defensive side, making a number of big hits in critical situations.

Tough lessons need to be learned from Moline football situation

High school is a time when some tough lessons can be learned — both in the classroom and outside of it.

It wasn’t exactly the greatest week for the Moline High School football program.

Geneseo earns its first on-field win over Rock Island since 1924.

In a sporting contest, usually it's the eye-popping plays that can turn a game or prove to be the difference in an outcome.

SHERRARD — Granted, this has been a far from usual regular season for area prep football teams.

United Township's Trevell Carpenter catches the ball in the end zone with Moline's Matthew Bailey in coverage during the closing seconds in the first half Friday at the Soule Bowl. UT beat Moline to snap a 47-game Western Big 6 losing streak.

United Township's Cayne Smith spins for extra yardage as he is brought down during the first half of Friday's game against Moline at United Township.

United Township's Lamont Hill is dragged down by Moline's Cranston Wall and Jaheim Thornton during the first half Friday at United Township.