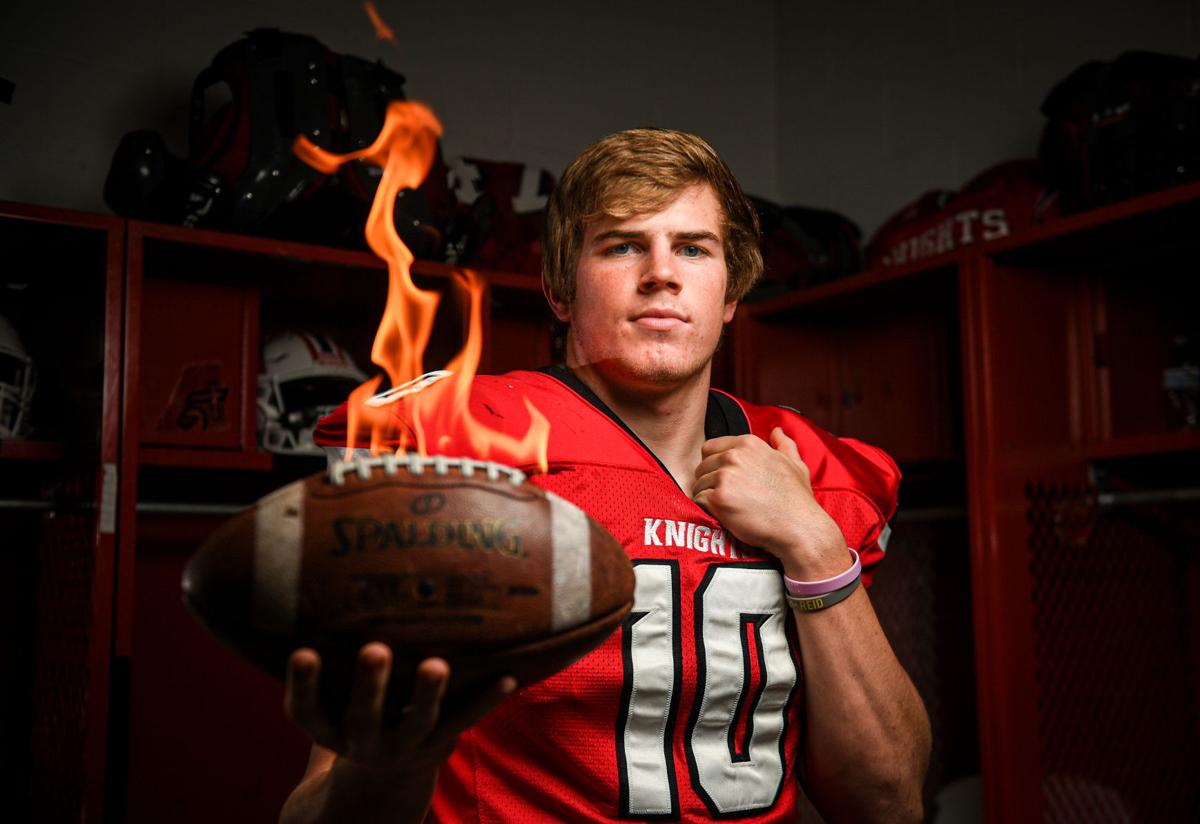 Assumption senior football player John Argo is this week’s Iowa Pacesetter. Argo rushed for a career-high 241 yards and three touchdowns, passed for 38 yards, had 50 yards receiving and recovered a fumble in the team's 24-12 win over Mount Vernon last week. 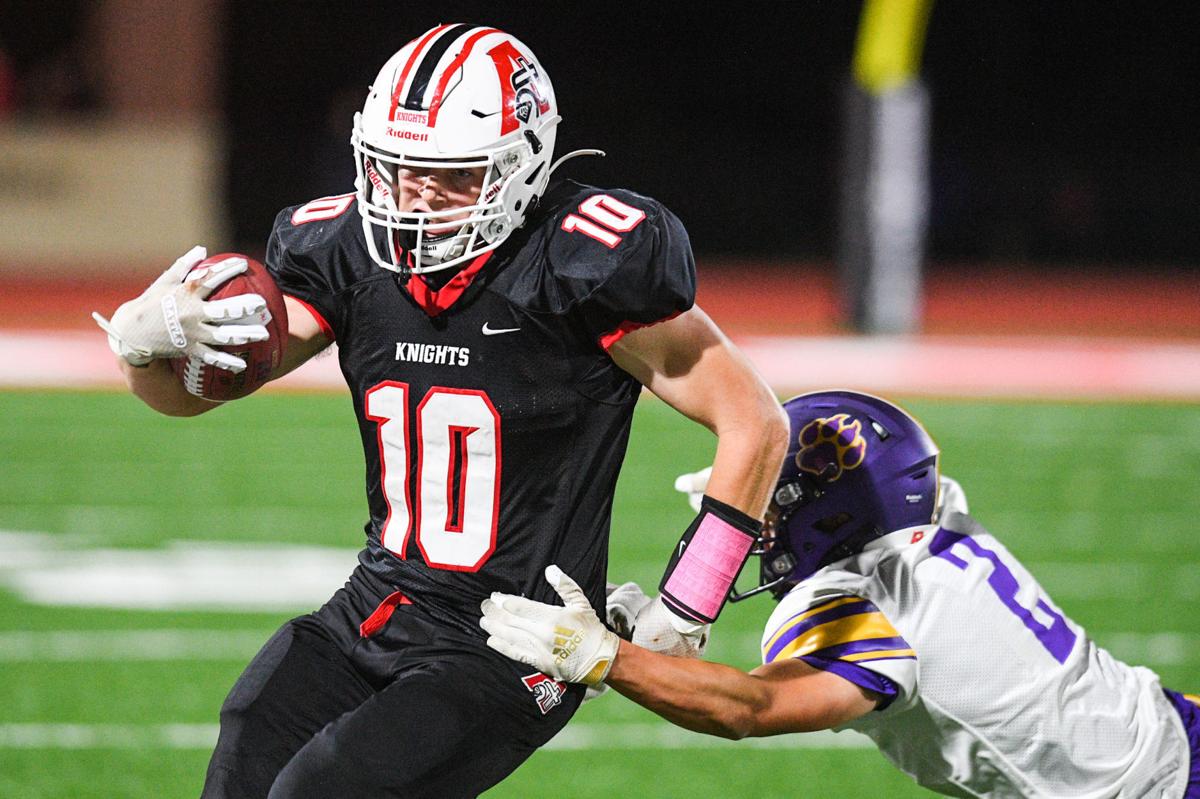 Assumption's John Argo runs the ball during a recent game against Central DeWitt. Argo leads the Knights in rushing, receiving, touchdowns and tackles. 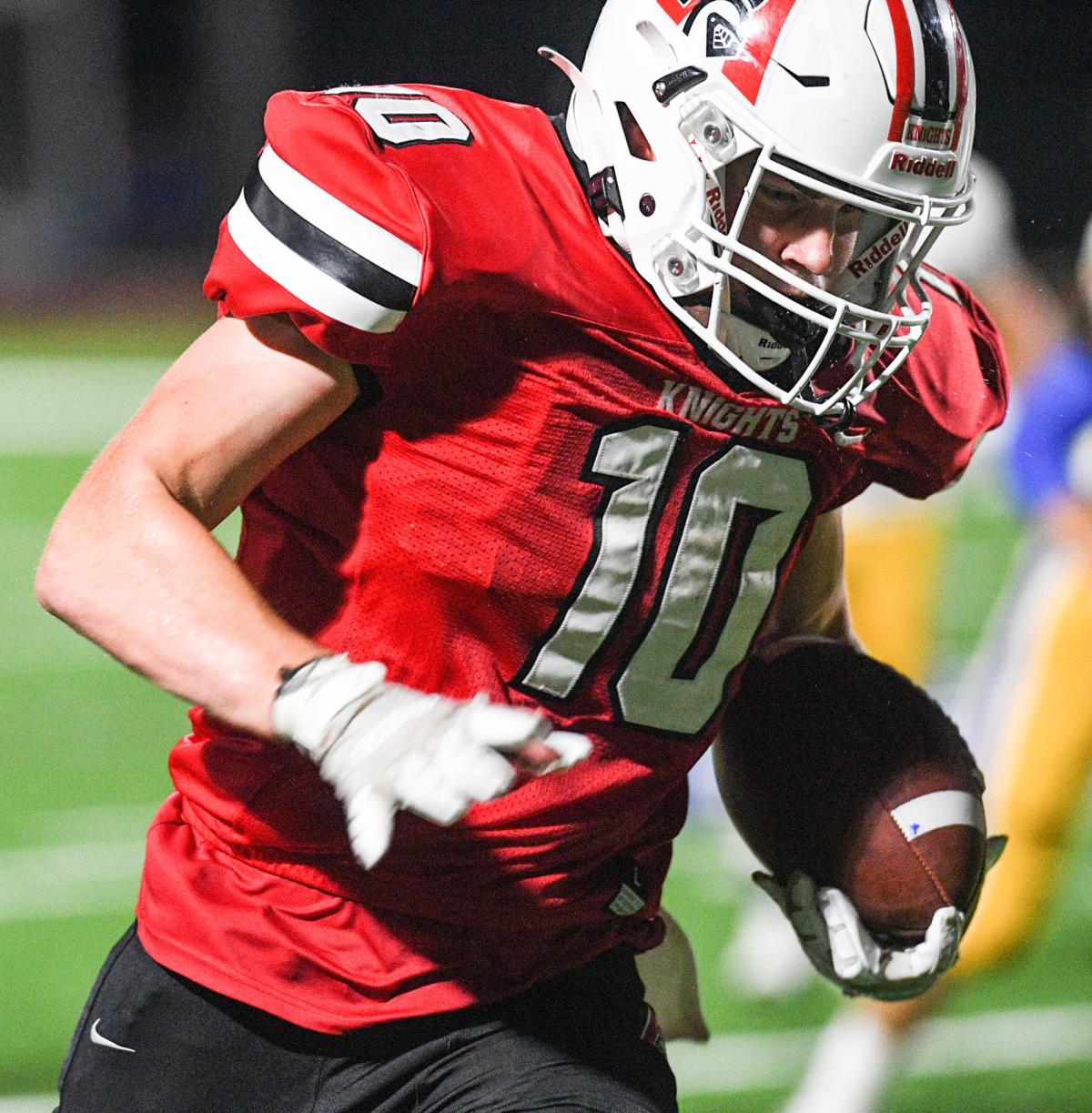 Assumption's John Argo has rushed for more than 100 yards in three of the team's six games this season.

Just how many Argos are there?

It is a question John Argo has been asked frequently during his career at Davenport Assumption High School.

“I’ve even heard, ‘Is this Willie’s kid a couple times?’” John said. “That’s a little bit of a stretch.”

Ever since Willie Argo — the oldest of Billy and Kathleen’s six children — started wreaking havoc on opponents in multiple sports almost 20 years ago, the Argo name has produced plenty of highlight-reel moments and victories for Assumption’s athletic programs.

Throw in two sisters, including Annie who was an all-state soccer player, and it is a family flush with athletic talent.

John, the last of the Argos and 14-plus years younger than Willie, is making his imprint on Assumption.

The senior and this week’s Iowa Pacesetter rushed for a career-high 241 yards and three touchdowns in last week’s 24-12 triumph over Mount Vernon. He also completed a 38-yard pass, hauled in three receptions for 50 yards and recovered a fumble.

Whether it was watching his father’s successful baseball teams or seeing his siblings and cousins compete, Argo has been coming to Assumption athletic events for as long as he can remember.

Argo doesn’t have much recollection of Willie’s high school career.

“Whenever people say something about Willie in high school, I’ve probably seen five videos maybe when I was little,” he said. “I’ve heard the stories and remember watching him play (baseball) in college and in the minors.”

Specifically, Argo remembers watching his cousin, Jake Gervase, and brother Joe on the football field. King said Argo was like Gervase’s personal attendant at games having his towel and water ready for him on the sideline.

“Every (Thursday or) Friday when I would be able to watch the games, it was always something I couldn’t wait for,” Argo said. “I couldn’t wait to be in high school and I thought these dudes were superstars. That’s what I wanted to be.”

With the name and the family’s long line of success, there can be added pressure. It never came from home, though.

“There was pressure maybe from the outside, but never from my family,” Argo said. “They were and have always been a great support system for me.”

Before transforming his body, Argo played offensive and defensive line coming up through youth football.

"I was super fat as a little kid," he said. "I was too heavy to run the ball in Rising Knights. Once I got to eighth grade, I started playing a little linebacker."

This is Argo’s third season as a starter for Assumption. He was primarily on defense as a sophomore, played both ways as a junior and has been more heavily involved as a ball carrier this fall.

“Those guys made it super easy for me last year,” Argo said. “I could just go out and play football because we had so many weapons. This year, I knew being a senior it was going to be different from a leadership standpoint and on the football field. I would have to take that next step.”

Argo has done a little bit of everything.

He can pick up the two or three tough yards in short-yardage situations. He has popped off 48-, 67- and 85-yard touchdown runs. He has sprinted past defensive backs for a 77-yard touchdown reception. He is at the center of Assumption’s defense.

“Probably the biggest thing is the way his speed has developed the last couple of years,” King said. “He’s become a really explosive player for us with the football.

“I still think defense is his best side of the ball. He just has a nose for playing linebacker.”

It leaves minimal time for rest. Other than maybe special teams or an occasional play on offense or defense, Argo is on the field as he’s averaging more than 18 carries per game and directs the defense.

In the fourth quarter of last Friday's game, the Knights used Derrick Bass more as the featured back and Argo as a lead blocker.

"We felt (Mount Vernon) was keying on him, so we used him in a different role," King said. "It is hard not to have him on the field. When the game is on the line, you want your best player out there."

The success on the field outweighs any discomfort he experiences the next day.

“Every sprint, every drop of sweat, it is worth it all to see us win that game,” Argo said. “I have a little bit of an unhealthy addiction with winning. I hate losing and everything about it.

“It probably came from losing a bunch when I was younger to my older brothers and cousins, I got sick of it early. I don’t like that feeling very much.”

That is one of the similarities among the Argos.

"He and his brothers have all been kind of quiet leaders," King said. "They don't say a whole lot. When they do, they have a lot of insight.

"Growing up as a coach's kid and being around sports as much as they have been, they have a lot of insight into it."

Assumption's coaching staff can track how much their players watch film through Hudl each week. King said Argo is among the team leaders there, too.

"He's a student of the game and studies it," King noted. "It shows up on game night."

That work ethic is just a sliver of what has made him successful. The example his father set and his brothers followed has been passed down on how to compete and act.

"My dad is just genuine and a good guy," Argo said, "and I've seen my older brothers do things right and it leads to success for them. We've got that fire in us during the game, but we also know when to keep our cool."

And like his siblings, Argo is a multi-sport athlete. He wrestles in the winter, runs track in the spring and is a starter on the baseball team.

Football, though, is his true passion and the one he plans to pursue beyond high school. He has offers from NAIA power Grand View University and Division II Missouri Western State University in St. Joseph's.

With Argo's increased speed, King believes he can find a spot as a linebacker or strong safety at the collegiate level.

"I just love the team aspect of football," Argo said. "It is the ultimate team game. You can't do it by yourself like in wrestling or have some stud pitcher on the mound in baseball. You need all 11 guys on each side."

As his career winds down at Assumption, he still has a chance to one-up his brothers in football. Willie was on a state semifinal team in 2005 and Joe made the state quarterfinals in his senior year.

Argo has the Knights (4-2, 2-0) tied for the district lead heading into Friday's game at Benton Community.

"Hopefully, we’re just getting started here," Argo said. "We’re still finding ourselves as a team yet.

"It is a little weird being the last (Argo) or Wolfe (mom's maiden name). There are no future ones coming in except my little cousin. So I want to end the name per se on a good note."

Food you would never eat: Lettuce

Song you could listen to over and over again: "All Summer Long"

Assumption senior football player John Argo is this week’s Iowa Pacesetter. Argo rushed for a career-high 241 yards and three touchdowns, passed for 38 yards, had 50 yards receiving and recovered a fumble in the team's 24-12 win over Mount Vernon last week.

Assumption's John Argo runs the ball during a recent game against Central DeWitt. Argo leads the Knights in rushing, receiving, touchdowns and tackles.

Assumption's John Argo has rushed for more than 100 yards in three of the team's six games this season.