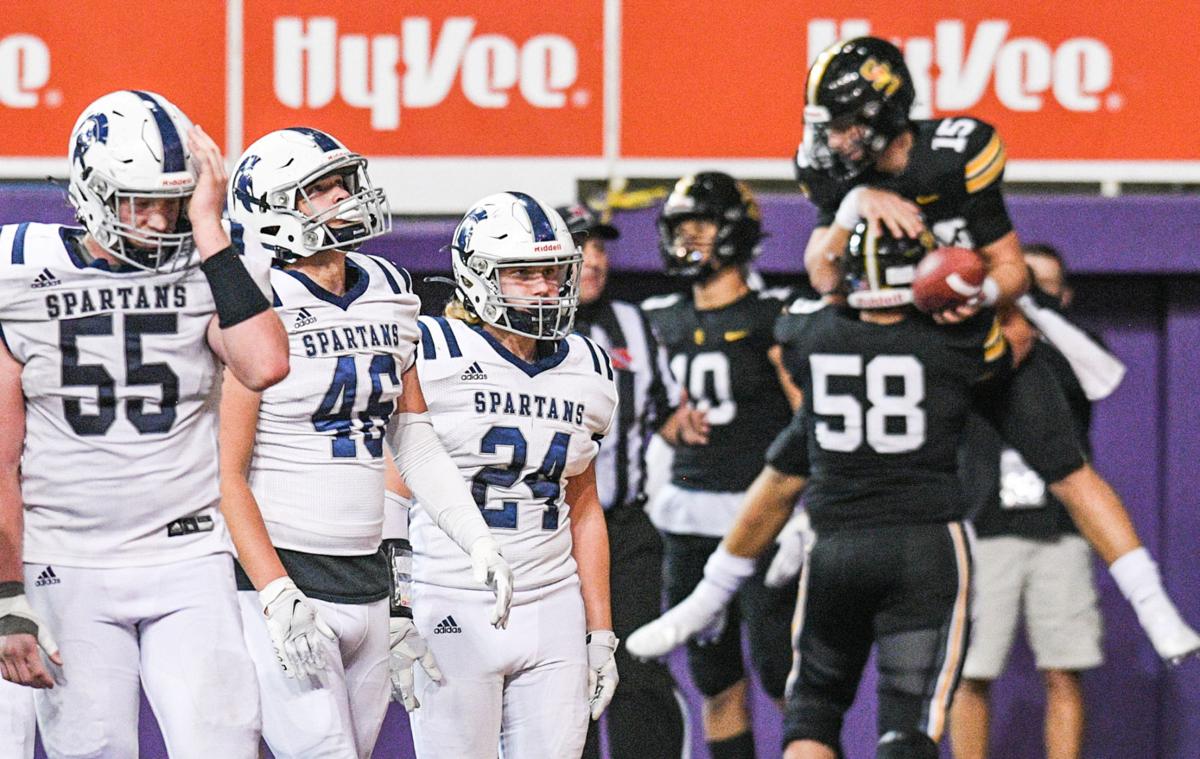 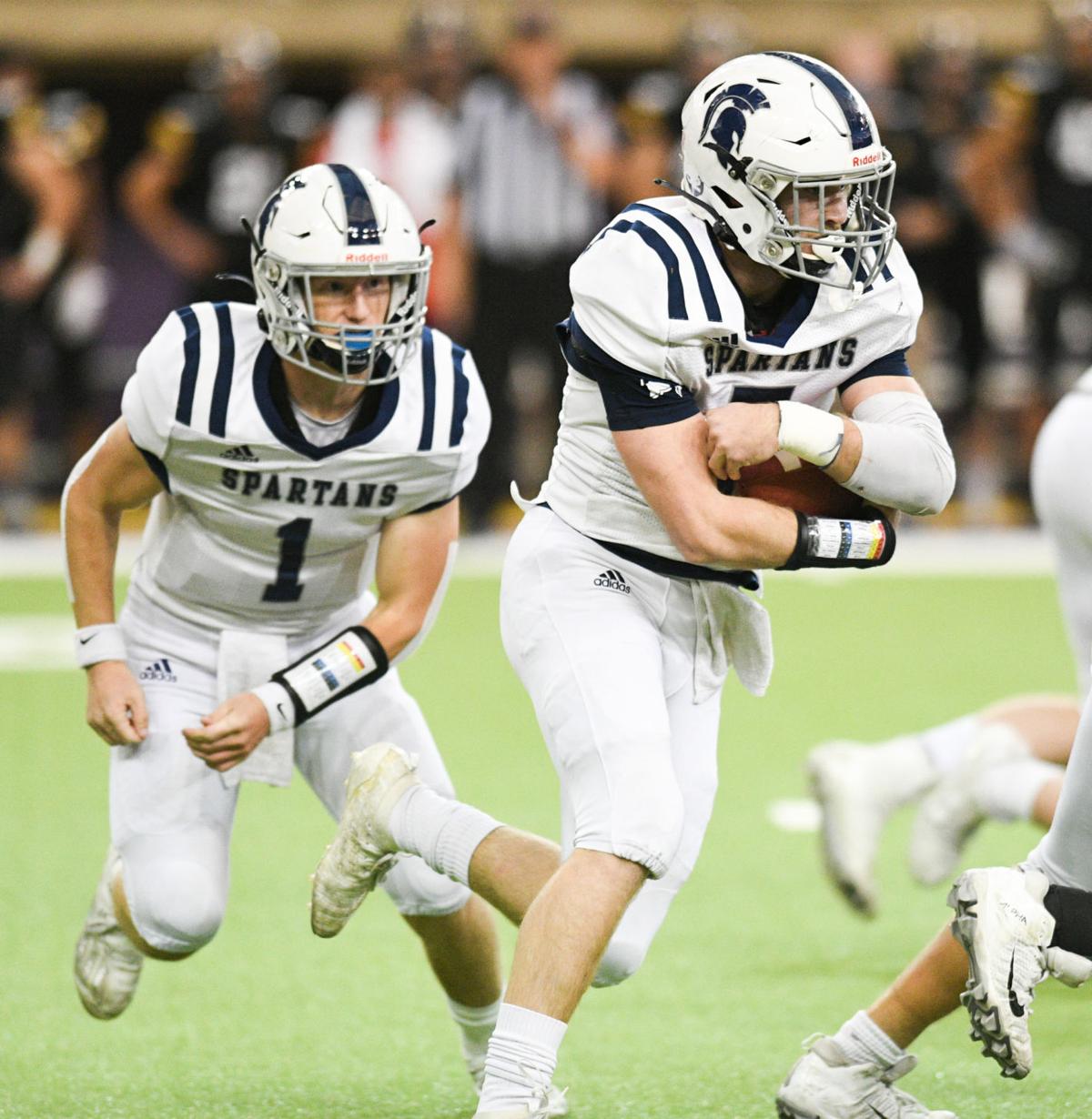 Pleasant Valley's Barrett Lindmark (1) hands the ball off to Caden Kipper (5) during Friday's Class 4A state football semifinal at the UNI-Dome. Kipper had 97 rushing yards in the Spartans' 50-10 loss to top-ranked Southeast Polk. 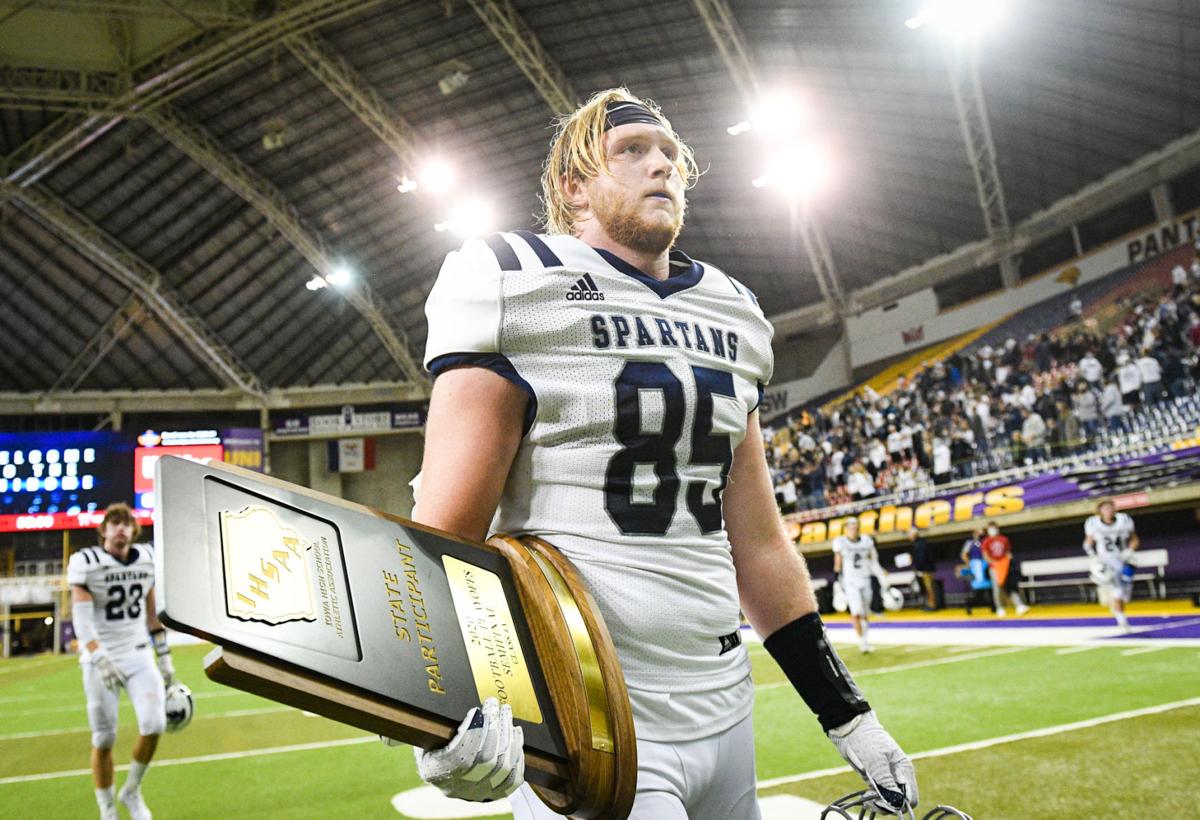 Pleasant Valley High School senior Kellen Hornbuckle carries the state participant trophy as he walks off the field after the Spartans lost to Southeast Polk in Friday's Class 4A state football semifinal at the UNI-Dome in Cedar Falls, Iowa. 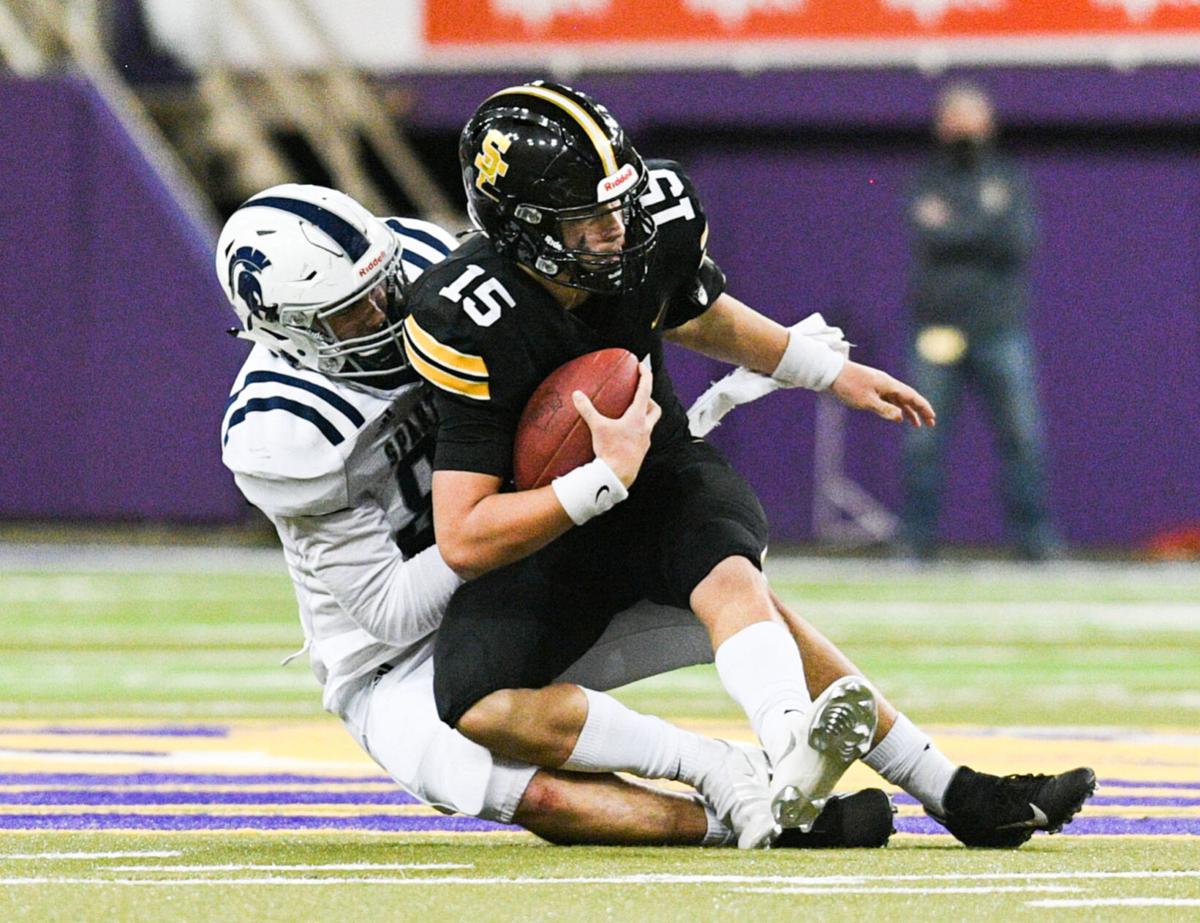 CEDAR FALLS, Iowa — Too big, too fast and simply too good.

From an 80-yard touchdown on the first snap of the game to an interception return for a score late in the fourth quarter, top-ranked Southeast Polk High School’s football team overwhelmed fourth-ranked Pleasant Valley 50-10 in a Class 4A state semifinal Friday evening at the UNI-Dome.

“That was like a Division I team we just played,” PV senior linebacker Michael Acri said.

All of Southeast Polk’s stars rose to the occasion.

Xavier Nwankpa, who is considered the No. 2 safety in the country for the 2022 class by 247Sports and has an offer from Clemson, had a team-high nine tackles, an interception and a touchdown run.

Quarterback Jaxon Dailey, with offers from Michigan and Iowa State, threw for 202 yards and two scores along with a touchdown run. Tailback Titus Christiansen racked up 176 rushing yards and found the end zone twice.

“When you get to the final four in 4A, it is a different ballgame,” PV coach Rusty VanWetzinga said. “We haven’t seen that speed.

“The margin of error is really small against a team like that and when you make some mistakes, it magnifies things. We haven't played anybody quite on that level."

PV, making its first semifinal appearance since 1996, trailed 12 seconds into the game. Dailey hit receiver Isaiah Emanuel on a quick slant and he raced 80 yards for a score.

“They get you in a bind because you want to try and stop the run, but they’re able to complete those short passes on (run-pass option) stuff,” VanWetzinga said. “It makes it tough.

“It definitely was not the way you want to start the game.”

The Spartans did move the ball at times and controlled the clock. They had the ball for 31 minutes, 38 seconds to Southeast Polk's 16:22.

PV compiled 18 first downs and had 258 yards of offense but committed a season-high four turnovers and was 0-for-8 on third down after the opening quarter.

“We couldn’t finish,” fullback Caden Kipper said. “It was either penalties, sacks or turnovers. They defended the triple option pretty well and we didn’t execute our best.

“They were physical. I always had one defender in my lap every single play.”

The Rams, though, countered with two touchdowns in the next five minutes to turn it into a rout.

"Obviously, it is a little disappointing getting hammered like that and letting things get away," VanWetzinga said, "but we'll get over it. We had a great year."

Coach Brad Zelenovich’s team will play for a state championship at 7 p.m. next Friday. Southeast Polk, with all 10 victories by double figures this season, has never won a title in football.

“This is what you work all year for,” Zelenovich said. “Everybody wants to play in the last game of the season, and we’re fortunate to have that opportunity.”

Kipper finished with 97 rushing yards and accumulated 150 total yards. He scored the Spartans’ lone touchdown on a 17-yard pass from Barrett Lindmark in the fourth quarter.

It was the final game for Kipper, who rushed for more than 2,100 yards in his 2½ seasons on varsity.

“This is not what we wanted, but we did something no other team has done in (24 years) at PV,” Kipper said. “I’m proud of that.”

The Spartans were under .500 a season ago.

“Nobody in the world gave us a chance to go 10-0 after where we were last year,” Acri said. “It is tough to see the season come to an end, but we left it on the field tonight.

“You’re not going to get bigger, faster and stronger sitting on your can,” coach VanWetzinga said. “You’re going to have to work at it, compete in other sports. To get to this level, it makes you appreciate how tough it is to get the semifinals.

“Our seniors set a great example, and now our sophomores and juniors have to become leaders. If I’m a young kid at Pleasant Valley, they should be excited to be part of it and carry on the tradition.”

Joey Petersen fueled North Scott High School's football program to a place it had never been before — the UNI-Dome. Caden Kipper helped Pleasa…

CEDAR FALLS, Iowa — No last-second touchdown catch was needed. No defensive stand was required in the final minute.

Doxsie: Versatile Hughes produces a play for the ages

CEDAR FALLS, Iowa — When a team does something as special as what North Scott did Thursday night, individual plays become magnified and immort…

CEDAR FALLS, Iowa — Just about a month ago, the North Scott High School football team’s secondary was torched in the opening half of its playo…

Pleasant Valley's Barrett Lindmark (1) hands the ball off to Caden Kipper (5) during Friday's Class 4A state football semifinal at the UNI-Dome. Kipper had 97 rushing yards in the Spartans' 50-10 loss to top-ranked Southeast Polk.

Pleasant Valley High School senior Kellen Hornbuckle carries the state participant trophy as he walks off the field after the Spartans lost to Southeast Polk in Friday's Class 4A state football semifinal at the UNI-Dome in Cedar Falls, Iowa.