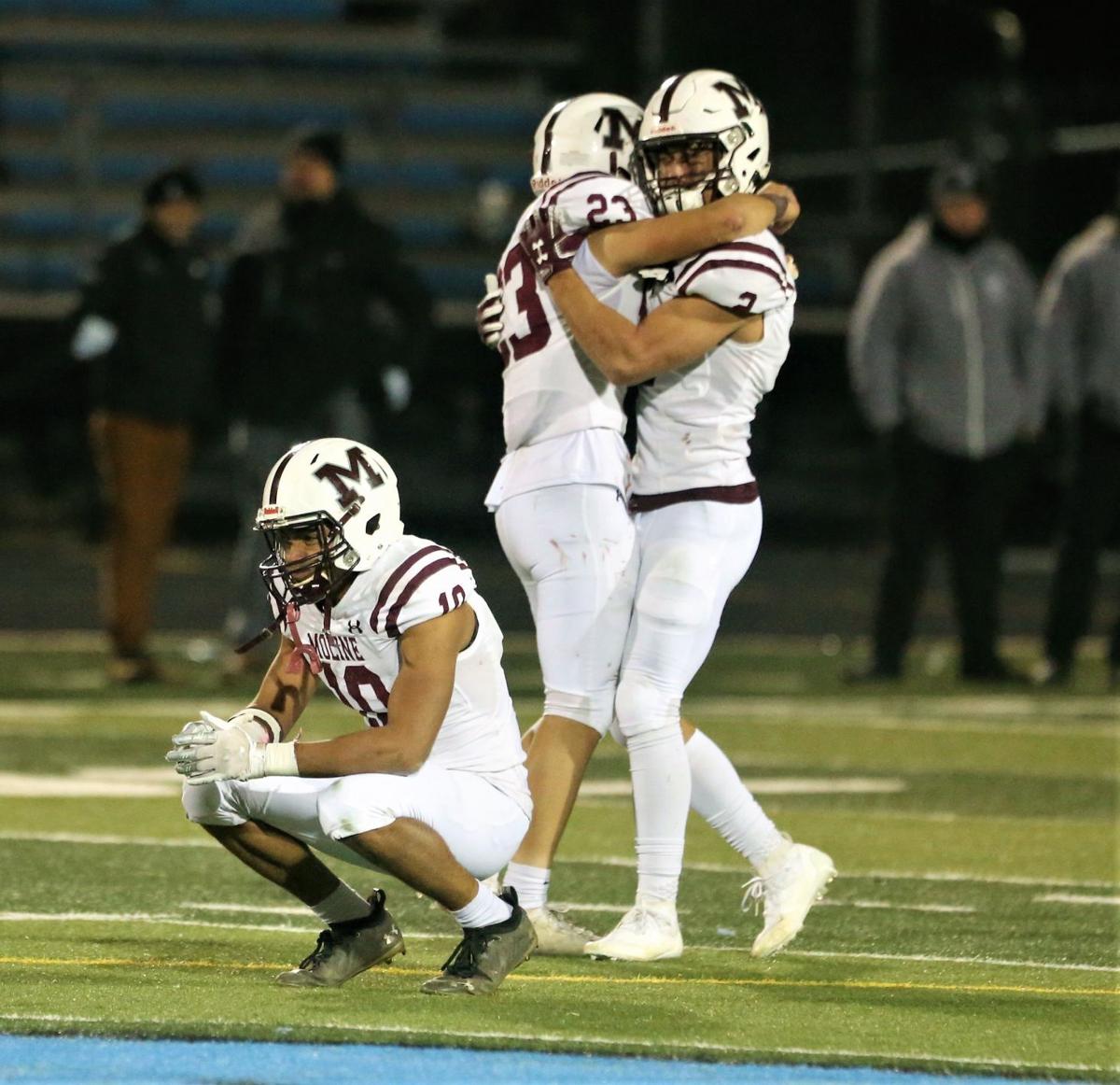 Moline's Cranston Wall (2) and Christian Raya (23) embrace while Jasper Ogburn (10) looks on in the closing seconds of a loss to Willowbrook Friday at John A. Fischer Field in Villa Park, Ill. 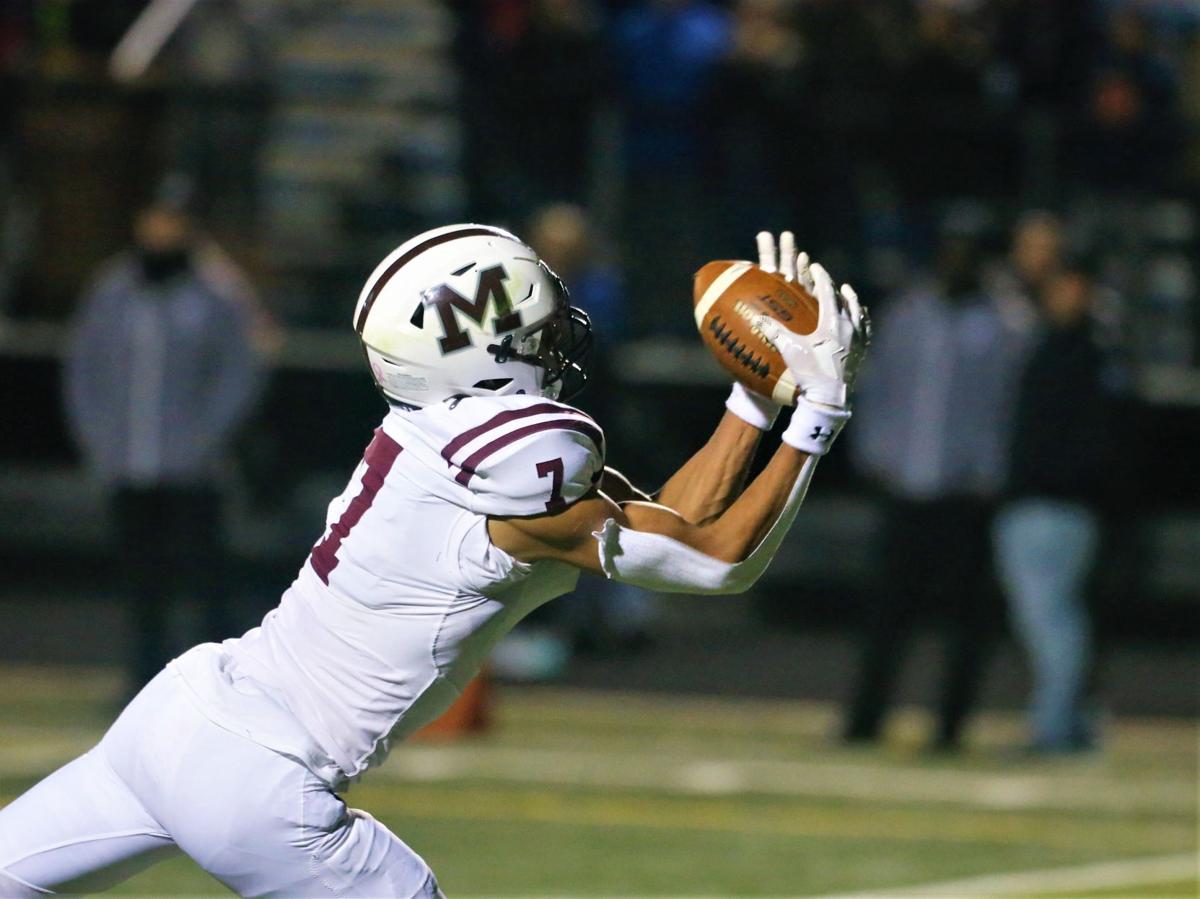 Moline's Matthew Bailey catches a touchdown pass in the second quarter against Willowbrook Friday at John A. Fischer Field in Villa Park, Ill. 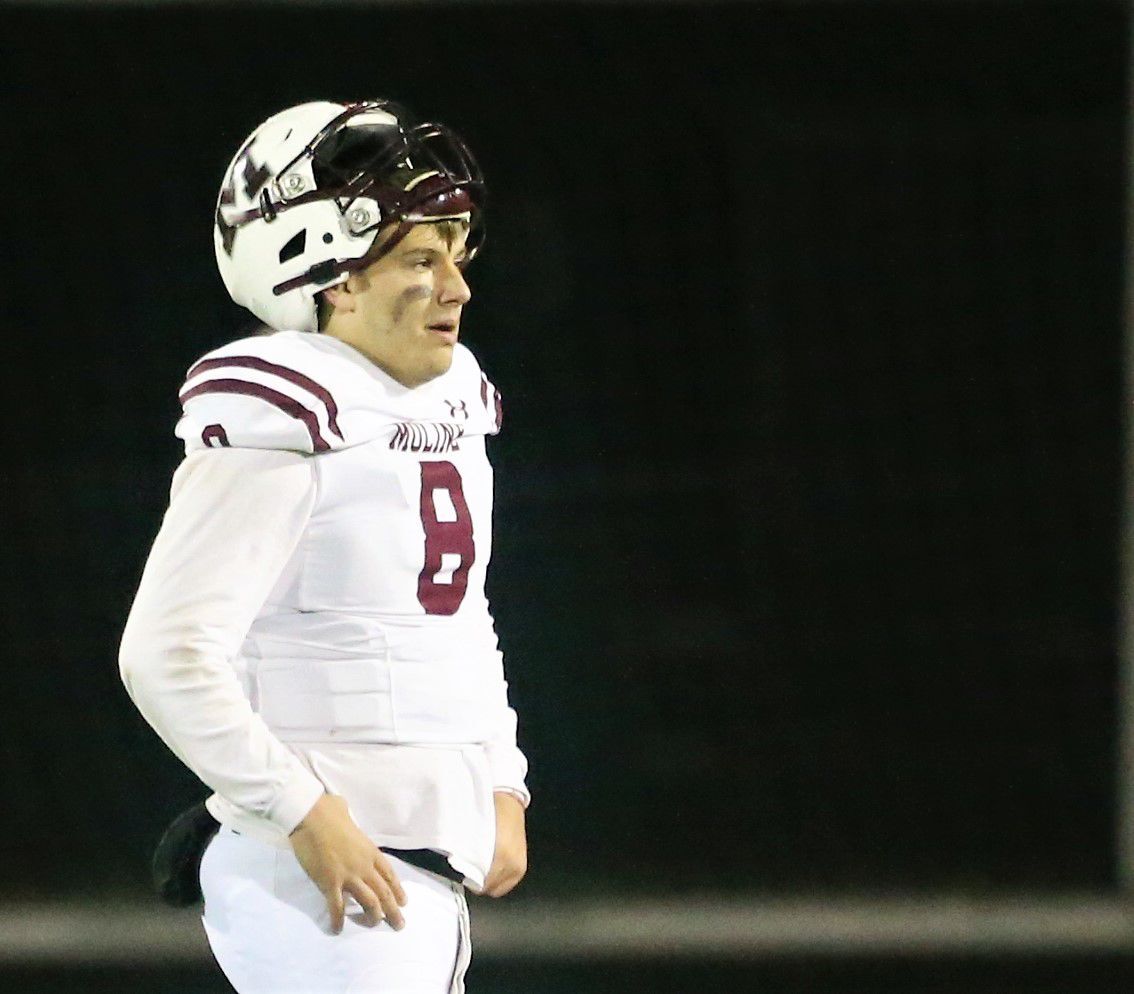 Moline quarterback Alec Ponder looks to the sideline after throwing an interception in the fourth quarter against Willowbrook at John A. Fischer Field in Villa Park, Ill. 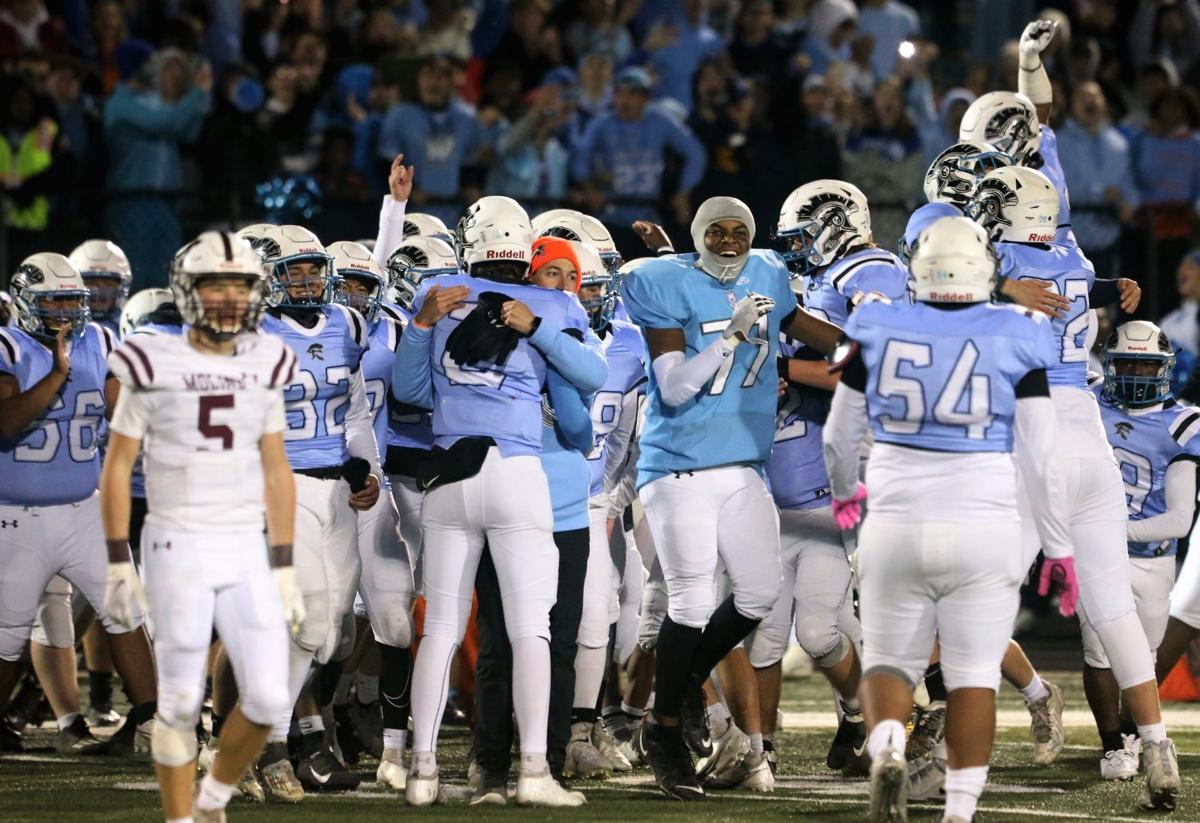 The Maroons were just a few plays away from advancing to the third round of the playoffs for the first time ever and logging their first 10-win season since 1906. But late turnovers and penalties ended Moline’s special season.

Willowbrook outscored Moline 13-0 in the fourth quarter to escape with a 30-26 victory in the second round of the IHSA Class 7A playoffs on Friday evening.

“Every time it doesn’t end in a state championship we are going to be disappointed,” Moline coach Mike Morrissey said. “I’m proud of our effort and the way these guys battled tonight. It was an up-and-down football game against a really good team. It’s tough, but over the course of the season these guys have grown and come together.”

After the game ended, the team huddled and every coach spoke. Parents stood close by and when the huddle broke, the tears and hugs were endless. If one thing was certain, it was how much these players cared about the team.

“We just told them that we love them,” Morrissey said. “Our program is based on total effort philosophy and it’s something these kids gave tonight. We can be really proud of that.”

Winners of the West Suburban Gold Conference and now advancing to the quarterfinals for the fifth straight season, Willowbrook would not quite go away. Moline held a 26-17 lead early in the fourth, but without injured senior star receiver Matthew Bailey the Maroons were held scoreless in the second half.

Willowbrook woke up in the fourth quarter after showing no signs of life in the third when it stopped Moline’s Riley Fuller on a short fourth-down carry. Warrior quarterback AJ Palicki hit senior receiver Nick Mabutas on a sliding catch for a 14-yard score to make it 26-24 Moline with 9:37 remaining.

Moline quarterback Alec Ponder was intercepted on the ensuing drive and the Warriors wasted no time to respond once again. On a trick play, receiver Joe Tumilty found Mabutas for a 56-yard touchdown. Mabutas was running free horizontally about 20 yards down the field and his speed did the rest. The Warriors took their first lead since the second quarter with 6:14 remaining.

Moline (9-2) drove down the field but fumbled on a short fourth down carry. The Maroons earned a stop, but Ponder threw another interception to end it. Penalties gave the Maroons long distance downs, which resulted in turnovers. Moline ended the game with eight penalties for 69 yards and four turnovers.

“Penalties have hurt us all year,” Morrissey said. “That hurt us a little in the third quarter and put us in bad field position situations. Ultimately, we had opportunities and I’m sure we will look back on them and be disappointed, but you can’t change the outcome. You have to be thankful for the opportunity we had with these kids and strive to be better going forward.”

But it wasn’t all bad. Moline’s normal magic was there for the first three quarters. No play encapsulated that more than Ponder’s 30-yard hail-mary as time expired in the first half that was completed to Cranston Wall in the back right corner of the end zone to extend the Maroon lead to 26-17.

The first half also had one of the best catches in the entire season for the Maroons. Bailey, the WB6 receiving yards leader, made a highlight reel catch by jumping backwards and fully extending his arms up to snag the ball out of the air. Two plays later Ponder hit Bailey on a post route for a 34-yard touchdown pass to put Moline ahead 20-17. But, Bailey landed on the same shoulder he injured at Sterling and remained on the ground for a considerable length of time. He walked off the field under his own power, but did not return. Bailey had two catches for 73 yards and a touchdown.

After the game, Morrissey said on Twitter that Bailey broke his collarbone.

“Our kids have done that all year round,” Morrissey said. “They have always made big plays when we needed them too. Alec made some nice throws and obviously Matthew is incredible. Cranston basically stepped up every game all year. He is a warrior. We are proud of our guys. We really are.”

While Moline led for much of the game, Willowbrook actually jumped out to an early lead. The Warriors got the scoring underway and didn’t waste any time. Willowbrook covered 66 yards in just two plays on the first drive in 30 seconds to take the lead. Palicki hit junior Tumilty in stride for a 40-yard score.

Moline responded with a much-needed touchdown of its own while trailing 10-0. After two long completions to Noah Harrison, senior Gavin Grace converted a fourth-and-two with a three yard rush and followed that with a 4-yard touchdown run.

Moline, winners of the Western Big 6 Conference with a 7-0 mark, also had the most impressive drive of the night, a 15-play, 97-yard drive that took seven minutes. Grace found the end zone for a second time with a 2-yard run to cap it off.

Ponder threw for 166 yards and two touchdowns. Fuller had 98 rushing yards. Cranston Wall had 83 total yards and a touchdown.

Willowbrook also defeated Moline in the 2019 playoffs, 48-21. The Warriors will play Wheaton North next week in the quarterfinals.

Photos: Moline falls to Willowbrook in second round of Class 7A playoffs

Moline's Cranston Wall (2) and Christian Raya (23) embrace while Jasper Ogburn (10) looks on in the closing seconds of a loss to Willowbrook Friday at John A. Fischer Field in Villa Park, Ill.

Moline's Matthew Bailey catches a touchdown pass in the second quarter against Willowbrook Friday at John A. Fischer Field in Villa Park, Ill.

Moline quarterback Alec Ponder looks to the sideline after throwing an interception in the fourth quarter against Willowbrook at John A. Fischer Field in Villa Park, Ill.