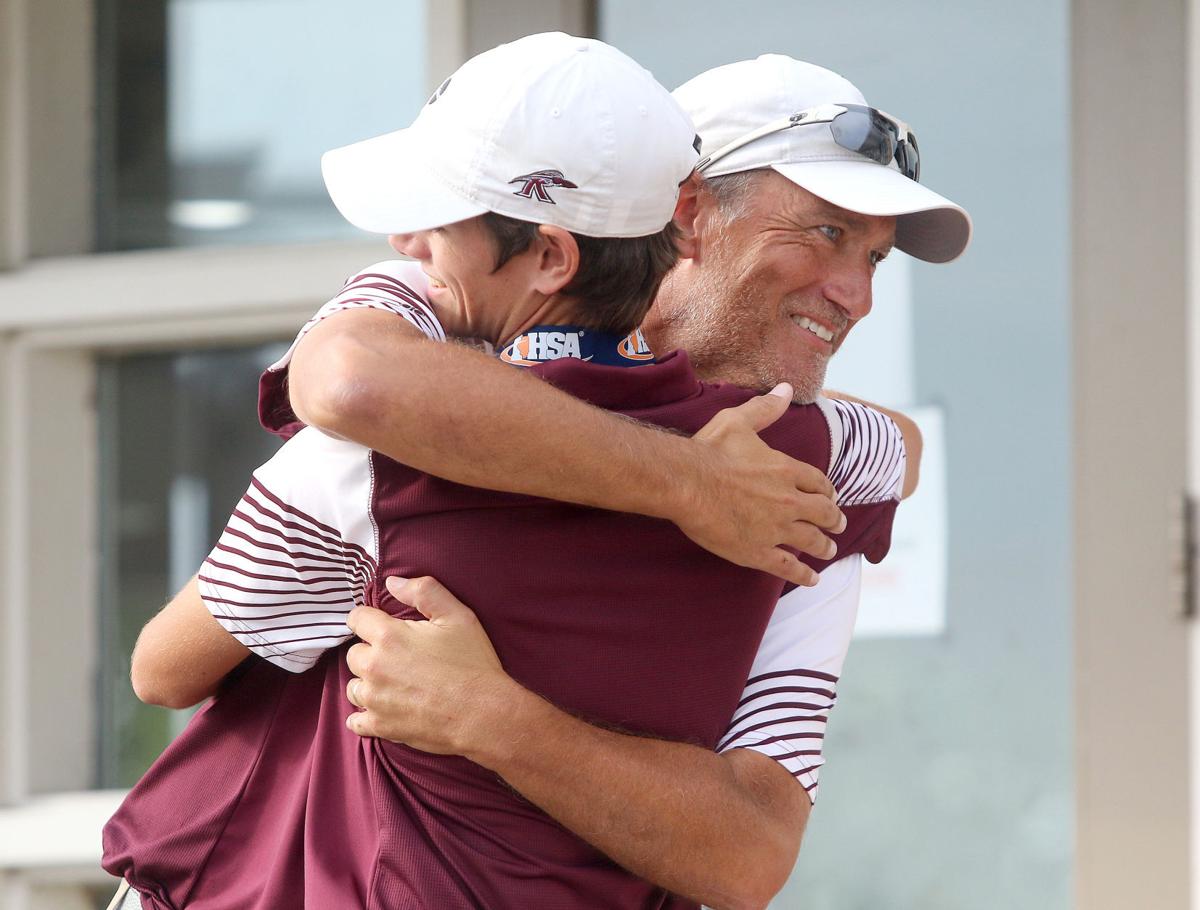 Drew Hall receives a hug fit for a champion from his dad and coach Darren Hall at the Illinois Class 1A state golf finals awards ceremony on Saturday in Bloomington. Hall's 2-over par 74 Saturday helped propel him to the Class 1A state title. 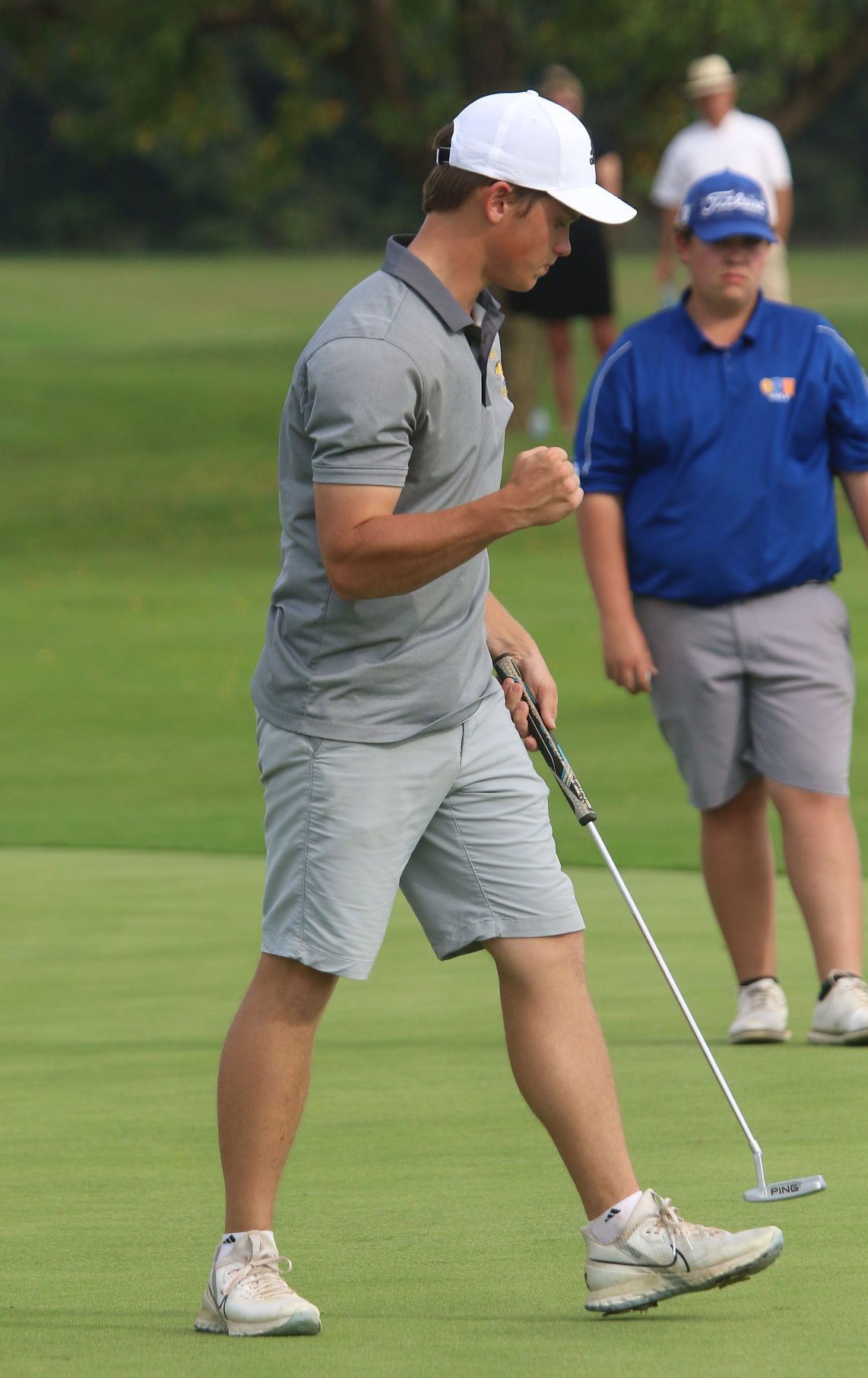 Sherrard's Brennan Welch pumps his fist after making his final putt at the Illinois Class 1A state golf finals on Saturday.

Prior to Saturday afternoon, only one member of the Rockridge High School boys' golf program had earned the right to be called a state champion.

"It's awesome. I'm very honored," said Hall. "I don't know Jonas too well; I've never met him, but this is definitely elite company. Honestly, I don't know if this has sunk in yet."

Coupled with his 2-under 70 he shot on Friday, Hall finished with a two-day total of 144 strokes, even-par for 36 holes at the par-72 Prairie Vista Golf Course layout.

"I thought if I played well (Saturday), I'd have a good chance," he said. "I was 100% not trying to focus on anyone but myself, just take it one shot at a time."

Hall bested Vandalia senior Chase Laack, with whom he was tied after the first round, by two strokes for the state title, but the result was not a foregone conclusion late in the round.

In fact, it was not until Laack took bogeys on the 14th and 16th holes — coupled with a bogey on No. 8 and a double bogey on No. 9 — that the knot was untied and Hall could feel himself closing in on the championship.

"I didn't know what I needed to shoot, but as long as I kept making pars, I figured I'd be alright," Hall said. "I actually watched (Laack's) last three holes, and when I saw him bogey on the 16th, I felt good after that."

Hall carded 12 pars along with birdies on the No. 2 and No. 8 holes, sticking to his game plan. But even with a two-stroke lead and two holes remaining, he wanted to hold off on celebrating.

"He still could've had birdie-birdie (after bogeying the 16th), and even on No. 18, he could've holed out there. You just never know," said Hall. "I knew I couldn't celebrate too soon."

Hall's championship, which goes with a third-place state finish two years ago, not only pairs him with DeWitte as Rockridge individual state winners but he joins Dylan Daxon (third in 2011, eighth in ’12) as the Rockets' only multiple state medalists.

While Rockridge missed the state team cut by one stroke on Friday, Hall was joined at Prairie Vista Saturday by classmate Dan O'Neill, who in turn capped his own high school career with a flourish.

Shooting a 4-over 76 with a pair of birdies, O'Neill's 36-hole total of 151 strokes earned him a 10th-place finish and an all-state medal. He is the sixth Rocket in team history to achieve that feat.

O'Neill felt that if not for a balky putter, his all-state finish could have been even better.

"My putting was just awful. I couldn't make any putts outside four feet," he said. "There were a ton of lip-outs."

After carding a 75 on Friday, O'Neill felt that a medal was well within reach.

"I would say the possibilities were endless if I played well (Saturday)," he said. "I just had to go out, try to play my best game and see where it went from there."

"I'm very proud of Dan," said Hall. "We were really hoping the whole team would get through, but I feel like we definitely represented Rockridge well."

Welch fired a 3-over 75 on Saturday with three birdies and finished with a two-day total of 152 to place 15th and help lead the Tigers to a seventh-place team showing with a score of 654.

"My main goal was to definitely get in the top 25," he said. "I felt like I played really well; it definitely could've been a lot worse. I didn't have any deeper goals, I just wanted to go out and play like I usually do, and it worked out for me."

Riverdale finished sixth out of the eight teams that advanced to Saturday, tallying 645 strokes. Senior James Moorhusen led the Rams with a two-day total of 157, finishing in 30th place.

"I thought it was special for our guys to get to go back and experience this again," said Riverdale coach Trent Groves. "Playing at state is a special accomplishment that a lot of high school golfers don't get to experience."

1A girls: At the 1A girls' state golf meet in Decatur, Geneseo senior Keely Nguyen brought her prep career to a close by shooting an 83 for a two-day total of 169. The area's lone representative at Red Tail Run finished inside the top 50 with a 47th-place showing.

Drew Hall receives a hug fit for a champion from his dad and coach Darren Hall at the Illinois Class 1A state golf finals awards ceremony on Saturday in Bloomington. Hall's 2-over par 74 Saturday helped propel him to the Class 1A state title.

Sherrard's Brennan Welch pumps his fist after making his final putt at the Illinois Class 1A state golf finals on Saturday.