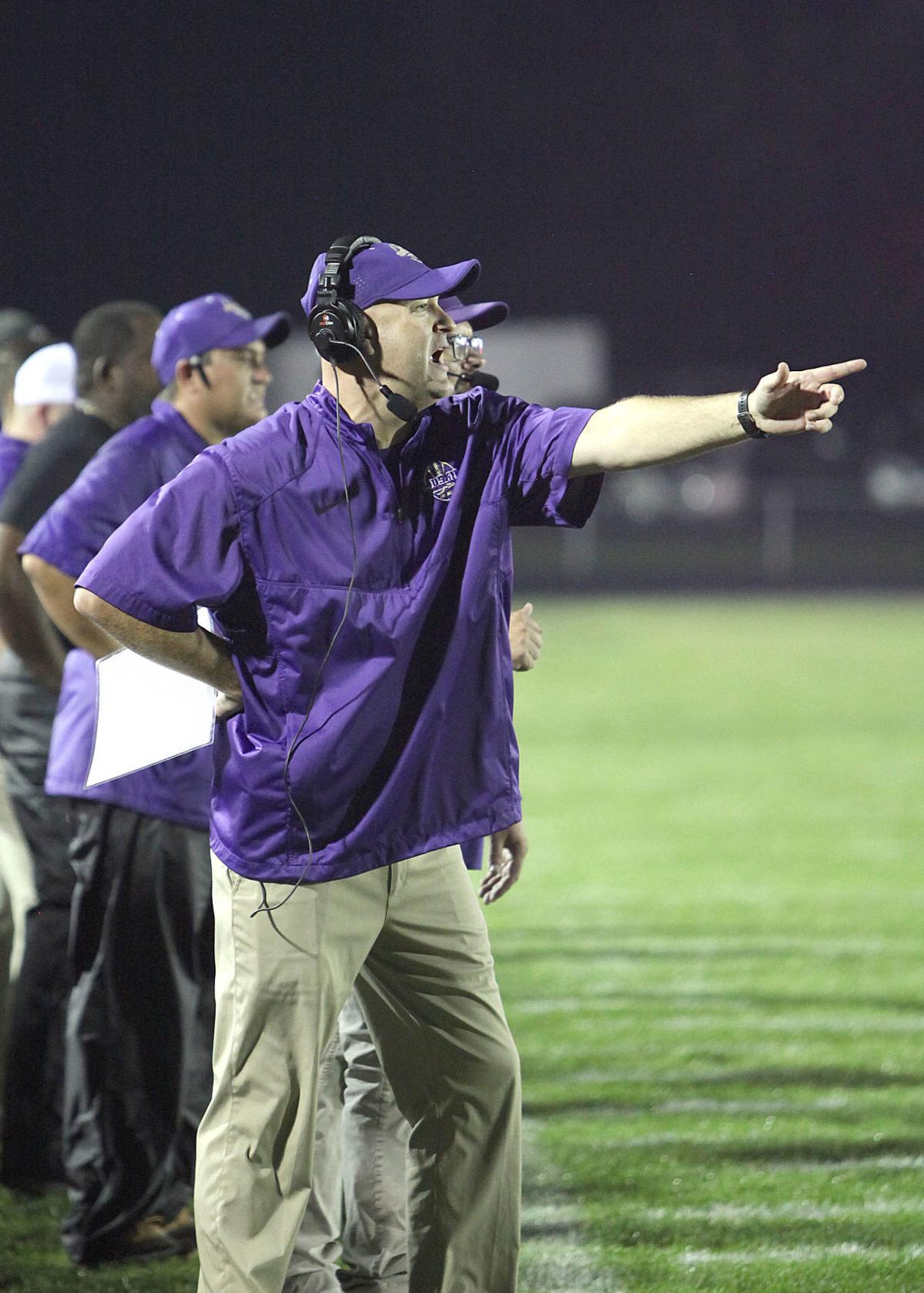 Muscatine football coach Jake Mueller gives directions to his team during their Week 5 game at Iowa City High this past season. Mueller announced his resignation as head coach Saturday, deciding to return home to Cedar Falls. 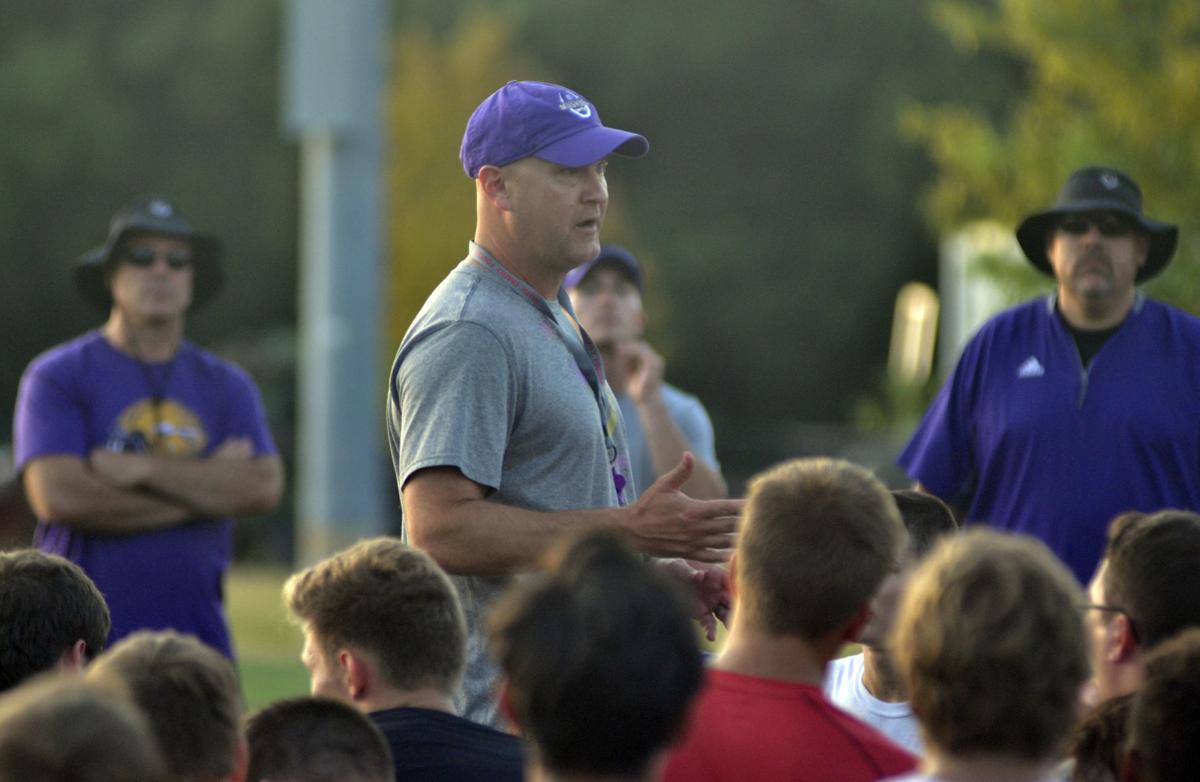 Muscatine head coach Jake Mueller addresses his team after the conclusion of day one of the Muskie Football Camp prior to the 2019 season. 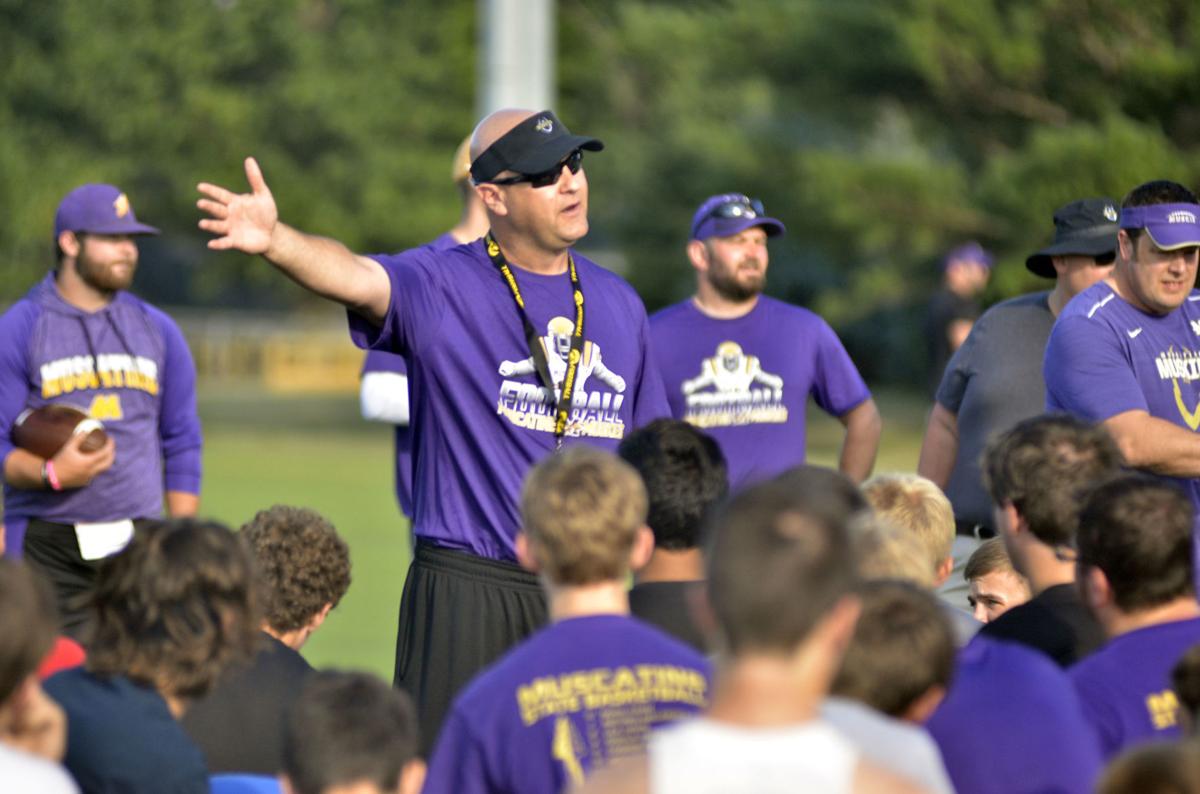 Muscatine football coach Jake Mueller addresses players during the first day of camp prior to the 2019 season.

The call to go back home was too loud for Jake Mueller to ignore.

Mueller announced his resignation as Muscatine's head football coach on Saturday as he has accepted a counselor's position at Cedar Falls, his alma mater. He has been with the Muscatine football program for the past 15 years, 10 as the head coach.

Over that span, the Muskies were 49-48. But a couple losing seasons skewed that mark, as Muscatine finished .500 or better in eight of the 10 seasons Mueller was at the helm.

"After days of prayer, tears and very mixed emotions, I am announcing that I will no longer be the head football coach of the Muskies," Mueller wrote in a statement posted on social media.

"The community support in Muscatine is unmatched," he said. "Muscatine will always have a special place in my heart.

"Words can't describe the love and admiration I have for the players I've had the privilege and honor coaching ... I would like to thank all the parents and guardians we've had over the years for your loyalty and support ... The culture of the program is strong."

Mueller led the Muskies to the Class 4A playoffs six times.

Coincidentally, his first two playoff appearances ended in losses to Cedar Falls, where he and his family now head.

"We wouldn't leave for just anywhere," Mueller said. "We love the people we work with. We love our house and neighborhood. I love my players and coaches in our program.

"A lot of things (had) to line up for us to make the jump. Many of those things did."

As a coach, teacher and member of the Muscatine community, Mueller leaves a lasting impression.

"Jake's leadership has built a program that produces not only quality athletes and teams, but great young men," said Mark Rusch, assistant football coach and head boys track and field coach. "Returning to Cedar Falls is a great opportunity for him and his family and he will continue to have a great impact on the lives of kids."

Within the Muscatine athletic program, Mueller played an integral role in hiring many staff members.

"As fate would have have it, I was an assistant freshman football coach at Holmes Junior High in Cedar Falls for three years while I attended UNI," Rusch said, "and Jake was a player on one of those teams. When I came to Muscatine five years ago, things came full circle when he hired me as an assistant coach on his staff."

"As far as working with (Mueller), he's just a great guy," Muscatine assistant football coach and head baseball coach Grant Pippert said. "He was on the interview group that interviewed me when I got hired. Having Jake here with an established football program was definitely a pull factor for me coming to Muscatine."

Mueller is expected to be on the football staff at Cedar Falls. He just doesn't know in what capacity yet.

His decision leaves the Muskies with no choice but to look ahead in terms of a replacement.

"Over the last 15 years, Jake Mueller had a huge impact on Muscatine High School and Muskie football," activities director Tom Ulses said. "Coach Mueller poured his heart and soul into helping our players develop as men, not just football players.

"It is never easy to hire a new head football coach, and we will consider all options as we execute our search for our next head coach ... We want to make sure that we find the right fit for our players, program and school."

MAQUOKETA, Iowa — There is a moment that still rings clear with Kevin Bowman.

Offensive line is 'the glue' of Assumption's football team

They are big and tall. They are agile. They are experienced. They are talented.

Showing what they have: ‘Combine’ helps Rocky players in recruiting process

In Iowa, high school football players are playing games right now, getting a chance to show what they can do on the field for any college scou…

A sooner-than-expected football season won’t be happening, but Illinois high school athletes will have additional competitive opportunities in…

Bralee Trice admitted that playing Division I college basketball had been a dream of hers since she was a little girl.

Unbeaten Pleasant Valley found its fourth victory of the season to be a collaborative effort.

Athletes of the week

Muscatine football coach Jake Mueller gives directions to his team during their Week 5 game at Iowa City High this past season. Mueller announced his resignation as head coach Saturday, deciding to return home to Cedar Falls.

Muscatine head coach Jake Mueller addresses his team after the conclusion of day one of the Muskie Football Camp prior to the 2019 season.

Muscatine football coach Jake Mueller addresses players during the first day of camp prior to the 2019 season.