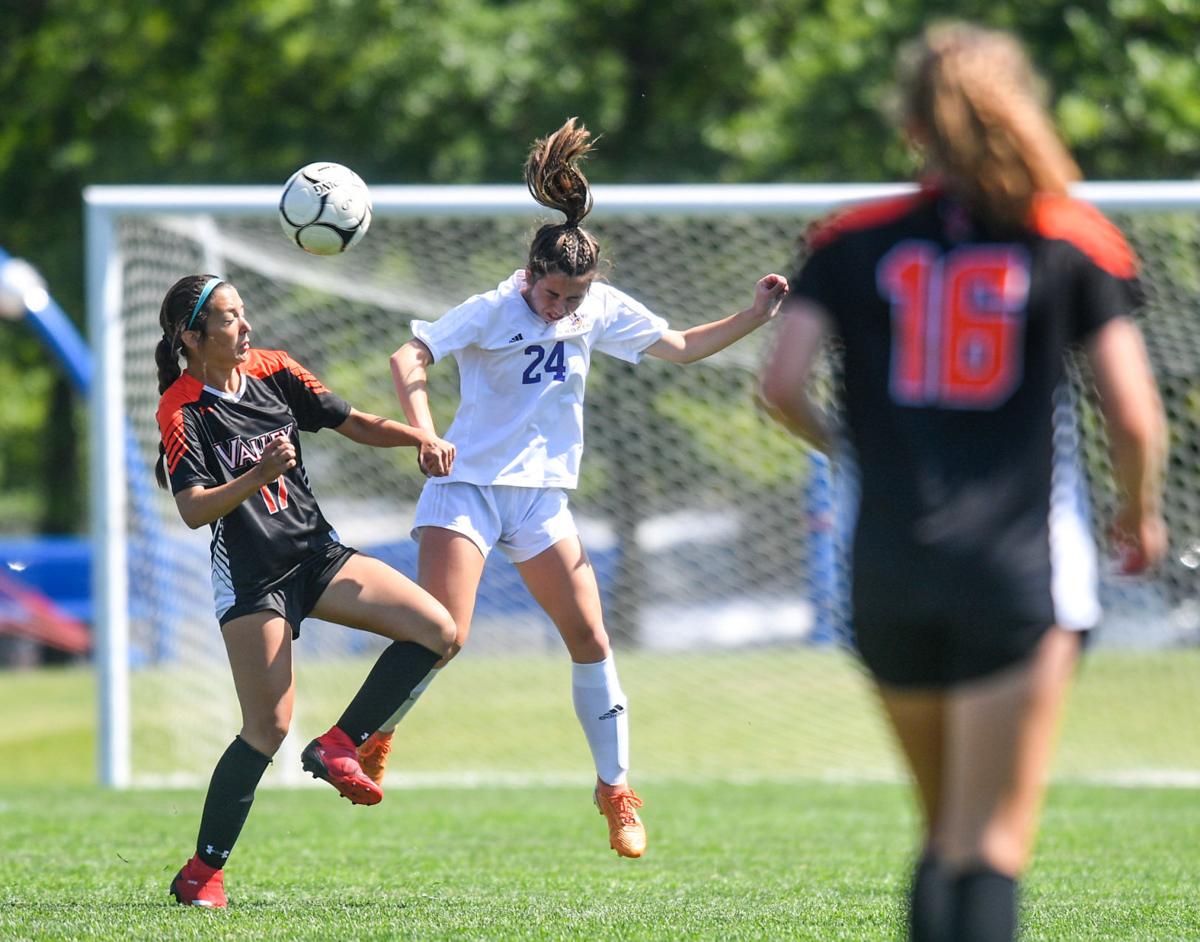 West Des Moines Valley's RyLee King (17) and Muscatine's Tess Santianiello (24) vie for control of the ball during the Class 3A state quarterfinals at Cownie Soccer Complex in Des Moines on Tuesday. 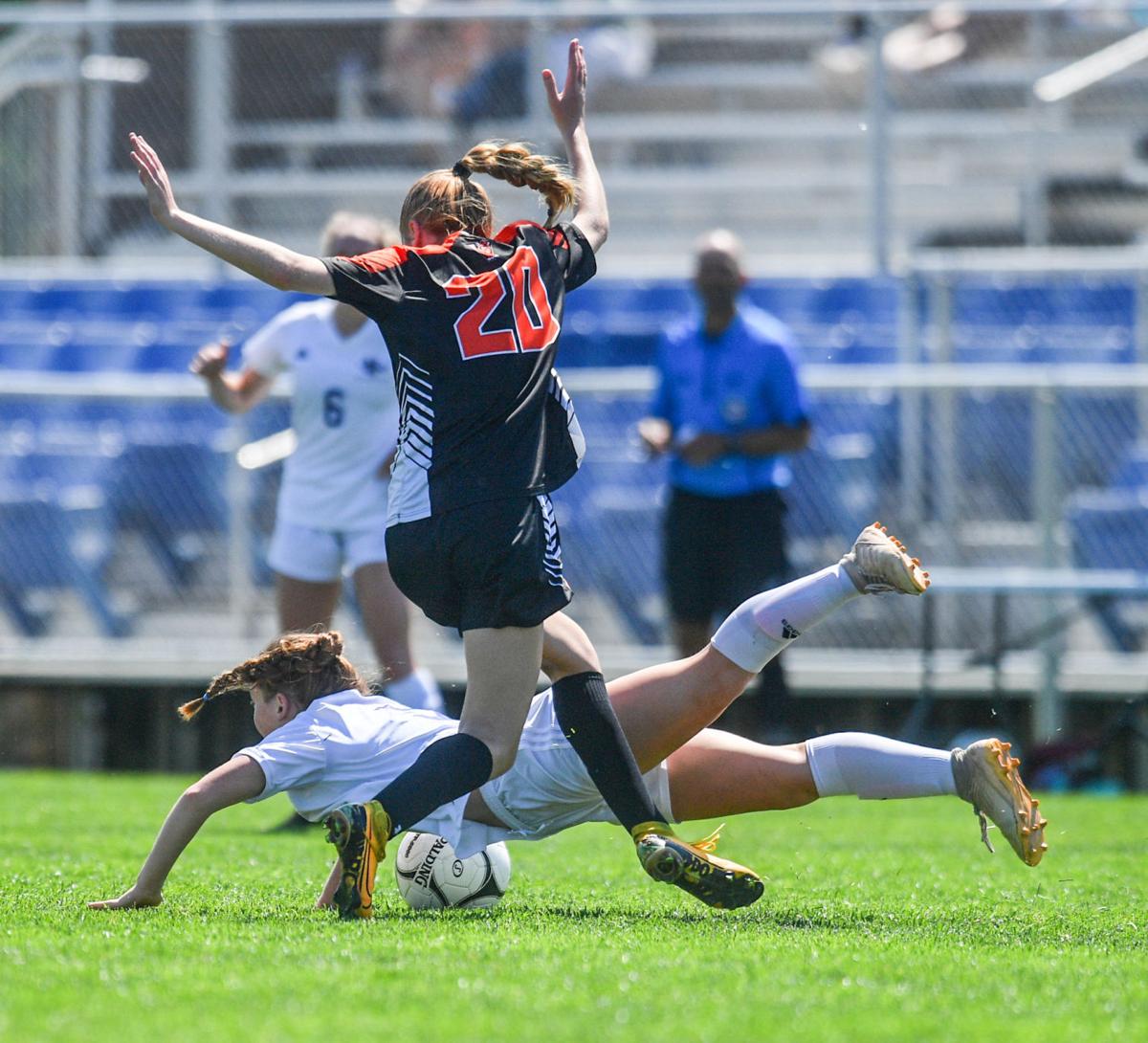 DES MOINES — For a minute, Muscatine looked to be mounting a comeback in its Class 3A state quarterfinal match against West Des Moines Valley Tuesday.

But almost as soon as the Muskies pulled themselves back in it, the team found itself down multiple goals again.

Muscatine, the eight seed, couldn’t recover, and Valley would tack on two more goals to ride past the Muskies on Tuesday, 5-1, at Cownie Soccer Complex in Des Moines.

It was the Muskies' first appearance at state in 14 years.

After the top-seeded Tigers took a 2-0 lead into halftime, Muscatine’s Kaitlyn Holmes opened the Muskie scoring in the 59th minute when the sophomore knocked the ball into the back of the net in a very crowded box in front of the Valley goal after a Lanie Weikert corner kick for the Muskies.

But Valley not only closed out the Muscatine scoring there but countered with a goal within a minute, pushing the lead back to two at 3-1 as the game pushed past the midway point of the second half.

“We told them (at halftime) that 2-0 games are the hardest to win and it’s the easiest game to lose (for the team ahead),” Muscatine head coach Austin Kinsey said. “I think they took that to heart, after halftime, I thought we had some momentum, but that got shut down sooner than I would have liked.”

“It sucks to come up short,” said Kinsey. “But there are some very good teams here in Des Moines, and we are one of them."

The Tigers got two goals from junior Anna Van Wyngarden, including the quick answer to Holmes' score, bringing her season total to 27.

Van Wyngarden followed that goal up with her second shortly thereafter, in the 61st minute, further disheartening the Muskies as the game grew further and further out of reach.

The loss of Meredith Connor to an injury in the first half also left the Muskies without one of their best playmakers and scorers as Connor amassed 19 goals and 13 assists this season.

Emma Byrne recorded three assists for the Tigers. The senior helped on both Van Wyngarden scores, as well as the game’s opening goal, which came in the 10th minute by Jaci Loecke.

Muscatine (15-4) was able to find some degree of success in the middle portion of the first half, but Valley would strike again in the 31st minute when Loecke found Grace Olson in the box for a score.

Grace Wolford scored the game’s final goal in the 67th minute off of an Emma Becker assist.

“We lost coverage now and again,” said Kinsey. “But a good team will make you do that, if you give them an inch, they’ll take a yard. That’s what Valley did.”

Muscatine will look to be back in Des Moines next season, but it would be with a different head coach.

Kinsey, who took over as head coach 10 games into the season, had already been planning a move before leading Muscatine to state.

Muscatine was in the race for a Mississippi Athletic Conference title until the last game of the regular season when a loss dropped them to third behind Pleasant Valley and Bettendorf.

The team does boast an impressive lineup of players who figure to be back, however.

Along with Holmes and Connor, who was second team all-MAC, the Muskies will bring back leading goal scorer Mya Jansen, who had 20 goals and six assists, and Sophia Thomas (19 goals, 10 assists).

Jansen and Thomas were first team all-conference, and Grace Bode joined Connor on the second team. Bode, a junior, was the key figure in Muscatine’s back line all season.

Weikert is also set to return. She came on more as the season went along as a sophomore, finishing with 10 goals and 13 assists as well as being instrumental in a few Muskie late-season wins.

“The girls that are returning, as well as the freshman and sophomore class and even eighth-graders coming in can look at this now and say that (state) is the expectation for this program,” said Kinsey. “And I think (Muscatine) will be back, for sure.

“It was a really, really good season to be (with this team). I tried to make a difference for a team that needed someone to step up and take it. I was proud and happy to do that.”

West Des Moines Valley's RyLee King (17) and Muscatine's Tess Santianiello (24) vie for control of the ball during the Class 3A state quarterfinals at Cownie Soccer Complex in Des Moines on Tuesday.