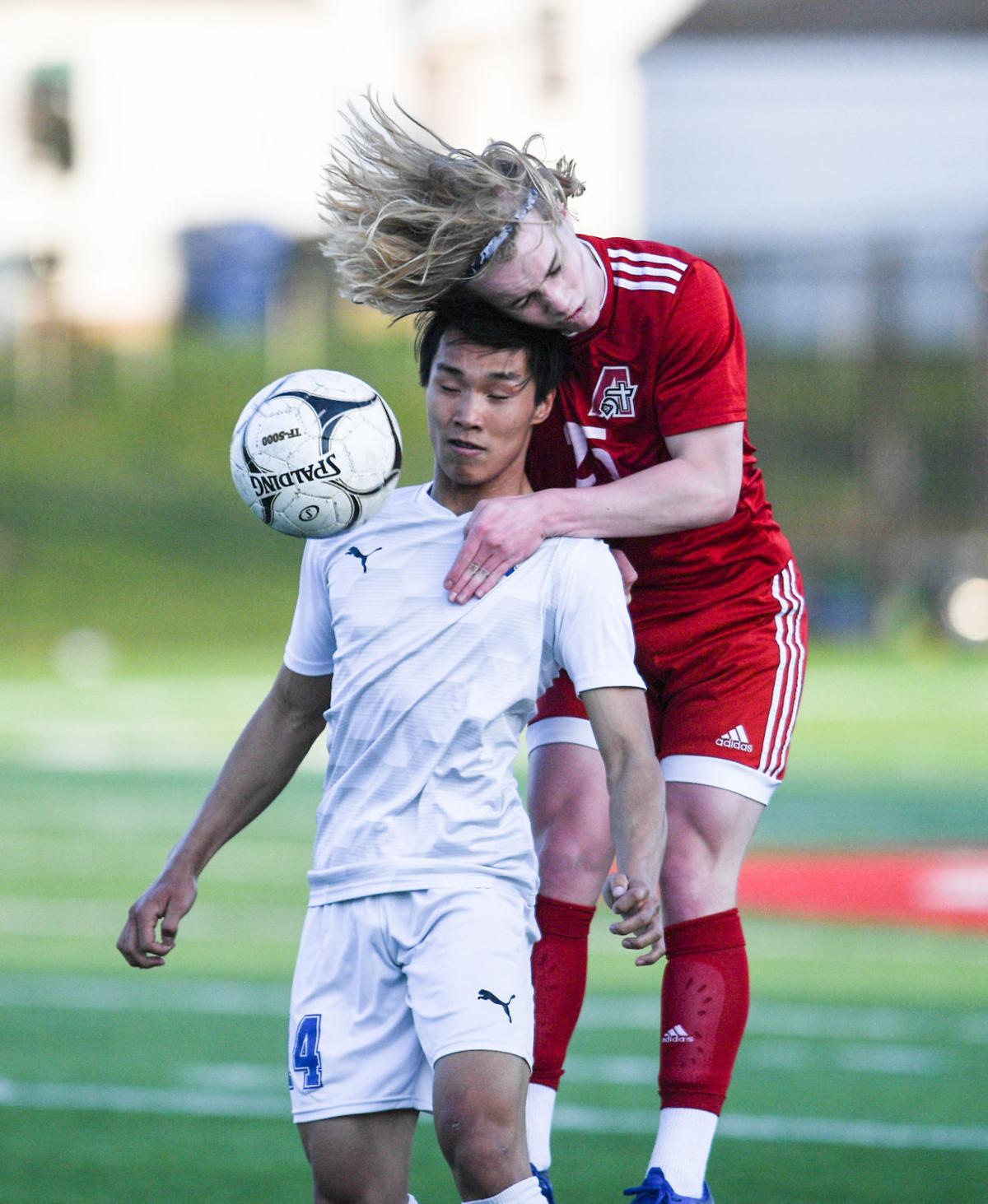 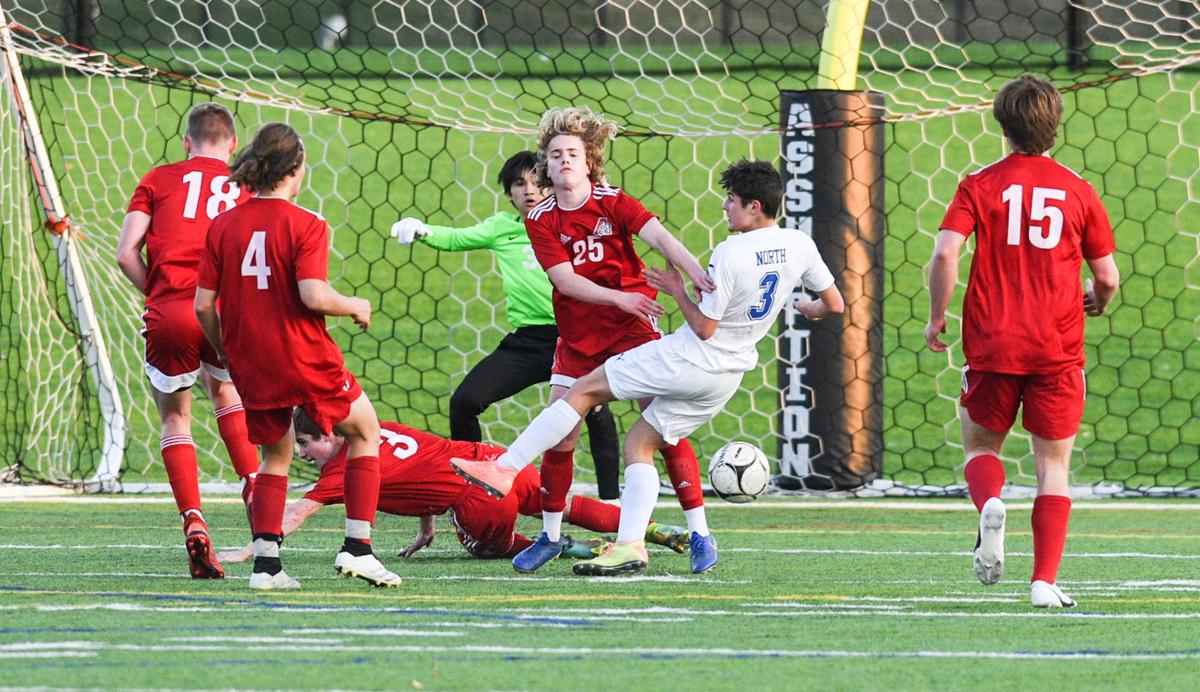 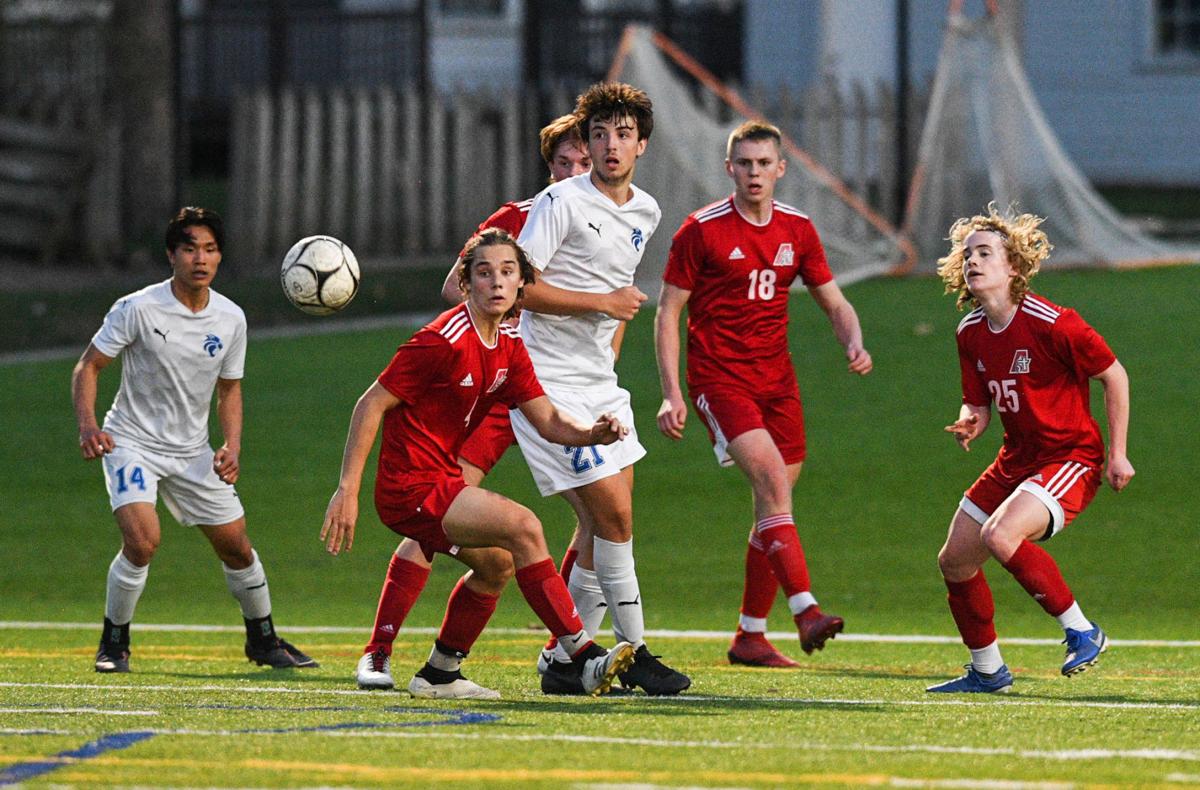 Davenport North's Peter Phan (14) and George Rucker (21) along with Assumption's Sam Burkhart (4), Luke Klostermann (18), and Charlie Leinart (25) all fight for control of the ball during Monday's Mississippi Athletic Conference battle at the St. Vincent Athletic Complex in Davenport.

With intensity and hustle on both sides, 100 minutes was not enough to settle the Mississippi Athletic Conference opener for both teams as the contest headed to a penalty shootout after being tied at 2-2.

With the kicks knotted at 4-4, Assumption goalie Matt Tallman was able to stop North’s final attempt with a save to seal a 5-4 shootout win and an overall 3-2 victory.

Tallman said the intensity of the match was a combination of the game being a city rival ... and something else.

To say both teams left everything out on the field might be an understatement as the action went back-and-forth the entire way with numerous runs from the midfield to the penalty box. Every 50-50 ball was hotly contested as was any kind of offensive run into the penalty area. All of the regulation goals, except for a penalty kick, came from a distance of at least 25 yards out.

The game also saw stoppages from players cramping up, hard fouls that drew yellow cards and some injuries that had to be tended to.

“It was a fun game, it was a challenging game and it was physical,” Tallman said. “But that’s what you get when you get two teams that really want to win.”

Assumption got on the board in the fourth minute when sophomore Roberto Medrano scored on what appeared to actually been a centering pass from the wing. But the ball got caught up in the gusty winds at the St. Vincent Athletic Complex and got over the head of Wildcats keeper Morgan Bequeaith for the score.

The visitors did not take long to answer, however, as Chase Green sent a bouncing free kick from 30 yards out toward Tallman’s right corner of goal. The bounce and momentum of the ball appeared to handcuff Tallman who was not able to get a hold of the moving shot and it slipped in past him to tie the game in the sixth minute.

The Knights moved ahead just before halftime when Liam Nolan scored from 25 yards out after Medrano had won a free kick directly in front of the goal. Nolan’s attempt appeared to sail again with the wind and went over the head of Bequeaith to give the hosts a 2-1 edge.

But the Wildcats came out gunning in the second half, putting six shots on goal in the first 10 minutes of the second half. It eventually paid off in the 50th minute when North (1-1 overall, 0-1 MAC) was awarded a penalty kick for a handball in the box by Assumption (1-1, 1-0).

George Rucker stepped up and beat Tallman to the left corner to tie the game at 2-2. From there, both teams made great runs but also missed some close opportunities.

The teams converted their first four penalty kicks when the Knights’ Sam Burkhart converted his shot by banking in an attempt off the left post to make it 5-4. Tallman said he was not tipped off as to which direction the North player was likely to take.

Tallman slapped down the ground attempt at the right corner which set off a wild celebration on the Knights’ sideline.

“I just guessed,” Tallman said of his save. “But that’s what you have to do sometimes. It feels great to come out and get a win in the conference opener.”

GENESEO — The Maple Leafs boys soccer team knew what was at stake on Thursday night.

It had been 673 days since the players on the Bettendorf girls’ soccer team had played a high school match.

Davenport North's Peter Phan (14) and George Rucker (21) along with Assumption's Sam Burkhart (4), Luke Klostermann (18), and Charlie Leinart (25) all fight for control of the ball during Monday's Mississippi Athletic Conference battle at the St. Vincent Athletic Complex in Davenport.