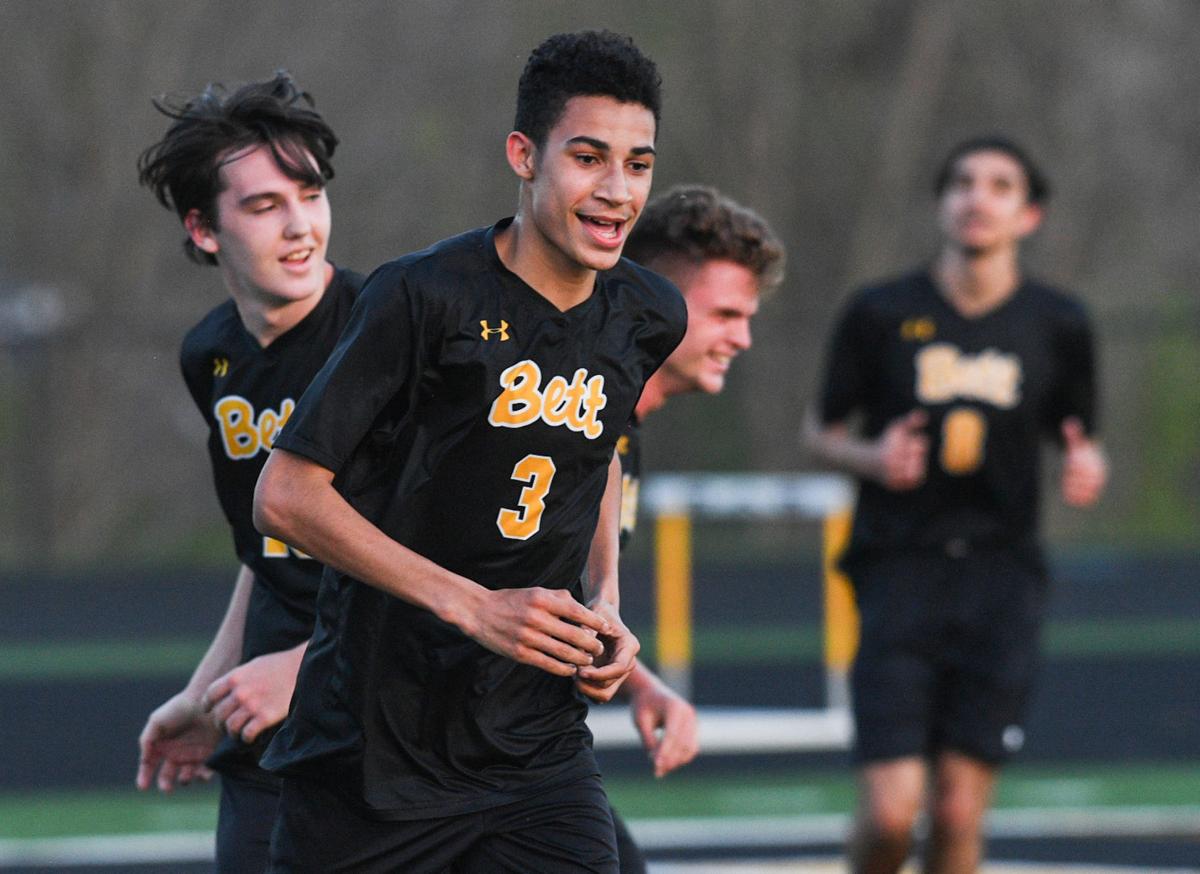 Bettendorf's Noah Shook (3) smiles after a goal against Regina during their match at TouVelle Stadium Monday, April 26, 2021, in Bettendorf. 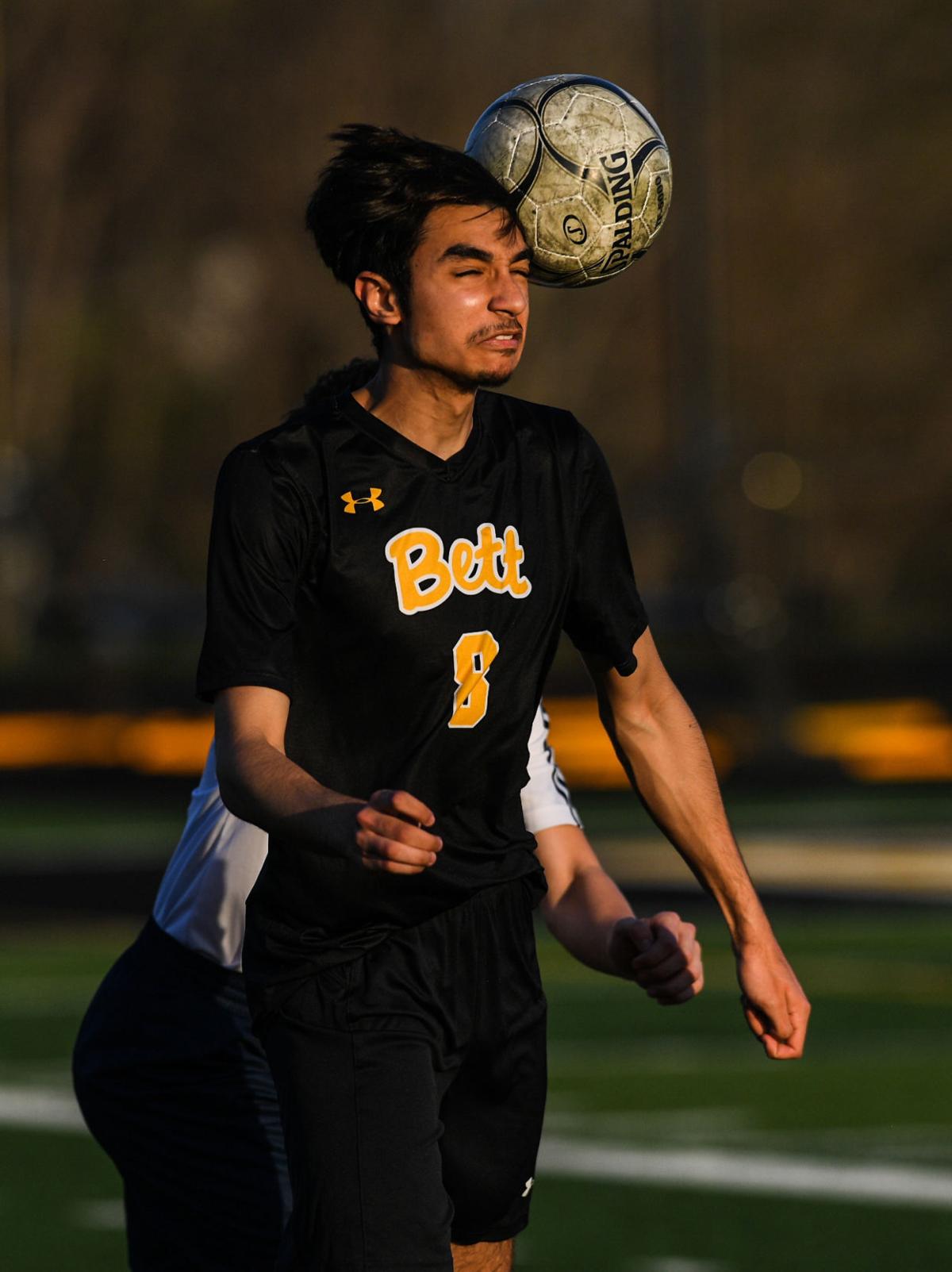 Bettendorf's Mohamed Monkari (8) uses is head to advance the ball in the Bulldogs' 5-0 victory over Iowa City Regina at TouVelle Stadium. 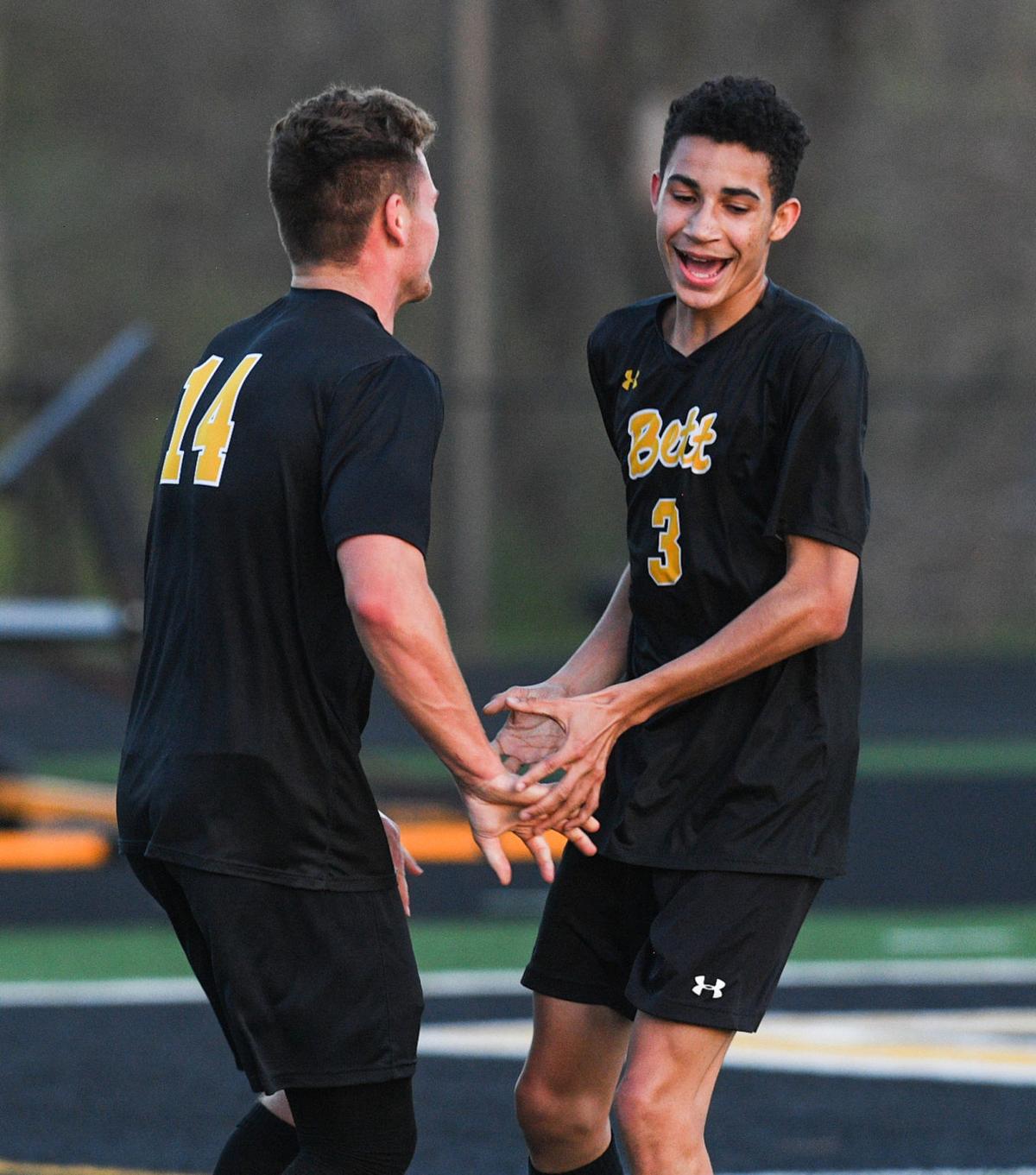 The fastest person on the soccer field at Bettendorf’s TouVelle Stadium on Monday night was not actually a player.

It might have been Bulldogs’ boys head coach Ben Pennington, who was running from his own team, as the players tried to chase down Pennington with a cooler full of water to celebrate.

Eventually, the players caught up to their coach and doused him after Bettendorf had given Pennington his 600th career win with a 5-0 non-conference victory over Iowa City Regina.

The team had snuck the cooler into the back of a group photo to mark the occasion but Pennington got wise as the huddle broke up. Even the Regina players were cheering on the Bulldogs to drench the head coach as Pennington sprinted away from his team at first.

Pennington eventually gave in but may have regretted it after feeling the sting of the cold water. But he said the hugs and handshakes from well-wishers and his players more than made up for it.

“It’s been a great, wonderful journey and I have had tremendous coaches and athletes that have been with me,” Pennington said. “It’s made this very special.”

Pennington has been the only boys soccer coach at Bettendorf, starting the program in 1982 when he arrived. With Monday’s night’s win, the current squad stands at 8-1 overall. Pennington’s record in his 39 years as coach is 600-98-26.

Pennington has averaged more than 15 wins a season and has had only one losing season in that time to go along with three state championships. The boys have only played a state-sanctioned tournament since the mid-1990s.

But he said his assistant coaches, like Chad Uhde, and former players like Tavian Banks are a big part of his success. Uhde was a long-time assistant for Pennington and helped build the Bulldogs program while Pennington said Banks put the program on the map with his success and recognition in the early '90s.

“I have had phenomenal kids, who are multi-sport athletes in the middle of my career and dedicated coaches who were tremendous workers,” he said. “I feel very blessed.”

Pennington added he actually felt bad for last year’s team that he said would have easily pushed him past the 600-win mark if the season was not lost to the pandemic. But he said this year’s team is clicking as the Bulldogs won their fifth game in a row since their only defeat to Pleasant Valley.

“The guys are playing well and are really connecting,” Pennington said.

Junior Tristan Wakefield had two goals and an assist in the Monday night win. Austin Shepherd, Reilly Tabares and Noah Shook also found the back of the net for the winners. Xavier Potts, Mohamed Monkari and Chase Wakefield all had assists for Bettendorf.

Tristan Wakefield said Pennington has a simple formula for getting the most out of his teams. Wakefield was part of the group that was holding the water cooler after the team picture.

“We really weren’t expecting to run after him. We tried to surprise him,” Wakefield said with a laugh. “He brings success to the program because he pushes everyone, every day to be the best. Everyone loves him and we believe he can take us to great things.”

Wakefield added that Pennington is more than a soccer coach and that shone through especially last year when the 2020 season was lost.

“We’re a family and he is just a great person,” he said. “You want to play hard for him every game. You want to win for him.”

Now that he has equaled and will pass the 600-win mark, could 700 wins be that far off?

Bettendorf's Noah Shook (3) smiles after a goal against Regina during their match at TouVelle Stadium Monday, April 26, 2021, in Bettendorf.

Bettendorf's Mohamed Monkari (8) uses is head to advance the ball in the Bulldogs' 5-0 victory over Iowa City Regina at TouVelle Stadium.