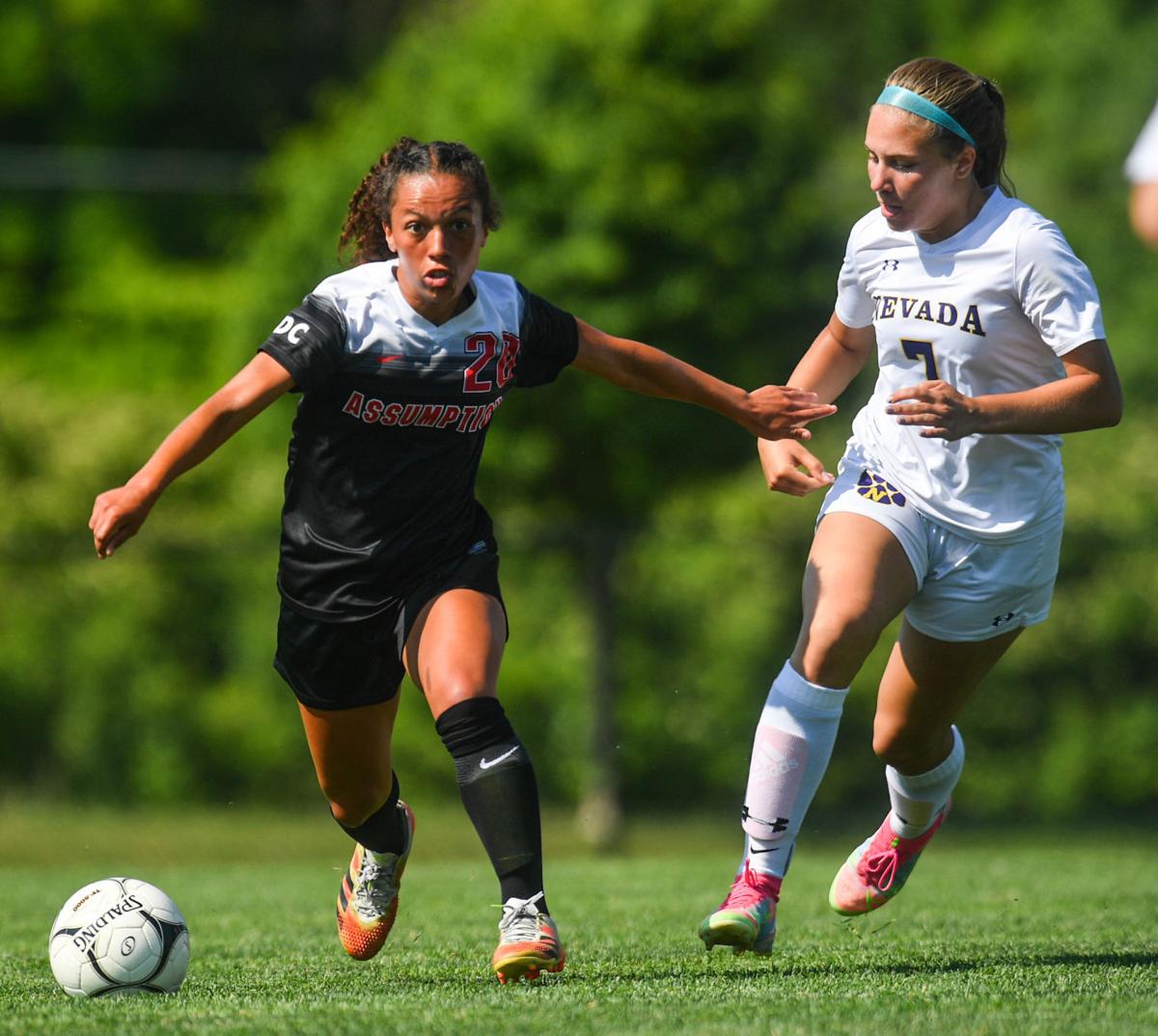 Assumption's Jade Jackson (20) and Nevada's Contessa Borwick (7) battle for control of the ball during the Class 1A state semifinals at the Cownie Soccer Complex in Des Moines on Wednesday. Jackson had four goals in the Knights' 5-1 victory. 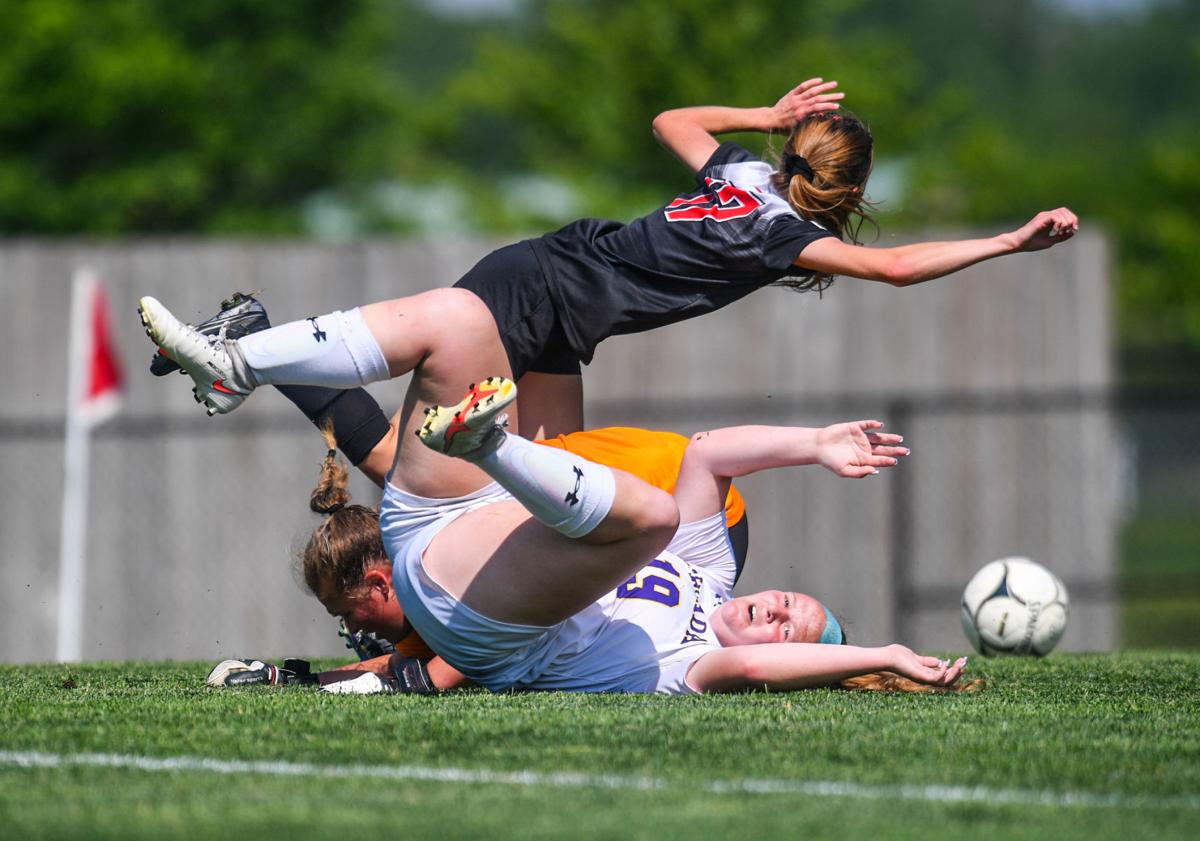 Assumption's Sam Scodeller (17) collides with Nevada keeper Addi Vorm (50) and Aubrey Gibson (19) during the Class 1A state semifinals at the Cownie Soccer Complex in Des Moines on Wednesday. 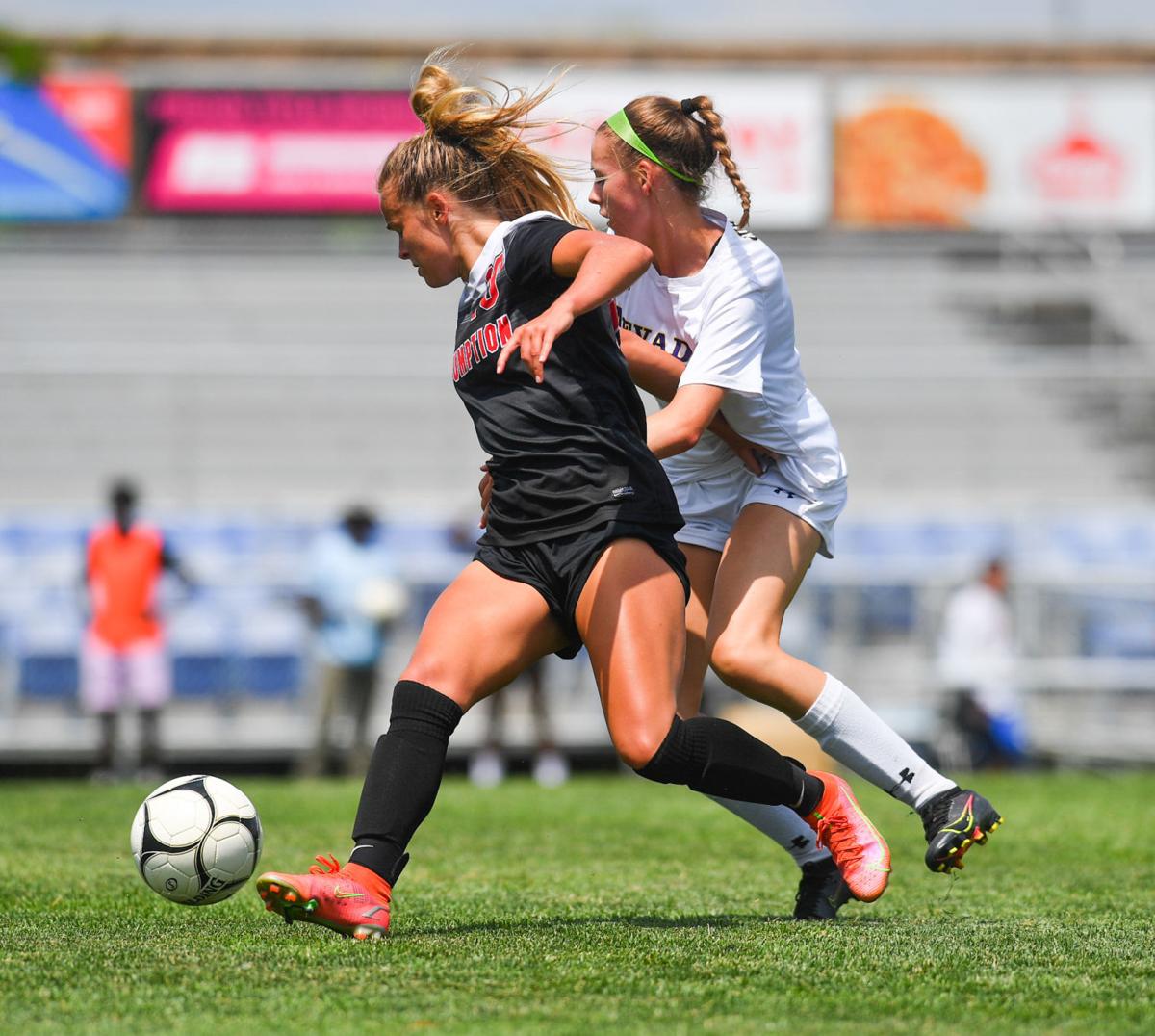 Assumption's Gracen Ruggles (19) tries to fend off Nevada's Mayzi Weig for possession of the ball during the Class 1A state semifinals at the Cownie Soccer Complex in Des Moines on Wednesday.

DES MOINES — One streak came to a halt. The most important one is very much alive.

The Class 1A top-ranked Davenport Assumption girls’ soccer team surrendered a goal for the first time in a dozen postseason matches Wednesday morning.

It was of little consequence as Assumption’s drive for five straight state championships is a step closer to reality following a 5-1 triumph over fourth-ranked Nevada in a state semifinal at the Cownie Soccer Complex.

“To be able to be in that state championship game is the best feeling ever,” junior Jade Jackson said.

“We’ve been looking for this moment ever since we were freshmen,” senior Sam Scodeller said. “It is amazing."

A day after scoring her first career state tournament goal, Jackson tallied four against the Cubs. She scored in the 23rd, 46th, 57th and 66th minutes before coming out of the game for the final 12-plus minutes.

Jackson, who started the season in an attacking midfielder role and then transitioned to forward, has scored a team-high 31 goals this spring.

“(That move) has done some really nice things for us,” Assumption coach Elizabeth Maus said. “She’s a versatile player and we can play her anywhere. When she has the opportunity to get the ball in the open field, she’s one of the best out there.

“It has certainly sparked us in this tournament.”

Jackson had some help.

On Assumption’s first goal, Scodeller collided with a Nevada defender and the keeper at the top of the box. Scodeller, though, was able to get a touch on the ball before the contact and left an open net for Jackson.

Gracen Ruggles played a nice pass into the box for Jackson’s second score.

Then to complete the hat trick, keeper Dawsen Dorsey punched out a Nevada attempt. Aubree Langan delivered a pass to Scodeller and she connected with Jackson on a through ball.

“There are so many people on our team that are great passers, great distributors and I just have to finish what they give me in the box,” Jackson said. “Sam and I do a really good job connecting.”

Jackson has had the finishing touch.

"She reads passes well," Ruggles said. "She has great run through and her touch leading in front is awesome. She's strong up there."

The Knights were more connected and crisper than they were in the quarterfinal win over Sioux City Heelan.

It also didn’t take Assumption as long to get going.

“We were a lot more efficient and effective with our passing today,” Maus said. “I was really happy with the way we came out of the gate and were ready to go. It was a great game for everybody.”

The only blemish was not getting a clean sheet for the 12th straight postseason match.

Nevada’s Contessa Borwick buried a shot from about 40 yards with her left foot in the upper corner in the 60th minute. It was the first goal Assumption had yielded in the postseason since Center Point-Urbana scored in the Knights’ 5-1 win in the 2018 semifinals.

“That was a little bit of a reality check,” Ruggles said.

“It might have been good for us to get that one out of the way,” Maus noted. “We settled in afterward and found our footing again. It is never something you want to have happen, but one was OK today.”

A water stoppage came soon after because of the excessive heat.

“It gave us some time,” Scodeller said. “It was like, ‘We need to chill, we need to breathe, it is OK.’ When we get scored on, we’re not used to it and we can get frazzled and things happen.

“I think we did a good job of keeping our composure.”

Jackson added her last goal about six minutes later and Claire Smith finished the scoring with a goal in the 79th minute.

It added up to another lopsided win for the Knights, who have outscored teams 43-1 in this postseason.

Assumption has just one obstacle left to join Cedar Rapids Xavier as the only other program in state history with five consecutive state championships.

“It is going to take all we’ve got,” Scodeller said. “We have the potential to do it. We just need to come to play and we will.”

Assumption's Jade Jackson (20) and Nevada's Contessa Borwick (7) battle for control of the ball during the Class 1A state semifinals at the Cownie Soccer Complex in Des Moines on Wednesday. Jackson had four goals in the Knights' 5-1 victory.

Assumption's Sam Scodeller (17) collides with Nevada keeper Addi Vorm (50) and Aubrey Gibson (19) during the Class 1A state semifinals at the Cownie Soccer Complex in Des Moines on Wednesday.

Assumption's Gracen Ruggles (19) tries to fend off Nevada's Mayzi Weig for possession of the ball during the Class 1A state semifinals at the Cownie Soccer Complex in Des Moines on Wednesday.