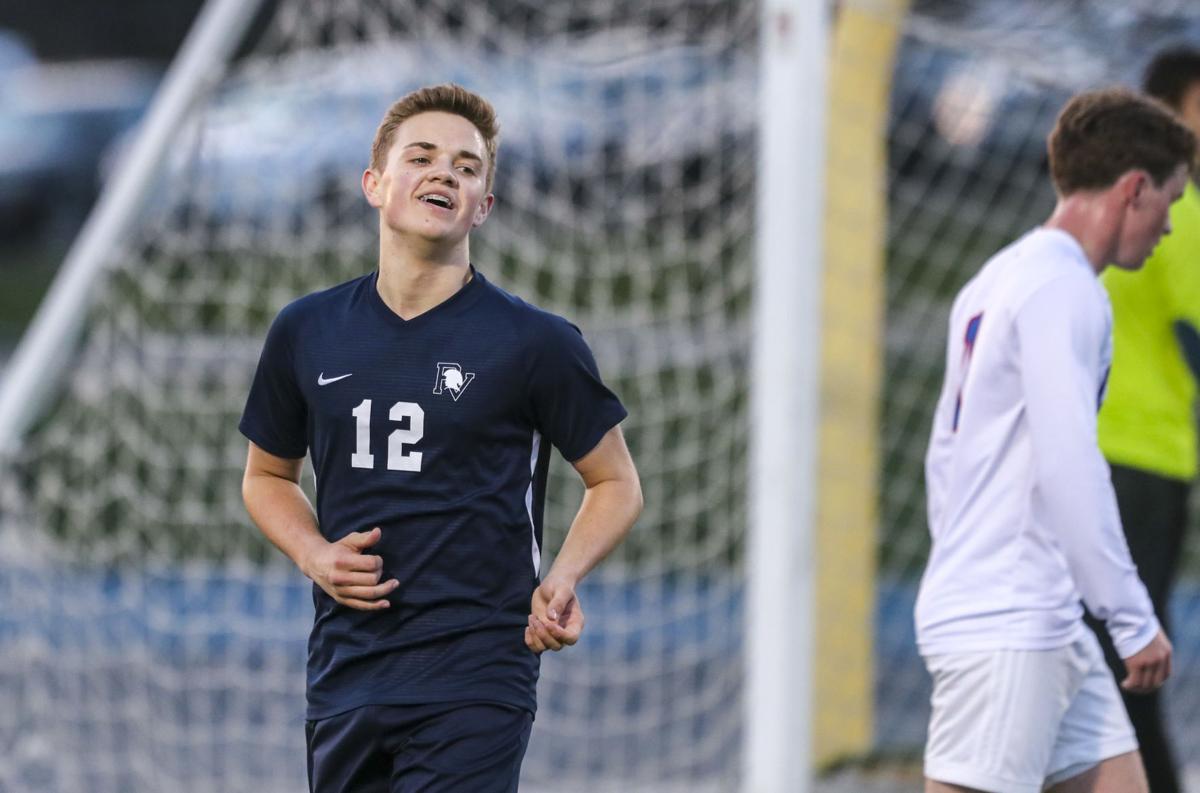 Pleasant Valley's Bryce Rubel (12) celebrates after scoring a goal in a match two seasons ago. Rubel is one of four Spartans returning with extensive varsity experience from the 2019 season. 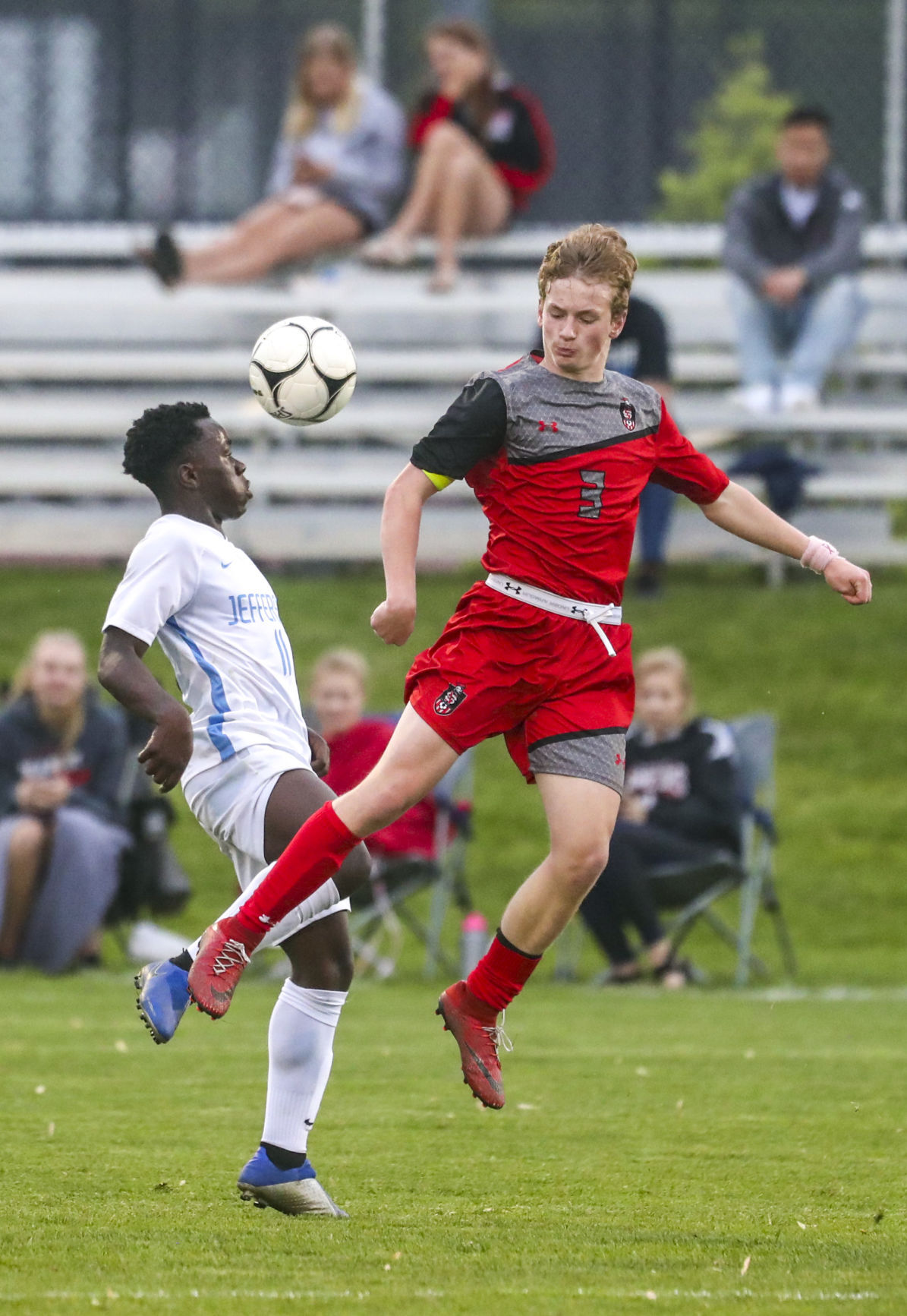 North Scott's Chase Porter (3) tries to intercept the ball from Cedar Rapids Jefferson's Paul Mwilarhe (11) during the second half of their game at The Pitch in Eldridge two years ago. Porter, a center midfielder, is back with the Lancers this spring.

Here is a look at five things to watch heading into the season:

What's in store for PV?

With no season transpiring last year because of COVID-19, Pleasant Valley is the reigning conference champions. Coach Wayne Ward's team went through the league unscathed in 2019 and didn't allow a goal in any of its nine MAC matches.

The Spartans' 15-2 season ended in the substate final against rival Bettendorf.

Ward and Rubel combined for 16 goals and six assists as freshmen.

The rest of PV's starting unit will be relatively new to the varsity level.

"The sooner we get comfortable with the speed and expectations of varsity soccer, the quicker we can be successful," coach Ward said. "Finding a system and a team identity is key."

Coming off a .500 season in 2019, North Scott head coach Troy Bendickson said his squad has one of its largest senior classes ever and eight underclassmen who are ready to contribute.

In particular, the Lancers are veteran in the middle with center midfielders Chase Porter and Logan Cole, center defender Baylor Verbrugge and keeper Kade Tippet. Porter had five goals and five assists as a sophomore while senior forward Alex Perez tallied four goals two years ago.

Bendickson is excited about the development of his underclassmen as well. Sophomore outside midfielder Liam Regan is expected to have a prominent role.

"With our senior leadership, technical ability and high soccer IQ, this group has both the tangibles and intangibles," Bendickson said. "We are as deep as we have ever been, so even if we aren't 100% healthy, we have players who can step in. It creates high expectations for our season."

Bulldogs try to piece it together

As Ben Pennington begins his 39th season as Bettendorf's head coach, he will try and blend four grade levels together on his varsity squad.

The Bulldogs, coming off a state semifinal appearance in 2019, have six seniors, two juniors, two sophomores and a pair of freshmen expected to see extended playing time.

Pennington has five players from Rivermont Collegiate and three from Morning Star Academy on his roster. The Bulldogs have individuals from Morocco, Congo and Germany.

"It gives me a chance to brush up on my original language," Pennington said.

Of the 54 goals Bettendorf scored in 2019, only three return in junior Tristan Wakefield (two) and senior Reilly Tabares (one).

"We want to continue the Bettendorf tradition of competing at a high level," Pennington said. "I like the leadership I have seen and how all the players are supporting each other. It is a very coachable group."

During a 13-win season in 2019, Davenport North had four freshmen score multiple goals. Among those was Chase Green, who led the team in points with seven goals and 15 assists.

That experience puts the Wildcats in a favorable position heading into this spring with those freshmen now juniors.

With Green, a midfielder, and forwards George Rucker and Peter Phan, coach David Gamble figures to have a team which can be in the upper tier of the MAC. North also brings back defenders Isaac Griffith, Ben Roberts and Yovani Morales.

North opened the season last Thursday with a 7-2 win over Clinton Prince of Peace. Rucker had four goals and two assists in that match.

"(The key) is getting the athletes to learn how to play as a single unit," Gamble said. "Not playing soccer with each other over years and years, it forces us to learn each others tendencies and movements in just a short few weeks.

"Getting everyone's touch and passing to a competitive level will be a challenge since many of the returning players haven't touched a ball in over 600 days because they were in other sports."

Central DeWitt begins its first season of play in the MAC. After seven consecutive winning seasons, including multiple trips to the state tournament, the Sabers were 6-10 in 2019.

First-year coach Jon Keith will attempt to get the program back on track.

The Sabers will lean on a large senior class, led by center midfielder Cody Penniston (seven goals as a sophomore).

"This group is very motivated to be successful this spring, especially with everything that comes with joining a new conference that is one of the best in the state in regards to boys soccer," Keith said. "Our expectation is to compete and show that we belong in this talented conference.

"Our team will go as far as our seniors are willing to take us. They have a lot of experience and leadership that will be crucial in our opportunity to be successful this season."

Midfielders are the heart, brain and lungs of a soccer team. They are crucial to having a smooth transition from defense to offense and establ…

Davenport North’s Bella Steiner said she was in the right place at the right time.

Although it was a non-conference game, the Moline boys soccer team wanted to make a statement on senior night at the Soccer Bowl.

Chad Hollmer admits that he is flying a little blind into his next coaching opportunity.

Sophia Thomas provided the punch when Muscatine needed it most.

Sophia Thomas provided the punch when Muscatine needed it most.

Pleasant Valley's Bryce Rubel (12) celebrates after scoring a goal in a match two seasons ago. Rubel is one of four Spartans returning with extensive varsity experience from the 2019 season.

North Scott's Chase Porter (3) tries to intercept the ball from Cedar Rapids Jefferson's Paul Mwilarhe (11) during the second half of their game at The Pitch in Eldridge two years ago. Porter, a center midfielder, is back with the Lancers this spring.