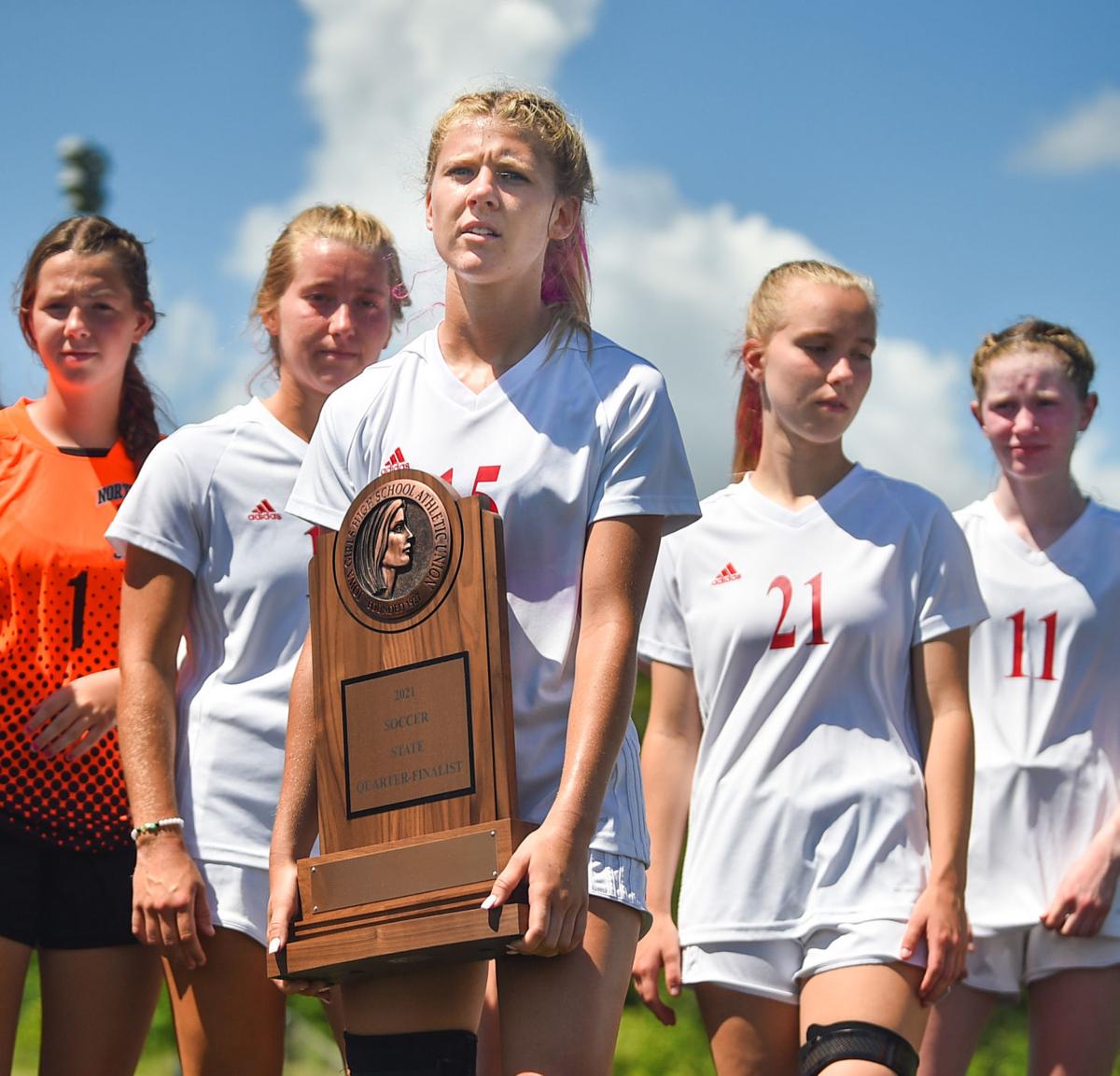 North Scott's Faith Rains (15) holds the state participation trophy after the Lancers lost to Norwalk 3-2 during the Class 2A state quarterfinals at the Cownie Soccer Complex in Des Moines on Tuesday. 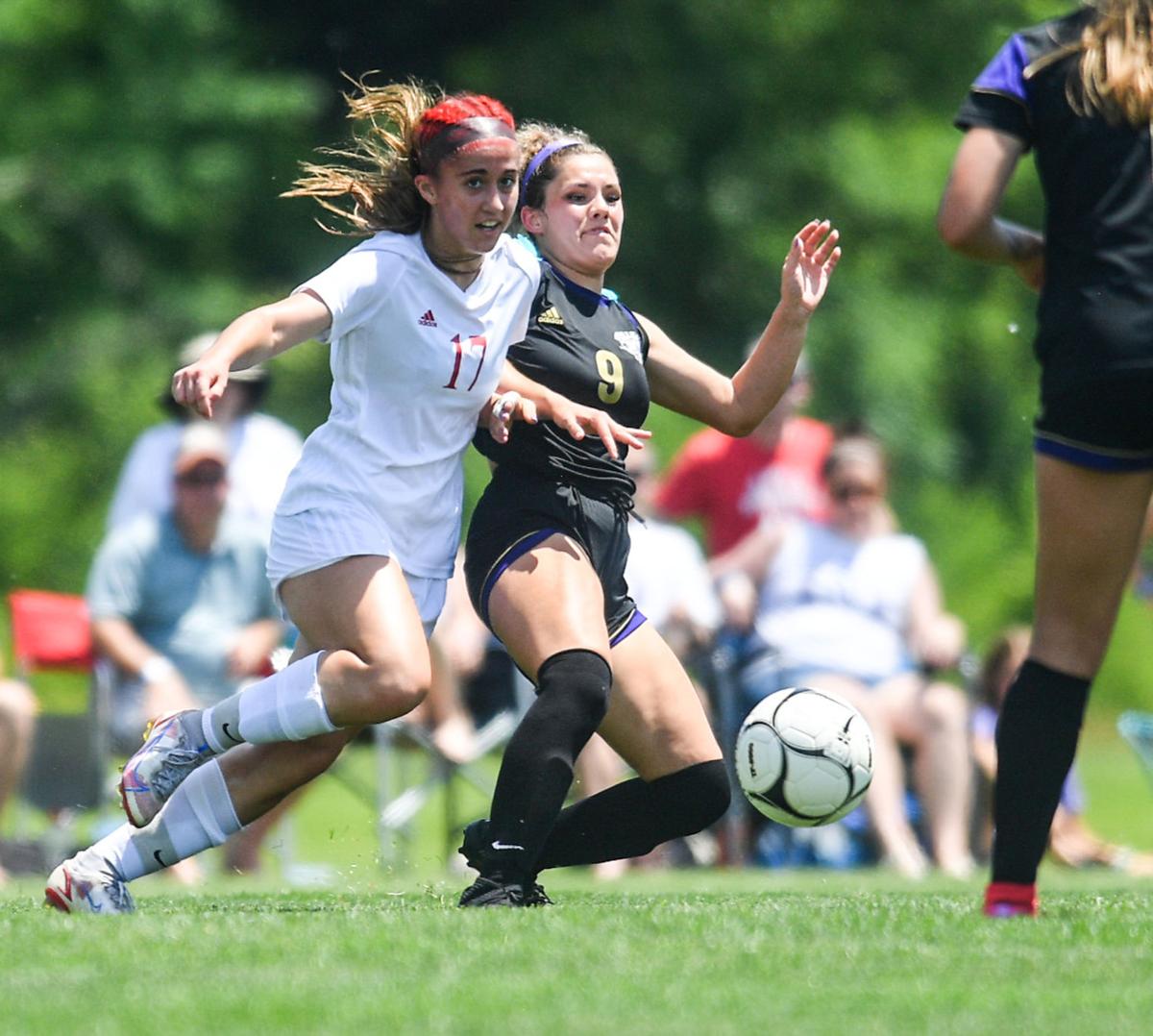 North Scott's Kendall Knisley (17) and Norwalk's Serenity Madonia (9) battle for control of the ball during the Class 2A state quarterfinals Tuesday afternoon at the Cownie Soccer Complex in Des Moines. Knisley had a goal and an assist in the match. 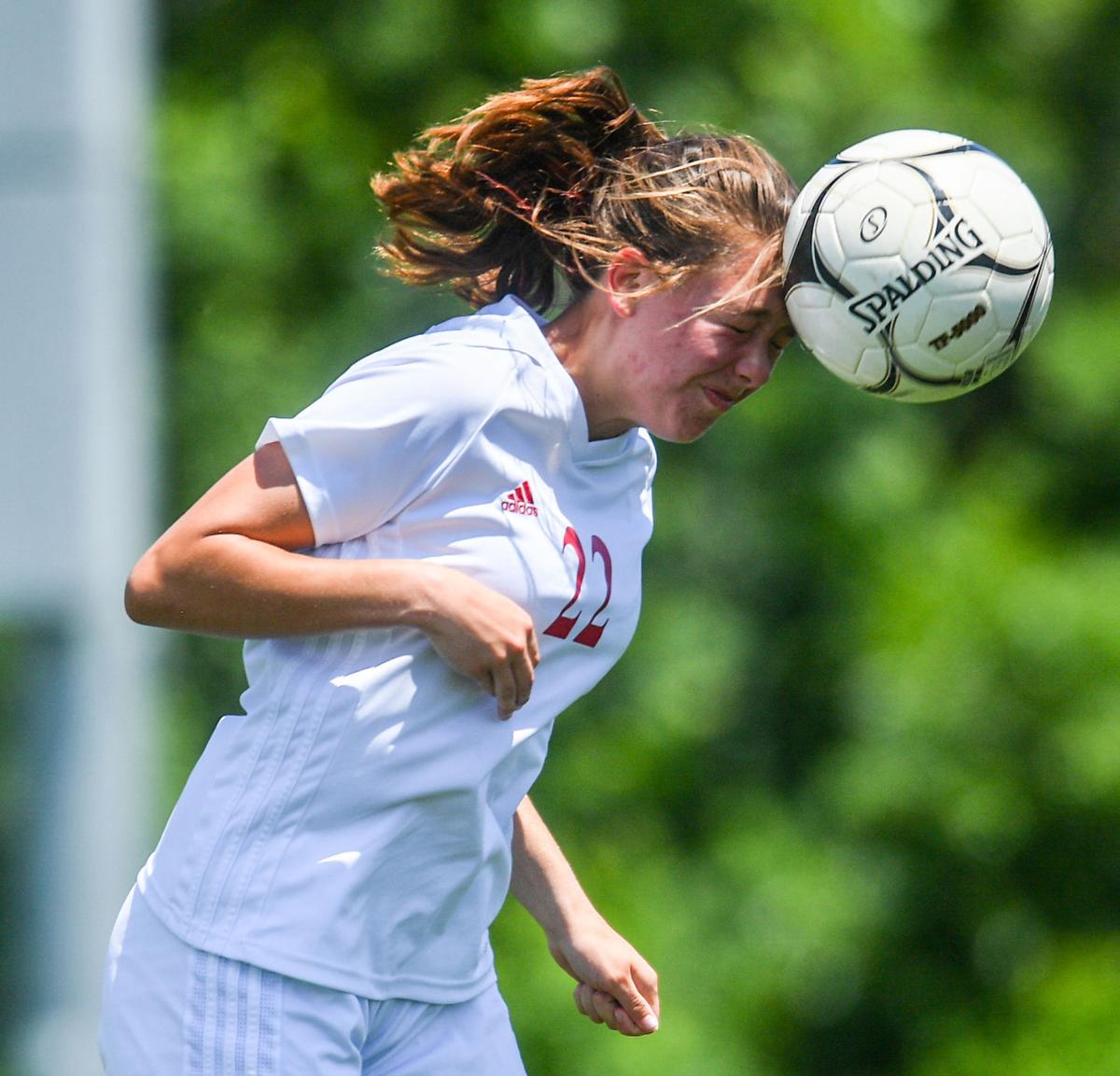 North Scott's Lexi Ward (22) heads the ball during Tuesday's match against Norwalk at the Class 2A state tournament.

“We put our heads down, which is unfortunate,” North Scott sophomore Kendall Knisley said.

After a back-and-forth tussle, Jojo Bice scored on a free kick from just outside the 18-yard box in the 58th minute to propel third-ranked Norwalk past sixth-ranked North Scott 3-2 in a Class 2A state quarterfinal at the Cownie Soccer Complex.

Norwalk controlled possession and had more than twice the shots North Scott did, but coach Dion Ayers’ team hung in there. The Warriors (16-2) scored all three of their goals on shots that went over the head of the Lancer keeper.

“Our weakness all year has been the high ball,” Ayers said, “but I haven’t seen a team that has five or six girls that can hit a shot from any angle and put it within a foot of the bar. It was insane.

“Those kind of shots just crush you. It is nothing on our keeper. It is a big frame to cover.”

North Scott (13-6) had moments of brilliance.

Trailing 1-0, Knisley was tripped up in the box by Norwalk’s keeper. She drew a foul and converted the penalty kick to even the match.

It remained tied until the early stages of the second half. The Warriors’ Anna Larson lofted a kick from about 30 yards that just went over the outstretched arms of North Scott’s keeper.

The Lancers responded again. Knisley chipped a ball over a Norwalk defender into the box to the feet of Reese Hilsenback. The freshman kicked it into the the net to square the match.

Less than two minutes later, Norwalk drew a foul outside the box. Bice, from the left side of the field, unleashed a free kick from just inside 25 yards into the top corner of the goal.

North Scott had some chances for an equalizer, including shots from Knisley in the 73rd minute and Hattie Hagedorn in the 77th minute, but couldn’t capitalize.

“We fought hard,” Ayers said. “The fight was there, the guts were there. They didn’t stop. That’s all you can ask for, especially as young as we are as a team.”

North Scott, with five freshmen and three sophomores in its starting lineup, made substantial progress since the start of the season when it was blown out by Bettendorf, 9-1.

The Lancers finished the season with seven wins in their last eight matches and their first state tournament appearance in four years.

“We’ve come so far from where we were at the beginning,” Knisley said. “The Bettendorf game, we didn’t even know what we were doing. We were dysfunctional, but we’ve played more as a team, started to understand each other and trust each other.”

Defender Faith Rains, who will continue her soccer career at St. Mary’s (Minn.) next season, said North Scott met expectations with such a young roster.

“I knew we could make it here as long as we wanted it,” she said. “We wanted it. It shows me why I love soccer. I love these girls and I’m definitely going to miss them next year.”

Ayers is excited about the future.

Knisley finished the year with 21 goals and eight assists. Hilsenbeck had eight goals and a team-high 12 assists. They’re both back along with most of the Lancers' back line.

“The biggest thing for us was to get here this year,” Ayers said. “Just to get them to see what we had, what we could do and what the state tournament is about.

“I’m hoping that experience can carry into next year.”

North Scott's Faith Rains (15) holds the state participation trophy after the Lancers lost to Norwalk 3-2 during the Class 2A state quarterfinals at the Cownie Soccer Complex in Des Moines on Tuesday.

North Scott's Kendall Knisley (17) and Norwalk's Serenity Madonia (9) battle for control of the ball during the Class 2A state quarterfinals Tuesday afternoon at the Cownie Soccer Complex in Des Moines. Knisley had a goal and an assist in the match.

North Scott's Lexi Ward (22) heads the ball during Tuesday's match against Norwalk at the Class 2A state tournament.