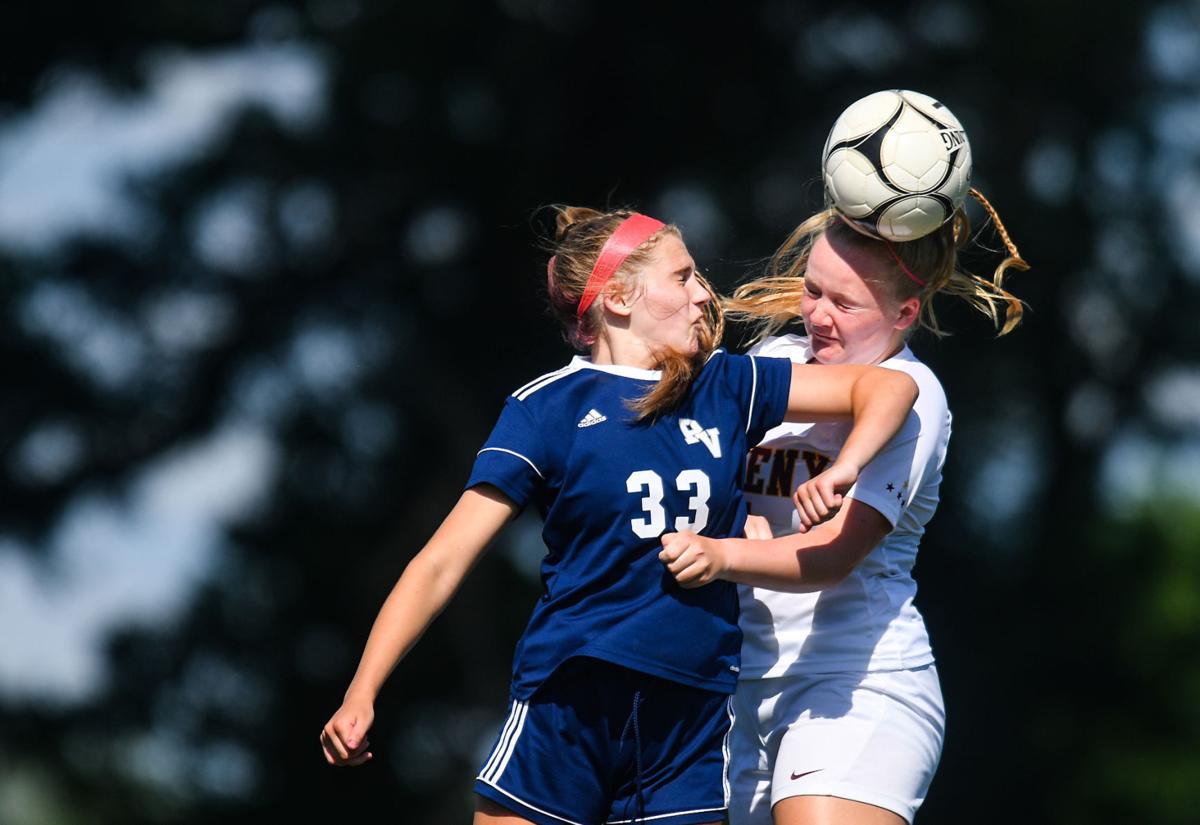 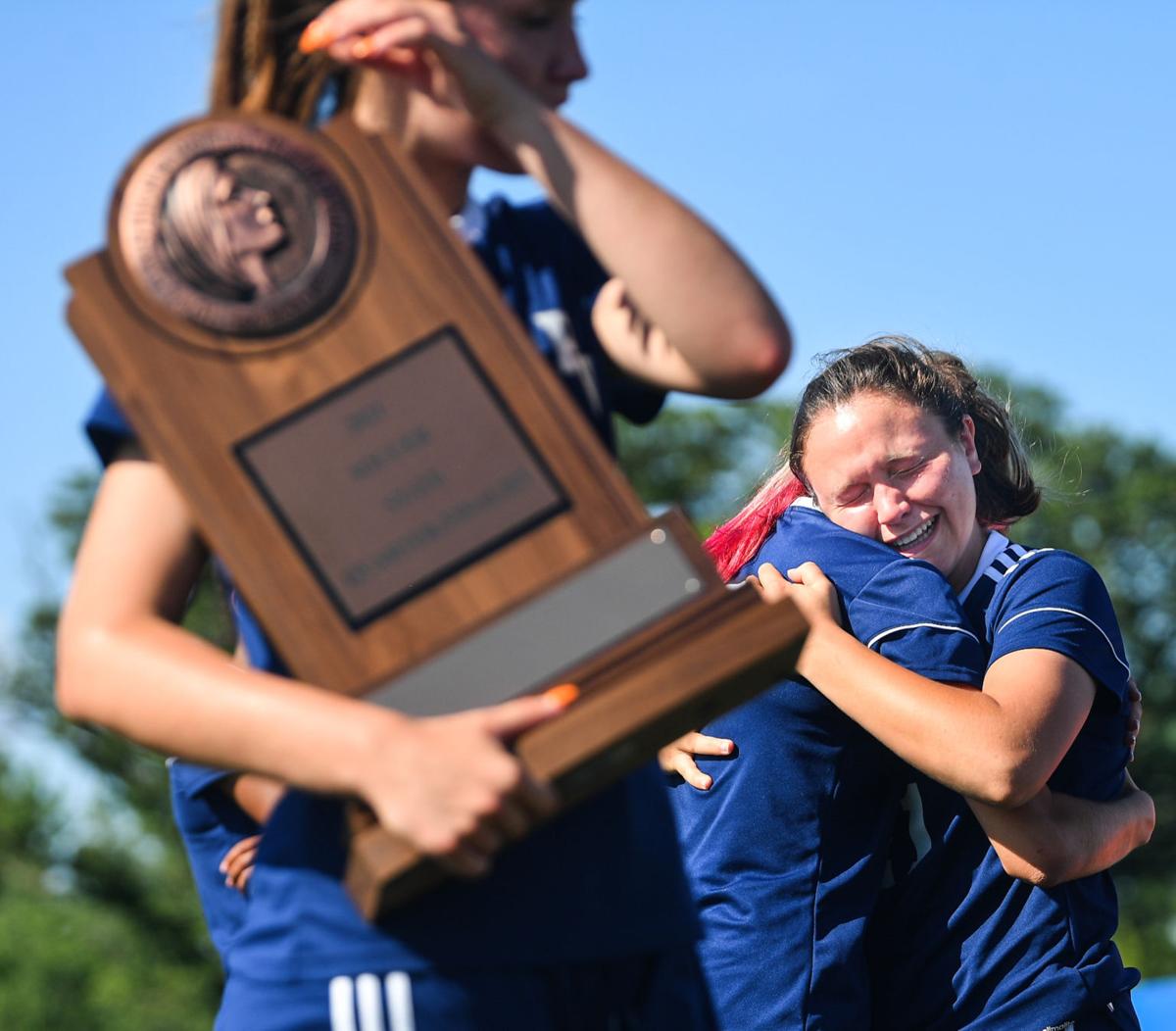 Pleasant Valley players cry after a loss in the final minute of Tuesday's Class 3A state quarterfinal to Ankeny. The Spartans dropped a 1-0 decision. 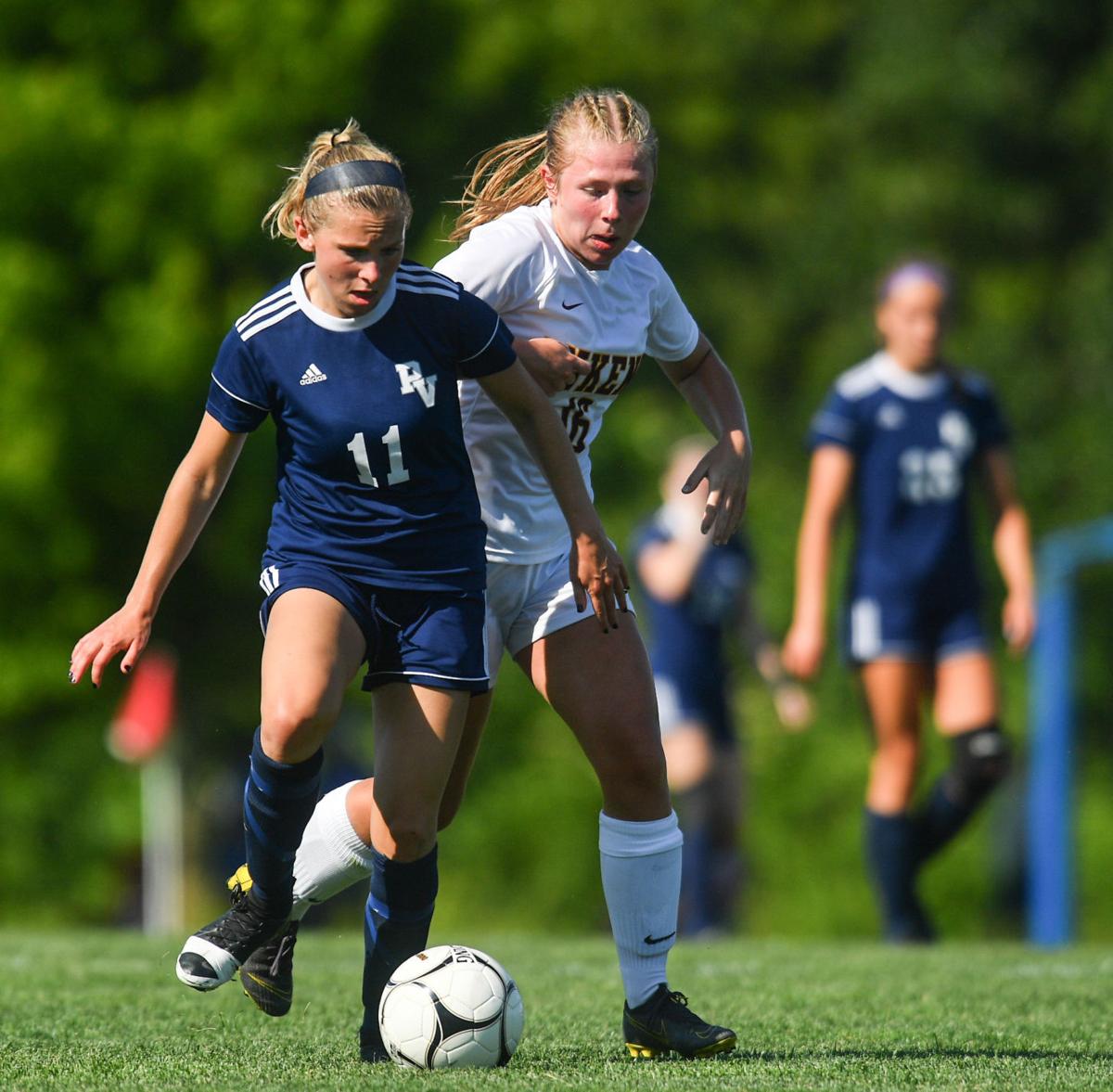 Pleasant Valley's Isabel Russmann (11) and Ankeny's Maddie Feels (16) battle for control of the ball during Tuesday's Class 3A state quarterfinals of the girls state soccer tournament in Des Moines.

DES MOINES — Sports can bring moments of elation. They also can provide moments of agony.

Locked in a scoreless game with Ankeny and 30 seconds from overtime, PV was whistled for a hand ball in the box.

Senior Rachael Christmann stepped up and converted the penalty kick as eighth-ranked Ankeny upended second-ranked PV 1-0 in a Class 3A quarterfinal at the Cownie Soccer Complex.

“That’s unfortunate,” Spartans coach Ed Knupp said. “It comes down to a penalty kick, and it is tough to defend that. It was an unfortunate situation, no intent to have a hand ball.

“It was just unlucky.”

There was little separation between the teams despite what the rankings indicated.

PV (17-3) needed overtime to beat Ankeny (13-4) during the regular season, 1-0. The rematch was fairly even as PV had six shots and Ankeny finished with eight.

“It was just a matter of who was going to finish,” Christmann said. “They had some good chances; we had good chances. It is fitting the game went down to the wire like this.”

The ending was heartbreak for the Spartans, who had designs of following up the boys’ state championship run from last week.

“This is probably the toughest loss we have ever had,” junior forward Jayne Abraham said. “It is for me, personally. It definitely stings.”

With time ticking down in the final minute, Christmann knew she had to try and create a chance.

The team’s leading scorer with 15 goals, Christmann launched a shot just from inside the 18 and it grazed off the hand of a PV defender.

“It was the end of the game, it is hot out, we’ve played a lot of overtimes this season and we knew we didn’t want to play another one,” Christmann said. “Someone has to get a shot off. I shot that, saw it hit the girl's hand and was just hoping the ref blew the whistle.”

Christmann said she felt no nerves as she struck the penalty kick.

“I practice that a lot of times,” she noted. “I’ve been under pressure a lot. It is a matter of blocking everyone out. When I can do that, it is just me and the goalie.”

In all three of its defeats this season — Bettendorf, Dowling Catholic and Ankeny — PV lost 1-0.

“That’s soccer,” said Knupp. “One mistake and you can lose a game, especially if you don’t capitalize on some of the chances you had. That’s one of the things we had gotten so much better at through the second half of the season, finishing our chances. It would have been nice to do it a couple times today.”

The Spartans had a couple quality runs but were a split-second late getting into the box before the Hawkettes’ keeper retrieved the ball.

PV’s Adelaide Wolfe had a shot sail wide in the 53rd minute and Natalie Aller had an attempt miss in the 77th minute.

“The thing we talked about the last two weeks, nothing is promised no matter how great a season you had,” Knupp said. “You’ve got to credit Ankeny for getting after it.”

“I can’t say enough about this team, one of the best I’ve ever coached,” Knupp said. “We have terrific kids and great talent. I hate to see them go out this early because they deserve better.”

The Spartans have a good foundation returning.

Freshman Morgan Russmann was the team’s leading scorer this year with 21 goals and junior Camryn Woods is back after a first team All-MAC season.

“This definitely motivates us to do even more next year and represent our seniors well and carry on without them,” Abraham said. “We need to take what we’ve learned from them into next year.

“There is going to be a lot of those kids,” he said, “that are ready to go next year, probably starting tomorrow.”

Pleasant Valley players cry after a loss in the final minute of Tuesday's Class 3A state quarterfinal to Ankeny. The Spartans dropped a 1-0 decision.

Pleasant Valley's Isabel Russmann (11) and Ankeny's Maddie Feels (16) battle for control of the ball during Tuesday's Class 3A state quarterfinals of the girls state soccer tournament in Des Moines.