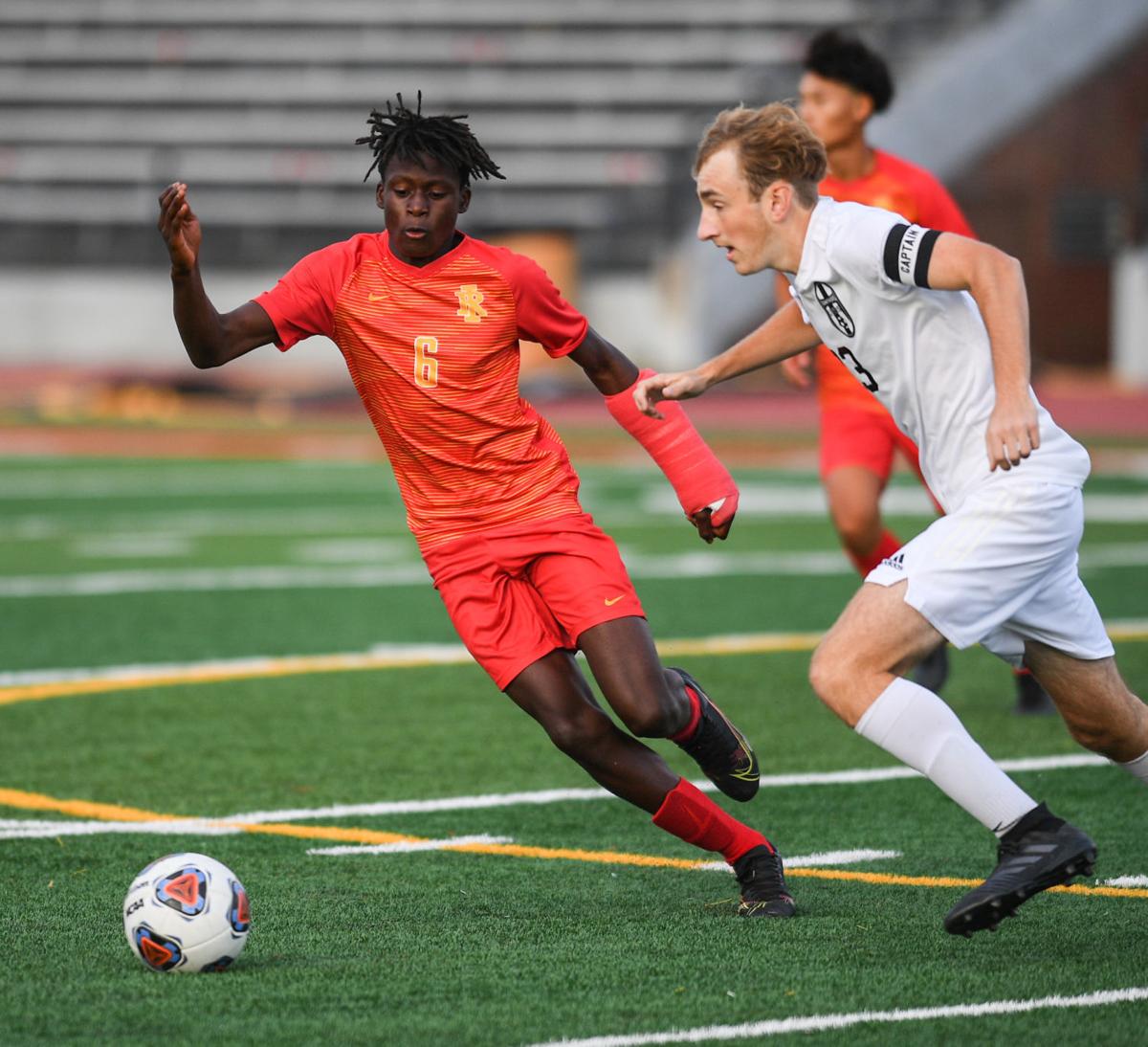 Rock Island’s Benjamin Goeh (6) and United Township’s Dylan Filby (23) battle for control of the ball during their game at Almquist Field on Tuesday in Rock Island. 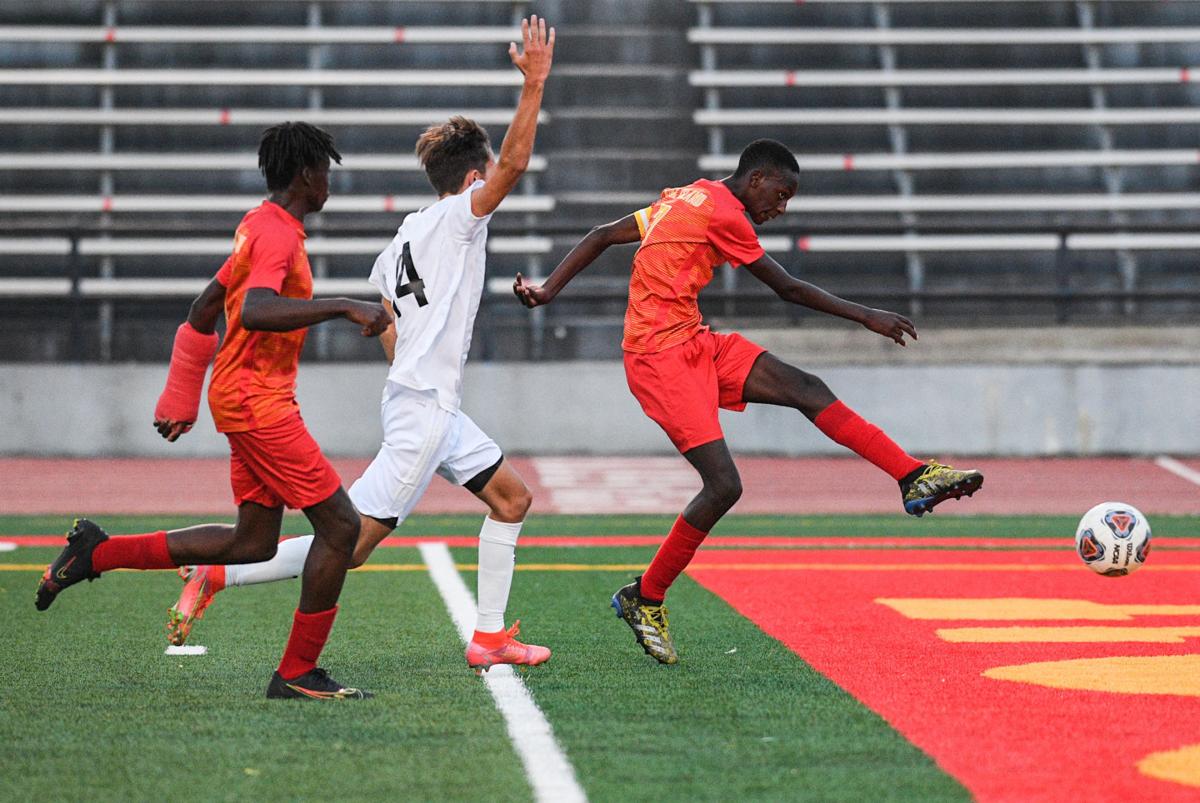 Rock Island’s Reponse Muhoza (7) gets off a shot against United Township during their game at Almquist Field on Tuesday in Rock Island. 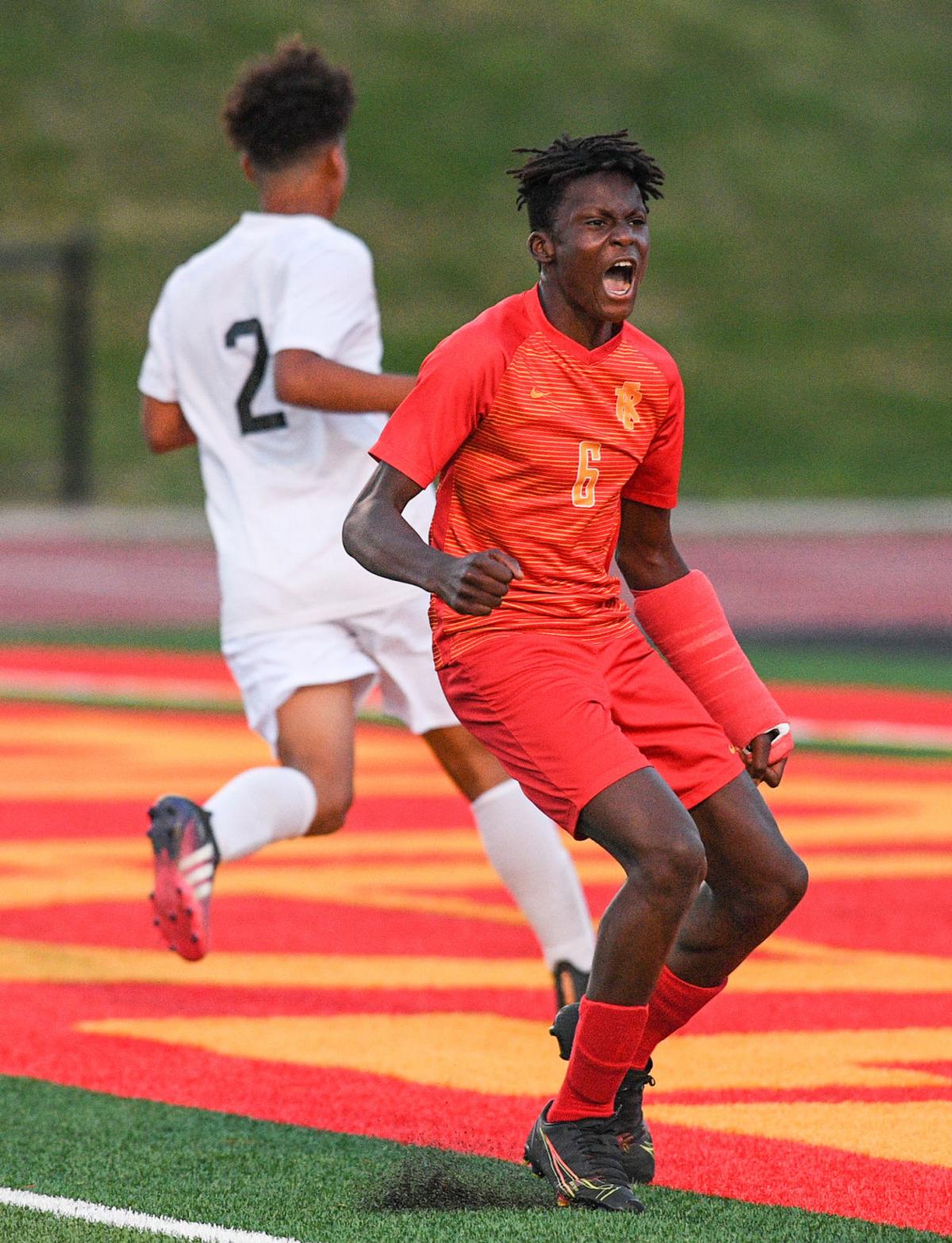 Rock Island’s Benjamin Goeh celebrates his goal against United Township during their game at Almquist Field on Tuesday in Rock Island.

Tuesday's soccer match was more than just a game.

Rock Island's 4-3 hard fought comeback victory over United Township at Public Schools Stadium will go down in the history books, but the Rocks were playing for more than just a win.

In front of a loud and supportive crowd, Rock Island stepped on its home turf for the first time since a charter bus driver refused to let members of the Rock Island boys’ soccer team on the bus who were carrying the Mexican flag in celebration of Mexican Independence Day.

In response, the team decided not to play its scheduled game against Dunlap. Tonight, the team had a Mexican flag hanging behind the bench on the railing in from of the stands. There were also numerous Mexican flags in the stands, either being worn by fans or flown on the concourse.

“We knew the crowd was going to be big,” Rock Island coach Rudy Almanza said. “It was really trying to keep the boys composed. They had a lot of energy and nerves coming into the game. We get crowds, but this one was a bit larger. You got to live in the moment.”

After the game, Almanza talked to his team for over 20 minutes. It was emotional, and a group hug followed his speech. The team posed for pictures holding various flags afterwards as "We Are the Champions" by Queen roared out of the stadium speakers.

“Coming into today’s match after experiencing what had happened, it was just about expressing some feelings and having some fun by showing what we love to do,” Almanza said. “Showing off the flags and not being afraid to show off who we are. The diversity on the team is insane. We have so many different nationalities, and that’s what makes it so much fun. It makes it rewarding to see them win because coming from different areas you have to figure each other out build chemistry.”

The chemistry helped the Rocks battle all night long. Rock Island dominated a majority of the game, but it didn’t reflect on the scoreboard until the end.

Rock Island had 11 shots on goal in the first half compared to only two from United Township, but it was the Panthers who struck first. UT’s Abdelakim Baba-Traore found the back of the net first with a strike from his right side that bent out of the outstretched arms of Rock Island goal keeper Cohen Crawford.

That lead would stand for twenty minutes in the first half, but with just 7:56 to go before the break, Benjamin Goeh finally put Rock Island on the board after a great pass from Alejandro Torres gave Goeh the ability to find the lower left side of the net.

It was the first ball to get past Panther keeper Ismael Hernandez, who had seven saves before that.

And the Rocks weren’t done. Sophomore Htee Soe found the back of the net with a header from a corner kick that put Rock Island ahead 2-1 with 4:38 before half.

That lead wouldn’t stand long, though. UT responded in the second half as Alex Carthan knocked in a goal from just a few yards out thanks to a fantastic assist from Baba-Traore. The Panthers would score once more just a few minutes later on an Andrew King attempt from about 10 yards out.

With 20 minutes to go, Rock Island found itself behind by one despite having nine more shots on goal.

However, that lead would quickly disappear because of Soe.

With 18:12 left, the sophomore midfielder found the corner of the net after a free kick from junior Jake Brandt put the ball in perfect position.

Soe would answer back six minutes later after a loose ball inside the box was kicked out, allowing Soe to get enough speed on his dribbler to bounce past Hernandez and give the Rocks the lead with 12:16 remaining.

“It was just like how they scored back-to-back in the second half to take that lead from us,” Almanza said. “It goes back to what we have been working on the past couple weeks. We know we can’t give up in the final twenty minutes. The last 15 is the most important of the match, just because you are down doesn’t mean the game is over.”

The goal not only put Rock Island ahead, but it gave Soe a hat trick. A rare feat for a sophomore.

“(Soe) deserves a lot of recognition,” Almanza said. “He is a very quiet and soft-spoken individual, but to play his position he has to be very local. I heard his voice quite a bit tonight, but just his touch and vision is great. He deserves a lot. He controlled the field.”

The play got physical after that. The referees stopped the game with 8:12 remaining to tell both teams to calm down after a couple rough contact plays.

In the final minutes the head referee could be heard yelling “settle down, settle down. There is no room for this tonight. Settle down.”

Rock Island was able to hold on for the 4-3 victory, a hard fought win that Almanza wasn’t shocked to see.

“You’ve got crosstown rivals against each other with a big crowd, it was a big game,” Almanza said. “Both teams were definitely going to come out and give their 100. The physical part of the match, that’s the best part of the game. We don’t wear pads so its body-body contact. I love the physical aspect of the game.”

Rock Island (2-2 in WB6) will play next at 6 p.m. Tuesday against Galesburg at home.

United Township (1-3 in WB6) will return to the pitch at 4:30 p.m. Wednesday against Orion-Sherrard on the road.

The WB6 All-Conference teams were announced Wednesday. Moline's Saiheed Jah was voted as the league's MVP. Moline and Quincy had seven athletes recognized, the most in the conference.

Rock Island’s Benjamin Goeh (6) and United Township’s Dylan Filby (23) battle for control of the ball during their game at Almquist Field on Tuesday in Rock Island.

Rock Island’s Reponse Muhoza (7) gets off a shot against United Township during their game at Almquist Field on Tuesday in Rock Island.

Rock Island’s Benjamin Goeh celebrates his goal against United Township during their game at Almquist Field on Tuesday in Rock Island.