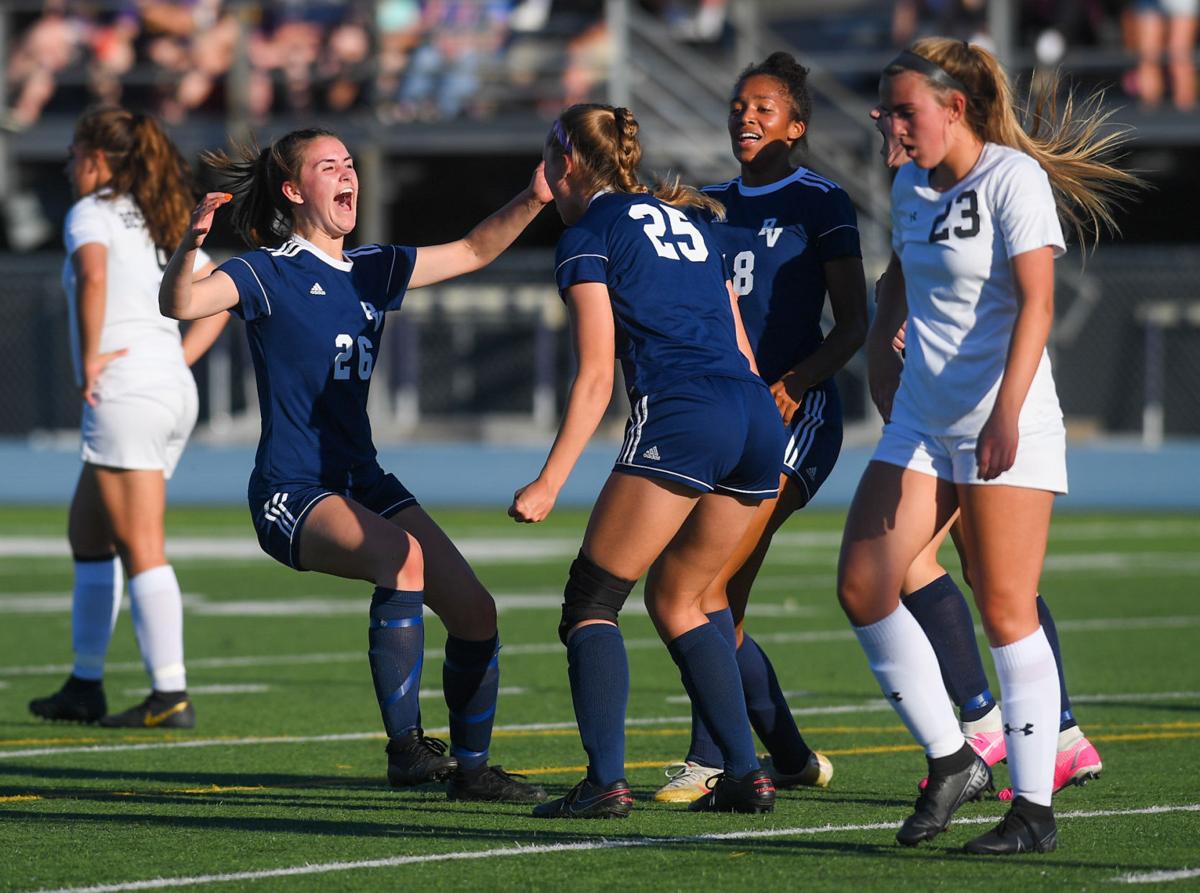 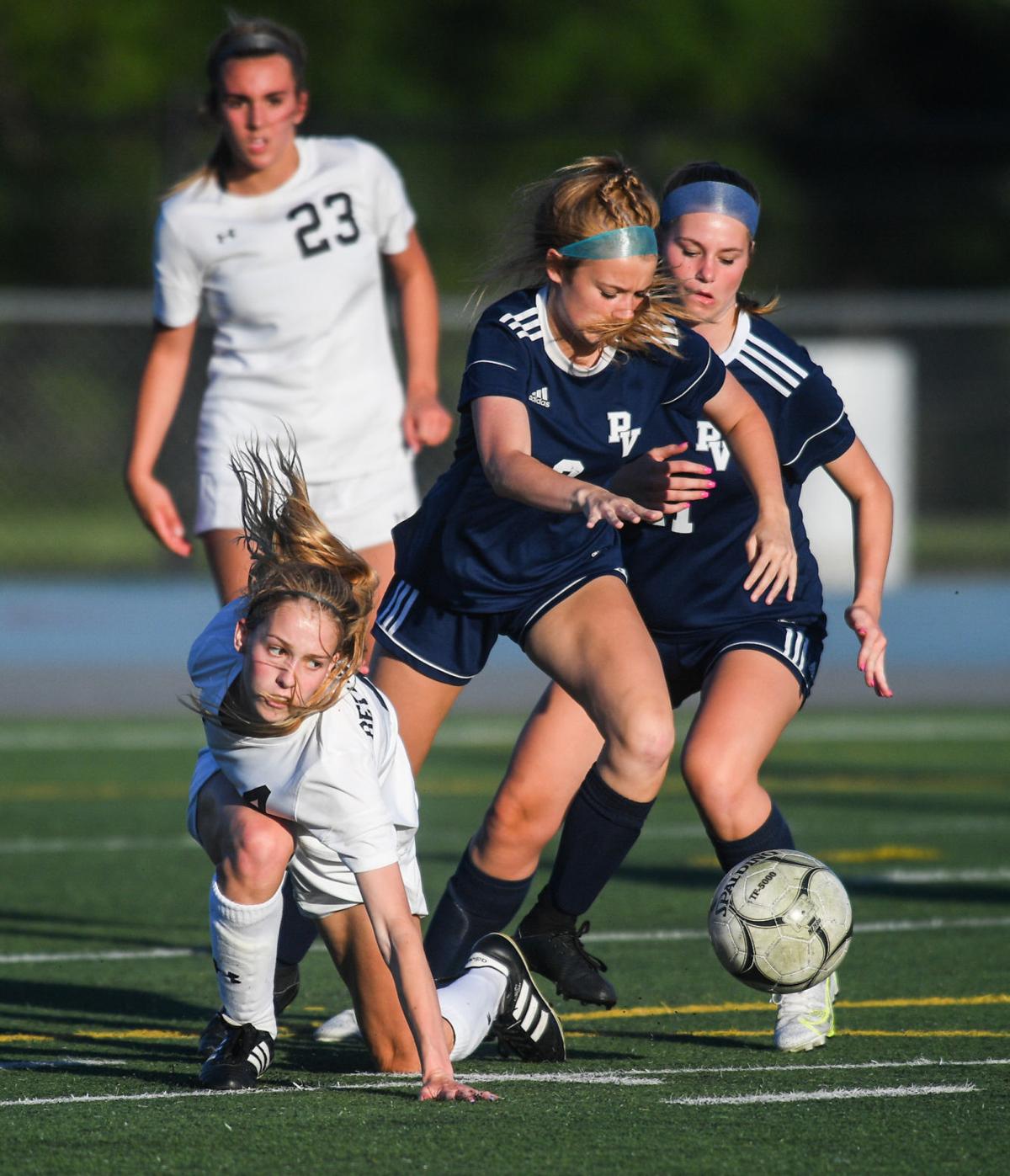 Pleasant Valley's Landry Tucker (2) takes control of the ball from Bettendorf's Sophia Utsinger (4) during the Class 3A regional final at Pleasant Valley High School on Friday night. The Spartans prevailed 4-0. 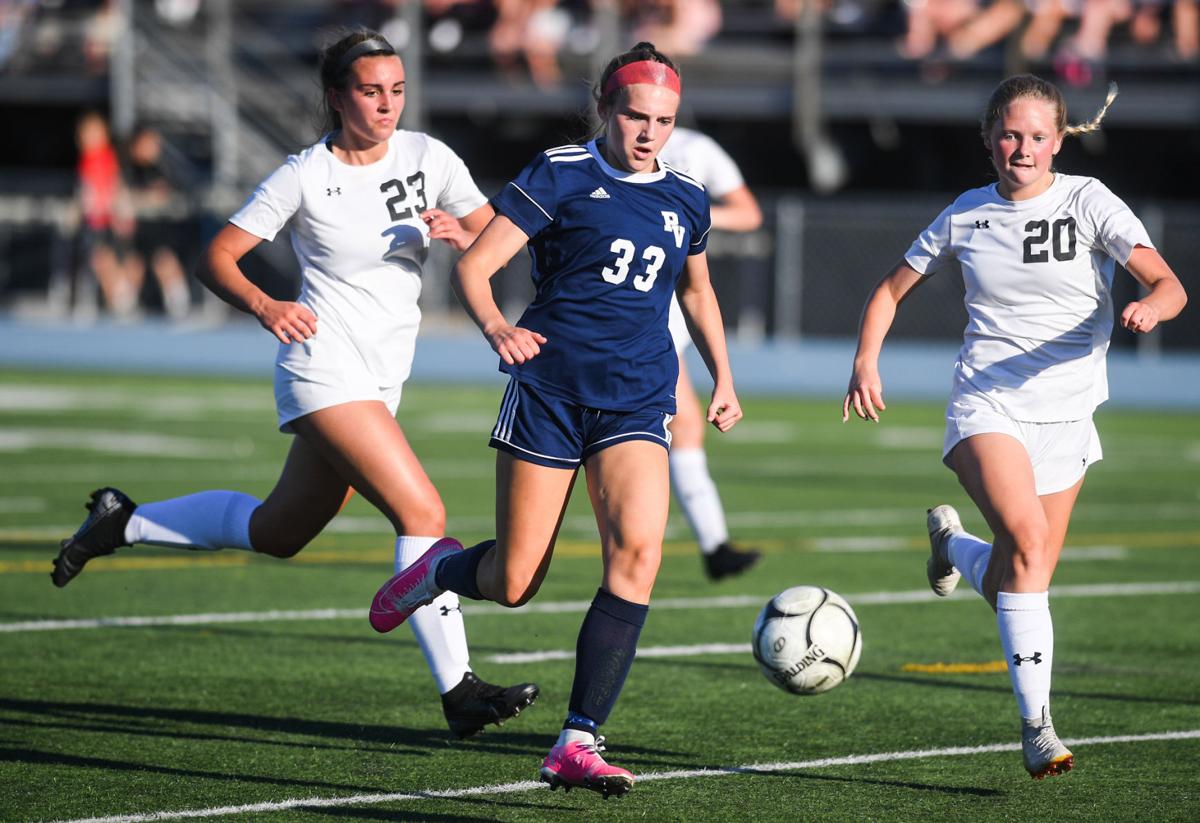 Pleasant Valley's Morgan Russmann (33) gets through Bettendorf's Jordan Martens (23) and Olivia Wiley (20) during a Class 3A regional final Friday night. The Spartans posted a 4-0 victory.

The Pleasant Valley High School girls’ soccer team did not forget what transpired 35 days ago. The Spartans out-possessed and out-shot their rival but walked off the TouVelle Stadium turf at Bettendorf with their first defeat of the season.

“It was so devastating,” junior Camryn Woods said. “You never want to lose a rivalry game, especially to Bettendorf. That (loss) just motivated us and it showed on the field tonight.”

Class 3A second-ranked PV earned some payback Friday night with a 4-0 win over 12th-ranked Bettendorf in a regional final at Spartan Stadium.

The victory sends the Spartans into Tuesday’s state tournament at Cownie Soccer Complex in Des Moines against eighth-ranked Ankeny at 3 p.m. PV will be one of four Mississippi Athletic Conference teams in the three-class tournament along with Davenport Assumption (1A), North Scott (2A) and Muscatine (3A).

“That loss to Bettendorf filled up our entire mind the last month,” freshman Morgan Russmann said. “After we lost, we knew we had to win when it mattered.

“We were definitely more focused because we knew it meant more. This was the one where our season was on the line.”

PV (17-2) received a goal in each half from Russmann and Woods to earn its third consecutive state trip and 18th in program history.

Spartans coach Ed Knupp said the difference was simple between Friday and the April 30 meeting.

“We had some great opportunities the last time we played, but (Bettendorf keeper) Ella Kilstrom had a great game,” Knupp noted. “I thought we played the same way tonight, but we were better at finding the back of the net.

“We’re getting contributions from a lot of people. We played 21 different players tonight. To do that and not have a drop-off against a good team, it says something about your program.”

The Spartans had 23 shots in the match. They broke through in the 13th minute when Russmann’s left-footed kick went off Kilstrom’s hands and into the goal.

About 17 minutes later, Woods lined up a shot from just inside the box and rifled it past Kilstrom in the upper-left corner.

“We were getting into the box and finishing tonight,” Woods said.

“I thought they showed more poise than we did tonight,” Bettendorf coach Todd Hornaday said. “We made a couple mistakes in the first half that unfortunately cost us.”

Woods scored in the opening minute of the second half on a rebound attempt. Russmann added her second goal of the night, outracing a Bettendorf defender in the 75th minute.

It was more than enough for a PV squad which hasn’t surrendered a goal since May 1, a span of seven matches.

For the second straight meeting, PV did a very good job of corralling Bettendorf’s high-powered attack of Avery Horner and Sophia Utsinger.

“(PV’s) defensive organization is solid,” Hornaday said. “Part of our game is trying to find a slotted ball. They had those angles cut off really well all night.

“They’re a very well-coached team, very aggressive and that aggressiveness will suit them very well at the state tournament.”

Bettendorf finished the season 13-5 and won a share of the MAC title. It graduates three seniors in Kilstrom, Utsinger and Abby Schafer.

“This has been one of the most positive teams I’ve coached,” Hornaday said. “Even when the score was 3-0 tonight, we didn’t give up. It was a tough way for three terrific seniors to go out, but at least we got a season this year.”

When the final horn sounded, there was a mild celebration among the PV players. There is more on the goal list for the Spartans.

“We definitely have a lot left in us,” Russmann said. “We’ve been preparing this whole season, especially without a season last year, to come home winning state. We’re so ready for it.”

Knupp believes his team is in a good place heading into the state tournament. The Spartans have outscored their last seven foes 30-0.

“There is a lot of confidence throughout our seniors, which are terrific leaders, and we had some freshmen in there tonight, contributing and being dangerous,” he said. “That’s a great culture to have.”

Davenport Assumption earned its 14th straight trip to the state tournament Friday night with a 10-0 win over Solon at the St. Vincent Complex.

Pleasant Valley's Landry Tucker (2) takes control of the ball from Bettendorf's Sophia Utsinger (4) during the Class 3A regional final at Pleasant Valley High School on Friday night. The Spartans prevailed 4-0.

Pleasant Valley's Morgan Russmann (33) gets through Bettendorf's Jordan Martens (23) and Olivia Wiley (20) during a Class 3A regional final Friday night. The Spartans posted a 4-0 victory.