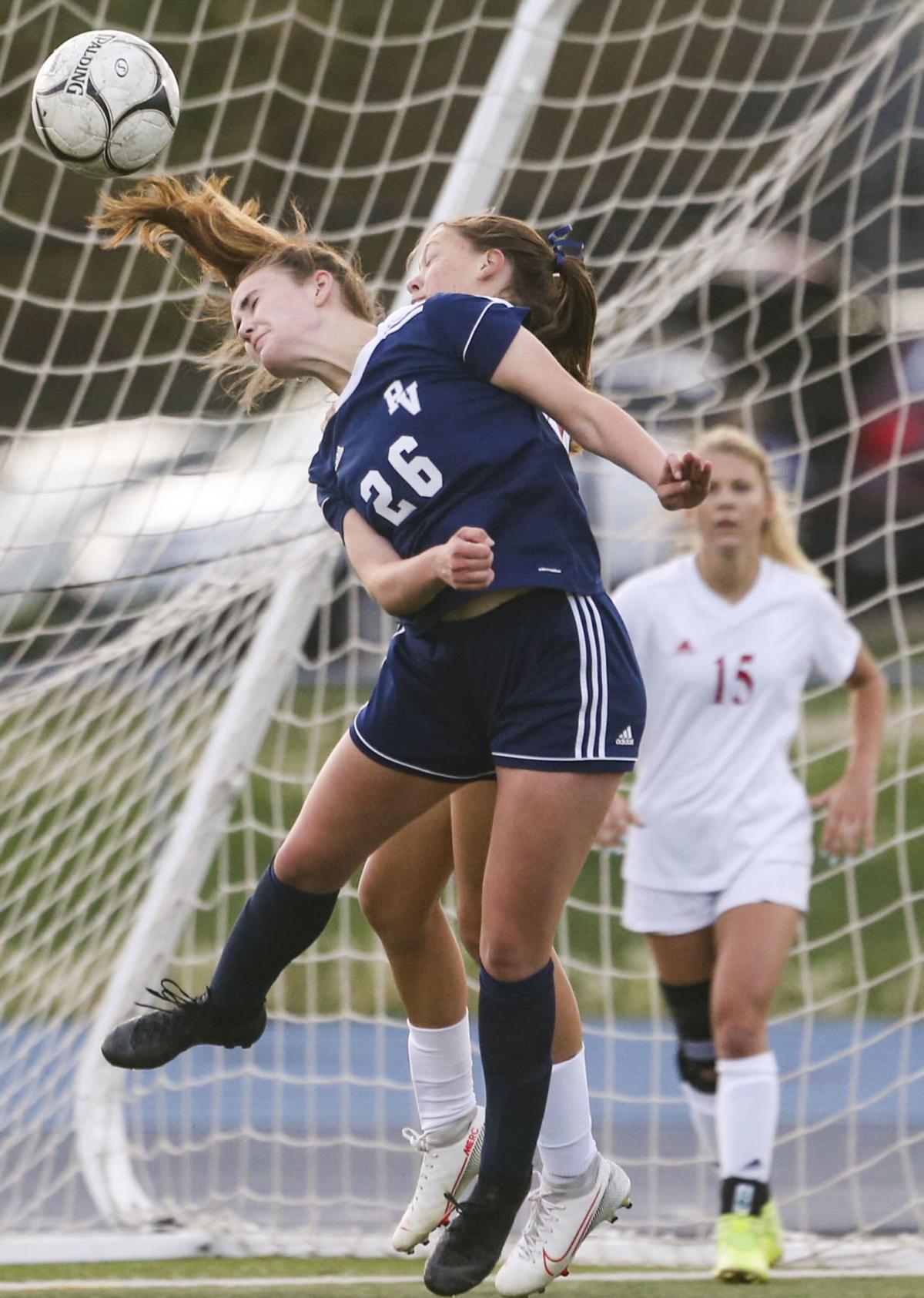 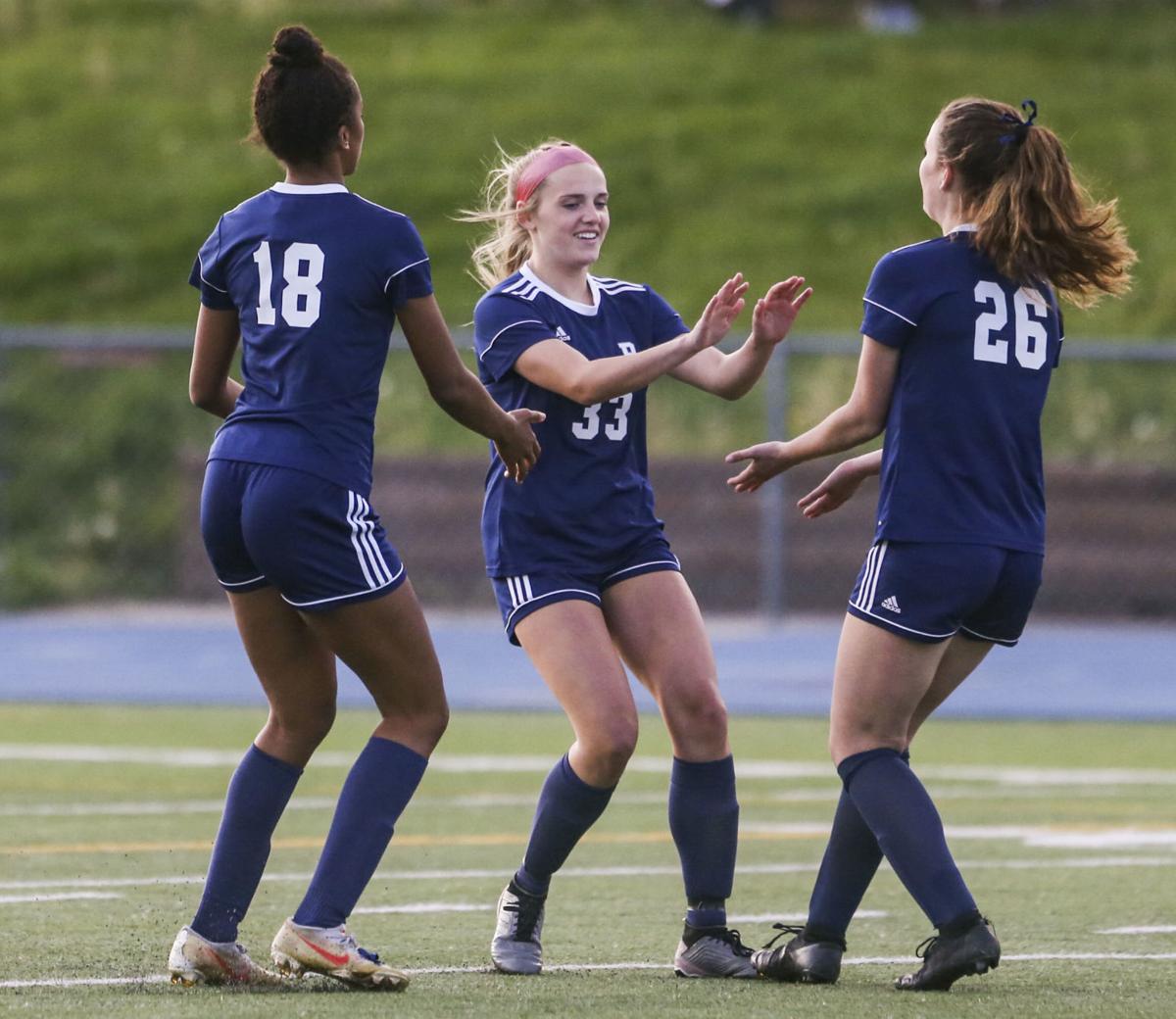 Pleasant Valley's Morgan Russmann (33) celebrates with teammates after scoring against North Scott at Pleasant Valley High School in Bettendorf on Tuesday. The Spartans beat the Lancers 2-0. 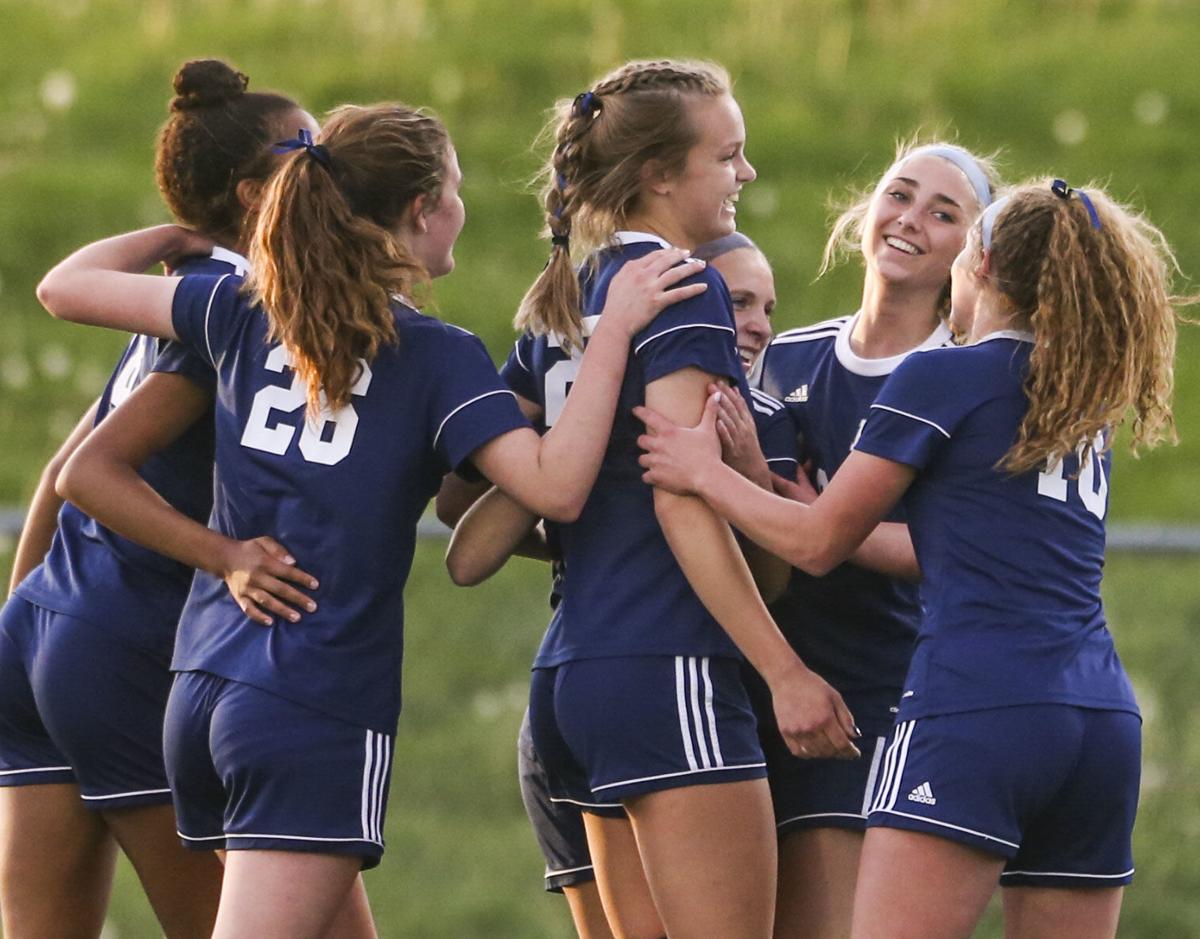 Pleasant Valley's Camryn Woods (25) celebrates with her teammates after scoring in the 26th minute of Tuesday night's 2-0 win over North Scott at Spartan Stadium. 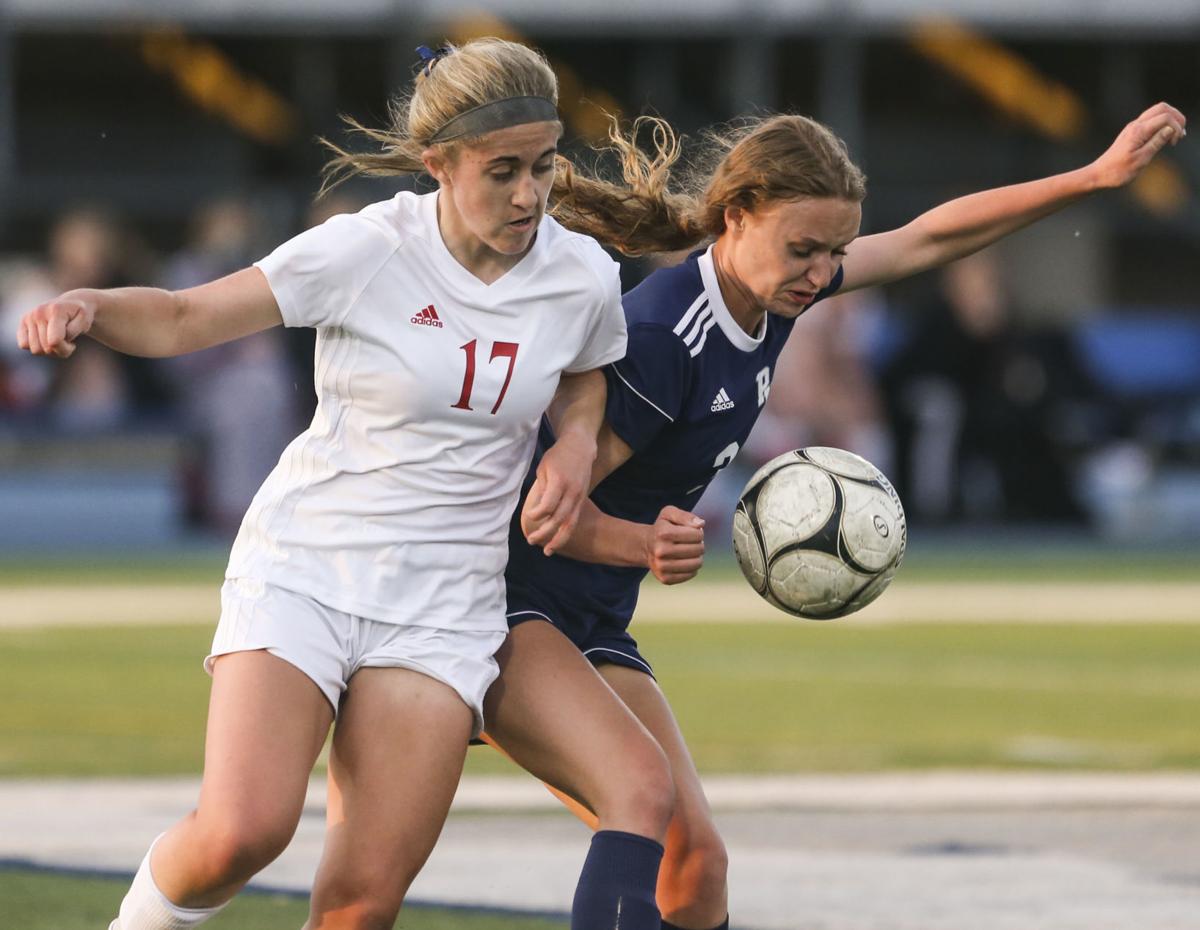 North Scott's Kendall Knisley battles for control of the ball with a Pleasant Valley player during Tuesday night's match at Spartan Stadium.

The Class 3A top-ranked Spartans finished their rugged stretch to the opening month Tuesday night with a 2-0 Mississippi Athletic Conference win over 2A ninth-ranked North Scott at Spartan Stadium.

“To come out of that at (11-2), that’s awesome,” said PV coach Ed Knupp, whose team has held nine of those opponents scoreless. “We really tested our team in terms of endurance and being able to physically, mentally and emotionally manage their way through the toughest schedule in the state.

“It was great for us, and we learned a lot about ourselves.”

With a week until its next match and only one more ranked foe on its regular-season schedule in Muscatine, PV can reflect on what has been an absolute grind.

The Spartans have played six teams in this week’s top 11 of the Iowa Girls High School Athletic Union’s 3A state rankings — No. 2 Ankeny Centennial, No. 3 Linn-Mar, No. 4 Waukee, No. 6 Dowling Catholic, No. 7 Ankeny and No. 11 Bettendorf.

Throw in 1A top-ranked Davenport Assumption and 2A top-10 North Scott, it has been a gauntlet.

PV was on track to come out of that unblemished until consecutive 1-0 losses to Bettendorf and Dowling last weekend.

“We knew coming out of that undefeated was going to be hard,” freshman Morgan Russmann said.

The Spartans regained their mojo Tuesday. In particular, they found the back of the net again.

Despite outshooting its past two opponents by considerable margins, PV had nothing to show for it on the scoreboard.

Russmann scored on a breakaway in the third minute. Camryn Woods cleaned up a shot that went off North Scott keeper Paige Westlin’s hands in the 26th minute for the second goal.

“We’ve been working a lot on shooting,” Russmann said. “We haven’t been finishing, so it was a relief to get that one early and to let us know we know what we’re doing.

"We were all really excited and it felt amazing to finally score again.”

North Scott, which had its five-game win streak snapped, tried to take away the middle of the field from PV. The Spartans maintained possession for a large portion of the match and finished with a 19-8 advantage in shots (9-3 on goal).

“I think a loss or two was good for us, honestly,” Woods said. “It made us realize what we need to work on and finishing is the most important thing for us.

“To get this win, that’s good for our future and the rest of the season. We have our confidence back now and we can perform like we have been.”

Knupp said his team spends considerable time in practice and in pregame on finishing shots. In particular, they concentrate on shooting under pressure. The Spartans, he said, just ran into a couple of stellar goalkeepers last week.

"We weren’t connecting our passes as well the past couple of matches," Russmann said, "but tonight we got it back and it helped us to be successful and finish.”

North Scott was a bit short-handed. The Lancers were without midfielder Adeline Finnicum, who came down with food poisoning Monday night. It forced North Scott coach Dion Ayers to shuffle some players into different positions.

Still, he had no complaints with his team’s play as nine of North Scott's 11 starters were freshmen and sophomores.

“Our one-on-one defense was better tonight,” Ayers said. “I wasn’t disappointed in the effort at all.”

“We got bullied off the field against Bettendorf, almost on the verge of quitting in the first half,” Ayers said. “We talked at halftime of that match about character and holding each other up.

“We’re playing with a little more pride and our freshmen and sophomores are understanding the physicality of the MAC. Since that Bettendorf game, we haven’t put our heads down.”

Rock Island and Quincy girls must settle for tie

It took 79 minutes for the Rock Island girls soccer team to get on the board in its game against Quincy on Monday night.

Pleasant Valley's Morgan Russmann (33) celebrates with teammates after scoring against North Scott at Pleasant Valley High School in Bettendorf on Tuesday. The Spartans beat the Lancers 2-0.

Pleasant Valley's Camryn Woods (25) celebrates with her teammates after scoring in the 26th minute of Tuesday night's 2-0 win over North Scott at Spartan Stadium.

North Scott's Kendall Knisley battles for control of the ball with a Pleasant Valley player during Tuesday night's match at Spartan Stadium.