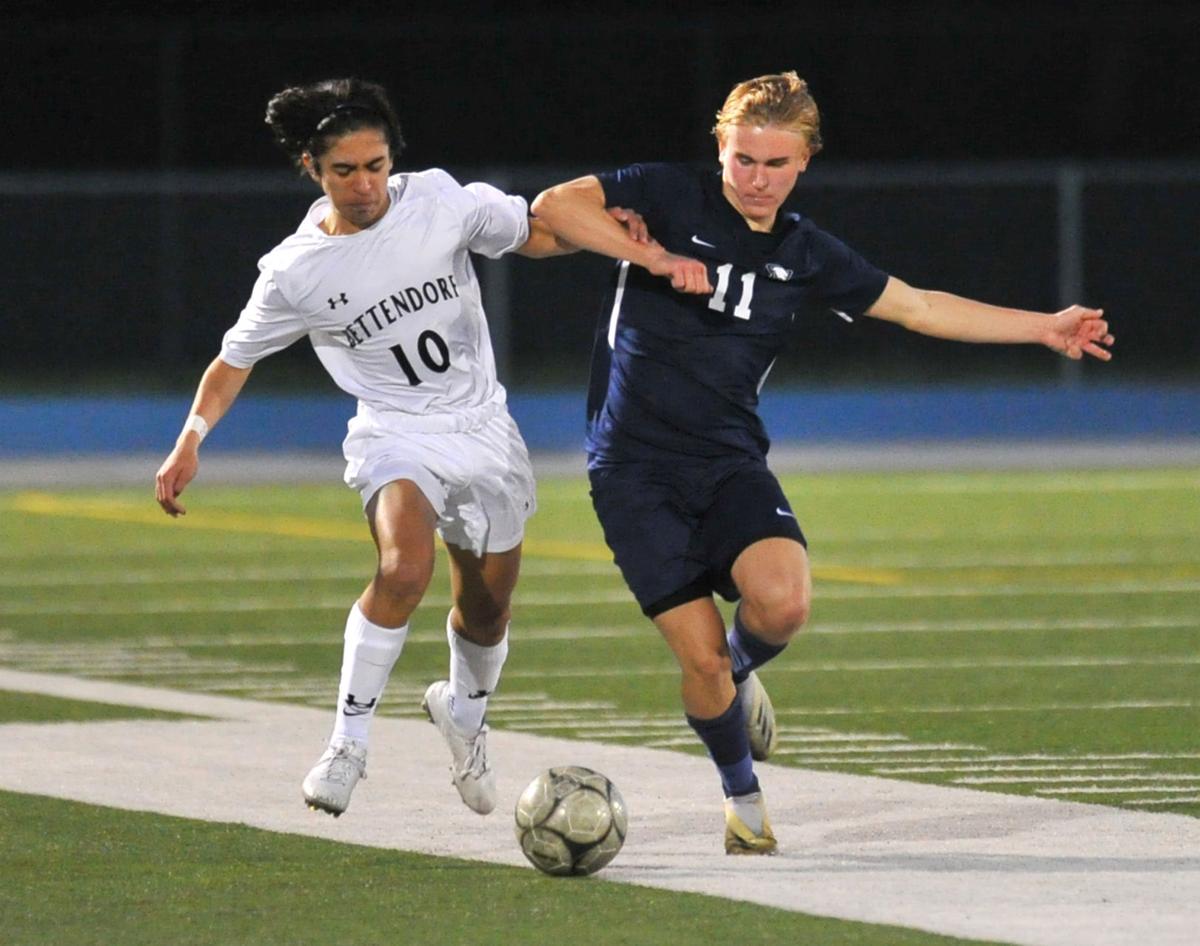 Bettendorf's Xavier Potts and Pleasant Valley's Aidan Judd battle for the ball in the second half Monday night at Spartan Stadium. The Spartans beat the Bulldogs 1-0. 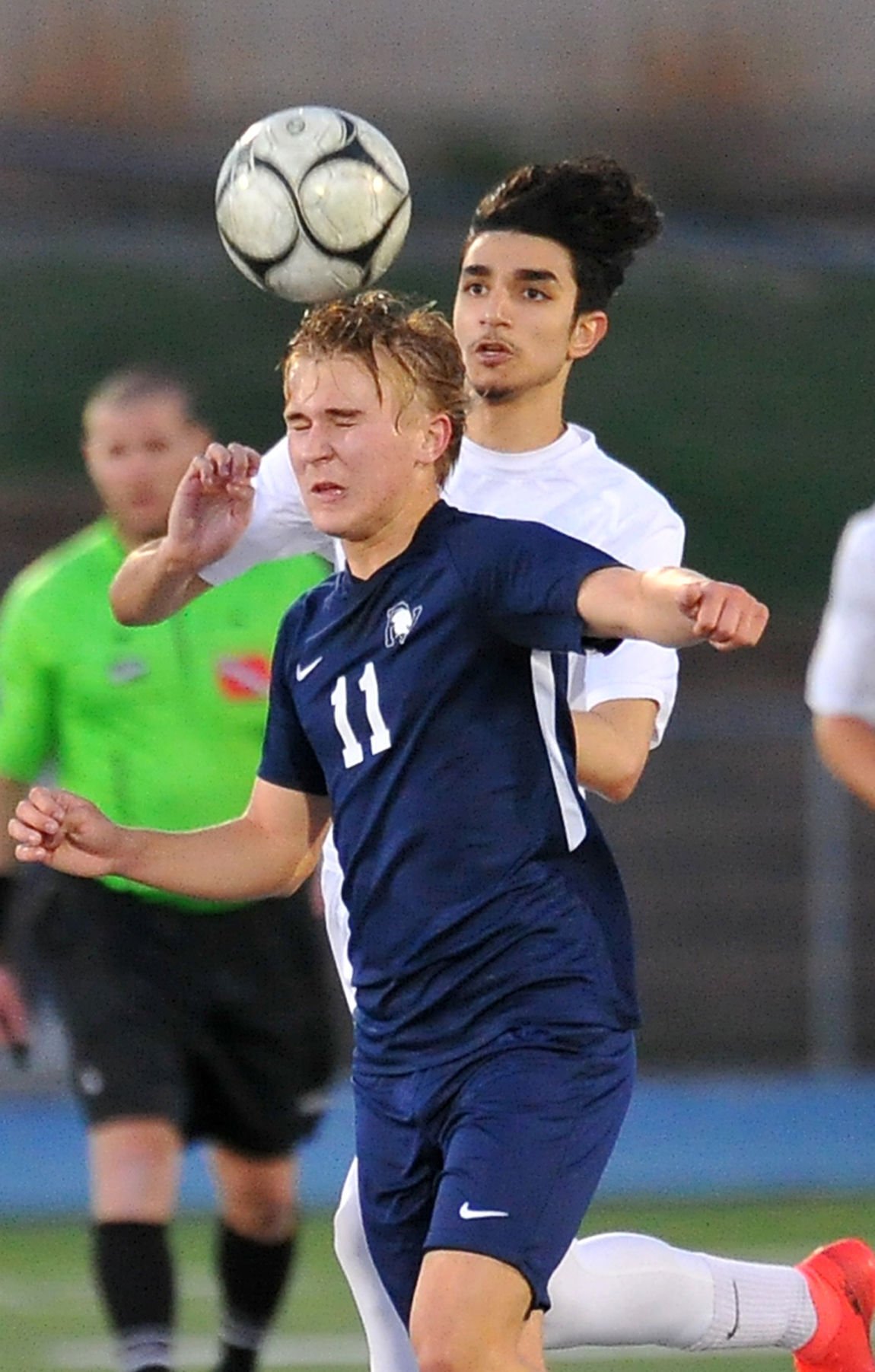 Pleasant Valley's Aidan Judd heads a ball in front of Bettendorf's Mohamed Monkari during the first half Monday night. 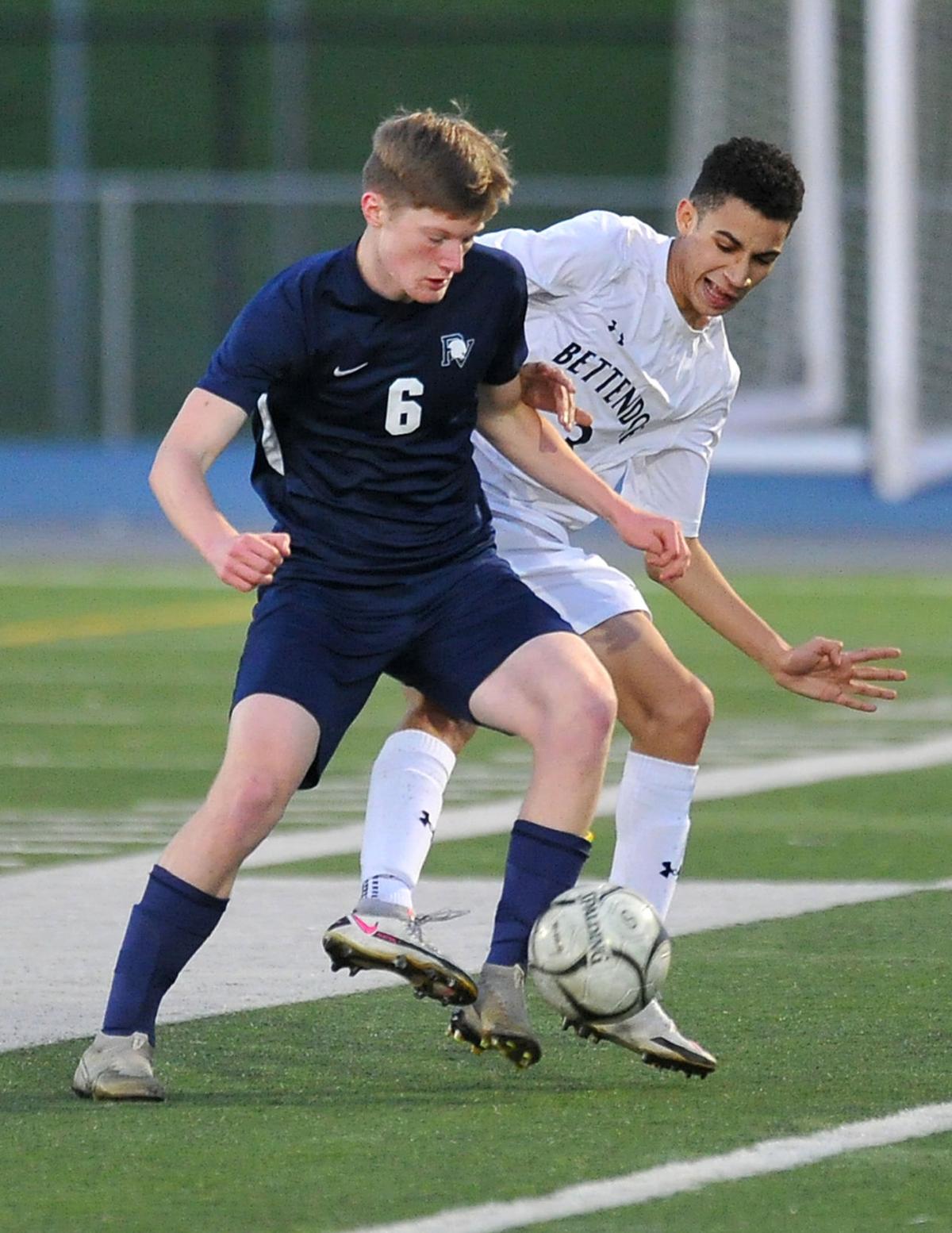 Pleasant Valley's Owen Gannaway and Bettendorf's Noah Shook battle for control of the ball in the first half Monday. The Spartans posted a 1-0 win over the rival Bulldogs at Spartan Stadium.

The Pleasant Valley High School boys soccer team controlled possession and had ample opportunities to put the ball in the back of the net for the first 70 minutes Monday night.

One shot ricocheted off the post. Others sailed wide or were snatched by Bettendorf keeper JJ Gonzales-Hayes.

Finally, with less than 10 minutes remaining in regulation, senior Jack Thompson booted one past Gonzales-Hayes to fuel Pleasant Valley to a 1-0 victory over Bettendorf in a Mississippi Athletic Conference tilt at Spartan Stadium.

“We had a lot of shots, but they just weren’t falling,” Thompson said. “It felt good to finally get one.”

Bettendorf (3-1, 2-1 MAC) had a bad touch as it tried to clear the ball in the 72nd minute. PV junior Rhys Ward blocked it with his chest, saw Thompson making a run in the middle of the field and toe-poked it toward him.

Thompson tried to connect the first time, but it was blocked. He was able to relocate it, from just inside 10 yards, and pushed it into the left side for the match’s lone goal.

“They started connecting their passes and their patterns were really good,” Bettendorf coach Ben Pennington said. “Pleasant Valley is a very disciplined team.

“I thought we moved well and gave ourselves a couple opportunities. I’m really proud of these young guys. We know what we’ve got to work on, but I really like the team we have here.”

For PV’s upperclassmen, there was plenty of motivation.

Just two years ago in the substate final on the same field, Bettendorf dashed PV’s hopes of a first state tournament trip with a 1-0 victory after the Spartans beat them 3-0 in the regular season.

“This is big for us, considering two years ago we were over here crying about not going to state,” Ward said. “This is definitely a big win.

“We used it as a way to bounce back and show what PV soccer can do.”

The Spartans had possession for about 75% to 80% of the match. They had 14 shots to just three for the Bulldogs.

Ward had multiple shots on goal inside the 18-yard box that just missed.

“Bettendorf made it really difficult on us defensively,” PV coach Wayne Ward said. “They did a really good job of blocking our spaces. The bottom line is, you’ve got to score to win games, and we managed to get one through.”

It would have been easy for the Spartans to get frustrated as the match went on from the missed chances. They just kept attacking.

“We try not to get frustrated,” coach Ward said. “It is like playing golf. The more frustrated you get, the harder you try to score and the golf swing gets worse.

“We just try and tell the boys get it between the white sticks and make (JJ) work.”

Bettendorf had a couple corner kicks but not a wealth of scoring chances. PV keeper Gabe Johnson made only one save, that off a free kick early in the second half from Chase Wakefield.

The Spartans have yet to allow a goal in four matches. In fact, Ward’s program hasn’t yielded a goal in 13 consecutive conference matches dating back to the 2018 season.

“Most of us play together year-round,” Thompson said. “We know each other really well, and we have a really good chemistry between us, on and off the field.”

While PV savored the win, it realizes a rematch could happen with higher stakes next month. In the past, Bettendorf has found a way to reverse the score.

“Our main goal is to make it to state,” Thompson noted. “The past couple of years we’ve lost to Bettendorf, so we want to get past that point and go from there.

“We just need to keep working, tighten up our finishing in the final third so we can get more shots to fall.”

Despite Moline having a big advantage in scoring opportunities, the Alleman girls soccer team made its shots count in a significant 2-1 Wester…

The best plays Davenport Central soccer player Enrique Diaz made for his team was not some fancy move or blasted shot against Muscatine on Thursday.

Sweet Caroline: Hazen shines for Maroons in win over Wildcats

Moline junior Caroline Hazen had a hat trick and an assist Wednesday as her team raced past Davenport North in girls soccer.

Bettendorf's Xavier Potts and Pleasant Valley's Aidan Judd battle for the ball in the second half Monday night at Spartan Stadium. The Spartans beat the Bulldogs 1-0.

Pleasant Valley's Aidan Judd heads a ball in front of Bettendorf's Mohamed Monkari during the first half Monday night.

Pleasant Valley's Owen Gannaway and Bettendorf's Noah Shook battle for control of the ball in the first half Monday. The Spartans posted a 1-0 win over the rival Bulldogs at Spartan Stadium.