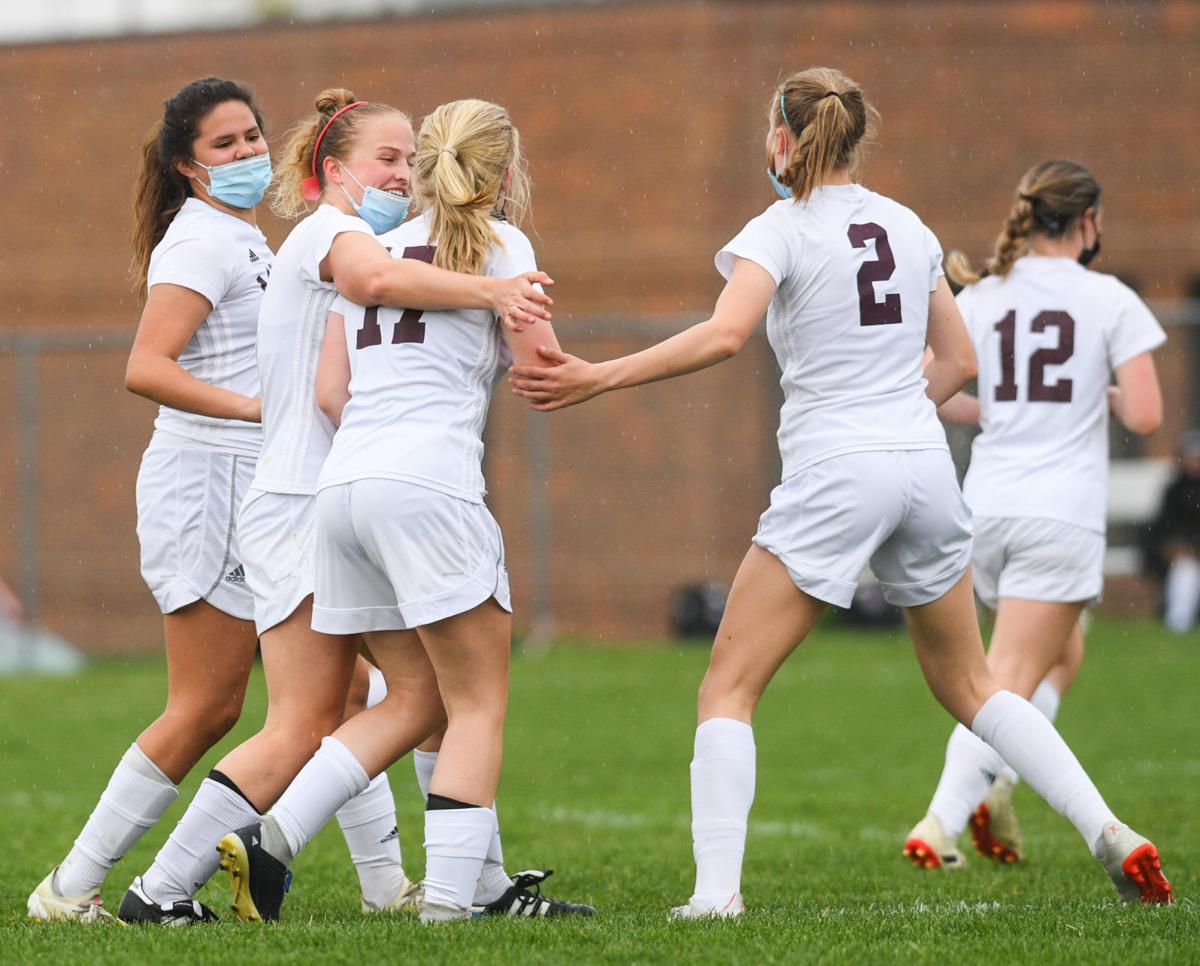 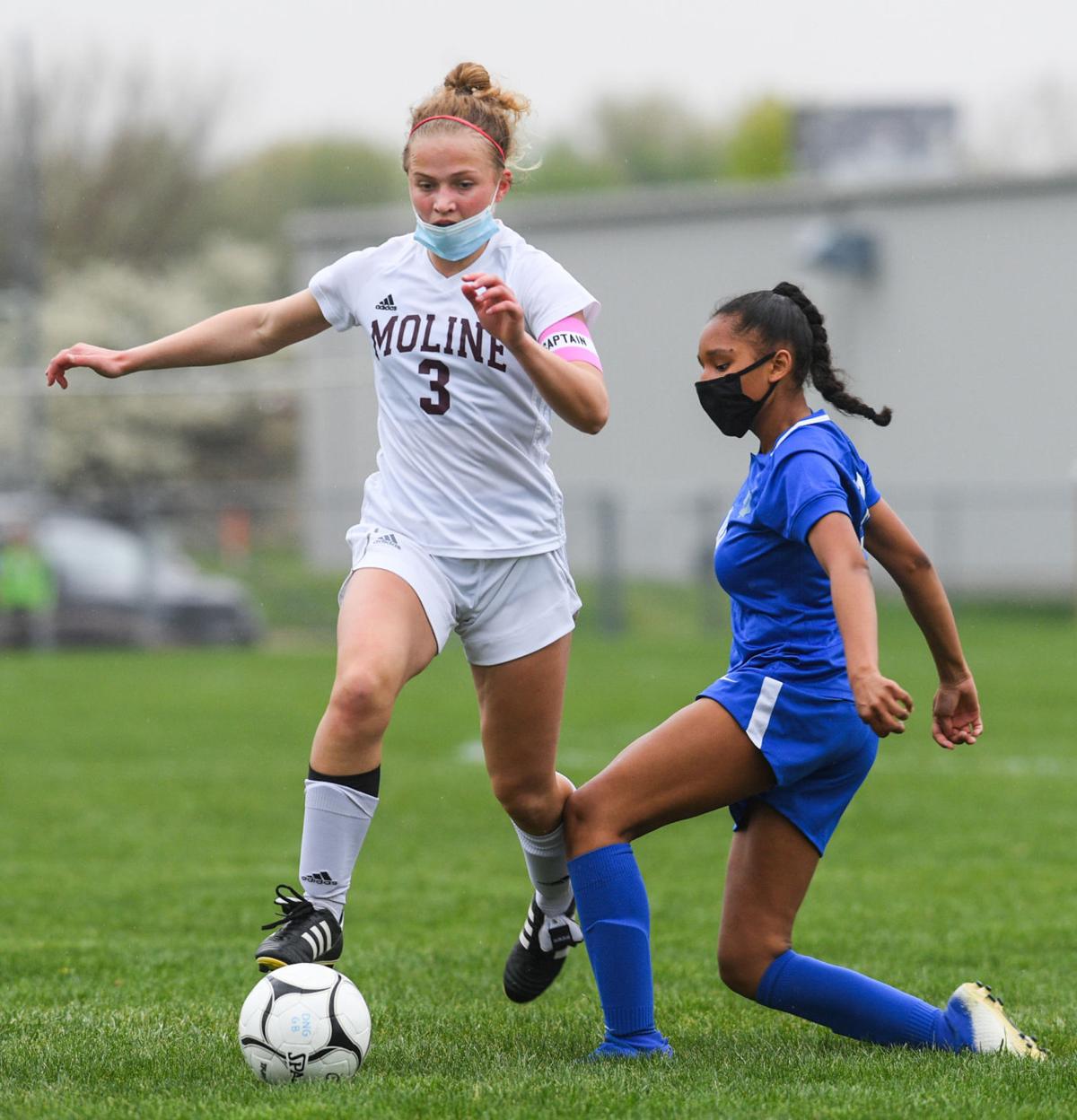 Moline's Caroline Hazen (3) gets around Davenport North's Logan Brown (10) during their match at the high school Athletic Complex Wednesday, April 28, 2021, in Davenport.

At times, it might have felt like the entire Davenport North girls soccer team was trying to stop Moline’s Caroline Hazen.

The scary part was even that didn’t seem to matter.

The Maroons’ junior sliced and diced the Wildcats’ defense for three goals and an assist and was by far the most dominant force on the field as Moline rolled to a 6-0 non-conference victory on Wednesday afternoon.

In simple number terms — especially in the first half — it could not have been more lopsided. Hazen had nine of Moline’s 15 shots on goal by herself, created and took all five of Moline’s corner kicks and routinely went past and through North defenders like they weren’t there.

She set up Moline’s first goal just seconds into the game when she made a strong run down the right-side from the opening whistle and let loose a 25-yard blast that Wildcats’ goalie Emma Jauron made a save on but could not hold onto.

Hazen’s teammate, Vanessa Ramirez, was there for an easy rebound as the visitors were on the board just 18 seconds in with a 1-0 lead.

While the Maroons (2-3) went nearly the rest of the half without scoring, Hazen was still creating chances and setting up her teammates. Hazen got her first goal in the final minute of the first half when Vivian Veto released Hazen with a great midfield pass and Hazen was able to beat Jauron to the top left corner to leave it 2-0 at halftime.

In the 47th minute, Hazen beat two defenders then was fouled by a third in the penalty box. She converted the penalty for her second and a 3-0 edge. Although Hazen didn’t get an assist in the 52nd minute, it was her strong shot that again caused a rebound to get back out near the top of the penalty area.

Freshman Lauryn White gathered the rebound for Moline and scored from 20 yards out to make it 4-0.

Two minutes later, Hazen got a true assist when she again beat multiple defenders, dribbled the ball in along the goal-line then sent a perfect centering pass to Allyssa Pirmann who finished from 6 yards out to move the lead to 5-0. Hazen closed her own show in the 59th minute when she snagged a turnover from North (5-4) near midfield, outraced the defenders the final 30 yards and beat Jauron to the left post. She left the game in the 60th minute for good.

“Caroline’s ability to play at that high level is her speed,” Maroons coach Jonathan Dreasler said. “Her composure, her energy is great. But she can keep the ball at her foot going 100 mph or no miles per hour. She has great pace and picks up her teammates around her.

"But when she is going like that, it is difficult to stop her.”

North coach Tyler Holle said his team knew exactly what Hazen was capable of. But he added when his team made mistakes with spacing or defending positions, a player like Hazen was going to make the Wildcats pay for those mistakes.

“(Hazen) was just able to find space, whether it was across our back line or if it was wide and we weren’t recognizing her,” Holle said. “We knew who she was, but we just weren’t communicating where she was in open space and she took advantage of it.”

For her part, Hazen said she was just trying to bring energy to the team.

“We wanted to be aggressive right from the beginning and everyone did a great job with that,” she said. “It is pretty early in the season right now and we are just finding our chemistry. But we’ve worked really well together the last few games.”

Dreasler echoed Hazen’s point about team play, especially after this performance followed a seven-goal outburst in a win over Galesburg on Tuesday.

Hazen was not the only one who was dangerous for the winners as Ramirez, Veto, Isabella Smith, Becca Cramer, Charlise Martel and Lu Veto also were strong on the offensive attack for the Maroons.

“I was really proud of the girls tonight. We’ve made some really good connections with our passing and it has set up our offense,” Dreasler said.

As for North, the Wildcats were stronger in the final 20 minutes of the game, putting five shots on goal in that time frame. The hosts best chance came in the 53rd minute when Layne Wright hit the top crossbar with a free kick from 25 yards out. Jauron finished with 13 saves.

“I am always proud of the effort. But we’ve started really slow on back-to-back nights now and we’ve given up early goals that put us in a hole,” Holle said. “We’ve done some good things offensively moving the ball even though it did not result in goals.”

Moline's Caroline Hazen (3) gets around Davenport North's Logan Brown (10) during their match at the high school Athletic Complex Wednesday, April 28, 2021, in Davenport.