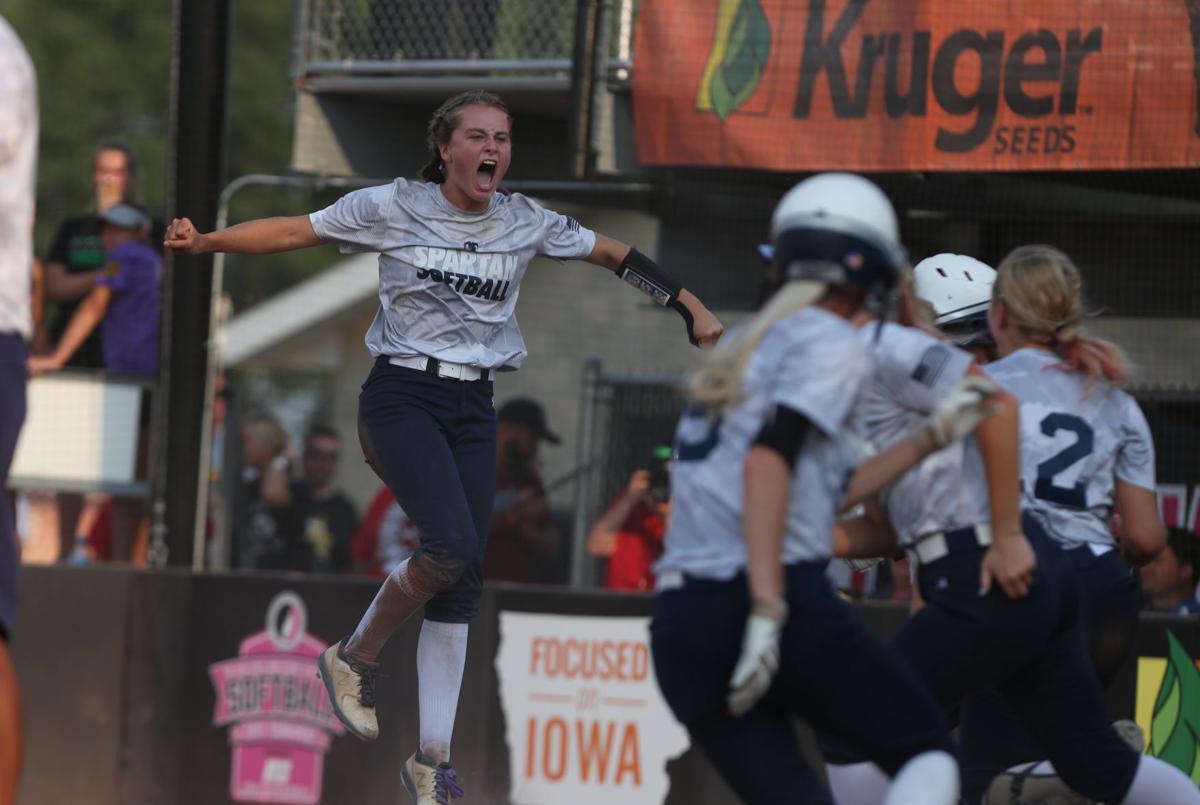 Reagan Hassel (10) celebrates after she was called safe at home, bringing in the winning run for Pleasant Valley in its 11-10 victory over Southeast Polk in a Class 5A state quarterfinal Tuesday in Fort Dodge. 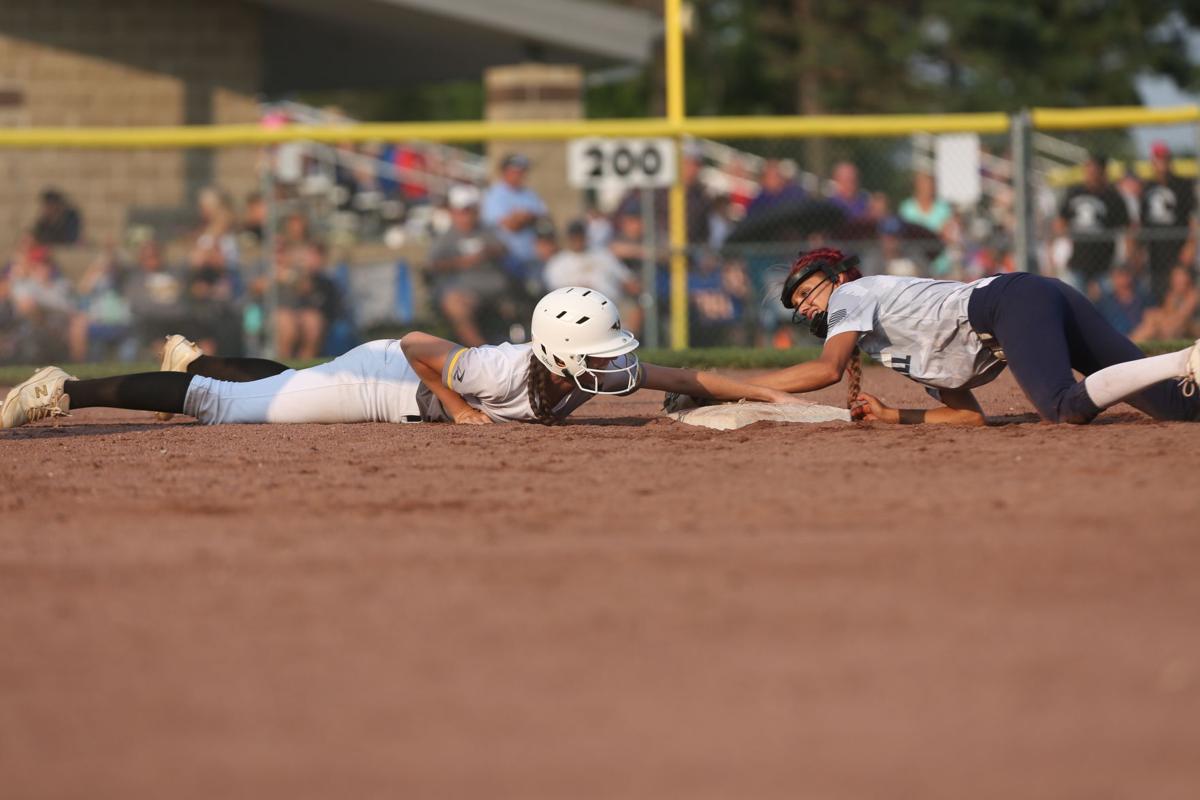 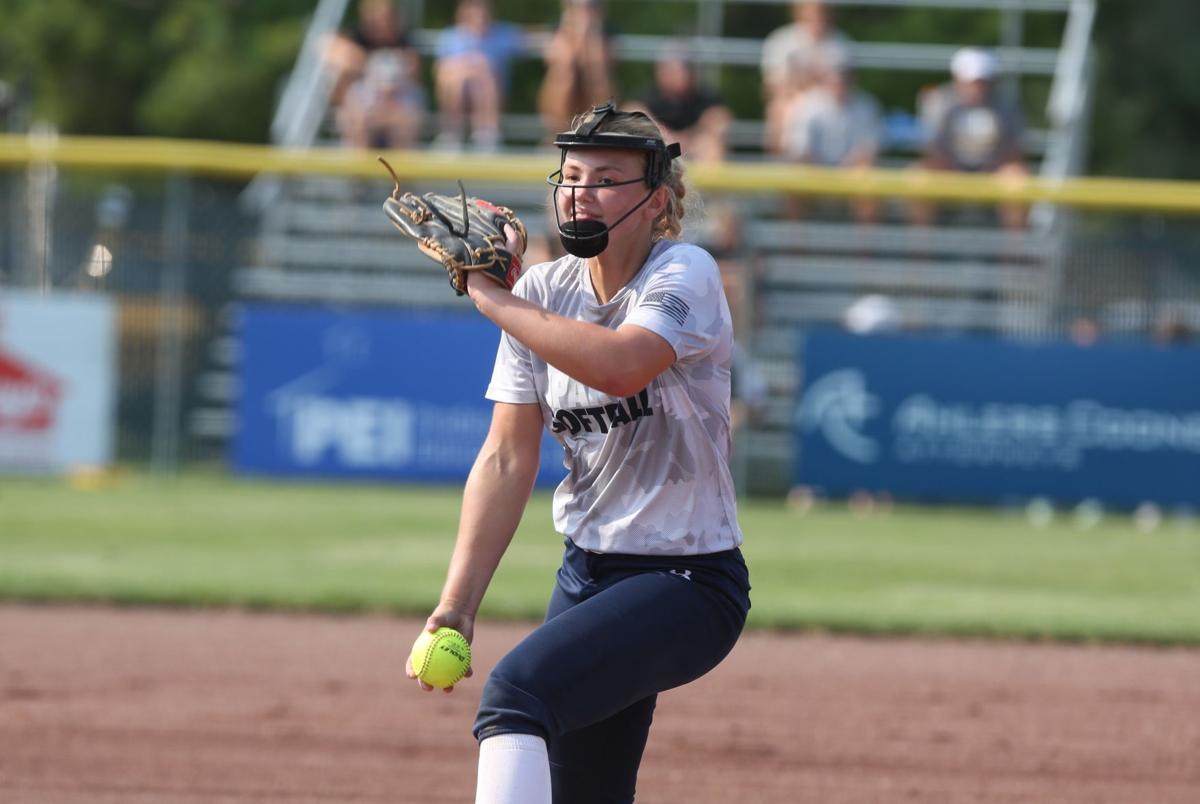 You can add clutch performer.

After the Spartans squandered an eight-run lead Tuesday evening at the Class 5A state softball tournament, Lindquist poked a single into right field to plate Reagan Hassel as fifth-ranked PV escaped with a wild 11-10 victory over 12th-ranked Southeast Polk at the Rogers Sports complex.

“I knew right away rounding third that I was going to score and make it happen,” Hassel said. “I’m really proud of Sophia for coming through.”

Hassel started the seventh with a single, her fourth hit of the game. Jessie Clemons sacrificed her to second base. Southeast Polk (21-19) elected to walk leadoff hitter Emily Wood with first base open.

Indianola did a similar thing three years ago in the state championship game and Lindquist made them pay. She did it again.

“It is always fulfilling when they (put) Emily on,” Lindquist said. “I know I can do it. They doubted me, but I know I’m able to show them that was a mistake.

“I felt relaxed, felt comfortable at the plate and I knew what I needed to do.”

As teammates rushed toward Lindquist to celebrate afterward, she was overcome with emotion.

“I was crying,” Lindquist said. “It was an emotionally draining game; I’m just happy it worked out the way it did.”

It was nearly catastrophic for the Spartans (34-7).

They jumped on the Rams for 10 runs in the first three innings.

Jessi Meyer had the big blow with a grand slam to right field in a six-run second. Otherwise, PV capitalized on erratic pitching from Southeast Polk starter Ellie Snetselaar, who walked three and hit two in 1 2/3 innings.

They scored three runs in the fourth, three more in the fifth and two in the sixth to draw even against starter Kaitlyn Drish and Lindquist.

Southeast Polk finished with 14 hits, with every spot in the lineup getting at least one.

“You’ve just got to keep grinding and keep making adjustments,” PV coach Jose Lara said. “We knew it was going to be a grind and we were going to have to battle. We expected them to hit the ball.”

“We lost a little bit of fire,” Hassel said, “but we started to gain that back up at the end because we knew we have won a lot of games like that this season.”

Lindquist held the Rams scoreless in the seventh to stem the tide.

“Once we got three outs in the seventh, we calmed down a little bit,” Wood said.

Lindquist, who will be done playing competitive softball after this tournament to focus on academics at the University of Iowa, finished them off.

It was her second hit of the game and her third RBI.

“Sophia is special to me, special to PV softball,” Lara said. “This team loves her. She’ll bend over backwards and run through a brick wall for this team. We wouldn’t be here without her.”

When Southeast Polk elected to pitch around Wood and take its chances with Lindquist, it didn’t bother Lara one bit.

“She’s a pretty dangerous hitter,” Lara said. “I wouldn’t pitch to her.”

As a result, PV is into the semifinals for the fourth time in six years. It will face Ankeny Centennial, a 2-0 winner over Iowa City High, at 7 p.m. Wednesday.

“For the last month, this team has been doing this,” Lara said. “They’ve been grinding and grinding. They’re giving me a heart attack, but they love to fight and they flourish in these moments.”

Reagan Hassel (10) celebrates after she was called safe at home, bringing in the winning run for Pleasant Valley in its 11-10 victory over Southeast Polk in a Class 5A state quarterfinal Tuesday in Fort Dodge.