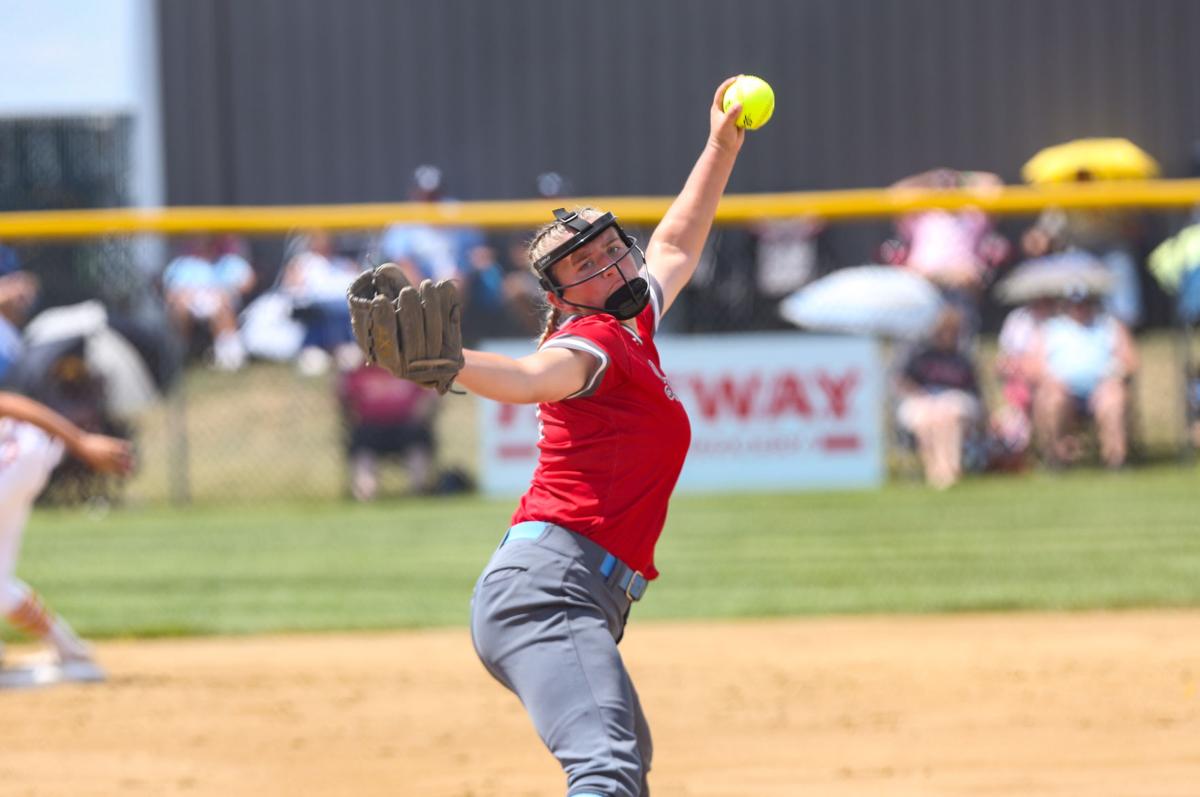 North Scott's Ryann Cheek fires a pitch during Wednesday's Class 4A state semifinal against Carlisle at the Rogers Sports Complex. 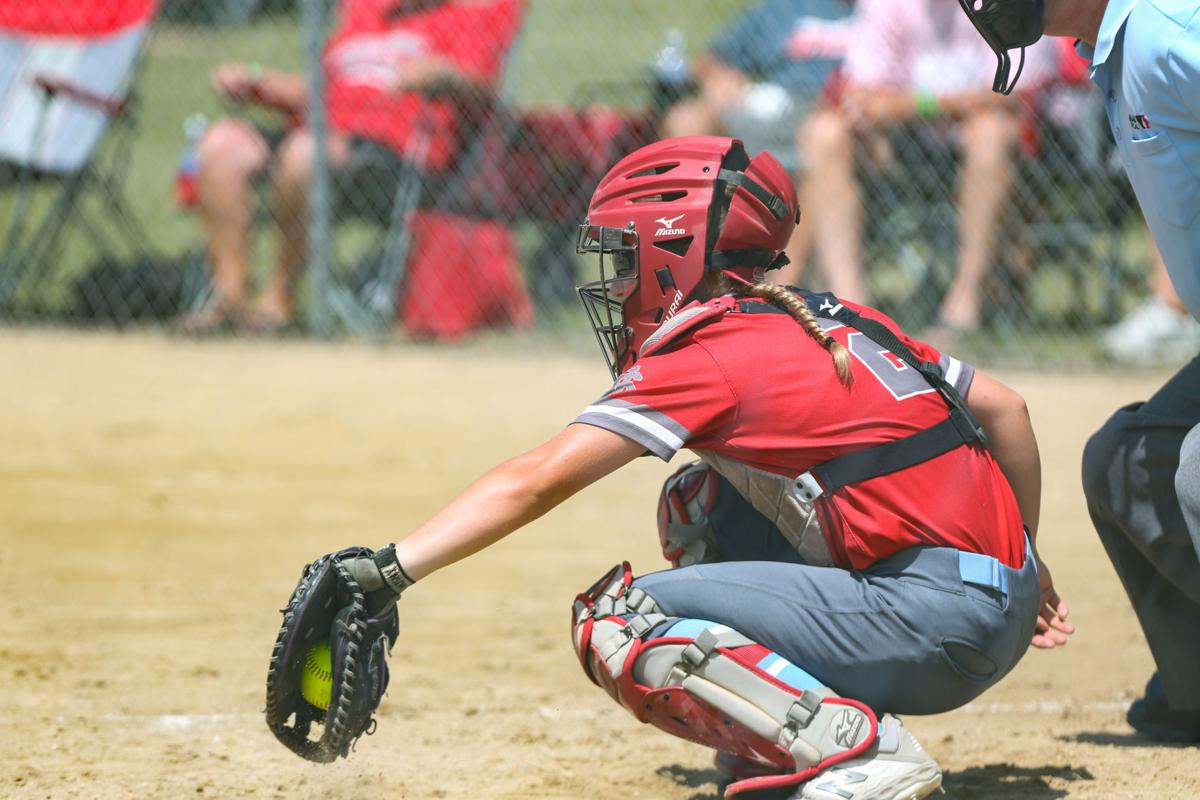 North Scott's Sam Lee catches a pitch during Wednesday's Class 4A state semifinal against Carlisle. Lee had three hits in the Lancers' 8-3 loss.

Carlisle capitalized on two infield errors, two walks and cranked two home runs for a seven-run fourth inning to knock off fifth-ranked North Scott 8-3 in a Class 4A semifinal at the Rogers Sports Complex.

“We didn’t put the band aid on,” pitcher Ryann Cheek said. “We didn’t stop the bleeding. One error turned into (two). One homer turned into another. It just spiraled out of control.”

This one stung a little bit more for the Lancers than last year’s 1-0 loss to Carlisle in the finals.

North Scott (17-10) was a year older, had been dominant in its last three postseason games and jumped out to a 3-0 lead before Carlisle came to bat.

“There was a lot of baggage there from the state tournament last year, but a lot of us seniors have been on the team for three, four or five years,” catcher Sam Lee said. “That definitely makes it a little bit harder.

“That was not us today. We’re a much better team than what we showed today. It just sucks.”

“We knew this was going to be a hard game,” North Scott coach Holly Hoelting said, “but we did truly believe we could get to a state championship again. But even the fact this season was even possible and we can still get third, that’s a big deal.”

North Scott pounced on Carlisle starter Molly Hoekstra in the opening inning. Lee continued her red-hot state tournament with a run-scoring double. Sydney Skarich added an RBI single, and a wild pitch brought in another run.

The Lancers, not for a lack of chances, wouldn’t push another run across. They stranded multiple runners in the fourth, fifth and seventh innings.

“We came out right away like we should, but I don’t know what our mentality at the plate was after that,” said Lee, who was 3-for-3 and has six hits in two games here. “It wasn’t there. We did not produce at all today (after that first inning). You have to hit with runners on base.”

Carlisle, meanwhile, made Cheek work early in the game. The southpaw never had a 1-2-3 inning against the Wildcats, and they had four different batters in the first three innings foul off multiple two-strike pitches.

“Very annoying,” Cheek said. “They definitely made me work hard. I’d get two strikes and they would battle them off until I gave them what they wanted.”

An infield error started the disastrous fourth for the Lancers. Then pinch-hitter Caylin Furnal, a freshman with just 15 at-bats, launched a two-run homer to tie it.

Then another infield error, a fielder’s choice, two straight walks, a two-run single and a three-run homer off the bat of Meredith Hoffman turned it into a five-run deficit for the Lancers.

“Defensively, that was very uncharacteristic of us,” Hoelting said. “Usually in big innings (for other teams), we’ll give up two, maybe three runs.

“They’re a big strong team, and when they put the ball in play, it goes far.”

When the Lancers didn’t respond the following half-inning, Hoelting knew the tide had turned.

“It is uncharacteristic for us not to bounce back and score right away,” she said. “The shift happened when we didn’t capitalize offensively after that.”

Cheek had two hits for the Lancers, who on Thursday will try for the program’s third top-three finish at state in the past 10 years.

“For me, it is going to be tough to step on the field after this,” Cheek said. “I know last year after the (title) loss, I didn’t want to leave my bedroom for two weeks. We’re going to have to regroup as a team and figure out how to get it done.”

FORT DODGE, Iowa — Pleasant Valley’s softball team did something no other opponent has done against Kaylin Kinney this summer.

FORT DODGE, Iowa — Davenport Assumption whipped Williamsburg on the road in the opening week of the softball season. The Knights smacked four …

FORT DODGE, Iowa — With an eight-run cushion, nobody on base and two outs in the seventh inning Friday afternoon, Louisa-Muscatine assistant c…

Knights hardly work up a sweat in three-inning rout

FORT DODGE, Iowa — The regional tournament was a stroll in the park for Davenport Assumption’s softball team. The Class 3A state tournament st…

Knights salvage third, set up for another title run in '21

FORT DODGE, Iowa — During the heyday of Dennis Johnson’s coaching tenure, North Scott was a fixture at the state softball tournament. From 198…

FORT DODGE, Iowa — It was a case of pick your poison.

FORT DODGE, Iowa — Neveah Hildebrandt has dealt with plenty of anguish and frustration in the past nine months.

North Scott's Ryann Cheek fires a pitch during Wednesday's Class 4A state semifinal against Carlisle at the Rogers Sports Complex.

North Scott's Sam Lee catches a pitch during Wednesday's Class 4A state semifinal against Carlisle. Lee had three hits in the Lancers' 8-3 loss.